Electricity market Fossil fuels
German utilities say plans to cut 22 millions tonnes of CO2 emissions from the energy sector by demanding additional emissions trading allowances from older power plants amount to an exit plan for the brown coal industry. But despite concerns over the legality of the proposal, the energy ministry insists the package is a “minor intervention”.

A government proposal that would make Germany’s older power plants pay for carbon emissions exceeding set levels linked to their age is meeting resistance from plant operators and trade unions. The “national climate contribution” outlined in a paper by the Ministry of Economic Affairs and Energy, which could cost operators of old lignite and hard coal-fired power stations several million euros annually, has also drawn criticism from within Energy Minister Sigmar Gabriel’s own Social Democrat Party (SPD), while legal experts question its compatibility with EU law and the German constitution.

“For units which produce power above the CO2 allowance, there is an incentive to decrease production but not to entirely mothball the power station,” the ministry paper says.

In an interview Gabriel stressed that only the oldest lignite-fired power stations would be affected. Still, of the 78 coal-fired power station units (with a combined capacity of 34.1 GW) owned by the four big utilities E.ON, RWE, EnBW and Vattenfall, only 13 will be less than 20 years old in 2017, when the Climate Contribution regulations would come into force. 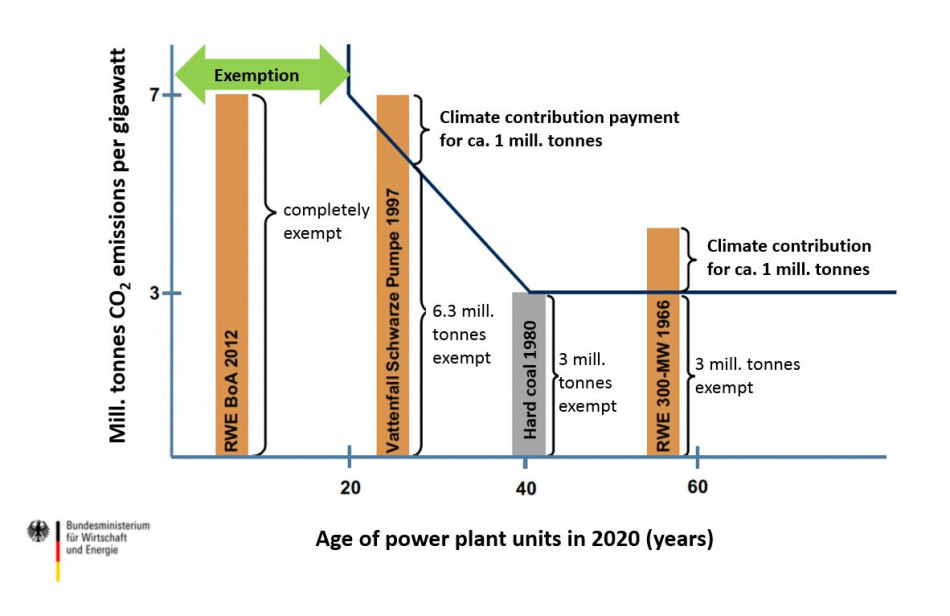 RWE, one of Germany’s largest utilities, says that the proposal “would introduce a total exit from lignite in the short run.” The energy provider, which operates 25 lignite and five hard coal-fired power stations in Germany (20 of which are more than 20 years old), said old coal-fired power stations would not be able cover their operating costs if their output was limited or subject to this level of financial penalty, forcing closure.

RWE also calculates that the plan would force 70 million tonnes of the greenhouse gas emissions cuts – far exceeding the target of 22 million tonnes and placing too heavy a burden on utilities. Up to 100,000 jobs in the lignite industry and related sectors were at stake, RWE and trade union IGBCE warned.

The Energiewende – Germany’s transition to low-carbon economy while simultaneously phasing out nuclear power – has seen the share of renewables in the energy mix soar. But in recent years, the country also saw a rise in CO2 emissions. In a bid to get back on track for its 2020 target of cutting emissions by 40 percent on 1990 levels, the government unveiled its Climate Action Programme in December 2014. The programme included a reduction of emissions from the energy sector of 22 million tonnes – on top of some 37 million tonnes already projected from measures such as the increase of renewable sources and energy efficiency – but was criticised for lacking detail on how this would be achieved.

Now, a new package of reforms including the climate contribution has been suggested by Gabriel’s ministry in agreement with the Chancellor’s Office, setting out concrete measures. These include a limit of 7 tonnes of CO2 per gigawatt capacity, per year, on plants over 20 years old, to be reduced further for older plants, down to 3 million tonnes for a 41-year-old station. Operators of plants exceeding these limits would be liable for a “climate contribution” equivalent to 18-20 euros per tonne of CO2, to be paid in European emissions trading system (EU ETS) allowances.

Hannelore Kraft, state premier for North Rhine-Westphalia’s, Germany’s most populous state and an industrial hub that is home to all of RWE’s power stations, shares the utility’s concerns.

“The jobs in the Rhenish mining region and in energy-intensive industry must be saved,” Kraft told the Westdeutsche Allgemeine Zeitung, adding that fellow Social Democrat Gabriel’s proposal “may need revising.”

Gabriel responded to her comments on national television, saying, “we have spoken about this… and that’s why we will not have a coal exit”. Gabriel said that emissions from the power sector currently amounted to over 349 million tonnes per year, meaning that a reduction of 22 million tonnes by 2020 was a “very, very minor intervention.” After a meeting between Kraft and Gabriel on Monday, Gabriel said that his concept and the underlying data would be checked again and talks would continue.

The reform package could also have a silver lining for utilities in the form of a capacity reserve. Operators would compete at auction for their plants to become part of the reserve, exiting from the electricity market and providing power only in case of shortages. But according to a paper seen by the Clean Energy Wire, the reserve would consist of just 4 GW, not more than the capacity of eight larger power station units.

A legal national addition to a European tool?

While fearing that the new climate contribution will force German carbon reductions on too large a scale, RWE also argues that connecting the mechanism to the European emissions trading system would mean that overall, no CO2 is saved at all. If entire plants would be decommissioned, the EU ETS allowances they would have otherwise have purchased would simply be used elsewhere and emissions be shifted abroad, RWE reasons.

The government thinks differently. By tying the national climate contribution to the EU ETS, “it is ensured that the national measure will also lead to European emission reductions,” the proposal says. Every tonne emitted in excess of the new national limit for older power stations would be paid for with EU ETS allowance equivalent to 18-20 euros – exceeding the rate of a single allowance for a tonne of emissions. In 2014 the average allowance price was 5 euros/tonne CO2. Therefore, the ministry argues in its paper, “more EU ETS allowances will be demanded and retired so that the high surplus of allowances [in the EU ETS] will be decreased a little.” However, because of the large surplus of emission allowances in the market – currently over 2 billion allowances – there will be no effect on the overall price for allowances, the proposal says.

But it is not only RWE that has doubts over the compatibility of the two tools. Independent legal experts are also concerned. “The instrument could be seen as an additional burden which is contrary to the European system,” Matthias Lang a lawyer specialising in energy told the Clean Energy Wire.

The ministry paper says other European countries have chosen similar approaches. The UK established a national carbon price floor in 2013, and Sweden’s carbon tax supplements the EU ETS. Lang says that in demanding extra ETS allowances from the plant operators, the German state could be in contravention of its own national regulations. “The prohibition on expropriation in the German constitution forbids the government to withdraw property without giving a compensation,” but here the state helps itself to the utilities’ emission allowances without reimbursement, Lang explains.

So far, the reforms remain in the proposal state and have yet to be approved by cabinet, following which they are to be debated by parliament before being passed into law.