Factsheet
The future use of coal is at the centre of Germany's political debate on the energy transition and its efforts to mitigate climate change after the country has seen a stagnation in greenhouse gas emissions despite growing use of renewable sources. At the moment Germany is still the biggest producer of brown coal but closed down its last hard coal mines in 2018. If the government follows up on the proposal of its multi-stakeholder coal commission, the last coal plants and lignite mines could close in 2038. This factsheet compiles background information on the lignite and hard coal industry in Germany. [Update: Germany no longer world's largest lignite producer] 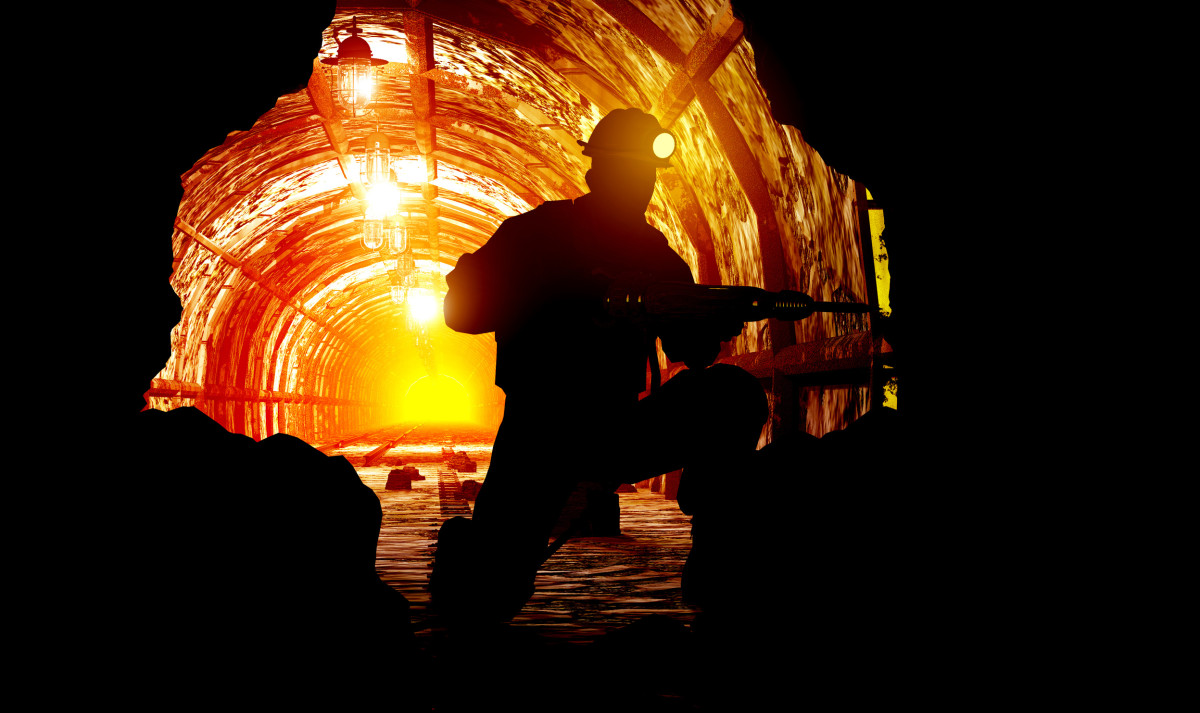 Power generation from coal has long served German industry, and despite Germany’s reputation as an ecological role model, the cheap, carbon-intensive fossil fuel is still an important pillar of the country’s power supply. Hard coal and lignite have a share of 35.3 percent in German power production (compared to 35.2% from renewables, 11.7% from nuclear and 12.8% from natural gas in 2018). Altogether, the energy sector is responsible for a large share of Germany’s greenhouse gas emissions (37 percent).

A phase-out of coal power is at the heart of debates on how Germany can reach its climate targets, particularly after the Ministry for Environment warned in autumn 2017 that the country was falling short of its 2020 emissions reduction target by a wide margin. In February 2019 a multi-stakeholder coal exit commission set up by the energy ministry suggested a pathway to a phase-out of the fossil fuel by 2038. The proposal now has to be written into laws which have to be passed by parliament.

The post-war economic boom in Germany (Wirtschaftswunder) was fuelled by hard coal mined in the states of North Rhine-Westphalia and the Saarland, which powered the industries of West Germany. But hard coal has since lost its competitive edge. As of December 2018, Germany doesn’t have any domestic hard coal mining left. Instead, coal is imported from Russia (50%), the United States (17%), Australia (13%) and Colombia (6%), followed by Poland, Canada and South Africa (2021 data).

Of the 83 billion tonnes of hard coal still in the ground in Germany, 36 million tonnes are considered mineable, but their extremely deep and complicated geological location makes mining too costly to compete on the world market. The average cost for mining one tonne of hard coal in Germany is 180 euros; the price for imported hard coal was between 86 and 96 euros per tonne in 2017.

Because of this hard coal mining has been subsidised by the state since the 1960s. The sector has received 337 billion euros between 1970 and 2016, according to Green Budget Germany (FÖS).

In 2007, the federal government together with the state governments of North Rhine-Westphalia and Saarland agreed with mining company RAG and trade union IG BCE to phase-out hard coal mining subsidies in Germany by 2018. The RAG foundation was established to ensure that subsidies will be discontinued in a socially acceptable manner and to cover the costs for "perpetual mine management" and restoration of mines.

The last two remaining hard coal mines in North Rhine-Westphalia closed down in 2018.

According to the Federal Institute for Geosciences and Natural Resources (BGR), there were 9,640 people employed in hard coal mining (2015).

Germany used to be the largest lignite producer in the world since the beginning of industrial lignite mining. However, China overtook the country and production today far outstrips that in Germany. The softer and moister lignite (also called brown or soft coal) has a lower fuel value than hard coal and is not mined below ground but in opencast mines. It also is more CO2 intensive than hard coal.

So far, opencast lignite mining has altered 179,490 hectares of countryside in Germany. Since 1924, 313 settlements have been lost to lignite mines in Germany.

Lignite mined in eastern German Lusatia (Lausitz) and Saxony-Anhalt was indispensable for the industries of the former German Democratic Republic (GDR, or East Germany). 136 villages were lost to mining expansion in Lusatia alone. After reunification in 1990, many mines and power stations were closed within a few years as they were not profitable anymore.

In western Germany, the use of lignite from the Rhenish mining district has a century-long tradition and once fuelled the rise of power company RWE.

Today, unlike hard coal, the remaining opencast lignite mining operations are still a profit-making business, with most of the coal being used in power stations that are close to the mines.

There are three working brown coal mining districts left in Germany, the Rhenish district in North Rhine- Westphalia (NRW), the Lusatian district in Brandenburg and Saxony and the Central German district in Saxony and Saxony-Anhalt. The mines are operated by MIBRAG, LEAG, RWE and ROMONTA.

Find a CLEW factsheet on the three lignite mining regions in Germany here.

LEAG announced in 2017 that it would not further extend its opencast mines in Jänschwalde and declared a three-year moratorium for the expansion of the mines in Welzow-Süd. The company cited adverse political developments as the reason for this decision. Because of it three villages with 900 inhabitants will escape demolition.

In NRW – traditionally another stronghold for coal mining in Germany – the state government decided in March 2014 to cut future lignite production by 1.3 billion tonnes, saving 1,400 people from relocation, with mining set to continue until at least 2030. A new government elected in 2016 said that it would use brown coal as a bridging technology but honour the existing mining permissions.

The BGR reported 15,906 employees in the lignite mining business in Germany in 2017. Other figures by coal association DEBRIV report 20,851 employees in the mines and lignite-fired power stations as well as revegetation of former mines, by the end of 2018. A 2017 report by consulting agency Arepo Consult for the Green Party counted 13,680 jobs in lignite mining.

Since 1990 investment in coal power stations in western Germany has been reduced in favour of eastern Germany, where many plants needed refurbishing. Therefore, plants in the east have longer run-times ahead.

In the years between 1990 and 2010, lignite and hard coal-fired power blocks with a combined capacity of some 9.5 gigawatts (GW) came online, according to data from the grid regulator.

Nearly 25 GW were retired (15.8 GW lignite; 8.3 hard coal) according to figures from the Federal Environment Agency (UBA) (based on units with a capacity of 30 megawatts or more).

After 2011, when Germany decided once and for all to phase out nuclear power, a total of 6.7 GW of coal capacity came into service while coal plants with a capacity of some 3.8 GW were retired. Since planning and construction of a coal-fired power station takes at least three years, capacity added after 2011 had been planned before the accident in Fukushima, Japan – the event that led to Germany’s final nuclear phase-out policy.

The possibly last new hard coal unit ever built in Germany may come online in 2020: Uniper’s Datteln 4, with a capacity of 1,055 MW, after years of legal struggle with local environmental organisations.

According to energy industry association BDEW, there are also plans for a combined hard coal-biomass-hydrogen plant with a capacity of 1,000 MW by Dow Chemical in Stade. The BDEW also lists RWE Power as seeking permission for a new lignite unit at Niederaussem (BoAplus, Block L) which could start running in 2022.

The Federal Network Agency (Bundesnetzagentur) lists 2.3 GW of hard coal capacity to be retired by 2020. This figure only includes the officially announced retirement plans of the power station operators and may rise due to further retirement announcements. After 2021, another hard coal block with 0.3 GW is to be closed down. By 2019, 0.75 GW of lignite capacity will be transferred into the so-called security reserve, another small lignite unit (51 MW) will be permanently retired in 2020, according the network agency. The data (on all power stations larger than 10 MW) is available at the German Network Agency (Bundesnetzagentur). 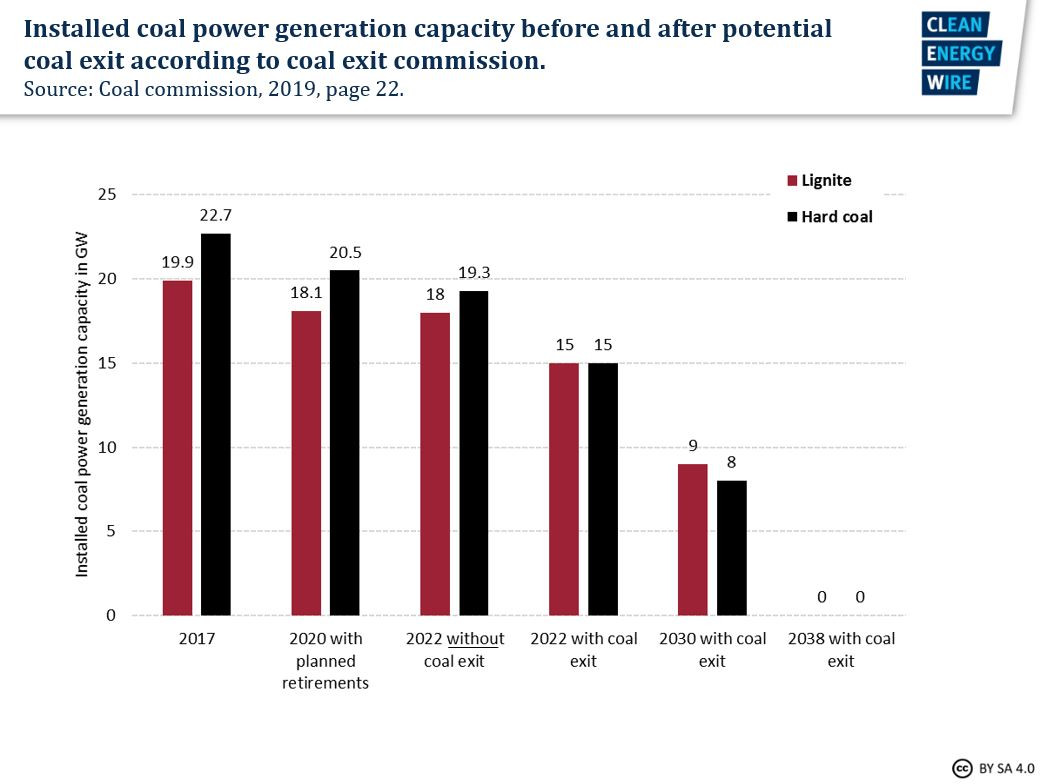 German lignite plants make up seven out of Europe’s 10 biggest polluters, according to an analysis of European ETS data by climate NGO Sandbag. 55.3 percent of ETS emissions in Germany came from coal power plants in 2016, the data shows.

Why power from lignite still flourishes

The share of power from lignite fell from 31.1 percent in 1990 to 22.5 percent in 2018. Since 2005, the contribution to gross power generation from lignite has remained largely stable at around 2-24 percent. Renewables contributed 35 percent in 2018, up from 29 percent in both 2015 and 2016, according to the AG Energiebilanzen. Thus lignite remains the second most important power source in Germany.