The projected rise in CO2 prices in Europe could see coal-fired power plants being replaced by gas plants in Germany, thereby saving millions of tonnes in greenhouse gas emissions and helping the country to achieve its energy transition. But as cleaner power plants and consumers stand to benefit from emissions trading, Germany’s steel industry sees extra costs mounting. Some experts warn that a German coal exit could muddle the impact of the carbon price or lead to gaps in power plant capacities depending on its timing.

The price of European Emission Allowances (EUA) has been hitting record highs almost every week since the beginning of the year, and researchers now predict that within the next five years this increase could trigger a switch from coal-fired power generation to gas in Germany.

A CO2 price of 40 euros per tonne (€/t) in the early 2020s would save 23 million tonnes of CO2 emissions in Germany, Mark Lewis, head of research and managing director at Carbon Tracker Initiative, estimates in a new report.

The report is fuelling an ongoing debate about an end-date for coal-fired power generation in Germany, which is heating up as the so called "coal commission" is to present the details of such a phase-out by the end of the year.

While NGOs celebrate that the long defunct European carbon trading scheme is finally having a little influence on the CO2-intensity of power stations operated in Germany, industry representatives today warned in their own report that higher carbon prices in combination with an accelerated coal exit could lead to high costs for both industry and households. If EUA prices and costs for electricity were to rise further, the steel industry would be in “existential danger”, Hans Jürgen Kerkhoff, president of the German Steel Federation told the Clean Energy Wire. 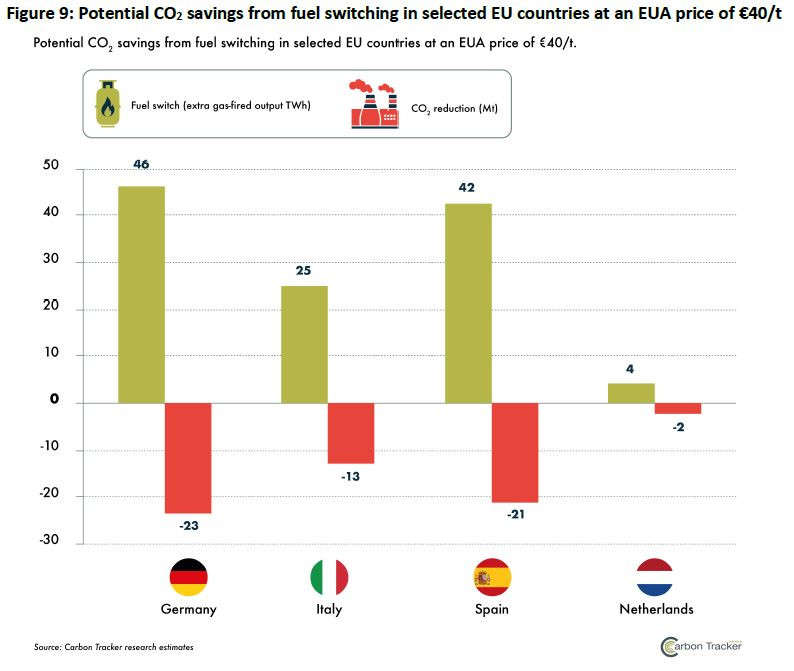 According to Carbon Tracker, the price of CO2 allowances, which are traded under the European Emissions Trading System’s (EU ETS) cap-and-trade scheme for emissions from power plants, industry, and aviation businesses, could average 35-45 euros per tonne between 2019 and 2023.

With prices as low as five euros per tonne of CO2 emissions in previous years, the ETS for the first time began to actually send a price signal to emitters in 2018, when trading picked up and has now driven prices to an unprecedented 18.5 euros per EUA.

It is already clear that Germany’s power mix will be affected by this upward trend in EUA prices.

Carbon Tracker calculates that at a price of 40 €/t of CO2 in 2021 and 35€/t in 2022, coal-fired plants could be replaced by gas-fired ones, which emit less CO2 per kilowatt hour. This could help Germany achieve its goal of replacing fossil and nuclear energy with less CO2-intensive and renewable sources under its Energiewende (energy transition) policy.

According to consultancy Aurora Energy Research, the ETS could even have an effect on which power plants will generate the bulk of Germany’s electricity (currently lignite plants) before a proper “fuel switch” from coal to gas is initiated. This would happen because lignite and hard coal-fired plants have much higher fixed operation and management (O&M) costs than gas-fired plants, which means that they are reliant on long run-time hours and that more expensive power stations are the ones that set the price in a ‘merit order’ (see a factsheet explaining ’merit order effect‘). “This way the CO2 price can lead to emission reductions even before coal is entirely replaced by gas,” Hanns Koenig, from Aurora Energy Research told the Clean Energy Wire.

“Even today, we see that the cheapest gas plants are now on par with, or even a little bit cheaper, than the most expensive hard coal plants,” Koenig said.

Effect on power prices for households and industry

Because of this, the wholesale power price in Germany has risen in the past months from an average of around 30 euros to around 50 euros per megawatt-hour.

In the complicated system of taxes and levies which, together with the wholesale price for electricity on the market, make up the German power price for consumers, this could benefit households, yet spell higher costs for industrial power users.

For households, costs could fall as the renewables surcharge - which is calculated as the difference between wholesale prices and guaranteed payments to renewable facilities - decreases with rising market prices for power. Industrial users, who are often exempt from paying the renewables surcharge, will not benefit from this effect. “However, in the end we have to see if power suppliers are going to factor-in the increased wholesale price,” Koenig said.

Germany’s steel industry which is a major power user and obliged to buy CO2 allowances under the ETS, says that an EUA price of 25 €/t in Germany would cause extra costs of at least around 3 billion euros between 2021 and 2030. “The significant increase in the power price will add to this,” German Steel Federation president Kerkhoff, told the Clean Energy Wire. “The competitiveness of the steel industry compared to countries outside of the European Union is put into existential danger,” Kerkhoff said. The steel industry would need free allocation of CO2 allowances to a degree that would ensure its international competitiveness as well as a compensation for power price increases due to European emissions trading.

Other energy-intensive industries in Germany, namely the chemical industry, remain vocal proponents of a CO2 price, but also warn that a global system would be favourable to ensure competitiveness and that national measures are to be avoided.

The 2018 “stunning performance” of the EU ETS had been driven “by the market’s anticipation of the start-up from January 2019 of the Market Stability Reserve (MSR), the centrepiece of the EU ETS reform agreed last year,” Mark Lewis writes for Carbon Tracker.

The MSR is intended to reduce the oversupply of allowances on the market. “Investors and users are for the first time thinking that there could be a scarcity in the coming years, and that the EUAs will have a value in the future,” Hanns Koenig from Aurora Energy Research told the Clean Energy Wire.

Since EUA prices are so strongly driven by “what market participants believe” and politics, predicting their future development is notoriously difficult, Koenig said. But, just like Carbon Tracker, Aurora Energy Research also concludes that the European carbon price is going to increase – albeit slowly – over the coming years and may reach 32 euros per tonne (in real terms) by 2030. “The biggest uncertainty is how quickly this rise will happen.”

Enough gas-fired power plants to take over from coal?

National measures aimed at reducing emissions in addition to the ETS cap and trade system, are also replete with uncertainties against the backdrop of a constant increase in CO2 emission prices.

As Germany is set to specify an end date for coal by December, could such a move flood the market with additional allowances and thus lower the prices again? “In short, a German coal phase-out could have a negative effect on EUA prices, but obviously it all depends on how much capacity is taken off and when,” Mark Lewis told the Clean Energy Wire.

As of 2023, countries that decide on shutting down their fossil power plants will also be able to take emission allowances out of the market to avoid an oversupply in EUAs due to such national measures – yet they will also need to make use of this option.

A German coal phase-out would likely affect the period beyond 2023, Lewis explained, as Germany would probably not shut down many of its coal and lignite plants during the early 2020s as its nuclear power plants are scheduled to go offline in the same period.

If Germany were to shut down significant coal capacities during the same time, it could even be faced by a shortage of capacity in the power sector, Hanns Koenig said.

In contrast to a regulated coal exit, a fuel switch triggered by a rise in the EUA price would make the transition smoother, Koenig explained. Security of supply would not be endangered because while Germany’s gas power plants would become the main drivers of the system, coal-fired plants wouldn’t just disappear. However, in the long run, and if coal-fired plants are shut down for good, Germany would have to make sure that enough new power sources are added to the system in time to replace them. And a key question is: who would build these plants without capacity payments in place? Koenig asked.