In the media: Fracking restricted; a 100% renewable world

The German government has published a law proposal regulating the use of fracking for gas and oil exploitation. Fracking will be banned in all protected areas and wherever drinking water resources could be endangered. So-called unconventional fracking, less than 3000 meters below ground surface, will only be permitted for research purposes if an expert panel considers the drill harmless and all necessary licences from water authorities and other state agencies are obtained. Environment Minister Barbara Hendricks questioned the need for fracking in Germany. “The answer to our energy issues is not fracking but renewables and increased energy efficiency,” she said at a press conference.

See the press release from the BMUB in German here.

The German government’s proposal to reduce emissions from the power sector with a carbon levy would have a much lower impact on power prices than similar policies in the UK, according to British non-profit organisation Sandbag. While the UK “Carbon Price Support” will add 10 to 22.50 euros per megawatt-hour (MWh) to the wholesale price from 2015 to 2020, the German “Climate Contribution” proposal would add only up to 2 euros per MWh, according to the study. This is because the German levy would only apply to a small proportion of electricity production, whereas the British carbon tax is payable on all fossil generation. To achieve Germany’s goal to reduce emissions by 40 percent by 2020 relative to 1990 levels, the Federal Ministry for Economic Affairs and Energy proposed an extra levy on old power plants to save an additional 22 million tonnes of CO2.

Read the study in English here.

Read a CLEW report on the ministry’s proposal here.

Germany could switch its power system to 100 percent renewables within 20 years, according to an analysis by the Renewable Energies Agency commissioned by the Green Party. Such a shift “is ecologically necessary, technically feasible and ultimately also economically advantageous”, is the conclusion reached by the survey of existing scientific studies. But to enable this goal, the power system as a whole will have to become much more flexible – both on the supply and the demand side. The chairman of the party’s parliamentary group, Anton Hofreiter, criticises current policies in a preface to the study: “The government cements the status quo instead of understanding the opportunities offered by an ecological change and opening the door to a new, purely renewable energy world.” 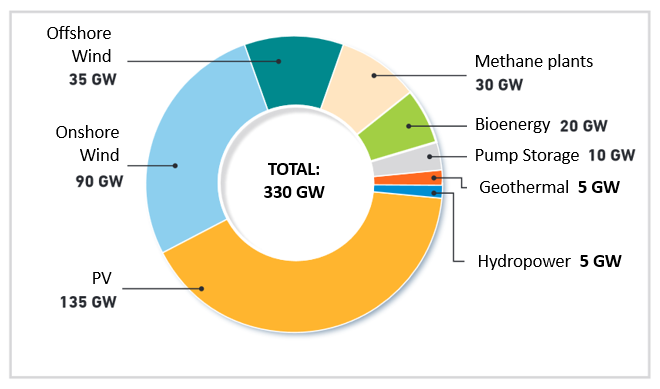 Germany and France agree closer cooperation on energy and climate

Germany and France have pledged to work towards an ambitious and effective climate and energy policy within the EU, according to a press release from the Federal Ministry for Economic Affairs and Energy. In a common declaration, they promise to live up to their responsibilities for the climate talks in Paris at the end of this year and the energy transition in Europe. “France and Germany make the  decarbonisation of the economy their top priority”, reads the declaration. The countries also stress the importance of regional cooperation for supply security, the further development of the power market as well as the integration of renewable energies.

The rate of new photovoltaic (PV) array installments has slowed in Germany, the Federal Network Agency has reported. In the past 12 months, 1,811 megawatt (MW) of new PV capacity was added, less than the 2,400 to 2,600 MW envisaged in the Renewable Energy Act.