In the media: Hypocrisy in the VW scandal; Merkel's push for climate action

“More companies are making their peace with the energy transition”

An increasing number of companies in Germany are supporting the country’s move to replace conventional energy sources with renewables, press agency AFP reports, citing a survey by industry organisation DIHK. Of the companies polled, 43 percent were in favour of promoting the energy transition, 24 percent (down from 34 percent in 2014) regarded the transition as negative. And 77 percent of participants said they were planning to increase the energy efficiency of their business.

“Exhaust scandal: the outrage about VW is hypocritical”

The outrage about VW’s exhaust test cheating is huge - among politicians, VW employees, customers and even by the competition, writes Thomas Exner in an opinion piece for Die Welt. But the German government is partially to blame for the scandal, he says. While Angela Merkel likes to present herself as a global model pupil in environment protection, her government has helped to create grey areas in EU legislation that make cheating in car testing possible. Not even consumers are free from hypocrisy, it seems. Despite listing efficiency and low fuel consumption as one of their main concerns when buying cars, the trend shows that more and more Germans are buying bigger cars with more horsepower, Exner writes.

The Federal Network Agency has published its latest power station list, including the envisaged additions and retirement of conventional power plant capacity in Germany in the period of 2015-2019. The agency expects 5,110 megawatt (MW) to be added, while 9,478 MW of conventional capacity is listed for retirement (2,686 MW nuclear and 1,208 MW lignite). The Federal Network Agency calculated in June that 4,750 MW would be added between 2015 and 2018 and 7,763 MW would be retired. (See graph below). 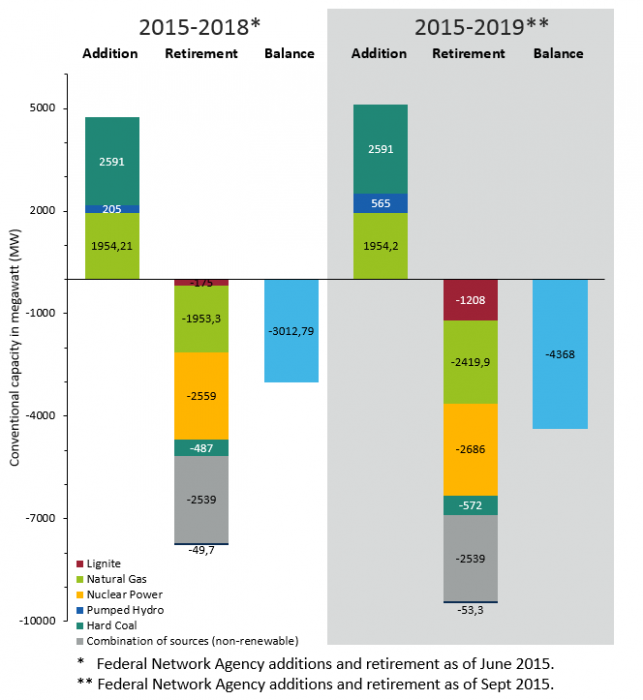 German companies regulated under the European Emissions Trading System (EU ETS) expect prices for CO2 allowances to remain lower than the 30 euros that would be needed to incentivise emission reductions, according to a poll by German development bank KfW and ZEW, Carbon Pulse reports. The 120 firms polled in the CO2 Barometer 2015 survey expect prices to reach 25.45 euros by 2030, which is below forecasts of EU policymakers, Carbon Pulse says. A total of 76 percent of participants said they had changed production processes to reduce emissions.

“The digger has to stop 400 metres away from the village”

Lignite digging in North-Rhine Westphalian Garzweiler has to stop 400 metres away from villages – up from the previous ruling of 100 metres - the state government decided last week. This means that the 1,500 people of Holzheim can stay in their homes and their village will also remain more than just an island in the middle of a massive open cast lignite mine, Guido Hartmann writes in Die Welt. Mine operator RWE is less pleased because the government’s decision means that it will extract 400 million tonnes less from the mine in Garzweiler than it expected. Other villages could now claim the larger distance from the mine too, Hartmann says.

“We need to accept the obstacles”

Germany’s environment minister Barbara Hendricks is very confident that governments will agree to a way of limiting greenhouse gas emissions in order to keep global warming under 2°C at the UN conference in Paris, she said during an interview with Handelsblatt. This is even if not all countries would sign a legally-binding climate treaty. Another central target of the negotiations was to agree on binding measuring and monitoring methods, Hendricks said. And it would be very important for a successful outcome in Paris that industrial nations kept their promises to finance climate change mitigation and adaptation in developing countries.

Read the interview in German (behind pay wall) here.

“And they are moving after all”

War, terror, climate change – for a long time it looked as if the United Nations was getting nowhere, writes Stefan Ulrich in the Süddeutsche Zeitung. But as China announces an ambitious environment programme, including an emissions trading scheme, things might be moving after all, he says. China’s president Xi Jinping has apparently stopped depicting China as a developing country in order to block climate action. In addition, Chancellor Angela Merkel and the Pope are calling on the heads of states and governments to commit to climate action ahead of Paris, Ulrich writes.

“United for a better world”

Chancellor Angela Merkel was probably watched even more closely than the Pope at the UN sustainability conference in New York, write Dagmar Dehmer and Barbara Junge in the Tagesspiegel. The spotlight was on her not only because of VW but also because of the energy transition, which is followed closely around the world, sometimes with enthusiasm, sometimes with “blistering rejection”. Merkel promised to increase Germany’s development budget to 0.7 percent of the GDP and reminded industrialised nations about their promise to pay 100 billion dollars into a green climate fund. However, her remarks about who will contribute this money remained vague, as she spoke about a joint responsibility of private and state funding, the authors say.