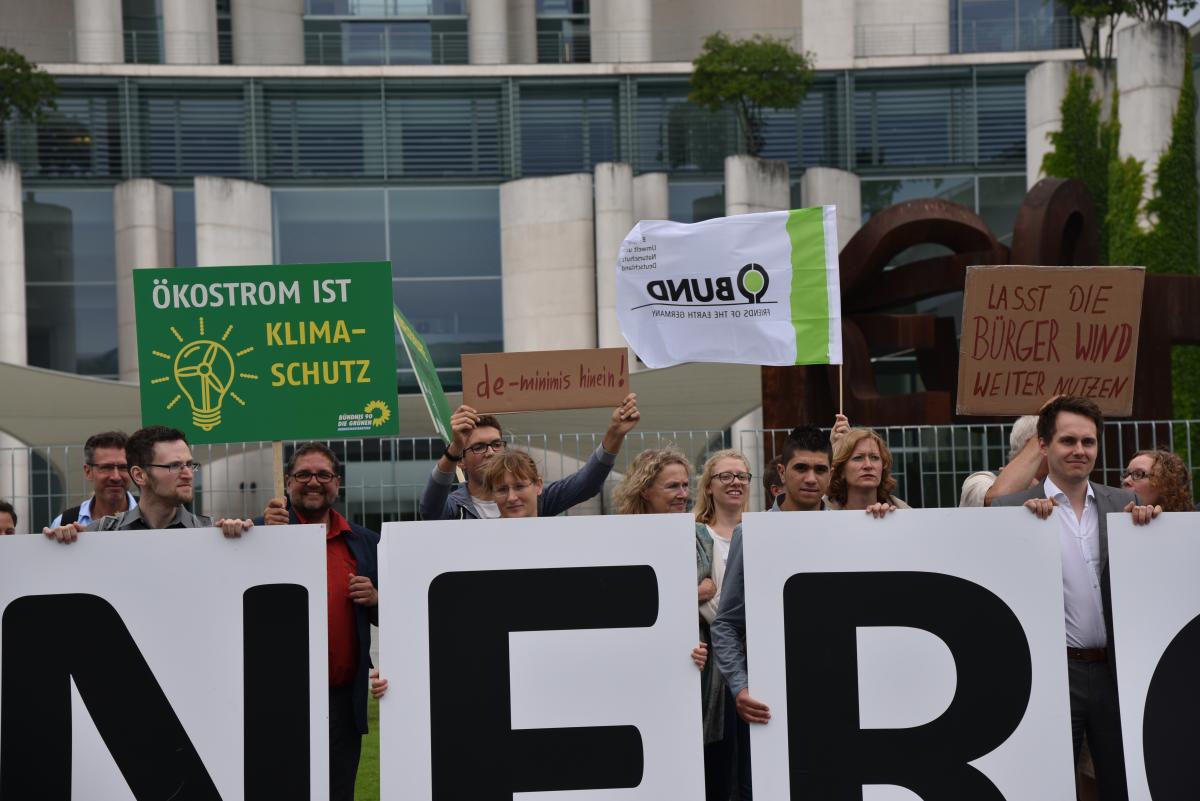 “Thousands protest in Berlin to save Energiewende”

Several thousand protesters mobilised by the renewables sector demonstrated against current government plans to reform the Renewable Energy Act (EEG) in Berlin, reports Recharge. The sector and green groups think the plans “endanger the country’s Energiewende,” writes Recharge. The protests came two days after Chancellor Merkel and state premiers agreed on key points of the EEG reform that foresees a change towards tenders in the renewable support system, and includes 2.8GW in annual onshore wind auctions and 600MW photovoltaic tenders a year.

See the CLEW article Wind development has to wait for grid expansion on the latest EEG reform plans.

Bavaria’s state premier Horst Seehofer has succeeded in securing 2.4 billion euros in support for biomass plants, writes Michael Bauchmüller in an op-ed for the Süddeutsche Zeitung. This is how much it will cost to support biogas plants for six years and while it’s probably saving the livelihood of many farmers, Seehofer’s CSU should keep quiet in the future when there is a debate about the high cost of the energy transition, Bauchmüller says. Biomass support should be tied to their ability to stabilise the power system, Bauchmüller suggests.

“Will power cost more in the south than in the north soon?”

Because of a lack of new power lines and high wind power input in the north of Germany, the country might be split into two power price bidding zones, Die Welt reports. Whether Germany is split into a cheaper northern and a more expensive southern bidding zone with up to 10 percent higher prices, depends on whether the grid expansion can catch up with the rapid increase in renewable energy, the article says. The EU Commission will give its recommendation on the price zones by the end of the year but it has already suggested that Germany should consider regional feed-in tariffs for conventional power plants to incentivise new plants in areas of too little power. The economy minister is trying to avoid a split by shaping “grid congestion zones” in which only a limited amount of new wind power will be permitted.

“Uniper gets 5 billion euros in first financing since E.ON spin-off”

Uniper signed contracts for 5 billion euros in loans in its first outside borrowing since the spin-off from German utility E.ON was announced, writes Bloomberg. Creditors are J.P. Morgan, Deutsche Bank and Uni Credit. “We’re seeking a comfortable investment grade rating," Christopher Delbrück, the chief financial officer of Uniper, told Bloomberg. “That means at least a notch better than today.”

See the CLEW dossier on utilities and the energy transition.

EU should ban fossil-fuelled cars from 2025

The EU is falling behind in its climate ambition and has ignored the message from the Paris Agreement, writes Hans-Josef Fell, president of Energy Watch Group, in a guest article for the Frankfurter Rundschau. Renewables are booming in other countries while investment in the EU has decreased by 21 percent in 2015. The EU must secure the exit of coal and the divestment from fossil industries and tackle the transport sector with a targeted support of electric and hydrogen technologies. Fossil-fuelled motors should be forbidden by 2025, Fell says.

“Power consumption: from the refrigerator in North Rhine-Westphalia to the energy mix in Europe”

To further the comparability of data concerning the energy transition in Germany and Europe, the Fraunhofer Institute for Environmental, Safety, and Energy Technology (Fraunhofer UMSICHT) provides a collection of maps on its website maps4use. Every month, the institute publishes a new set of maps in different regional resolutions on subtopics such as the share of renewables in gross power consumption in European countries or power consumption of German household appliances.

Find the press release in German here and the collection of maps on maps4use.

A system model by the Forschungstelle für Energiewirtschaft, an energy research group, has shown how different kinds of storage, e.g. power to heat, electric mobility, stationary batteries, pumped hydro and power to gas, could be used when planning the long-term development of power storage for flexibilisation of the energy system.

Find the results of the project in German and an executive summary in English here.