“80 percent renewables are not a problem”

There is much more flexibility in the German power grid to cope with renewables development than currently needed, said Boris Schucht, CEO of transmission system operator 50Hertz in an interview with Tagesspiegel. “The idea that the integration of renewable energy immediately calls for more system flexibility [is] a myth. We have much more flexibility in the system than we need. […] it will last until 2030 or even 2040.” Schucht is confident that 50Hertz will be able to integrate 70 to 80 percent of renewables “without additional flexibility options” in the future. He said that the company had for the first time succeeded in February to use wind power as control power to balance out generation and consumption.

See the CLEW dossier The energy transition and Germany’s power grid and the CLEW factsheet Set-up and challenges of Germany's power grid.

“A platform for new talents turns 30”

Germany’s Ministry for the Environment turns 30 today. It has been a platform for new political talents, climate scientist Hans-Joachim Schellnhuber, from the Potsdam Institute for Climate Impact Research (PIK), tells the Handelsblatt. Many former environment ministers, among them Chancellor Angela Merkel and Vice Chancellor Sigmar Gabriel, have become more powerful after having held the office. But the ministry is currently weak, having had to surrender the field of energy policy to the economy ministry, according to former environment minister Jürgen Trittin (Green Party). German industry associations say that the ministry fails to explain how the decarbonisation of the country’s economy will affect the different sectors apart from the energy sector, author Silke Kersting writes.

Michael Vassiliadis, the influential head of the miners’ and chemical workers’ union IG BCE, opposes the view of environmental groups and politicians that Germany will have to increase its climate actions in order to fulfil its obligations under the Paris Agreement, writes the Frankfurter Allgemeine Zeitung. The Paris Agreement and the G7 climate targets were completely within the boundaries of Germany’s current climate ambition, he said. Vassiliadis is sceptical of the new Climate Action Plan 2050 that is due to be decided on by government in summer 2016. He warns that high costs for green power support could overburden businesses and society. He also claims that too much regulation of the future heating or transport system would lead to a “high-end version of GDR planned economy”, the article says.

“Better forecasts for power feed-in from solar and wind”

Fraunhofer Institute for Wind Energy and Energy System Technology (Fraunhofer IWES) introduced a new demonstrational platform that allows transmission system operators (TSOs) to better anticipate the exact amounts of wind and solar power fed into the grid. “We better combine weather and power forecasts and adapt them to the needs of the TSOs,” said Malte Siefert, project leader at Fraunhofer IWES. The platform allows the operators to test new forecast tools live in the control room. These tools calculate, for example, how much power is fed-in at individual network nodes and show information on the reliability of the forecast. 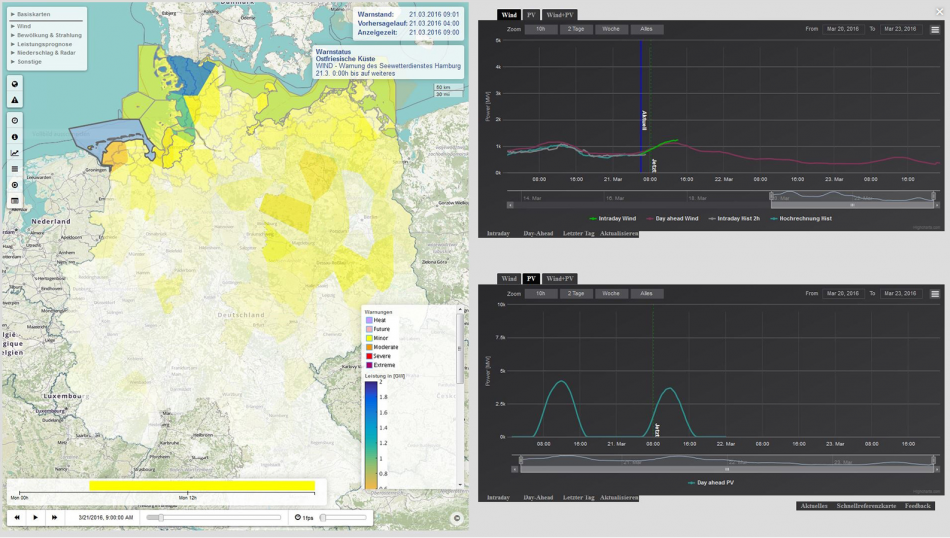