Delay in power grid extension / 'E.ON about to restart'

The construction and completion of important power lines in Germany will be delayed by at least three years, writes Michael Bauchmüller in Süddeutsche Zeitung. The main reason for the delay is last year’s decision by the federal government to preferably put new direct current transmission lines underground, according to the Federal Network Agency (BNetzA), which published its first quarter grid development status report online. The additions to the grid were supposed to be completed when the last nuclear power plants are shut down in 2022, to transport electricity from Germany’s windy north to the industrial south. But many power lines are now scheduled for completion in 2025, according to the report.

Read the report by BNetzA in German here. 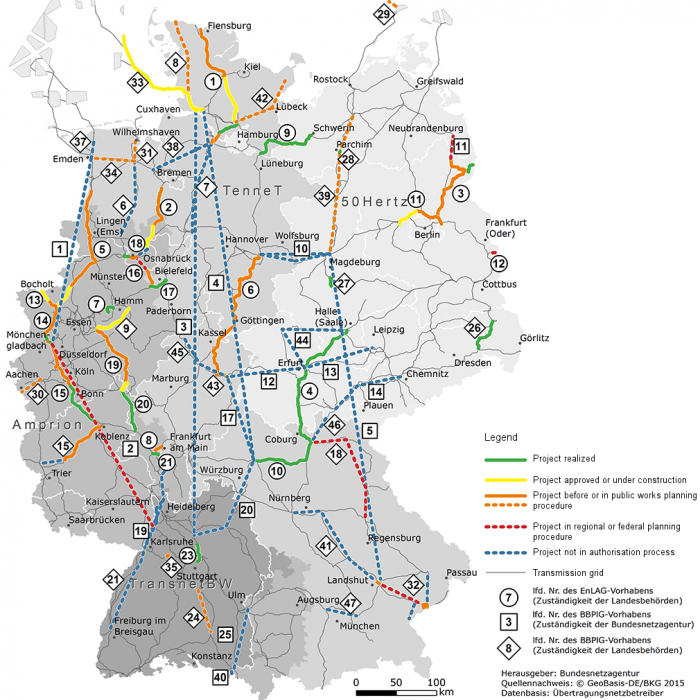 “E.ON about to restart”

E.ON invested hundreds of millions of euros into splitting the company, but could not foresee how fast business conditions would deteriorate, writes Helmut Bünder in a commentary in Frankfurter Allgemeine Zeitung. “The collapse of power prices ruined the plans. Instead of investing in wind farms and photovoltaic, E.ON must save money. The path will be longer and more difficult than envisaged,” writes Bünder.
E.ON shareholders will vote on the split at the company’s annual general meeting on Wednesday.

E.ON’s balance sheet provides sobering reading, writes Jürgen Flauger in business daily Handelsblatt. “The split is not happening at a time of strength, but during the worst crisis in the company’s history.” E.ON’s major strengths are its large customer base and a respectable renewable portfolio, according to Flauger. He says the company’s major weaknesses are the expensive split and the uncertain costs of the nuclear exit.

Read the article in German (behind paywall) here.

Car manufacturer Renault cuts the discount it gave so far for its electric car model Zoe and keeps the government incentives for itself, instead of passing it on to the customer, writes Die Welt. Rather than making the model 2,000 euros cheaper – half of the premium – Renault kept the price at the same level. The federal government had decided on a 4,000 euro buyer’s premium for e-cars at the end of April.

The Federal Network Agency has announced the framework conditions for the fifth solar PV auction period in Germany. At 125 megawatt (MW), the tendered volume is the same as in the previous round. Bids for projects on farming land are not possible, however, because the quota for 2016 is already used up. A maximum price is set at 11.09 cent per kilowatt-hour.

Find out more in the CLEW factsheet EEG reform 2016 – switching to auctions for renewables.

“Environment and sense of proportion”

It is a positive development that ever since Helmut Kohl’s chancellery there is a minister in the cabinet that specifically watches over environmental pollution and climate protection, writes Heike Göbel in an op-ed for the Frankfurter Rundschau. But the “excessive ambition” of incumbent minister Barbara Hendricks to achieve a carbon-neutral society by 2050 will harm the foundations of Germany’s economy, Göbel warns.

German environmental group Deutsche Umwelthilfe (DUH) wants to force the city of Berlin to partially ban diesel cars because of excessive nitrogen dioxide levels. The group sued the city in court because the poisonous gas NO2 exceeded EU limits at all measuring points with traffic nearby. It said Berlin must take "appropriate measures" to reduce emissions, such as limiting car and lorry traffic, and increasing support for public transport and cycling. “The Berlin Senate doesn’t dare to challenge the powerful car industry by banning dirty diesel cars in the city,” said DUH head Jürgen Resch.
The group sues various cities in Germany and has had some success, according to an article on Spiegel Online. In the state of Hesse, a local court threatened to fine the environmental ministry if it did not improve air quality in two cities.

Electrification and automation are huge challenges for the car industry, but German companies seem well prepared, according to a study by the Cologne Institute for Economic Research (IW). Since 2010, German companies have registered 58 percent of all patents related to automated driving. Study author Hubertus Bardt warns that IT companies such as Google and Apple could threaten the dominant position of German carmakers. But the acquisition of map company HERE and several carsharing initiatives show German carmakers are taking on the mobility transition, argues Bardt.