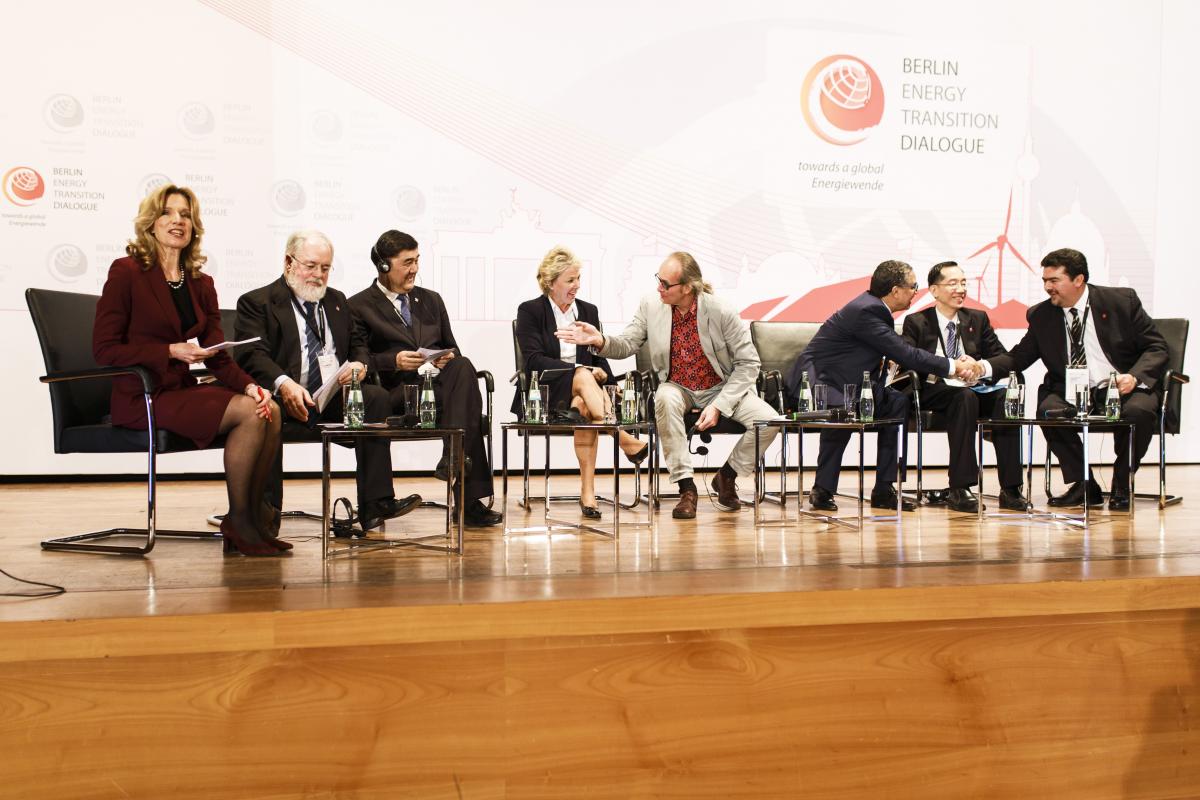 Panel Participants at the Berlin Energy Transition Dialogue 2017. Photo/BSW
Over 1,000 ministers, officials, business people, energy experts and journalists from around 90 countries take part in the third Berlin Energy Transition Dialogue, a two-day confernce hosted by the German Foreign Ministry. The following is a collection of comments by the participants. [Updates day 2]

“It’s no secret that Germany is no frontrunner when it comes to electric vehicles. But change is becoming visible.”

“The question no longer is if, but when alternative engines start to take over and the combustion engine ends up in the museum.”

“The farewell from coal and gas has long begun (…). The Paris Agreement is just the beginning, not the end.”

“Europe used to be the biggest region for green investment, now Asia has moved into that position.”

“India is very serious about its renewables and solar targets. The worry is that they will have rapidly increasing electricity demand and coal is very competitive there, so we could end up in a situation where both coal and renewables will grow significantly. India therefore is an important example in terms of what happens to emissions worldwide.”

“We thought that if you go green, you need to subsidise. But it’s the opposite.”

“There are a lot of low-hanging fruits that we can capture in efficiency, demand side management and so on (…). There will be lots of job creation just by going down that road.”

“We shouldn’t talk about phasing-out fossil fuels – it’s more of a competition. But we will tackle fossil subsidies.”

“Theres’s talk about 100 percent renewables in 2045 in California.”

“Electricity is regulated at the state level in the US (…) Regardless of political parties, people across the US want to move towards clean energy.”

“In Europe we need to find a way to exit coal (…). If renewable energy is to reach the space it has to reach, we need to give it that space.”

“We have to decarbonise everything that cannot be electrified.”

“Without a carbon price, we will not see action by (…) steel companies, by concrete companies (…)to seize the opportunities that technological progress has to offer.”

“If money can’t find a home in renewables now – what’s going to happen in ten years’ time, when interest rates will have picked up again?”

“The biggest companies in the world are energy companies - and we need them to go into renewables. And how are we gonna do that? We need to tax their business models.”

“My biggest concern as a European is the German automobile industry. They’ve blocked the electric transformation for a decade.”

“The German car sector seems determined on offsetting the emissions reduction progress in other sectors.”

“Germany’s car industry is only playing on transition. Out of a one billion euro advertising budget, only 4 percent are spent on advertising electric vehicles.”

“Dieselgate has killed the market for diesel outside of Europe.”

“We need confidence on a global level that the transport transformation is an opportunity rather than a problem.”

“Electrification of vehicles is not the sole solution – if Beijing, for example, was all e-cars, we would have clean congestion there.”

“Improving the availability of sidewalks is the cheapest way of making transport infrastructure investments for a city.”

“Oil and gas reserves have allowed Netherlands to become lazy when it comes to decarbonising transport.”

“Fiscal policy is what brought up electric vehicles’ share in the Netherlands – rising demand creates pressure on producers.”

“In China, there are six million coal miners – that’s equal to Denmark’s population.”

“I hope that, by 2050, two thirds of energy supply in China can come from non-fossil sources.”

“There is one tool that’s more powerful than regulation, and that’s business models that are attractive to consumers (...) We need to enable businesses to provide compelling services. If we unleash the consumer, we can unleash change much faster than we can imagine. If you get the consumer, you get the investors.”

“Investors in renewables keep saying ‘please show me one model that works without feed-in tariffs’.”

“The energy transition is the biggest business opportunity there is.”

Rainer Baake, State secretary in the Economy Ministry of Germany

“The renewables’ share in Germany has been going up and up while emissions stalled. And this is due to the failure of the European Emissions Trading System.”

“The energy transition is possible and it is affordable. It is of utmost importance that we look at the transition not as a burden, but as on opportunity.”

“We need a real efficiency revolution in all sectors, otherwise we will not be able to make this an economic success story.”

“Industrialised countries are no longer those who advance renewables expansion the most.”

“Sustainable energy provision is also a question of international security and justice.”

“Energy transition can make the world safer and fairer.”

“A marginalised idea that used to be smiled at has become a global future trend.”

“Initially, it was all about increasing the share of renewables. Now we’ve got to look at the system as a whole and keep an eye on costs – renewables have to take on greater responsibility.”

Nur Bekri, Director at the National Energy Administration of China:

“We want to go on on an energy transition path with Chinese characteristics.”

"China’s CO2-emissions will peak as soon as possible.”

“The market is a very important driver to keep [China’s energy transition] competitive and flexible.”

“We have to rely on private companies’ and enterprises’ capabilities.”

“We’ll have to reinforce international cooperation and exchange to face obstacles and difficulties [in energy transition].”

“Energy transition no longer is a rich man’s game – it’s become available for all.”

“The business case for renewables never has been stronger.”

“We’re fortunate that Germany presides the G20 at this important juncture of energy provision; I can tell you its achievements are a big source of inspiration for many countries around the world - although of course simple copy and paste is not possible.”

“That’s what we do – we get our hands dirty with data.”

“Showing [climate] leadership is doing our own homework.”

“[The EU] did not increase its climate targets after the Paris Agreement because they already are the most ambitious.”

“We do not provide any subsidies, since we believe in right pricing. But we’re going to introduce a carbon tax that represents the costs [caused by CO2-emissions].”

“Intermittent power sources [like wind and solar power] need to be priced for the burden they put on the [electricity] system.”

Lisa Davis, Member of the managing board at Siemens AG:

“Energy transition has caught its own momentum (…). I don’t see policy in the US to change that (…). Renewables won’t be detoured by policy.”

“[We have to] balance the needs and capabilities of all countries to make this happen. Every country and region needs an individual approach.”

“The more you have market forces and consistent rules, the more this will encourage investments.”

“The technology is there – we have everything to move forward fast.”

“Renewables used to be expensive. They now have become standardised mass products.”

“Baseload is a concept of the past (…) We have to lower barriers for demand side management.”

“We need to switch to a solution-driven rather than a problem-driven paradigm and replace depression with optimism.”

“The population wants to have leadership instead of management (…) They want a clear 20-year vision that explains why it is necessary.”

“It has become more important to be logical than ecological – even for climate change deniers, more efficient solutions can be appealing.”

“We need to make participation in energy transition trendy, fashionable, and exciting.”