Saarland election first test on road to next Energiewende government 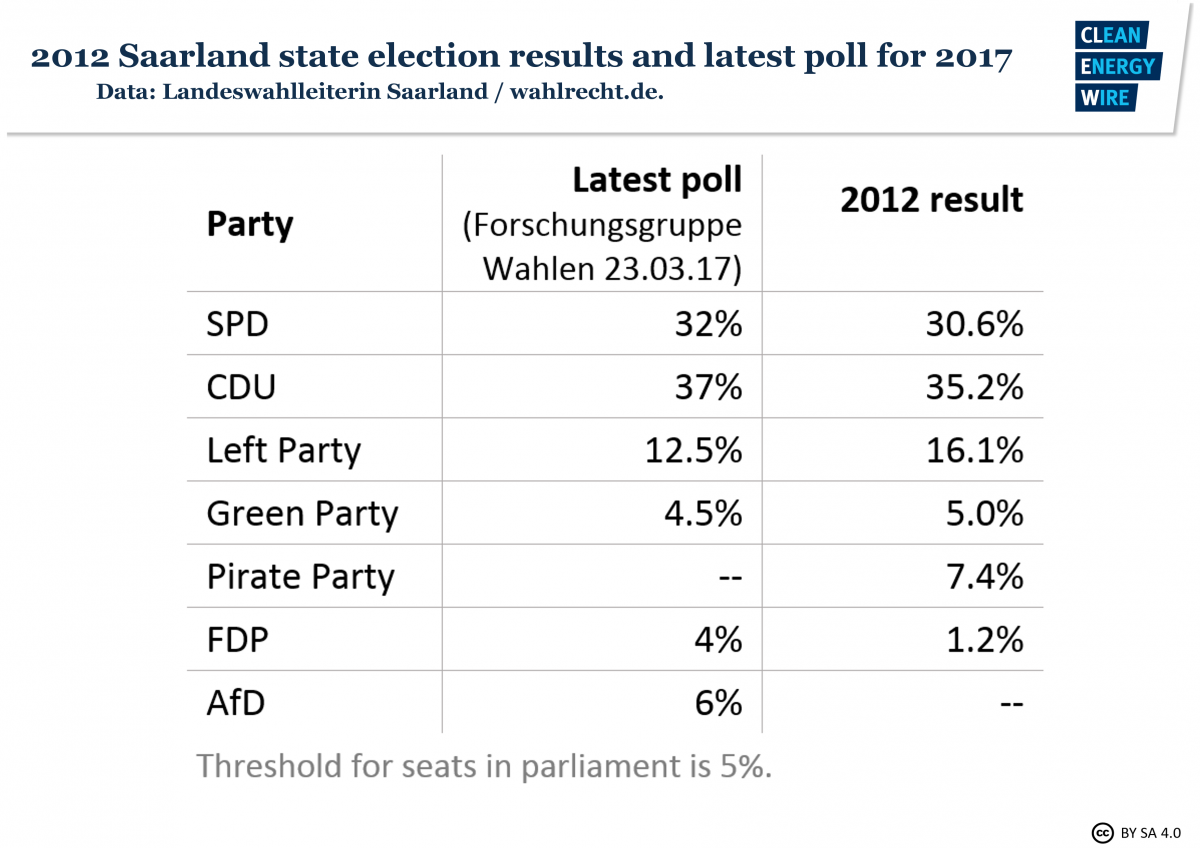 2012 Saarland state election results and latest poll for 2017. Source - Landeswahlleiterin / wahlrecht.de 2017.
All eyes are on the federal state of Saarland kicking off Germany’s election year on 26 March. An otherwise unremarkable campaign started to engage national politics when the Social Democrats put forward their new federal election frontrunner Martin Schulz, who bolstered his party in national and state polls and opened up new coalition options. Although energy and climate policy are unlikely to affect the vote's outcome, observers say Saarland's new government might well serve as a template for the next national Energiewende government.

“All of a sudden, it’s unclear whether the grand coalition of Christian and Social Democrats in Saarland can continue,” political scientist Arne Jungjohann told Clean Energy Wire. “We might as well see a left-leaning coalition by the SPD and the Left party [dubbed red-red, due to the parties’ colours] or by both of them complemented by the Green party,” [dubbed red-red-green] Jungjohann explains.

Until recently, the upcoming election in the federal state of Saarland seemed to have little influence on the future course of Germany’s energy transition. But the Social Democrats' (SPD) nomination of former European Parliament president Martin Schulz as their frontrunner for the federal elections in September led to a surge for the party in national and state polls.

The so-called “Schulz-effect” makes the election a first test for possible coalitions on the federal level and thus the next "Energiewende government". Like at the federal level, Saarland is currently governed by a grand coalition of Germany's two largest parties, the conservative CDU and the SPD. 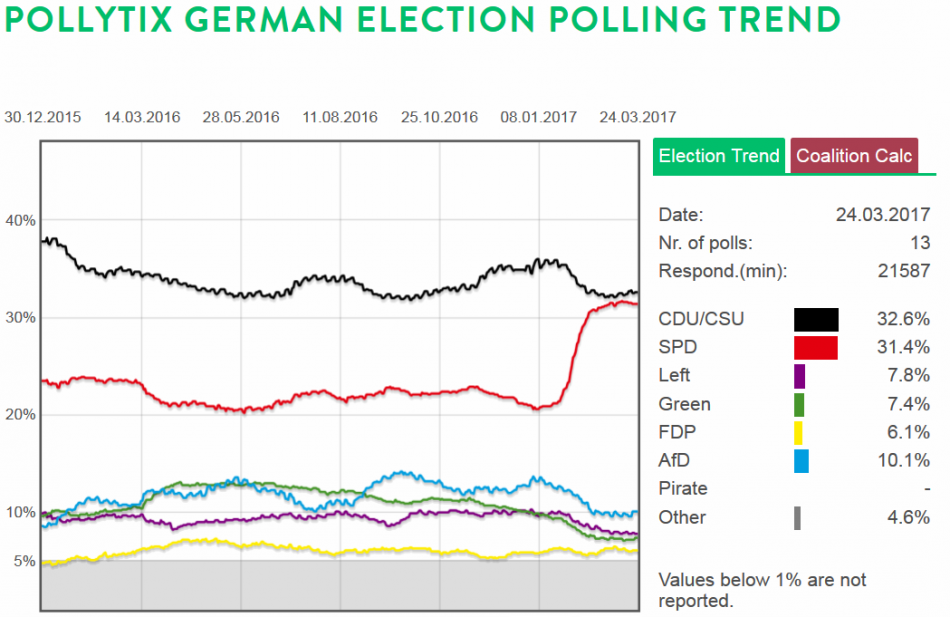 If the Saarland SPD managed to take government leadership away from the CDU, this would have two important implications for the federal level, Jungjohann explained: “First, it would show that forming a red-red or red-red-green coalition under SPD leadership is possible,” he said. If the numbers add up in September, this constellation might well serve as a template for Berlin, he said.

Tipping the Bundesrat majority “to the left”

The second implication is the effect of Saarland’s coalition colours on the Bundesrat, the council of federal state governments. “The majority in the Bundesrat could be tipped further to the left by a government excluding the CDU,” Jungjohann told Clean Energy Wire. This meant one of Germany’s legislative bodies could become more adverse to conservative energy and environment policies, according to Jungjohann. If the Greens formed part of Saarland’s next coalition, they would co-govern in 12 out of 16 federal states, “making them a very attractive partner on the national level – if they make it in Saarland,” said Jungjohann.

The Green Party, currently polled at 4 percent in Saarland, is still fighting to make the threshold to enter parliament in the first place. With 53 percent of the population entitled to vote still unsure if and who to vote for, the ability of parties to mobilise groups at the last minute is a decisive factor, according to German pollster Forschungsgruppe Wahlen.

If the Green Party was part of a future federal government, energy and climate would inevitably be back on top of the agenda for coalition talks, Nick Butler recently pointed out in the Financial Times. The federal Greens published a first draft of their election campaign programme that showed the party is determined to make climate protection and “ecological modernisation” the central issues of their election campaign.

Campaign disputes in Saarland – a small state once heavily dependent on hard coal mining with only around one million inhabitants – are mainly focused on education and spending policy.

Voters see questions of unemployment (19 percent), education (17 percent), and refugees/asylum (15 percent) as the most pressing challenges, according to Forschungsgruppe Wahlen.

Saarland’s economy today is dominated by the automotive and steel industries, with two of the state’s 10 largest employers being steel businesses and six car manufacturers or suppliers. The latter must prepare for the farewell of conventional engines, which could have significant impact on jobs and growth for the state. Ford just announced that it would invest 600 million euros in its location in Saarland, which it called “a clear commitment to Germany as the most important location in Europe”.