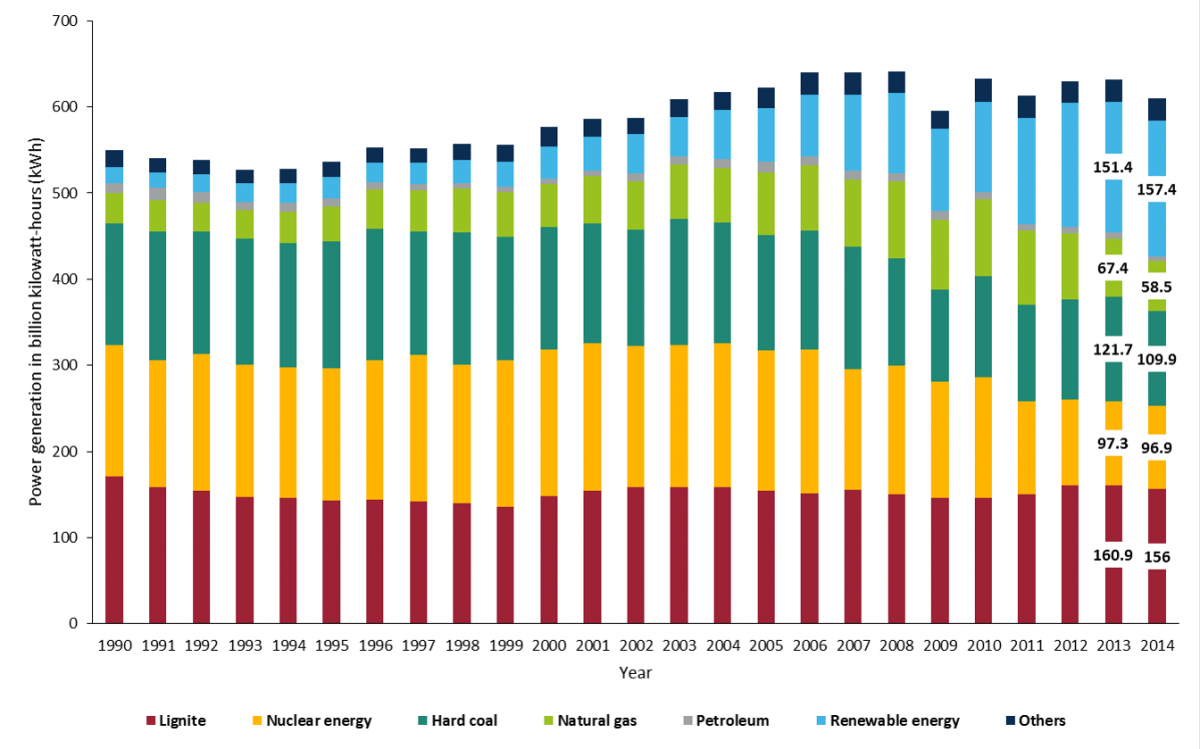 Overall power generation in Germany decreased in 2014 compared to 2013. Data: AGEB, 2014.
The latest figures on Germany’s energy consumption and electricity generation for 2014 suggest that the country’s recent rise in greenhouse gas emissions could be coming to an end. 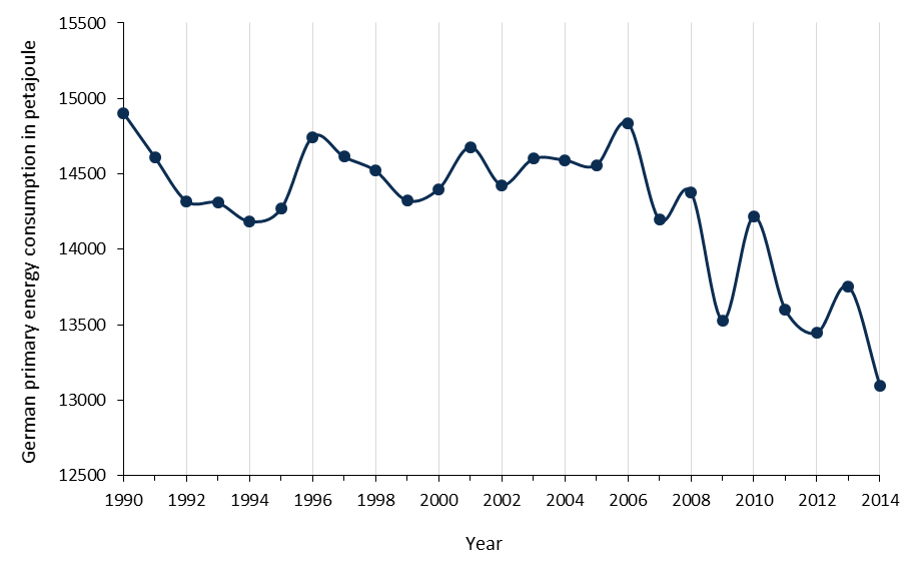 Primary energy consumption decreased by 4.8 percent compared to 2013, the AG Energiebilanzen (AGEB) indicates with provisional 2014 statistics published on their website on Wednesday. Ajusted figures that take into account mild weather early in the year, put energy consumption 1 percent lower than in 2013.

Primary energy consumption includes the energy used in power generation, heating and transport, and accounts for the energy export balance.

The AG Energiebilanzen anticipates a fall in CO2 emissions of around 5 percent compared to 2013, as consumption of all fossil fuels fell and there was a slight increase in the contribution from renewables (Figure 2). Half of the CO2 savings came form power generation, the AGEB said in a press release. Corrected for the mild weather, CO2 emissions were down by 1 percent due to reduced use of fossil fuels in energy production, the researchers calculated.

The drop comes after several years of rising emissions that have cast doubts over the Energiewende - the ambitious plan for a simultaneous phase-out of nuclear power and transition to a carbon-free economy. 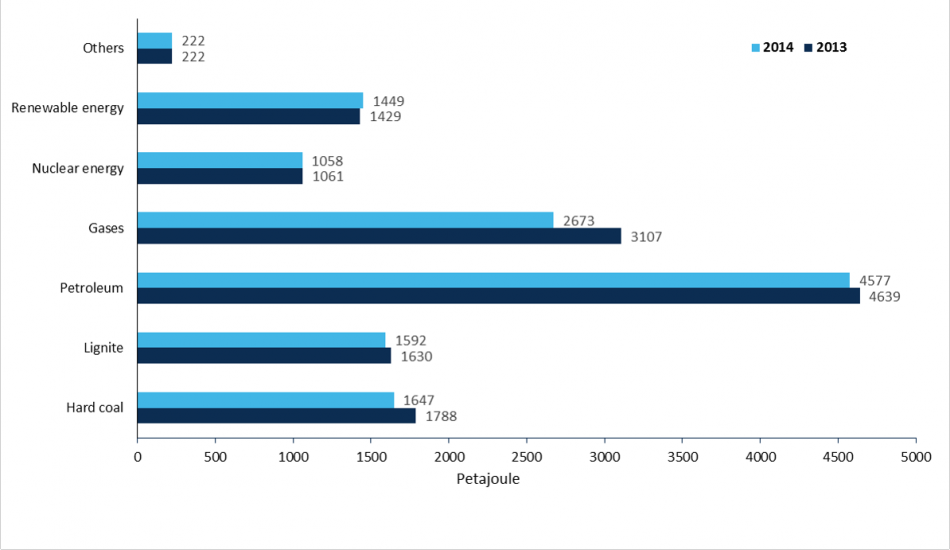 Germany's use of hard coal in electricity generation was down 7.9 percent, and lignite was down 2.3 percent, compared to 2013. The researchers attribute falling coal consumption to the rise in renewable power sources. Due to the overhaul of several plants, electricity generation from lignite-fired stations fell by 3 percent. The share of fossil fuels in the overall energy mix fell to 80.8 percent compared to 81.9 percent in 2013. 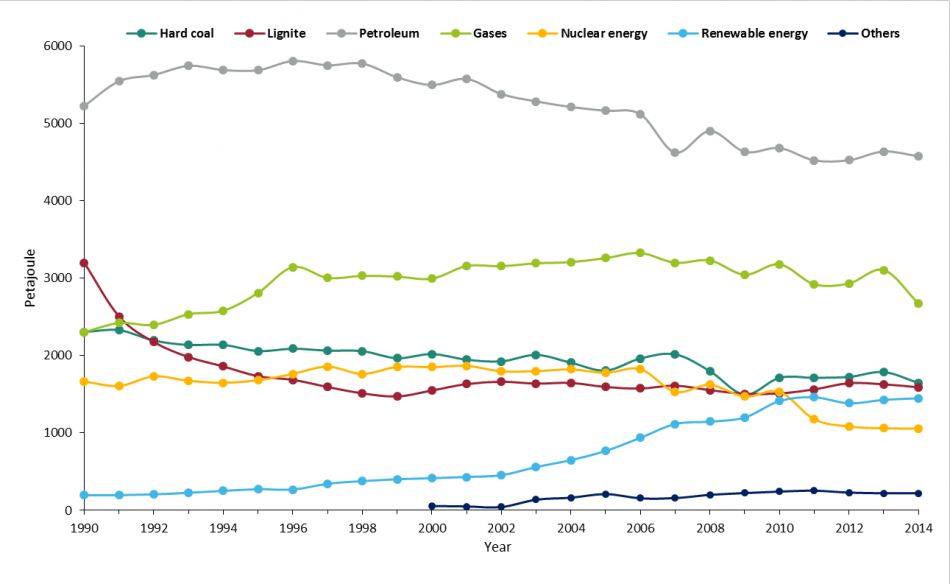 The share of renewables in primary energy consumption increased from 10.4 to 11.1 percent (Figure 4). 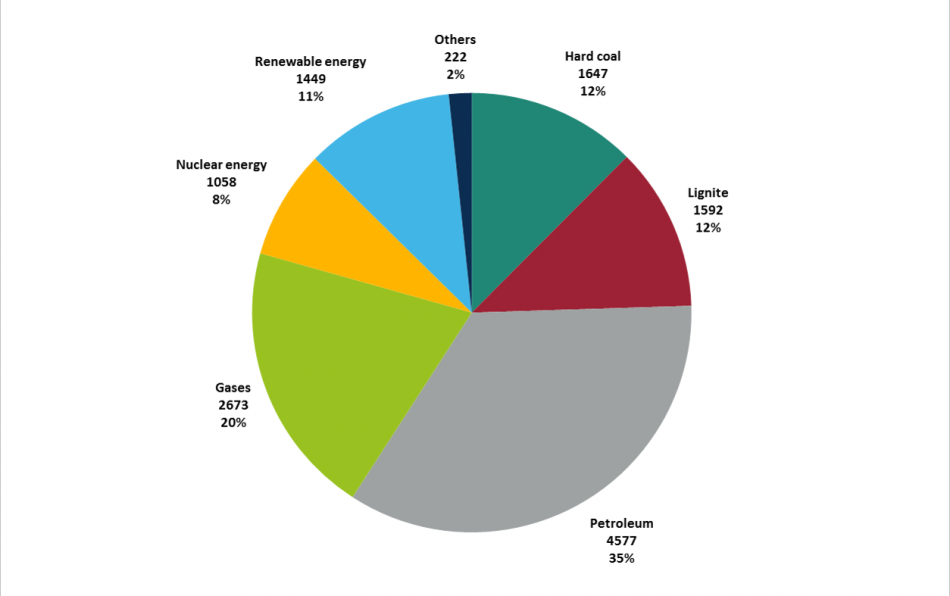 Germany’s gross electricity production (see AGEB data-set "Strommix") decreased by 3.8 percent from 633.2 billion kilowatt-hours (kWh) to 610.4 billion kWh in 2014. Generation from renewable sources was up from 152.4 to 157.4 billion kWh while power production from lignite fell by 4.9 billion kWh to 156 billion kWh – meaning that for the first time renewables overtook lignite as Germany's biggest source of power generation (See Figure 5). 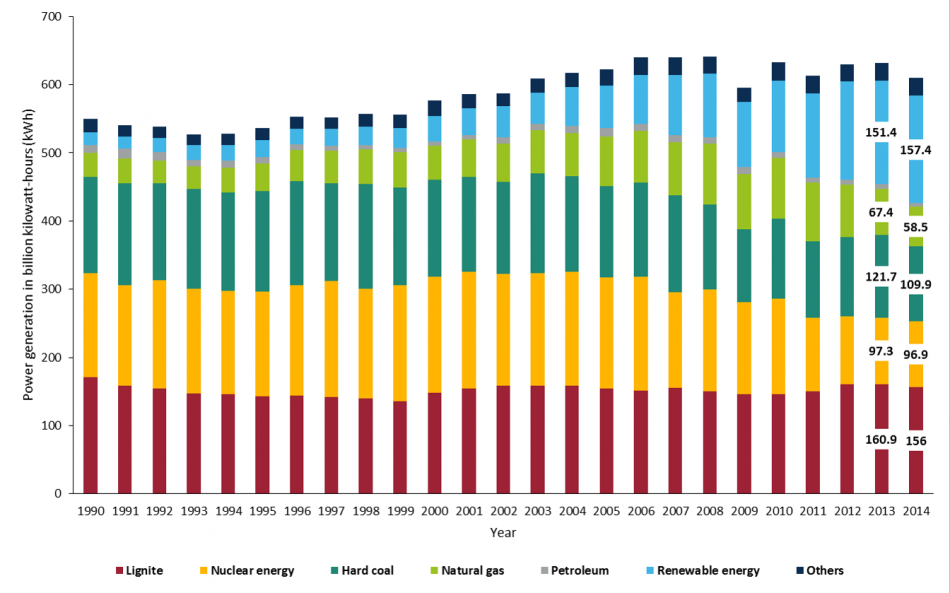 The AGEB is sponsored by German energy industry associations and economic research institutes.

While this article previously used kilowatt-hours in graphs about primary energy consumption (PEC), CLEW has now switched to using petajoule, since this unit is more appropriate to the various energy forms included in the PEC.

More data on Germany’s energy balance including an explanation of the way the AG Energiebilanzen calculates and evaluates electricity generation, can be found here.