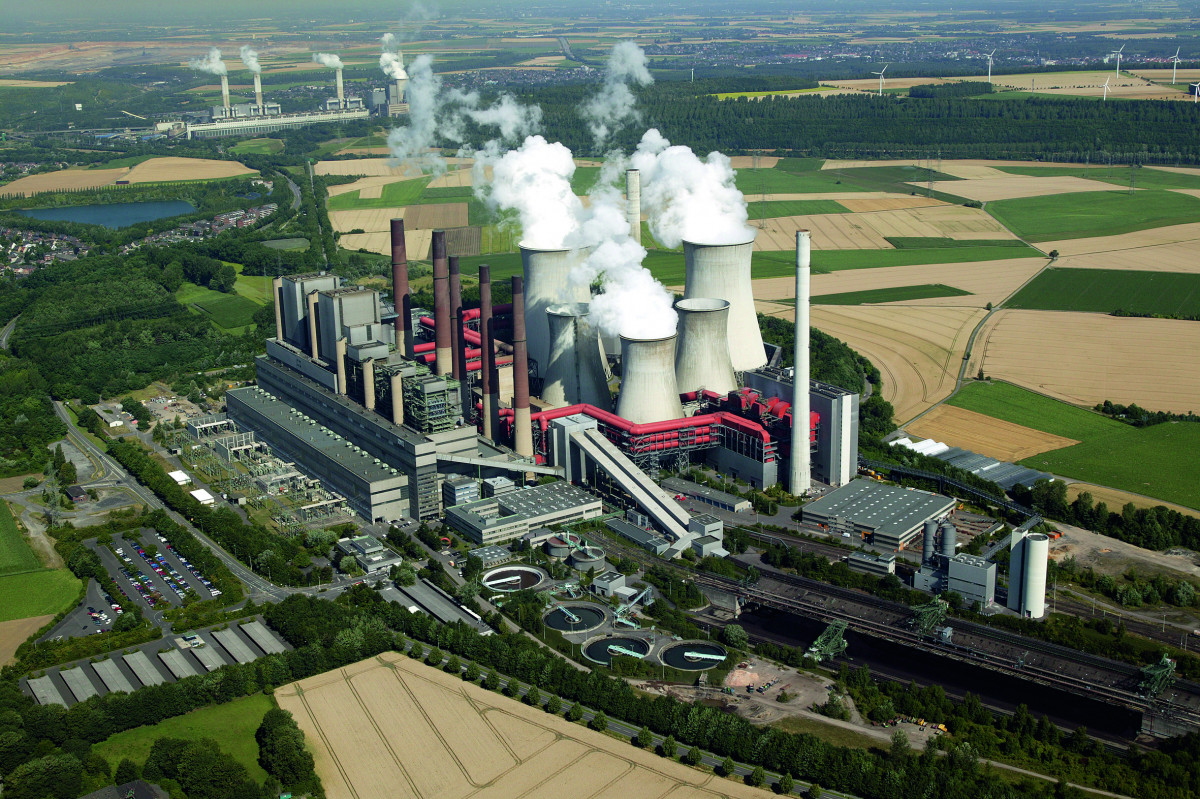 Germany’s carbon emissions have fallen sharply in 2019 for the third year in a row, bringing the country closer to climate targets it had already written off. But progress in emissions reduction is heavily tilted towards the energy and industry sectors, whereas building and particularly transport struggle to make any headway at all. Germany's environment minister Svenja Schulze said the government must be doing something right, even though many problems persist or are newly created, particularly with respect to renewables expansion. Germany's environment agency UBA said the country is on a good track for its 2030 climate targets and warned to expect any substantial lasting climate benefits from the coronavirus's economic impact. [UPDATE adds comments by WWF, VCD]

Germany's greenhouse gas emissions took another plunge in 2019, opening the possibility that the country could end up much closer to its initial 2020 climate target than expected as record renewables electricity output, another mild winter and the expected economic impact of the coronavirus were likely to dampen emissions further. The country emitted about 805 million tonnes of CO2 last year, recording a drop of 6.3 percent compared to the year before, the steepest drop since the deep recession of 2009. Emissions were now 35.7 percent lower compared to 1990 levels. The energy generation sector chalked up the greatest reduction, followed by the industry sector, both of which were heavily influenced by rising emissions prices in the European Emissions Trading System (ETS), according to Germany's Federal Environment Agency (UBA).

While the transport and buildings sectors both saw rising emissions, the success in energy and industry emissions reduction means that Germany might edge close to the target of reducing emissions by 40 percent compared to 1990, which the government already thought missed, the UBA found. The figures largely confirm earlier estimates by the energy research group AGEB from late 2019, which already stated that emissions would go down significantly, also helped by lower total energy consumption. The German government had originally planned to cut emissions by 40 percent by 2020, but all but abandoned the target in the course of the coalition talks after the 2017 elections and replaced it with an emissions budget in the new climate law.

"With the exception of the year of the global financial crisis in 2009, there has not been a greater reduction," environment minister Schulze said at a press conference in Berlin. But while the German economy in 2009 contracted by 5 percent, it grew slightly in 2019. "There never has been such a strong decrease during regular economic times," Schulze concluded.

Due to the outbreak of the novel coronavirus in Germany and Europe and the political reactions to contain it, Schulze said the government initially hesitated publishing the emissions figures today, but ultimately opted in favour of presenting them. "We still work on other topics despite the corona crisis," Schulze said, adding that "the climate crisis will not disappear just because it doesn't dominate the headlines for a few months."

The most important factor behind the lower emissions figures was the reduction of coal-fired power production, Schulze said, which itself had been caused both by substitution with natural gas due to lower prices and by rising prices in the EU's ETS, which triggered both lower coal use and greater energy efficiency efforts by industry.

"No reason to talk everything down": positive climate policy examples are needed

While Schulze said windy and mild weather conditions had helped achieve lower emissions, the success in the energy and industry sectors was also the result of political decisions, such as the expansion of renewable power sources in recent years or the gradual closure of coal plants since 2016. "I don't want to sugarcoat things, but there's also no reason to talk everything down," Schulze said, adding that positive examples for successful climate policy were needed internationally to encourage further efforts.

However, she said the transport sector, where emissions ended up being 1 million tonnes higher than in 1990, and the buildings sector, where CO2 output increased by 5 million tonnes compared to 2019, showed that much needed to be achieved still. Moreover, the current difficulties wind and solar power face in the country had to be resolved quickly in order to ensure that climate policy's "backbone" can be strengthened further, she added. Two studies commissioned by Schulze's environment ministry (BMU) as well as the economy ministry (BMWi) recently found that measures outlined in the government's 2030 climate package and the country's coal phase-out will not suffice to achieve the envisaged reduction of 55 percent and instead gauge the effect at up to 52 percent.

Climate policy advisor Henrik Maatsch of environmental NGO WWF Germany said the reduction success must not hide the "structural sluggishness" of the government's climate efforts. Maatsch said the government struggled to find a workable strategy for implementing long-known solutions to overcoming the slump in wind power expansion or guaranteeing continued solar power support. "In times like these it becomes ever clearer that global crises like global heating require determined and early action." 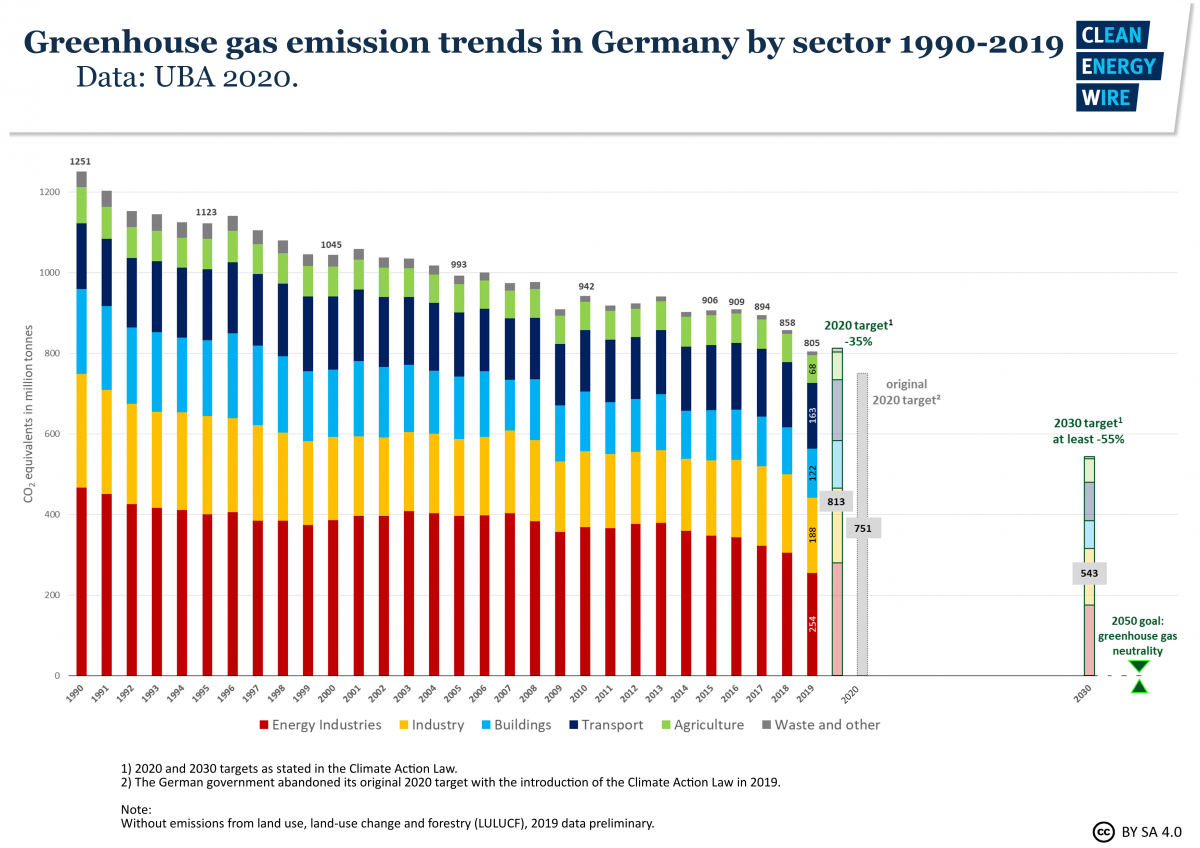 "Corona effect could even obscure the need for change"

With respect to the government's initial target of reaching a 40 percent, or 500 million tonnes of CO2 equivalents* reduction by 2020, Schulze said Germany could come much closer to it than initially expected provided that current trends persist.  Michael Strogies, head of emissions reporting at the UBA, said based on last year's developments and also on the current slowdown in industrial production and transport due to efforts to contain the outbreak of the novel coronavirus in Germany and elsewhere, reaching or even exceeding the 40 percent target would be possible "in principle." Strogies said Germany would certainly come much closer to the target than predicted. "But I wouldn't say we exceed 40 percent just yet."

Dirk Messner, head of the environment agency, said that while the coronavirus would certainly have a one-off effect on emissions reduction, this would not bring about structural changes, which is the true aim of climate policy. "The corona effect could even obscure the need for change," Messner said. However, he argued the virus's spread and the subsequent cooling of economic activity across the world also illustrated the disruptive dangers that lurk in climate change. "It might make people more sensitive to what a collapse of the Earth system means and make clear that such a collapse is very well possible," Messner said.

In China, where the virus was first registered, industrial production and transport volumes have decreased sharply since the beginning of the year, followed by a sharp drop in greenhouse gas emissions. In Germany and indeed most of Europe, similar effects are expected to set in soon, after most governments enacted emergency measures last week that range from school closures and travel curbs to curfews for non-urgent activities.

Businesses ranging from globally operating airlines to small local restaurants are already heavily affected by the policies as well as by changing customer behaviour. The German government as well as the EU have promised generous state support to cushion the coronavirus's impact on prosperity. Economy minister Peter Altmaier promised that "no healthy company should have to go bankrupt because of the coronavirus," signalling the government would provide financial coverage to workers and employers.

German Economy Minister @peteraltmaier: "No healthy company should have to go bankrupt because of the coronavirus. That's why we are putting in place comprehensive protection for employees and businesses." @BMWi_Bund https://t.co/SkellbrREx

UBA head Messner said it will be important to ensure that all support measures for the economy are designed with climate targets in mind. "We should opt for green stimulus packages," he said, explaining that this could, for example, include energy-efficient building renovation, the roll-out of electric vehicles and more public transport options, as well as a greater focus on hydrogen-based fuels for industry applications.

"Germany is headed in the right direction regarding the 2030 climate targets and that's very welcome," Messner said. "However, we also know that we are currently resting on our laurels, especially with respect to renewable energy sources." He said the priority now was to make sure that renewables expansion gets back on track and that the electrification of the transport sector is quickly scaled up, calling for a quota of 30 percent e-cars in new registrations by 2025 as well as the substantial reduction of the total number of cars from 450 per 1,000 inhabitants in Germany to 150 as a longer-term goal.

Transport NGO VCD criticised the lacklustre emissions reduction performance in the transport sector, pointing out that engine efficiency gains are routinely outweighed by sales of heavier and more vehicles and  more kilometres travelled by car, and that the share of transport in total emissions is growing constantly. "We need a consistent turnaround in transport," said VCD's Michael Müller-Gönnert. Instead of giving precedence to cars, transport planning had to push more sustainable alternatives, especially in inner cities.