“Own battery production would be a ‘joke’”

German automaker VW will not start its own e-car battery cell production because the company believes it would be too expensive. “That would be a joke,” said VW CEO Matthias Müller after months of speculation on the issue, according to German news agency dpa. He said the company was studying batteries’ entire production chain and would probably announce by the end of this year how to deal with the issue.

“The music plays in Asia”

The VW decision against its own battery cell production shows that Germany is no longer an option as a location for the industry, writes car industry researcher Ferdinand Dudenhöffer in a commentary for bizz energy. Daimler stopped its own cell production, BMW never tried it, and prominent German suppliers Bosch and Continental buy the cells elsewhere to produce customised batteries. Germany lost its innovative lead in battery technology in the past years because politics and industry didn’t prioritise the issue. “Now it’s too late. The chance is lost,” writes Dudenhöffer, pointing to large Asian industry players. “Cell production is simply too expensive for VW and too far away from the market’s big players […] That ship has sailed, which is sad.”

The Group of Twenty (G20) is “beginning to head in the right direction” towards a low-carbon economy but needs to step up its efforts to meet the Paris Agreement’s temperature goals, according to a report by Climate Transparency, the international consortium of environmental organisations. Coal emerged as a main issue because “a large number of planned new coal-fired power plants […] would almost double the G20’s coal capacity”, leading to more emissions, the organisation says in a press release. In terms of investment attractiveness, Germany leads the list, but its position could be endangered by the recent renewables law reform that puts a cap on renewables growth, says the report. 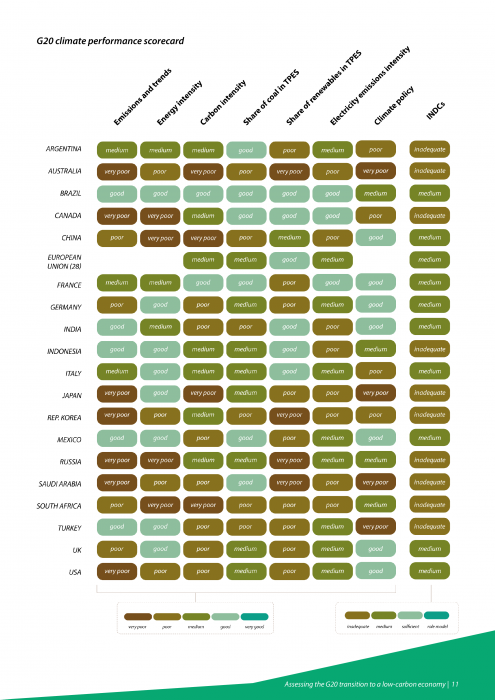 Also read a CLEW factsheet on the planned Climate Action Plan 2050: Negotiating a path to decarbonisation.

The agreement that economy minister Sigmar Gabriel reached with the EU Commission on state-aid related aspects of the country’s new power market law and other energy policies “makes regulations permanent that will keep Germany from reaching its 2020 climate targets”, writes Joachim Wille in an opinion piece for klimaretter.info. Among other things, the agreement restrained the support for combined heat and power (CHP) plants, whose share in German power generation was far below that of other countries; “Embarrassing for the Energiewende location ‘D’,” writes Wille.

Find more information in the CLEW article on the agreement with the EU Commission.

“Assign the dirt a price tag!”

Representatives of industry, civil society and science call for an internationally coordinated price system for CO₂ emissions in a guest commentary in Die Zeit. The Federation of German Industries (BDI), environmental NGO Germanwatch and the Mercator Research Institute on Global Commons and Climate Change (MCC) see the upcoming G20 summit in China as the ideal platform to decide a schedule to gradually introduce CO₂ prices and reduce subsidies for fossil fuels.

“Bosch uses water to save petrol”

German car supplier Bosch has developed a technology to save cars’ petrol consumption by injecting water into combustion engines, reports Frankfurter Allgemeine Zeitung. The “water boost” technology reduces fuel consumption by at least four percent, and Bosch says it shows there is still room for improvement in combustion technology. In a commentary in the same newspaper, Susanne Preuß writes the new technology could be a boon for car companies, car drivers and the climate.

Despite their massive size, offshore wind farms only contribute 1.3 percent to Germany’s power supply because they are expensive and grid connections are problematic, writes Jürgen Döschner in a commentary for public regional broadcaster Radio Bremen. “But the most important weakness of offshore wind turbines is the strength of the renewable competition: Ever higher and more efficient onshore turbines, the ongoing fall of PV costs and quick progress in storage. That’s why even generous feed-in tariffs don’t help.”

“Is the renewable surcharge of any use as a ‘price tag’ for the Energiewende?”

“Dependence management - The background of the German gas policy”

A report by Polish think tank Ośrodek Studiów Wschodnich (Centre for Eastern Studies) examines the challenges Germany faces regarding the country’s dependence on natural gas. “Natural gas plays a key role in the German economy, […] is the most important energy source for the German industry, [and the Energiewende] will strengthen the significance of natural gas in the energy sector, even though the gas consumption volume will decrease,” write the authors.

For background, read the CLEW dossier The Energiewende and its implications for international security.