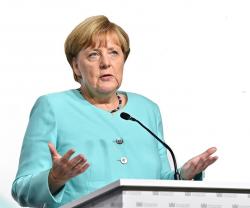 “From my point of view, this [Germany’s exact climate ambitions, editor's note] must be decided at the start of the next legislative period,” Merkel said at a conference by local utility association VKU. Germany’s official target is a CO2 cut of 80 to 95 percent by 2050. “But obviously, there is a huge difference between the two […] clarification is needed.” Merkel said that Germany will exit coal step-by-step, but must not move too hastily. “This would push whole regions into an unacceptable situation,” Merkel said with reference to coal mining regions Lusatia and North Rhine-Westphalia. (14 March 2017) 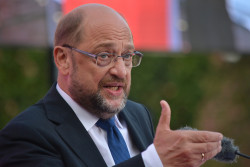 Martin Schulz (candidate of the Social Democrats): The SPD states in its party programme for the 2017 election that climate protection “means safeguarding peace and international solidarity”. They want to introduce a national Climate Protection Law and step up the efforts of the Climate Action Plan. They also want to see the 2020 climate targets achieved. Martin Schulz himself has largely kept shtum on energy and climate policy throughout his campaign. Environmental organisations criticised this in an open letter in July 2017.

On the future of automobiles in Germany and the idea of banning internal combustion engine cars:

Merkel: “I cannot name a specific date now, but the approach is right, because if we invest more in charging infrastructure and technology for e-cars fast, a general transition will structurally be possible” (17 August 2017, SUPERillu)

In a televised interview with public broadcaster Phoenix, Merkel said that the German car industry had to “see the writings on the wall” regarding the future of mobility. “Otherwise, foreign companies will come one day and show how it’s done, how e-cars are made. I would like to avoid that”, she said. (14 August 2017)

Schulz: “The diesel engine will still be needed for some time to come.” Schulz also said diesel bans in inner cities made no sense. (17 July 2017)

“We won’t be able to get rid of automobiles within the next 10, 15 or 20 years and this is why we need improved combustion engines during the transition of the transport system.” (18 September 2017).

“With a binding European e-mobility quota we will significantly increase the share of e-vehicles,” writes Schulz in a 5-point plan on the future of Germany’s automobile industry. The auto industry suffered a crisis of trust and faced the “biggest structural change in its history”. (11 August 2017)

Merkel: “It would be best if damaging emissions had a price world-wide. A global carbon market would be an incentive for the most efficient production possible, while ruling out a distortion of competition,” Merkel said in her speech at the 8th Petersberg Climate Dialogue. (23 May 2017)

Merkel’s CDU has not specified policies on the European Emissions Trading System (ETS).

Schulz: The Social Democrats (SPD) have vowed in their party programme that they would initiate reform of the ETS “to allow it to fulfil its central climate protection role” and start talks on a European floor price for CO2 if this fails.

On the US leaving the Paris Climate Agreement:

Merkel: The decision “is extremely regrettable, to say the least. The Paris Agreement continues to be one of the cornerstones of cooperation between the world's countries, and this accord is indispensable in the realisation of the goals of the Agenda 2030. So after last night’s announcement by the US administration we have to look forward. This decision can and will not stop all of us who feel responsible to protect the earth. (2 June 2017)

“I want to say very clearly: Almost my entire political career has been connected to these kinds of accords. […] Finally, in 2015, we succeeded in uniting the world. That’s why I will continue to fight for the implementation of the Paris Agreement.” (14 June 2017, CDU party conference)

Schulz: "You can withdraw from a climate agreement but not from climate change, Mr. Trump. Reality isn't just another statesman you shove away." [Twitter]
“If we want to live up to our responsibilities towards our children and their children, then there is no reasonable alternative to a sustainable climate policy. That’s why I think it’s disastrous, if climate policy is sacrificed on the altar of short-term political and economic interests – which seems to be the combination for US President Trump.” [link to video] (2 June 2017)