The new German government and the energy transition

Government
Re-elected chancellor Angela Merkel's grand coalition government of Conservatives and Social Democrats has been sworn in and can now get to work, nearly six months after the election. The parties say they want to continue the Energiewende in a "clean, secure and affordable manner," and make sure Germany remains a pioneer in climate protection. Experts and commentators criticise the lack of concrete proposals in the coalition treaty on topics ranging from the country’s coal exit, reaching climate targets and the goal of a 65 percent renewables share in the power mix to strengthening the German power grid. [Update adds summarising analysis of new government]
More facts & background

To keep track of the most recent developments, search for the hastag #government, and also check our daily News Digest and follow us on twitter @cleanenergywire. 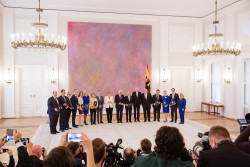 New government gets little credit in quest to regain climate lead - A new government with fresh faces for environment, energy, and transport policy is supposed to bring Germany's dented reputation as a climate policy pioneer back on track. Critics point out that apart from ambitious announcements, there is not much to back up Germany's claim for becoming a climate policy leader again as of yet. However, energy transition observers say the new government could in fact still achieve a significant reduction of greenhouse gas emissions and make progress with the Energiewende if the goals are backed up with effective policies and past mistakes are avoided.

Germany's governing coalition partners have concluded a treaty that is likely to result in a final deadline for coal-fired power production in Germany by the end of 2018. The agreement was reached after weeks of intensive talks. The new government watered down the 2020 greenhouse gas emissions reduction goal, but said it will introduce a climate protection law to ensure that 2030 climate targets are achieved. By 2030, the share of renewables in Germany's power mix is to reach 65 percent, provided that the grid’s carrying capacity is sufficient.

The Clean Energy Wire presents excerpts on climate, energy and transport from the agreement in this factsheet.

Reactions to Germany's coalition agreement - The Clean Energy Wire presents first reactions to texts on transport, climate and energy by politicians, industry, NGOs and the media.

German Chancellor Angela Merkel has chosen her close ally and current head of the Chancellery Peter Altmaier as the next economy and energy minister. This puts the political heavy-hitter in charge of shaping Germany’s Energiewende at a time of crucial decisions and potential conflicts. In the past, Altmaier irked the renewables industry and environmentalists during his short tenure as environment minister. But he also earned respect from all business sectors and across party lines for his deep knowledge of the topic and ability to broker compromises.

Germany's new environment minister Svenja Schulze is a new face in Chancellor Angela Merkel's fourth cabinet. But the Social Democrat inherits a range of well-known challenges - from coal emissions to air pollution by diesel cars. The country's top climate policy official will face the difficult task of pushing her agenda on climate and energy against a group of more powerful Conservative ministers, while an internal re-organisation means her own ministry will have fewer competencies than under the last government. Schulze has shown that she is capable of achieving her goals, but climate activists say she has to prove where her loyalties lie.

The CSU chose current general secretary of the Christian Social Union (CSU) Andreas Scheuer to become Germany's next transport minister. Against the backdrop of a looming ban on polluting diesel cars in Germany’s city centres, proponents of this transition now fear that the country’s new transport minister will slam the brakes instead. Official government targets for emissions reduction in the transport sector may well force car-loving Conservative Andreas Scheuer’s hand, regardless of his personal convictions.

2030 renewables goal "not difficult" - The coalition agreement by Germany's would-be coalition parties CDU/CSU and SPD is a step towards "realistic" Energiewende policy, says CDU energy policy spokesperson Joachim Pfeiffer. He argues a coal exit date for Germany - envisaged in the coalition treaty - is not necessary as the country is on track to meet its pledges made under the Paris Agreement either way. This will partly be due to an ambitious expansion of renewable energy sources, which according to Pfeiffer will be achieved "without any difficulties."

The provisions on climate, energy, and transport in the coalition treaty agreed by Angela Merkel’s conservative CDU/CSU alliance and the Social Democrats (SPD) recognise the big challenges of Germany’s energy transition project, but lack concrete instruments and measures, says Andreas Löschel, economist and head of the government-appointed independent expert commission on Energiewende monitoring. The planned commissions, mandated for example to plan the phase-out of coal-fired power generation, could deliver the “innovative proposals” needed. The Clean Energy Wire asked the energy transition expert about CO₂ pricing, a reform of the energy taxes and levies system, grid pricing, and the integration of renewable energy sources.

Social Democratic (SPD) energy spokesman Bernd Westphal told CLEW in an interview. He concedes that the challenges awaiting the country in terms of further integrating renewable energy sources and reducing emissions are going to be significant. While the SPD's and Conservatives' decision to water down Germany's 2020 climate goal was "no drama," there will be "no more excuses" in 2030.

In their coalition treaty, negotiators from Angela Merkel’s conservative CDU/CSU alliance and the Social Democrats (SPD) have agreed to set up a special commission charged with managing the phase-out of coal-fired power generation in Germany, which includes setting an end date by next year. This means taking the easy way out, because such a commission does not substitute for political action, says Lisa Badum, climate spokesperson for the Green Party’s parliamentary group. It would need more time, and thus it is the wrong instrument, because urgent action is needed on climate protection, Badum told the Clean Energy Wire.

How did we get here?

Coalition watch - This article - which was regularly updated until the cabinet was sworn in - traces the progress of coalition building.