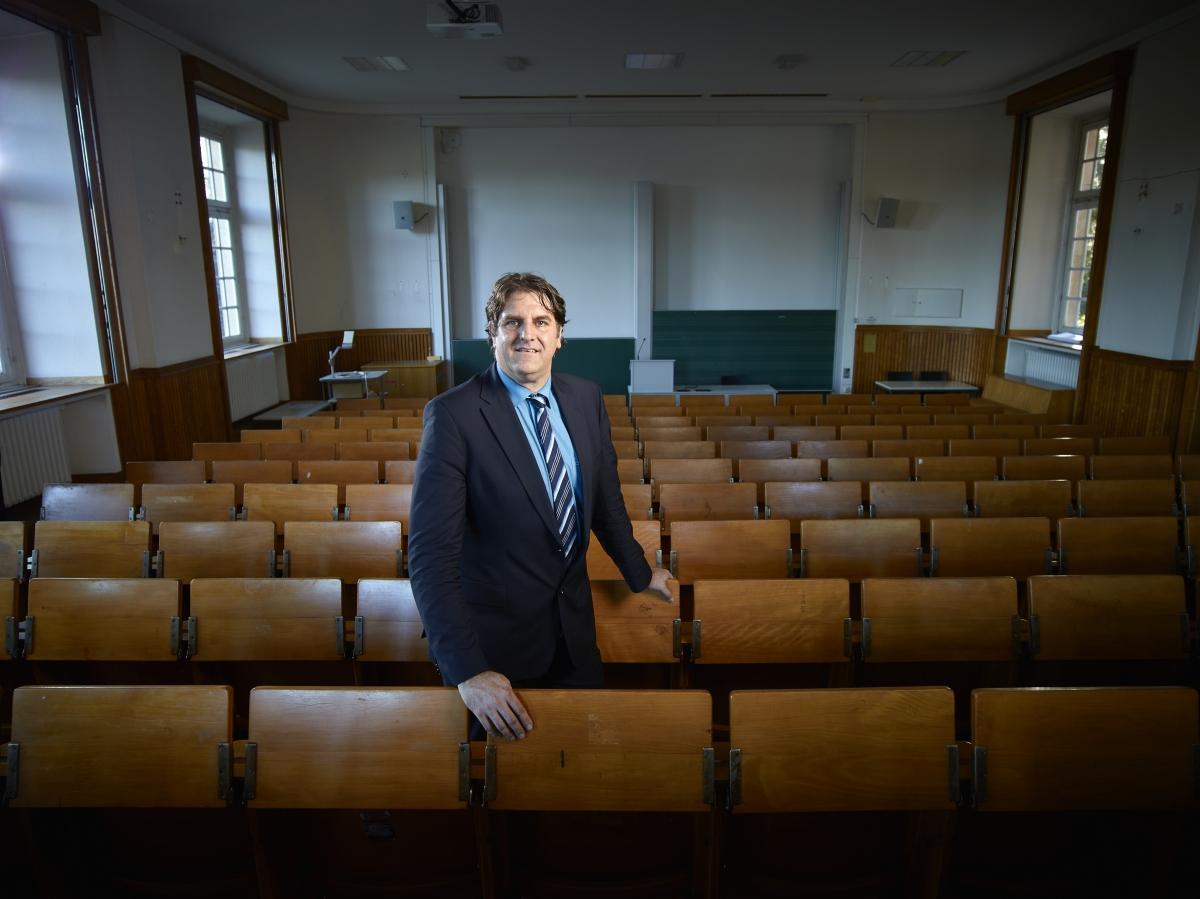 Clean Energy Wire: As one of the authors of the annual Energiewende monitoring reports, you are an expert on Germany’s energy transition, and you regularly make proposals on advancing it. Does the coalition treaty qualify as the ‘great breakthrough’ that is needed for the coming four years?

Andreas Löschel: It is not ‘the great breakthrough’ yet, but it could become just that. In the treaty text itself we have a pretty clear commitment to the Energiewende framework – regarding climate protection and the different sectoral goals; regarding energy efficiency, which plays a big role; and regarding renewables expansion. However, in most areas the proposals are not very concrete – except for the section on renewables. This now must be developed throughout the legislative period. So the framework itself makes sense, the climate protection law included, but what’s missing is a detailed description of the requisite instruments, which we saw, for instance, in the last coalition treaty four years ago.

You mentioned renewables expansion as a positive point. The parties want to set up additional auctions for 4 gigawatts (GW) of wind capacity, 4 GW of solar power, and some offshore power in 2019-2020. Is this a realistic proposal? Can the capacity be built this fast, and will the power grid be able to cope?

The text mentions several times the need for the adequate synchronisation of power grid capacity and renewables expansion. That’s especially true for such an accelerated expansion of renewables. I think that the proposal can become a reality, and I think that the required physical conditions are there. However, the question is, of course, how to reach the 65 percent [renewables share] in the long term [by 2030]. How can we better align renewables and grid capacity, and what’s the significance of regional coordination? I think this is a very important aspect.
I think that it would be problematic if such a regional coordination was decided by politicians and not by the market. The treaty touches on this issue, but there is no word on how to deal with it. One proposal we made in the context of Energiewende monitoring is the development of grid congestion pricing, which could play a major role in steering investment in the right direction and providing incentives to production.

Jochen Homann, president of the Federal Network Agency (BNetzA), recently said that the European Union would split Germany into different power price zones should it not reach its grid expansion targets. Do you see this danger as well?

Yes, this is a real issue. The German-Austrian price zone split is already being discussed, but of course that’s not the core of the problem. The question concerns the regions within Germany. A split is one possible answer to the question of diverging grid and renewables expansion. Another possibility is differentiated grid pricing - differentiated grid prices for producers and consumers when bottlenecks occur. If we do not want a power price zone split, there’s no way around having grid problems reflected in the markets.

In a commentary you wrote in November 2017 on the status of the energy transition project, you called for a focus on long-term climate targets, and not so much on the 2020 emissions reduction goal. Would you say that this proposal has made its way into the coalition treaty?

The long-term targets are strengthened. This is far-reaching, because the Climate Action Plan 2050 prescribes targets for all sectors, some of which will be very hard to reach, for example in the transport sector. For now, we do not see the measures planned to help us reach these targets. We know that renewables expansion alone will not allow us to reach our climate goals.
We will need additional carbon pricing for the other conventional energy sources, otherwise we will not reach our CO₂ targets. In the coalition treaty, the wording on this is very weak, there’s only a reference to the Élysée Treaty. Obviously, such a building block is missing that would help us reach our ambitious, long-term 2030 goals. It is not in the text today, but it could derive from the work of the different commissions.

Why is a proposal for a set CO₂ price not part of the agreement?

Of course, it’s a problem to impose additional costs, and one would have to take the whole system into account. A CO₂ price cannot just be implemented in itself. It must be embedded in a larger restructuring of the energy taxes and levies system. This means that other instruments might have to be abolished, for example the electricity tax. We also talked about grid fees, and financing renewables – that’s a complex network of instruments.
The problem cannot be solved with a CO₂ price - we have to adjust several aspects. Maybe the willingness to shape policy in this area was not enough at this time. Maybe it will happen once policymakers realise that it’s necessary. Sector coupling and reaching climate targets will not happen without a price on CO₂ and a reform of the power taxes and levies system.

Last year, you said that you see the “greatest need for action” in the transport sector. Does the coalition treaty pick up on this?

Interestingly enough, the transport sector takes up a large part of the agreement. When you compare it, for example, to climate policy, a lot more is said on transport. The text places a special focus on transport infrastructure, and mentions many aspects that could prove useful, such as infrastructure for alternative drives; strengthening public and rail transport; the question of how to tackle research; or battery cell production. The treaty touches on the important issues, and now we will see whether the idea of mandating newly established commissions with finding solutions is going to work. Such commissions will work on sustainable plans and goals in the context of climate change, and also in mobility.
Unfortunately, one proposal we [the independent expert commission on Energiewende monitoring] made did not make it into the text: road pricing. This could be an exciting topic in the future, when we discuss the market-based steering of traffic flows and traffic reduction. Road pricing could make an important contribution not only in terms of the climate, but also in improving air quality and alleviating traffic congestion.

The planned commissions are already subjected to a lot of criticism. Some say that such a process needs more time, and that the parties have shifted political responsibility to these special commissions.

It surely is a different approach, especially if you compare it to the previous legislative period. Back then, the “10-point energy agenda,” which was also laid out in the coalition treaty, provided a very clear roadmap for Energiewende projects. That plan was implemented very steadfastly. Now we have a different structure. In many areas, the major challenges are identified, but the steps to be taken are not very clear yet. Like I said, certain areas still lack the ‘great breakthrough’, for example CO₂ pricing, the energy taxes and levies system, and road pricing. Maybe such commissions can prove to be innovative instruments by bringing issues to the table that otherwise could not get through in difficult negotiations.
So, I am not wholly critical just yet, because such commissions could produce innovative proposals, especially because the general framework has already been set. With the envisaged climate protection law and the commitment to the Climate Action Plan 2050 there is a need to act, and this will find expression in the work of the commissions. They are supposed to deliver.

What are the concrete challenges for the German energy transition that need to be kept in mind over the coming years?

Currently, we are working on calculations that show that without additional CO₂ pricing, the increased renewables targets for 2030 will result in a ten-euro decrease in the wholesale power price, which is quite substantial in my view. This, in turn, will lead to problems regarding the market-based financing of renewables, and will push up the costs, because market incentives will wind down – if there’s no CO₂ pricing that pulls up wholesale prices. Also, the CO₂ targets will not be reached without an additional coal exit policy. So, we will need a second pillar, namely a higher CO₂ price, both for the dynamics on the wholesale market, and for the effect on CO₂ emissions.

Do you think that the coalition partners have understood which energy transition challenges need to be solved, and have they proposed – at least in part – the right solutions?

The challenges are understood. I don’t see an important area that has not been touched. The different issues that we identified as the major challenges – CO₂ pricing, reform of the energy taxes and levies, grid pricing, better integration of renewables – are all in the text. But these are all issues where more concrete solutions are needed. We haven’t talked about the construction sector, the tax incentives for the energy efficient retrofitting of buildings, or the role of renewables in the context of the planned Building Energy Law (GEG); all this is mentioned in the treaty. We have had a long discussion about the successor to the efficiency plan NAPE [National Action Plan on Energy Efficiency], which had not brought the expected results.
For efficiency, pricing is a very important topic, and not only in the construction sector. The text mentions “efficiency first,” and says that respective funding will be stable – so there’s no big signal on the need for state support to increase efficiency. This means it’s all the more important to establish market-based incentives. For this end, we need a reform of energy taxation, because it will not work with the current level of support. We will see if the future government will dare to tackle this. Experience shows that different political restrictions, such as elections, may make this difficult. These obstacles might be removed by the end of the year, and then the government can buckle down to work.
To conclude, it’s all in there, but not clearly worked out yet. Maybe the expectations are also too high, because so many issues are connected here. We will have to watch closely whether – with the help of the commissions’ output – the big issues will be tackled by the middle of the legislative period. One can only wish that the political actors are going to have the will it takes to achieve that ‘great breakthrough’.