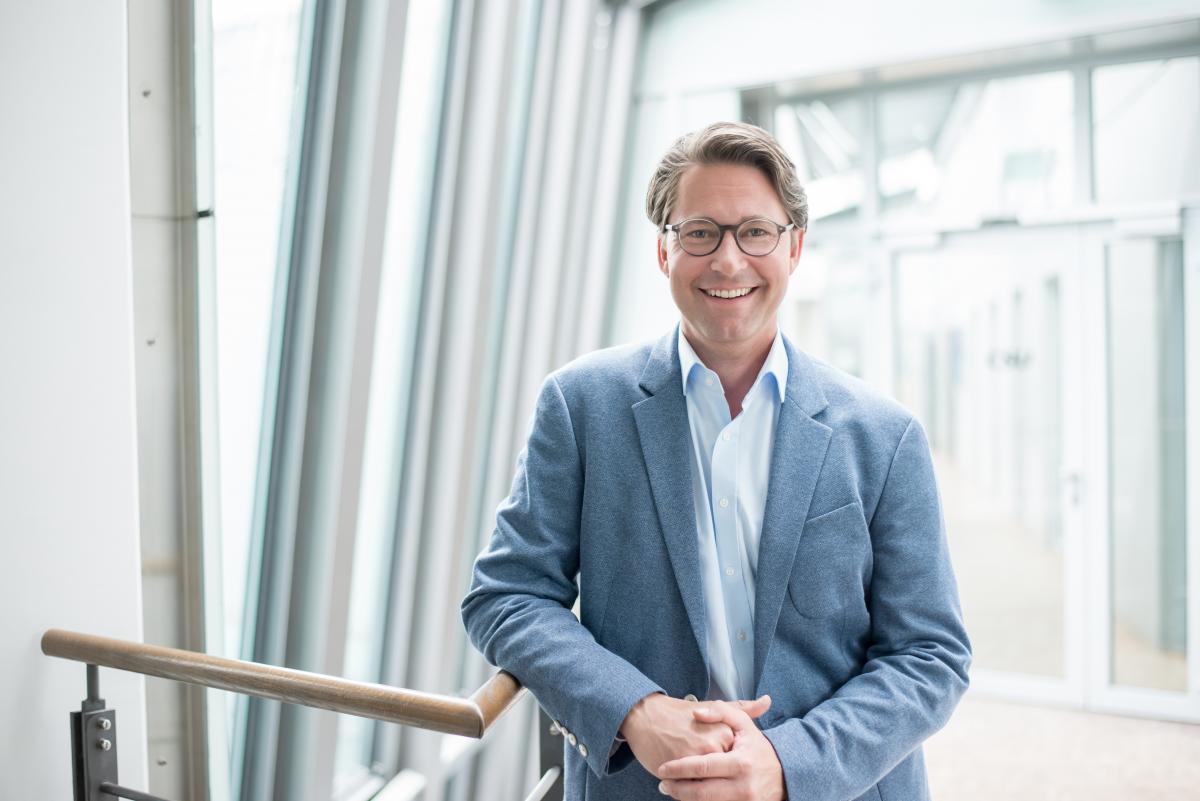 CSU politician Andreas Scheuer enters office at a diffcult time for Germany's transport sector. Picture: CSU
Car industry hub Germany is under increasing pressure to accelerate the shift to sustainable mobility in order to reach its climate targets and improve the quality of air in inner city areas. Against the backdrop of a looming ban on polluting diesel cars in Germany’s city centres, proponents of this transition now fear that the country’s new transport minister will slam the brakes instead. Official government targets for emissions reduction in the transport sector may well force car-loving Conservative Andreas Scheuer’s hand, regardless of his personal convictions.

Proponents of sustainable transport fear that the process of decarbonising Germany’s transport sector  will continue to stagnate under the 43-year-old Andreas Scheuer, who is a staunch defender of private car ownership and the powerful car industry. Scheuer is a member of the conservative Christian Social Union (CSU), the Bavarian sister party of Angela Merkel’s Christian Democratic Union (CDU).

“I do not expect any stimulus for change from Scheuer whatsoever,” Andreas Knie, CEO at the Berlin-based think tank Innovation Centre for Mobility and Societal Change (InnoZ), told the Clean Energy Wire.

“Instead, he will try to preserve the status quo involving privileges for private car owners. Scheuer will do anything to make sure that as many people as possible have combustion engine cars that they can drive anywhere.”

Following a recent landmark court ruling opening the door to diesel driving bans in inner cities, car-proud Germany, home to industry giants BMW, Daimler, and Volkswagen, is currently caught up in a fervent debate on the future of transportation in general, and the fate of the diesel in particular.

Scheuer, who is already familiar with many relevant issues having served as transport state secretary from 2009 to 2013, will have to navigate the ministry through turbulent waters. He is under considerable pressure from the EU, which has threatened to sue Germany because pollution levels in many cities exceed EU limits. Insufficient action by Scheuer’s ministry to improve air quality is likely to result in hefty EU fines.

Germany is struggling to manage the shift to a more sustainable transport system and the technological overhaul of its most important export product. In the world’s fourth largest economy, transport is the only sector that has made no recent climate progress whatsoever. Economic growth, coupled with the rising number of cars and heavy vehicles, have pushed up CO2 emissions instead, putting Germany’s climate targets further out of reach. 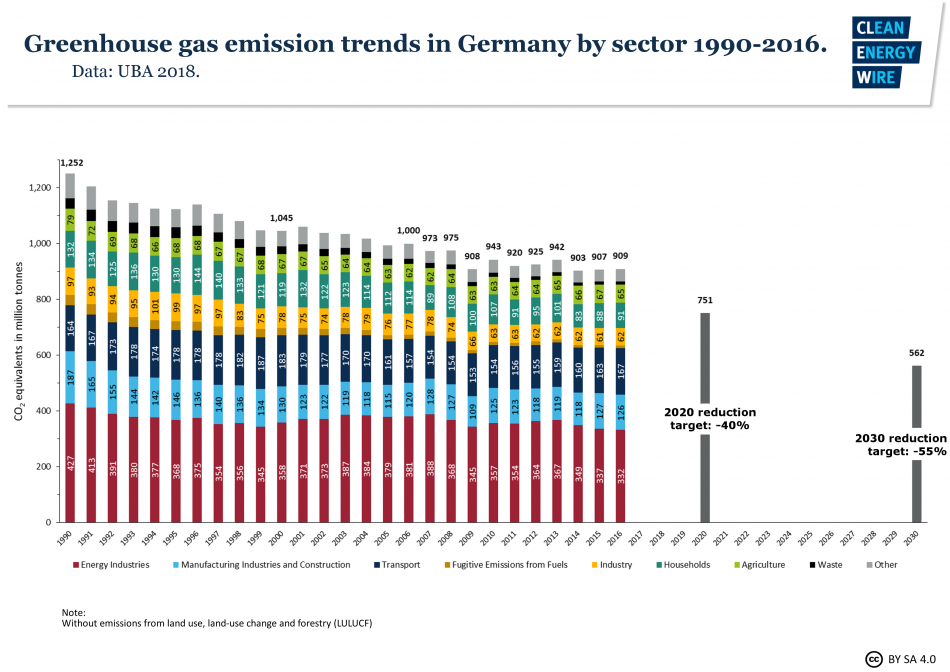 Jens Hilgenberg, transport expert at the environmental NGO Friends of the Earth Germany (BUND), shares Knie’s sceptical assessment of Scheuer. “Sadly, I don’t believe there will be much progress under Scheuer. I simply lack the imagination.”

But the government target to reduce CO2 transport emissions almost by half in little over ten years will likely force the future transport minister to act.

In its 2016 Climate Action Plan, the outgoing government committed to cut the transport sector’s CO2 emissions by at least 40 percent by 2030 compared to 1990 levels. In its recent coalition agreement, the new government proposes a host of measures to reach this target, which is considered very ambitious even by clean transport proponents.

“The climate targets create real pressure, and the minister will have to deliver on those targets. Wishy-washy ministry declarations of intent will no longer be enough,” a transport ministry source told the Clean Energy Wire.

Scheuer’s personality and professional record also elicit mixed reactions. Whereas the ministry source described Scheuer as a “matey character” enjoyable to work with, another person, who has dealt with Scheuer on transport issues in the past, called him an “extremely tough” negotiator, who can even be “a brute.”

“He is a distinctly power-hungry politician and a clever strategist, who knows exactly which strings to pull. In politics, these can be real management qualities,” the source said.

Scheuer will follow in the footsteps of his party colleague, Alexander Dobrindt, who was under constant fire from environmental organisations for his inaction during the diesel scandal, and also for his one-sided defence of the car industry.

Days before entering office, Scheuer had indicated his policy direction with his outright rejection of federal legislation to introduce a ‘blue badge’ to identify comparatively clean cars. Many environmentalists say such a badge would be the only option to prevent a confusing array of local driving bans in polluted cities following the 27 February court ruling.

Scheuer doesn’t conceal the fact he is a fan of cars old and new: he initiated the establishment of the German parliament’s cross-party ‘Automobiles Kulturgut’ (vintage cars as cultural assets) group to campaign on behalf of the owners of vintage vehicles.

During the election campaign, Scheuer locked horns over transport policy with the Greens, who called for an end to the sale of new internal combustion engine cars by 2030. Scheuer tweeted that “the Greens’ ideological crusade against the car industry is hypocritical and dishonest,” adding that “the Greens are a danger to Germany as a carmaking location and to hundreds of thousands of jobs.”

Unsurprisingly, the Greens view his appointment with great scepticism. “Mr Scheuer’s first statements [on the ‘blue badge’] suggest that the grand coalition will continue the catastrophic transport policy of the past years,” the party’s transport expert, Anton Hofreiter, told the Clean Energy Wire.

“In all likelihood, things will continue as before, with the transport ministry acting as the car industry’s henchman. The real problems of transport policy will not be addressed,” Hofreiter said.

At a conference held in early March, Kurt-Christian Scheel, director of the car industry association (VDA), said he was looking forward to fruitful cooperation with Scheuer.

Critics like Hofreiter believe that German carmakers will identify with the goal of preserving the status quo by keeping the combustion engine in general and the diesel in particular alive for as long as possible. The carmakers at issue are latecomers to the transition to low-carbon vehicles, and face an uphill struggle to catch up with the likes of Tesla or Nissan.

But the transport ministry insider said Scheuer’s best option might be to push the shift to electric mobility, because this could be a win-win situation for the carmakers, the car-loving public, and climate action.

Also, a car-loving, conservative politician may turn out to be better placed to sell necessary but unpopular transport policies to the German public than a member of the Green party would ever be.

Germany’s climate goals, and specifically the recently signed coalition agreement between the conservatives and the Social Democrats, have set ambitious targets for the transport sector, including specific measures to cut emissions, improve air quality, and get more people to use public transport.

“The new minister will be busy, because the target of cutting transport emissions by at least 40 percent by 2030 was not questioned in the coalition treaty,” commented BUND’s Hilgenberg. “This clearly implies that Transport Minister Scheuer must not waste time before setting in motion a host of different measures.”

But InnoZ’s Knie remains sceptical that the plans contained in the coalition treaty will become reality. “It’s true that some of the proposed measures are quite ambitious. But I will only believe they will become reality when I see them. The previous coalition agreement also contained many ideas that never saw the light of day.”

Many environmentalists justify their highly sceptical view of the new minister by pointing to his party affiliation: the CSU rigorously defends the interests of its conservative – and often rural – Bavarian electorate.

“It’s the fate of the CSU to be the party of a large federal state. To a large extent, the electorate consists of people who currently still commute to work by car,” said the BUND’s Hilgenberg. “He will push hard to advance the interests of his party, its donors, and friends.”

Several experts point out that Scheuer is highly likely to follow in his CSU predecessors’ footsteps by fighting for new roads in Bavaria.

“It’s in the job description of a Bavarian transport minister to secure as much money as possible for ring roads in Bavaria,” said InnoZ’s Knie, adding that this policy also serves to protect the CSU’s outdated idea of an “idyllic family” that owns at least one private car.

“The real problems of a necessary transport transition – including a cut in CO2 emissions, improving air quality, and policies to reduce traffic – were totally neglected by his predecessors, and I fear this will continue unchanged under Scheuer,” added Oeliger.

Dirk Flege, head of the Pro-Rail Alliance lobby group, said Scheuer’s Bavarian background might help when it comes to the pending electrification of rail tracks and the digitalisation of train transport.

“Bavaria has a lot of catching up to do on electrification, and Scheuer will be keen to send the necessary funds to Bavaria,” said Flege. He added that the CSU also considers digitalisation as a core competence, corresponding to its self-portrayal as a modern party rooted in tradition, often summed up in the motto “laptop and lederhosen” [leather breeches].

In his previous job as the CSU’s secretary general, Scheuer made national headlines with his strong anti-immigrant rhetoric. Even though controversial statements are traditionally part of the job description, Scheuer’s statements were so stark that they even drew condemnation from the Catholic Church, of which Scheuer is an avowed member.