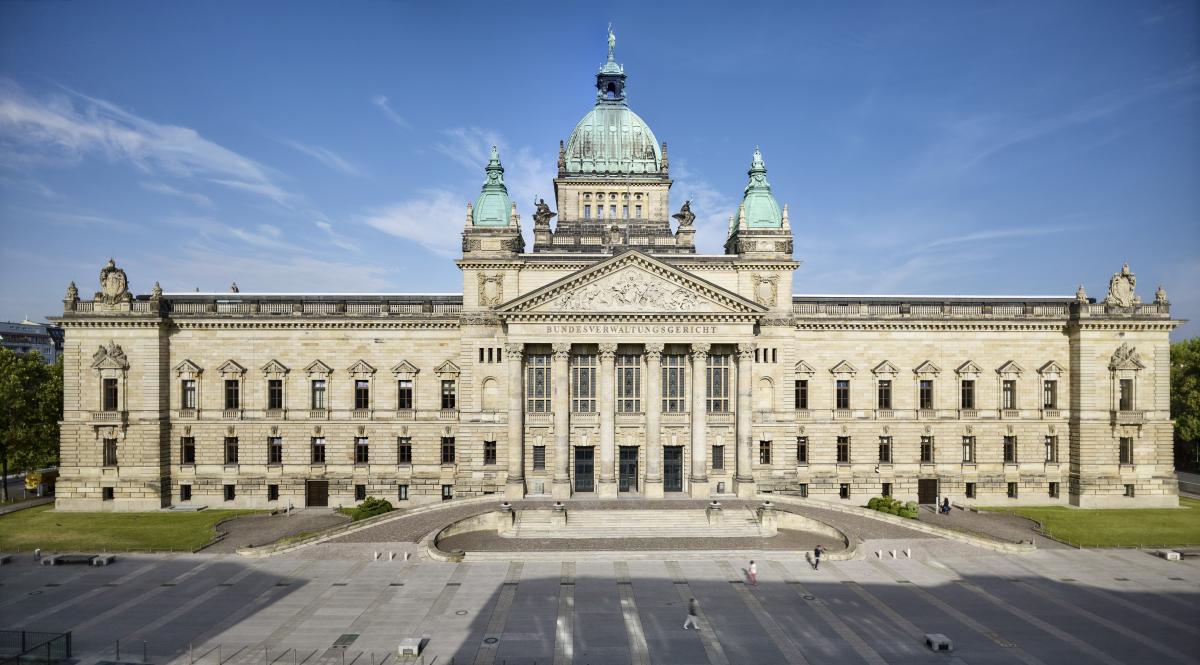 More than two years after the start of the dieselgate scandal, the ruling is likely to hasten the decline of diesel cars, and might prove a boost for electric cars and other low-emission mobility concepts, which will be key to reach Germany’s climate targets.

The judges initially wanted to give their verdict a week earlier but took several days more to deliberate because of the case’s complexity and importance.

“This ruling is a defeat for the federal government, who has completely sided with the car industry,” said Jürgen Resch, head of NGO Environmental Action Germany (DUH), which set the ball rolling on driving bans by suing local administrations over air pollution.

After years of administration failure to curb excessive pollution, local courts had ordered western German cities Stuttgart – home of carmakers Daimler and Porsche – and Düsseldorf to reduce nitrogen dioxide (NO2) below EU limits, if necessary by banning the use of most diesel cars in inner cities.

The federal states, which are in charge of producing plans to cut emissions together with the cities, had countered that driving bans were unlawful and transferred the case to the Federal Administrative Court in Leipzig, which has the last word on such matters. Head judge Andreas Korbmacher said that there was no legal obligation to compensate diesel car owners. "A certain loss in value has to be accepted," Korbmacher said after the ruling was published.

German carmakers’ share prices fell slightly after the ruling was announced mid-day, reports broadcaster ARD. The decision did not really come as a surprise, but triggered uncertainty about the future of the German car industry, said a trader.

The Federal Administrative Court ruled that, in order to enforce EU clean air legislation, cities with high NO2 emissions can introduce driving bans as a last resort. The court specified that this would involve to “gradually introduce bans”, beginning with the oldest and most polluting cars, instead of imposing an all-out ban right away. It also means that there will have to be exemptions for residents and craftspeople doing business in areas with high NO2 levels.

The mayor of Düsseldorf, Social Democrat Thomas Geisel, said the agency for the federal state had now to assess in its update to the city's clean air plan whether a driving ban would be proportionate. His counterpart in Stuttgart, Green politician Fritz Kuhn, said the city was already moving in the right direction without bans. Further air quality improvements depended on additional financial support for public transport and the carmakers actions to lower emissions through new software and a retrofitting of diesel cars.

Any implementation of partial driving bans on some roads or specific zones in German cities will not happen immediately. The Green Party said in an analysis that Hamburg could be the first to act and close some roads to diesel cars. DUH, which has several cases in other cities pending, will likely push for more driving bans all over Germany.

The ban could affect up to 2.8 million vehicles with the emissions standards Euro 1 to Euro 5, according to figures by the Federal Motor Transport Authority (KBA), analysed by business weekly WirtschaftsWoche.

DUH says driving bans are cities’ only option to significantly reduce NO2 levels because diesel car exhausts are responsible for most of the pollutant that causes respiratory diseases and is said to contribute to thousands of premature deaths in Europe every year.

The ruling strictly concerns local nitrogen oxide emissions but will have ramifications for Germany’s climate ambitions. The car-proud country, home to industry giants BMW, Daimler, and Volkswagen, is struggling to manage the shift to a more sustainable transport system and the technological overhaul of its most important export good.

Combustion engine driven cars not only cause local air pollution, but the sector is also responsible for around 20 percent of the country’s greenhouse gas emissions. [Find background on the diesel technology’s impact on clean air and climate in the CLEW article Why the German diesel summit matters for climate and energy.]

The EU has put increasing pressure on Germany to reduce pollution levels in cities that exceed the Union’s air quality rules and sent out a "final warning" to the government to improve air quality last year. Environmental groups say levels of particulate matter exceed EU thresholds in at least 90 German towns and cities.

German Environment Minister Barbara Hendricks was summoned to Brussels in late January to present measures against air pollution, resulting in a hasty and vague announcement that free public transport could be offered in several German cities when air pollution exceeds limit values.

In its declared intention to fend off driving bans “by all means” and protect the powerful auto industry, the federal government has also proposed a range of other measures, such as support for electric cars or bicycle hire schemes.

A measure proposed by the transport ministry (BMVI) to introduce driving bans on selected route sections during times of heavy pollution has been rejected by the municipalities. This approach would create "a patchwork of rules" across the country, "which we want to avoid”, a spokesperson of the German Association of Towns and Municipalities (DStGB) told Welt Online.

Most experts agree the measures proposed by the government are insufficient to reduce pollution levels in the short term. The government has resisted calls for a nationwide “blue badge” to identify low-emission vehicles. But the verdict on driving bans is likely to increase the pressure on authorities to come up with a scheme that will allow for a quick identification of banned cars, should the bans take effect.

A final nail in diesel's coffin?

The ongoing debate over diesel emissions weighs heavily on the sales of diesel cars, which currently account for about one third of Germany's car fleet. There are around 15 million diesel vehicles on German streets but sales of the technology have been in decline ever since the so-called dieselgate scandal broke in late 2015. Carmaker VW was revealed to manipulate its vehicles to produce lower emissions on test stands [See the CLEW dieselgate timeline for background].

According to a survey by car sales website AutoScout24, interest in diesel cars has dropped substantially. Only 14 percent of respondents looking to buy a car would opt for a diesel model, bild.de reported. Diesel cars are also losing appeal in the important used car market. Car bans would "make used diesel cars almost unsalable”, Jürgen Karpinski, president of the German Association for Motor Trade and Repair (ZDK), said.

The decline of the diesel is a blow to German carmakers because they have bet on the technology. The diesel share of new car registrations in Germany is already in sharp decline, dropping from nearly 50 percent at the start of the dieselgate scandal to just over 33 percent at the start of this year. Nevertheless, German carmakers have reported record sales and strong profits as demand for German premium cars remains strong at home and abroad.

Diesel fuel is considerably cheaper than petrol in Germany because of lower taxation levels. The dieselgate scandal has triggered calls to abolish the “diesel subsidy” worth billions of euros per year. VW CEO Matthias Müller was among those calling for an end of the favourable diesel taxation, a move that stunned his companies competitors, and one which was rejected by the transport ministry. 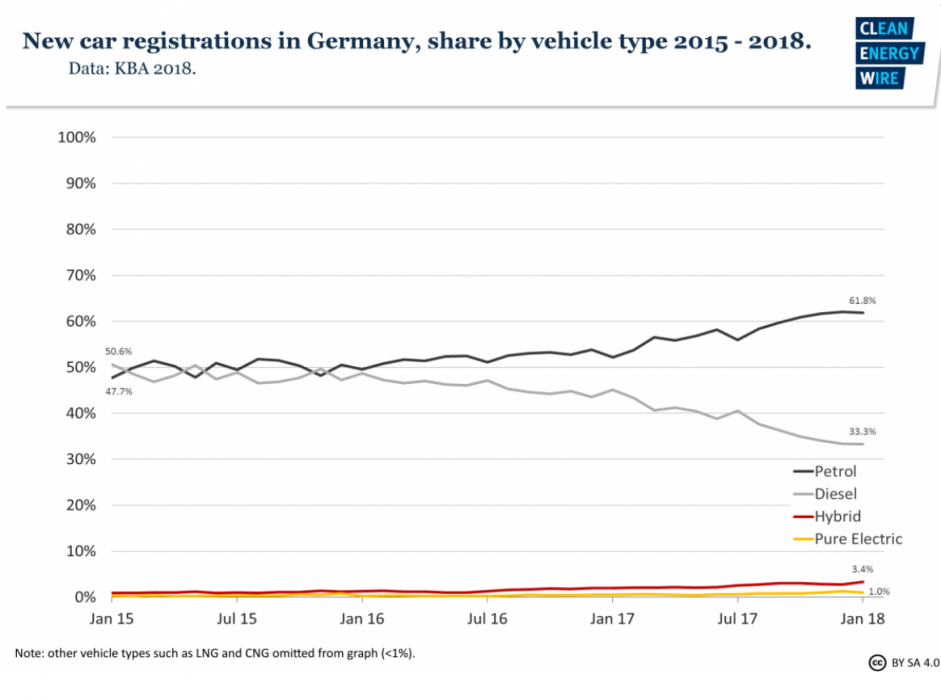 The carmakers have tried to avoid driving bans by using software updates to reduce diesel emissions, but environmental groups say they are insufficient and call for expensive hardware retrofittings.