Factsheet
After elections in 2019, a coalition of the Social Democrats (SPD), conservative CDU and the Green Party have formed Brandenburg's state government. SPD's Dietmar Woidke was re-elected premier of the scarcely populated agriculture state which surrounds metropolitan Berlin and supplies the capital with much of the power it needs. Altogether, Brandenburg exports almost as much electricity to its federal state neighbours as Germany exports to surrounding countries. The bulk of this power comes from lignite, accounting for more than 60 percent of the state's electricity generation in 2016. But Brandenburg also produces the most power from renewables per inhabitant among all German states. The state houses 3,700 wind turbines, 35,000 photovoltaic plants, over 500 biomass plants, and is now looking to become a hydrogen pioneer. Its wind power industry already employs about 7000 people – more than the lignite industry which currently provides about 4500 jobs in the state. As the new state government took office in November, Tesla announced it would build its first European gigafactory for e-car production in Brandenburg. [Update adds new government after 2019 state election.] 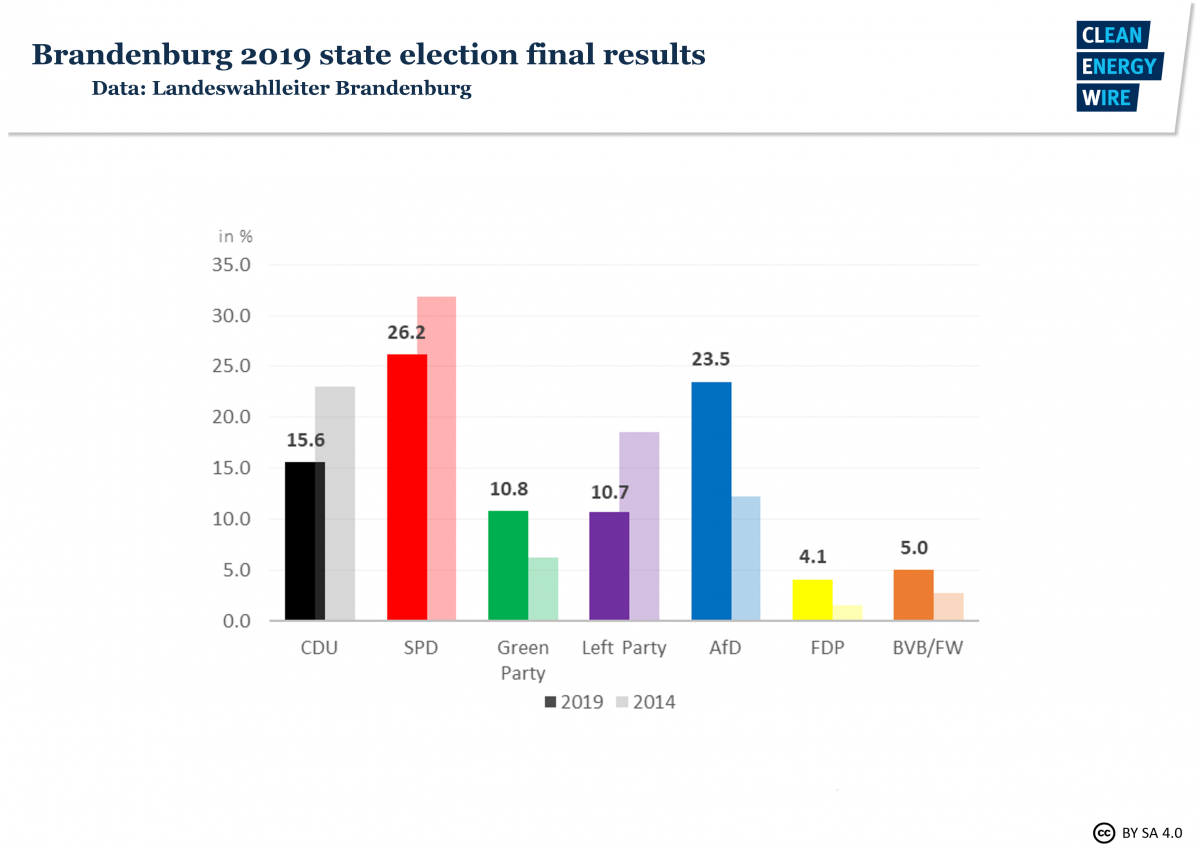 As a mainly rural and lignite-dependent state, Brandenburg is bound to experience upheaval as a result of Germany's planned exit from coal-fired power generation in 2038. The lignite industry is one of the state's largest private employers with 4,500 workers. But state premier Woidke has welcomed the coal exit commission's recommendations, calling them "a good result for Brandenburg and for Lusatia". German coal regions have been promised 40 billion euros by the country's coal exit commission to support structural change.

The new government coalition of the SPD, CDU and the Greens have agreed that there will be no new lignite mines nor expansions of existing ones in the state. Nor will any villages in Brandenburg be resettled due to mining activities, the parties decided during coalition talks.

In July 2018, Brandenburg's former government decided not to update its energy strategy from 2012, stating that lignite was "a major factor in the Brandenburg energy industry" whose future was still to be decided by the federal coal exit commission. Instead, the state updated a catalogue of measures to support the implementation of the old strategy. Brandenburg's energy strategy thus still aims to reduce primary energy consumption by 20 percent by 2030 compared to 2007 levels, while renewable sources should make up 32 percent. The state also aims to reduce CO2 emissions by 72 percent by 2030 compared to 1990 levels. While Brandenburg is working for the expansion of renewable energies, lignite is still stressed as an important "bridging technology" for the state. 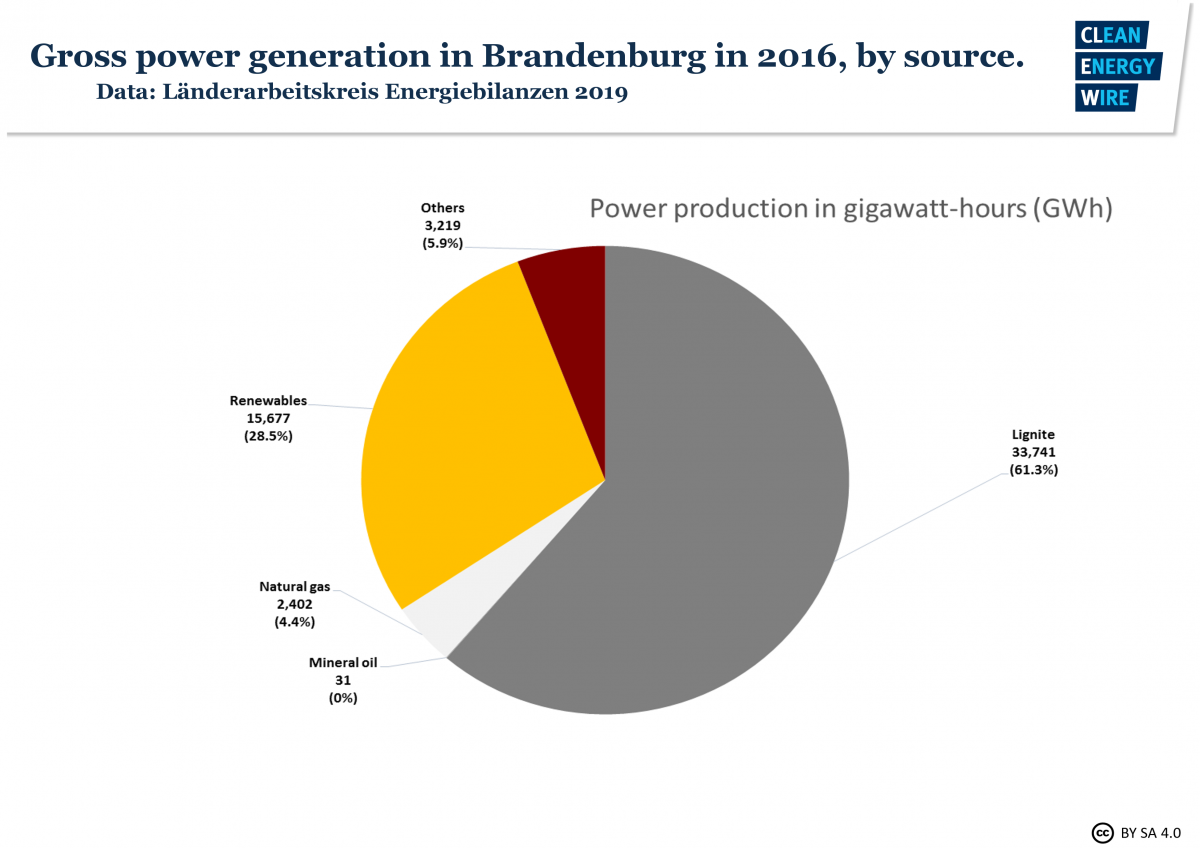 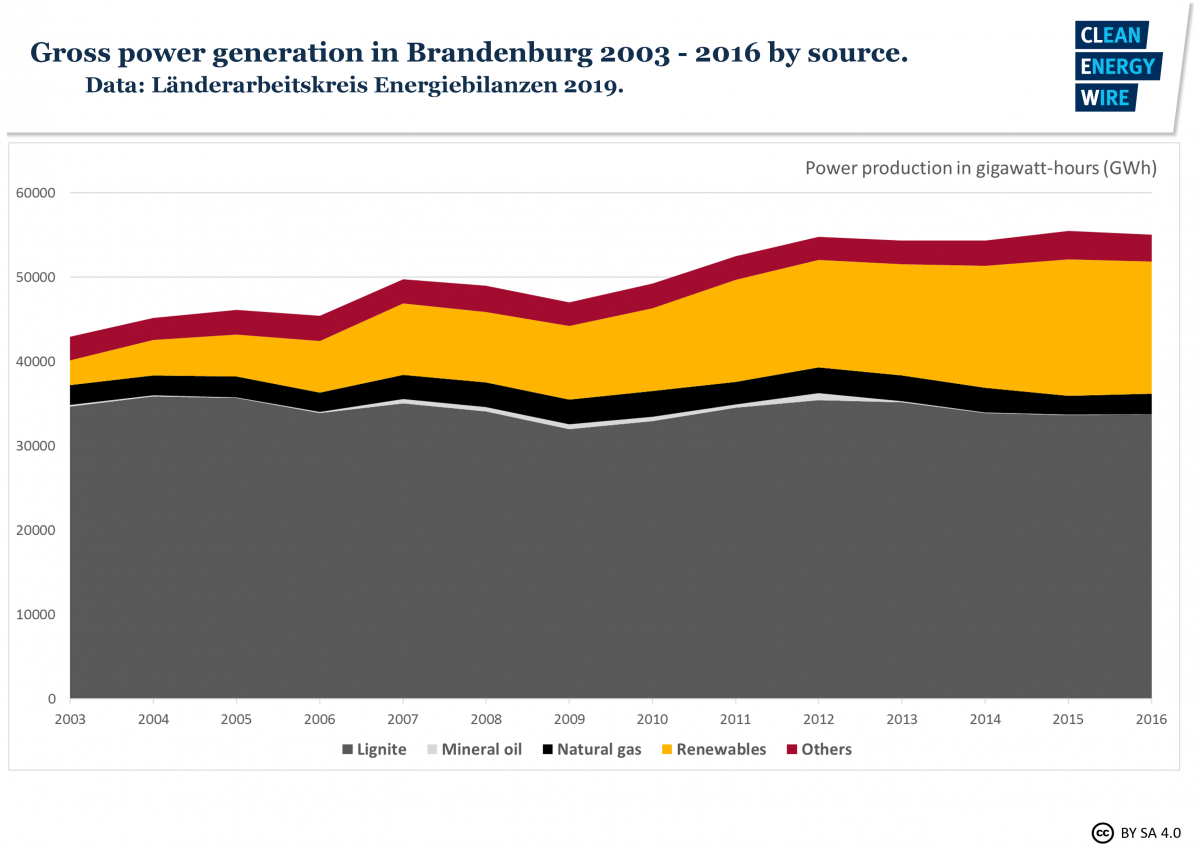 Brandenburg has a strong renewables industry with 16.2 percent of its power production covered by wind, 5.2 percent by solar and 6.7 percent by bioenergy. With the second-highest number of wind turbines of all German states, Brandenburg's wind power industry already employs more people than that of lignite - about 7,000 people. In June 2019, Brandenburg adopted a law stating that municipalities will receive a share of the profits generated by wind farms in order to increase acceptance among citizens.

The state ministry of economy and energy presented a study in August 2019 highlighting how Brandenburg could become a "pioneering region for a hydrogen economy", attracting 7,000 new jobs. The state already houses the world's first hybrid power plant which opened in 2013. Lignite mine and power plant operator LEAG is currently building a large-scale battery on the border between Brandenburg and the neighbouring state of Saxony, where elections are also to be held in September 2019.

In November 2019, Tesla announced it would build a gigafactory for batteries and electric vehicles in Grünheide, Brandenburg. A strong local supply of renewable energy was key for Tesla's investment decision, said the regional government. German daily Bild reported that Tesla plans to invest around four billion euros in the factory, creating 3,000 jobs in a first step, which could be ramped up to 7,000 in a later stage. Start of construction is planned for early 2020, operation for 2021.