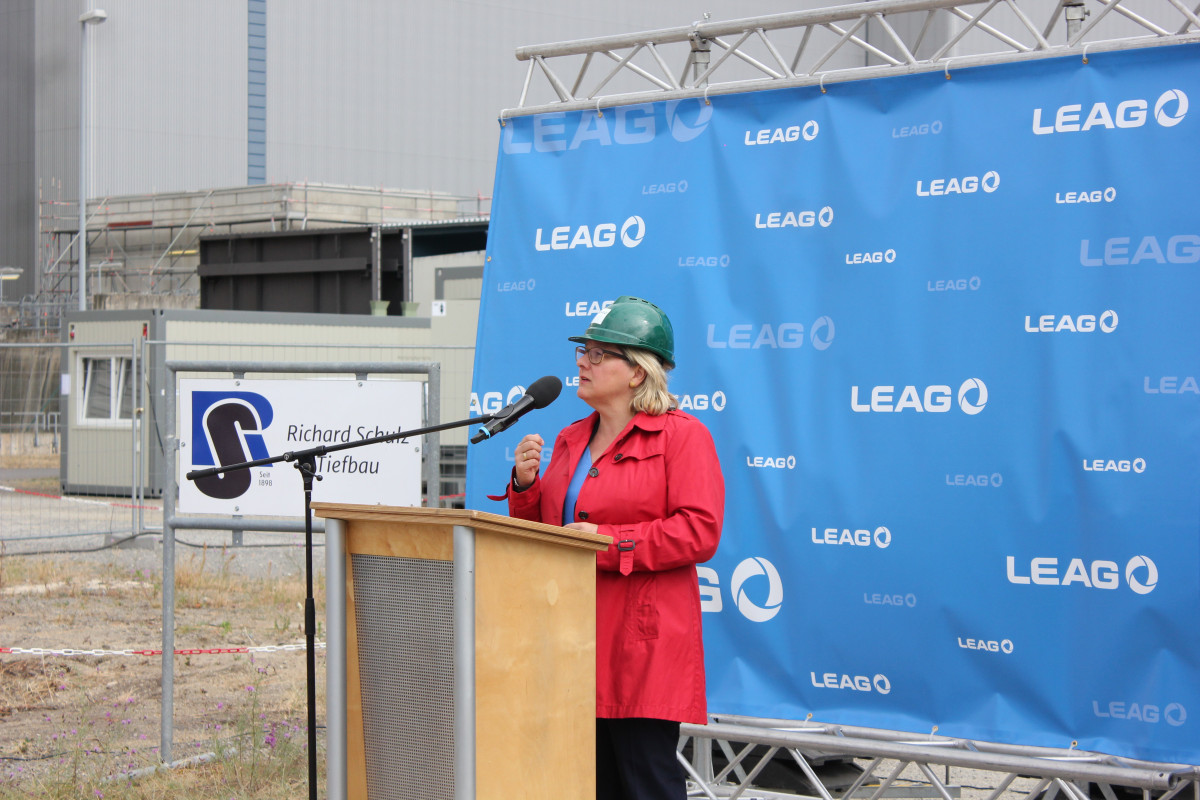 Federal environment minister Svenja Schulze lauded the BigBattery project on her trip to the region of Lusatia, which will be heavily affected by Germany’s planned exit from coal-fired power generation. Photo: CLEW/Eriksen.

LEAG, eastern Germany’s largest energy and mining company, is building a 50 MW battery that could help stabilise the country’s electricity grid partly through renewable energy. Environment minister Svenja Schulze lauded the project in Lusatia, a region which is still very dependent on coal mining and power production and will be strongly affected by the country’s decision to phase out the fossil fuel.

Eastern Germany’s largest energy company and lignite mine operator, LEAG, has started work on a large-scale storage project that could help close a gap in the energy transition by enabling easier integration of renewable energy in the power grid. It will consist of a lithium-ion battery with a planned capacity of 50 megawatts (MW).

The battery will store electricity from the German power grid generated by a variety of energy sources (the mix in 2018 was nearly 35 percent renewables, more than 50 percent fossil fuels and almost 12 percent nuclear).

Although it will not only store renewable energy, its intelligent connection with a power plant control system can provide insights that LEAG hopes will “generate application examples for other industry sectors”. The energy company touts the project as “the only one of its kind in Europe” as it “combines modern power plant infrastructure with storage technology in a completely new order of magnitude”. The state of Brandenburg is supporting the project with 25 million euros.

In the long run, storage facilities like the so-called BigBattery could provide the missing link in the German energy transition. Electricity from renewable sources is not available at all times. Finding ways to store the energy generated by weather-dependent renewables could therefore be an important element for the country's Energiewende as Germany seeks to completely phase out coal-fired power generation by 2038 at the latest, as recommended by the country’s coal exit commission.

Federal environment minister Svenja Schulze lauded the project on a trip to the region, which will be heavily affected by the country’s planned exit from coal-fired power generation. Economically weak regions in the east, in particular the mining region of Lusatia, which is located in the states of Brandenburg and Saxony, still very much depend on coal as a source of income and jobs.

„Our colleagues see the German government's energy and #climate policy not as an encouragement, but as a threat.“ Worker’s council of energy company LEAG‘s message to environment minister Svenja Schulze visiting their power plant. #Energiewende #JustTransition #energytransition pic.twitter.com/vCBhpH1YAd

Members of LEAG’s workers’ council held a protest demanding a just transition during the minister’s visit of the power plant and the opening of the BigBattery project. Climate and energy policy is set to play a role in the upcoming elections in eastern Germany. The far-right party Alternative für Deutschland (AfD) is exploiting anti-government sentiments to discredit the fossil fuel phase-out and the expansion of renewables by calling them "imposed ordeals". However, energy transition technology is also widely used in the eastern states and is a growing industry in several municipalities.

Until now, LEAG has operated lignite mines, whose coal has fired four conventional power plants and been refined to create fuel. "With the installation of this large electrical storage unit, LEAG is becoming actively involved in a technological environment that offers a wide range of potential for the future,” Helmar Rendez, head of LEAG’s management board, said in a press release. "In order to develop LEAG into a broadly-based energy company, we require time and a reliable regulatory framework,” he added.

The 6,800-square-meter storage facility’s future capacity would correspond to about three percent of the installed capacity of its neighbour, the Schwarze Pumpe power station. It is planned to begin storing electricity in the summer of 2020.

Partnering with the Schwarze Pumpe industry park association, other industrial players and research institutions, LEAG has also applied for the funding of a hydrogen storage and power plant. If funded, this pilot project could likewise contribute to securing grid stability while enabling experiments on using hydrogen for sector coupling.

Storage: How renewable energy could stabilise the power grid

Finding ways to store electricity from renewable sources could provide an alternative way of protecting the German power grid from fluctuations and ultimately avoiding blackouts. In the power grid, energy consumption and generation must always be balanced out. Transmission system operators (TSOs) therefore provide so-called ‘control’ or ‘balancing’ energy which can be fed into the grid within a number of seconds or minutes if a shortage of energy occurs. Until now, this control energy has come from conventional power plants, which are not affected by weather conditions and therefore can offer a stabile supply at all times. If renewable electricity could be stored and used as a backup – or control energy – it would also be available at any time. Find out more in CLEW’s analysis on storage.

Electricity storage is next feat for Germany’s energy transition