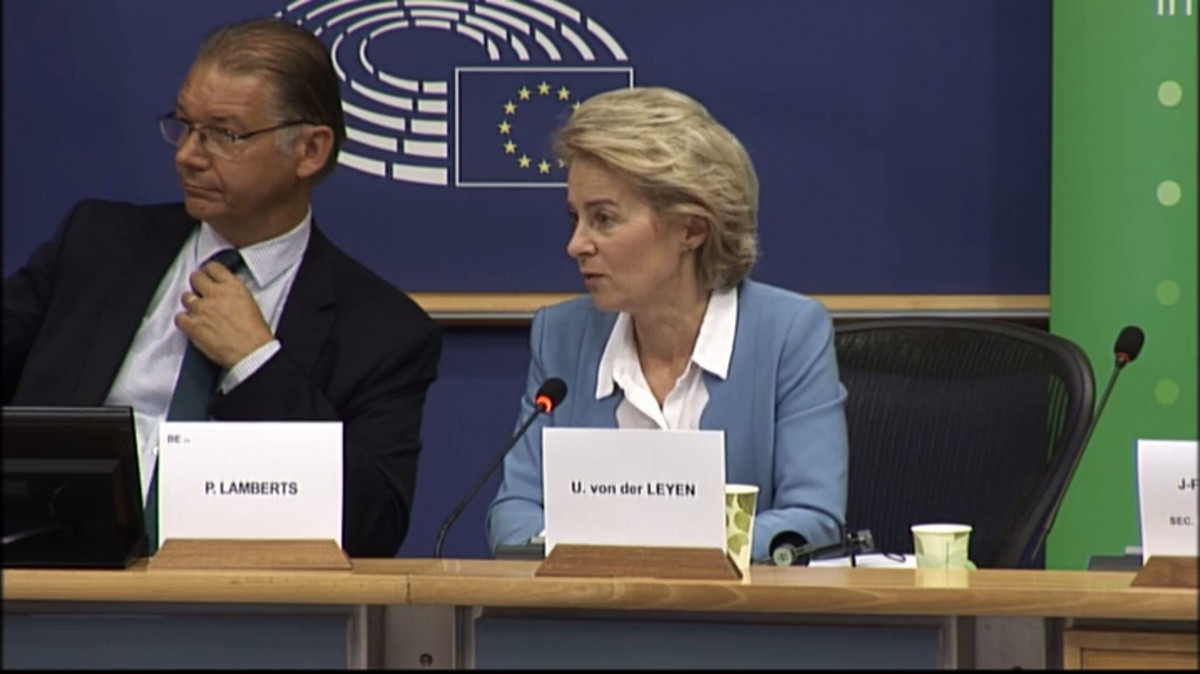 The German candidate for the top job in the European Commission Ursula von der Leyen told European parliamentarians that tackling climate change is a top priority for the EU. She said the bloc's emission reduction goal could be stepped up to a 50 percent decrease by 2030. Media observers said it was still unclear whether von der Leyen, whose nomination had irritated many observers and parliamentarians, convinced enough members of parliament during a series of hearings. The Greens decided not to support her candidacy in a planned vote next week and members of other groups remained sceptical, and demanded to postpone the vote.

Climate action is the “topic number one” for the European Union over the coming years, German defence minister and candidate for European Commission president Ursula von der Leyen (CDU) told European parliamentarians during a hearing.

“The clock is ticking and I’m absolutely aware it’s high time to move,” she told members of the Greens/European Free Alliance political group in the European Parliament. Following hearings with other groups of the parliament, von der Leyen added that she is “absolutely committed” to the goal of climate neutrality by 2050.

“I want Europe to become first climate neutral continent,” said the conservative. Climate and energy policy have never been her brief or the focus of her political engagement, though she indicated in recent comments that she took the climate crisis seriously. Commentators saw her as “well briefed” on climate issues at the meetings with parliamentary groups.

Von der Leyen stressed the need to take the people along in the process of getting the continent climate neutral. Not all countries were at the same starting point, and the European Union had to support those countries to mitigate the impact of the transition, she said, pointing to the compensation payments to coal regions in Germany's coal exit plan.

The German minister also said she is convinced the EU could raise its 2030 greenhouse gas reduction target from the current 40 percent to 50 percent (compared to 1990 levels). The Greens noted that this was below the 55 percent reduction the parliament has called for in a resolution earlier this year.

“You are asking us to lower our climate ambition,” said Greens/EFA group member Bas Eickhout. After the meeting, the group decided not to support von der Leyen’s candidacy in a planned vote next week. “We didn't hear concrete proposals from Ursula von der Leyen, be it on rule of law or on climate,” Greens/EFA head Ska Keller wrote in a message on Twitter.

We didn't hear concrete proposals from Ursula @vonderleyen, be it on rule of law or on #climate. We have been elected for a mandate of change and we don't see how this will be possible with her. This is why as @greensefa we decided not to support her candidacy next week.

Some of the other parliamentarian groups also remained sceptical. French Socialists suggested to postpone the vote on von der Leyen to give more time to get more precise answers from her. They criticised her “vague” performance. “She showed neither agreement nor disagreement with almost anyone, particularly in the fields of climate and the environment, without making any proposals for action,” they wrote in a statement.

The European Parliament is due to vote on her candidacy next week. Von der Leyen needs the backing of an absolute majority of 376 votes in the 751-strong chamber to get confirmed as president of the European Commission. Her nomination has caused severe irritations because she was not one of the leading candidates in the European parliament elections and emerged as a leading candidate only after days of horse-trading of European leaders. First media reports said von der Leyen overall failed to fully overcome scepticism among parliamentarians.

Von der Leyen also stressed that the EU had to think about integrating mobility and buildings into the European emission trading system. She later dodged a question whether she was willing to put forward the measures that would get the carbon price to a level that would have the same impact in cleaning up cars as the current system of emissions standards. Von der Leyen also pointed to the need to think about the impact of climate policies on companies and the potential need to compensate in order to avoid carbon leakage, i.e. the move of carbon-intensive production to countries outside the EU.

Von der Leyen is seen as one of the closest and most long-standing allies of German chancellor Angela Merkel and has served in all her governments as minister since 2005.