Factsheet
Companies have broadly mixed attitudes towards the Energiewende, depending on their sector, the size of their business, or location. Polls and analyses help explain their views. [UPDATE - Adds DIHK Energiewende Barometer 2017]

After a notable improvement of the energy transition's perception by German companies in 2016, the DIHK's survey "Energiewende Barometer 2017" revealed that many businesses consider additional power price surcharges the biggest burden in energy policy. However, the Energiewende's overall perception among surveyed companies remained slightly positive in 2017, and even improved by a small margin, the DIHK said. In 2016, companies had evaluated the influence of the energy transition on their competitiveness as generally positive for the first time ever.

But high power prices, which were already viewed critical in 2016, had become "a real disadvantage” for industrial companies in 2017, DIHK president Eric Schweitzer said. The surveyed companies appealed to the government to make lower levies on electricity a priority after the elections.

The association asked 2,250 companies (42 percent from industry, 4 percent from construction, 14 percent from trade and retail, and 40 percent from the service sector) the following question: "How do you evaluate the overall effects of the Energiewende on the competitiveness of your company?"

The ongoing positive trend "is mainly sustained by a shift from neutral to positive assessments," the business association says. Very few companies had joined the ranks of those saying the gradual shift to a decarbonised energy system was creating an additional benefit for their business.

Yet, while industrial companies were the branch most critical of the energy transition, a slight improvement of the average attitude could be observed among surveyed companies, which mainly was down to low gas and oil prices, the DIHK says. The construction sector had the most favourable view of the Energiewende in terms of its own business prospects, it adds. 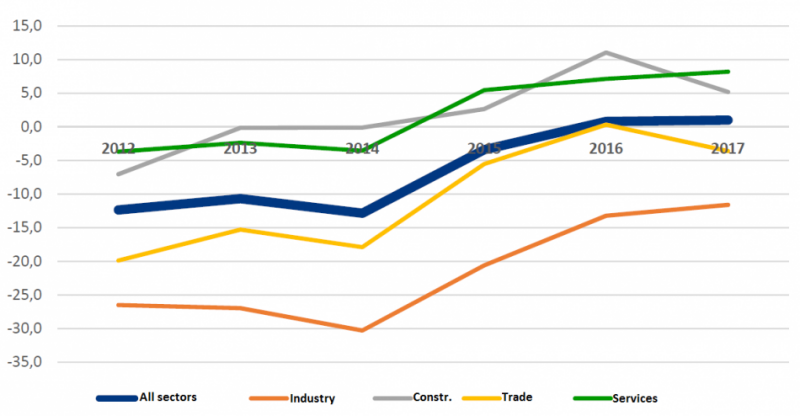 The "purely national" burden of high additional power costs - grid fees, the renewables surcharge and other levies that account for about 80 percent of every euro paid per kilowatt hour - led many companies to adjust their business practices. Four out of five companies said they had already invested in energy efficiency measures and 38 percent answered they were currently undergoing investments.

Others said they intended to generate their own power, for instance by installing solar panels on their roof (10 percent). However, around five percent said they had lowered its production volumes in Germany or moved parts of their business abroad to cope with the power price burden, while nine percent stated they were currently implementing this approach.

Just like in the previous year, companies with less than 20 employees on average regarded the Energiewende as positive for their business. Larger companies reported mostly negative effects, mainly due to their generally higher power consumption, the DIHK says.

The overall perception of the Energiewende may have stayed positive for the second time in a row, but respondents voiced concerns over a number of aspects besides high power surcharges, according to DIHK. Despite Germany's power system being one of the most stable in the world, 16 percent of companies said they experienced power cuts of less than three minutes in the past twelve months. For industrial companies, the figure climbed to 24 percent.

Supply security was slightly worse in the South than in the North, partly explaining the companies' call for a rapid implementation of planned grid expansion. 87 percent of all surveyed companies said political parties "should close ranks and support grid expansion," the DIHK says.

Differences in regional perceptions of the Energiewende also remain. Companies from Northern and Southern Germany said they generally benefitted from the transition, while businesses from the West and East generally saw it as less beneficial or even damaging to their competitiveness. 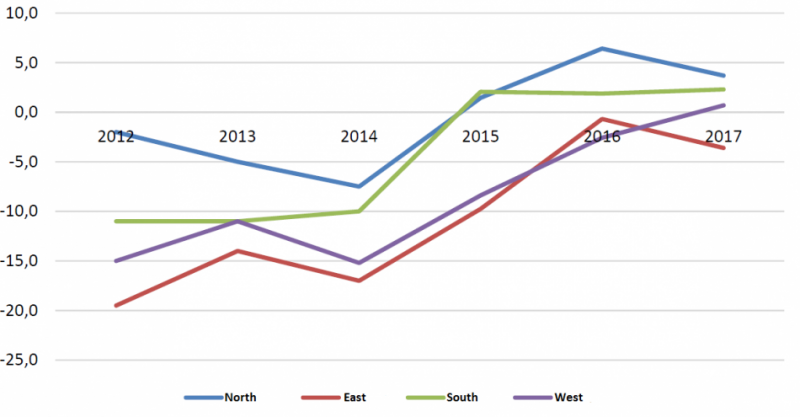 Most German engineering firms believe the Energiewende is good for their own business, and good for Germany as a business location more broadly, according to a poll by the German Engineering Federation (VDMA).

Approval rates rose significantly in 2016 compared to 2015, with 63 percent of companies saying the energy transition already had a positive impact on their business, and 73 percent expecting it to have a positive impact in the future. This year, a majority of 61 percent of respondents said the Energiewende would benefit industrial Germany as a whole, compared to just 45 percent in 2014. 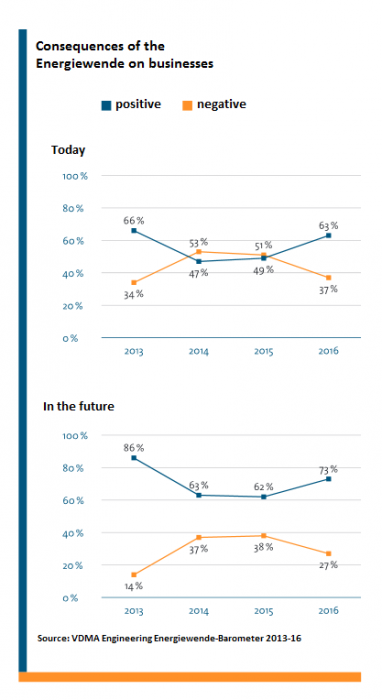 333 companies responded to the VDMA’s fifth survey since 2011 - around 12 percent of all companies contacted - including manufacturers of components for renewable facilities, fossil power plants, and grid components, and suppliers of IT infrastructure for energy providers and power storage facilities, among others.

Around 40 percent said the energy transition would boost their sales volume. 60 percent expected their sales volumes to rise in the future both domestically and abroad. 44 percent were confident of unlocking new business segments in the future, thanks to the Energiewende. The segments they were most confident of tapping into were energy efficiency, renewables, energy storage, digitalisation, and also conventional power generation. 70 percent believed their customers would invest more in efficient technologies in the future.

Still, companies remained critical of the government. 80 percent said they were dissatisfied with the energy transition's current political implementation - although compared to 2014, this represents a rise of 9 percentage points in approval of government’s management of the Energiewende.

Approval rates were lowest for the government’s record on transmission grid expansion (9 percent), cooperation between Germany’s states and the federal government (11 percent), and measures to increase energy efficiency (18 percent). The shift to an auction system for further renewable expansion under the reformed Renewable Energy Act (EEG) had the highest approval rate at 32 percent, although 57 percent of companies still were not satisfied with it.

While most companies said their power bill had increased over the course of the Energiewende, a clear majority said it did so only moderately and would not affect their competitiveness (73 percent). 84 percent of the companies surveyed said the distribution of Energiewende costs was opaque, and 82 percent regarded their distribution as unfair. 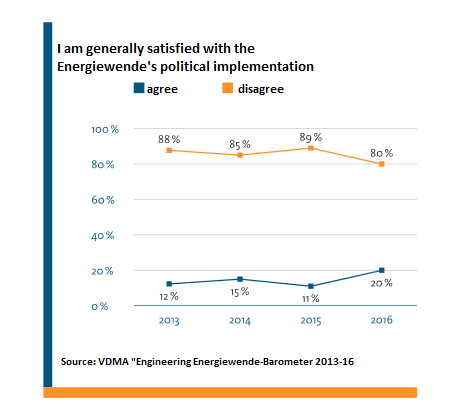 Consultancy McKinsey’s bi-annual Energiewende Index assesses the current status of the energy transition based on three main categories: climate and environmental protection, security of energy supply, and economic feasibility. For each category, McKinsey has developed five indicators that allow progress towards a 2020 goal to be measured, mainly focusing on the power sector.

McKinsey found that there is a widening gap between “unrealistic” targets that are unlikely to be met, and others that are going to be even exceeded among the 15 areas covered by the indicators.

Seven targets to thought to be “realistic”: PV expansion, reliability of power supply, secure capacity reserve, renewable energy jobs, employment in energy intensive industries, expansion of offshore wind farms, as well as their grid connection. According to the analysis, it seems likely that offshore wind expansion and the secure capacity reserve will significantly exceed targets, with wind power capacities already reaching 170 percent and reserves 292 percent of the current target value.

Targets deemed to be out of reach in seven other areas covered by the indicators are: household power prices, industry power prices, the size of the renewable surcharge, CO2 emissions, primary energy consumption, as well as power consumption. McKinsey laments in particular the strong rise in grid intervention costs caused by fluctuating supply from renewable sources.

The rising number of re-dispatch measures can mainly be attributed to bottlenecks in the North-South-corridor of German network operators, McKinsey found. The indicator grid expansion is therefore judged to need “adjustment” in order to meet its target. About 615 kilometres of power lines have been added - but reaching the goal of 1,887 kilometres by 2020 is thought to be “more than unlikely given the present status of political debate”.

“Only if the energy transition, including grid expansion, is being planned and implemented in an integrated and purposeful manner can Germany achieve its goals regarding the expansion of renewables and CO2-reduction”, the analysis concludes. While the country had been a role model for expanding renewable energy production, it now needed to become a trailblazer for systems integration by establishing a larger and more flexible grid.

All texts created by the Clean Energy Wire are available under a “Creative Commons Attribution 4.0 International Licence (CC BY 4.0)”. They can be copied, shared and made publicly accessible by users so long as they give appropriate credit, provide a link to the license, and indicate if changes were made.