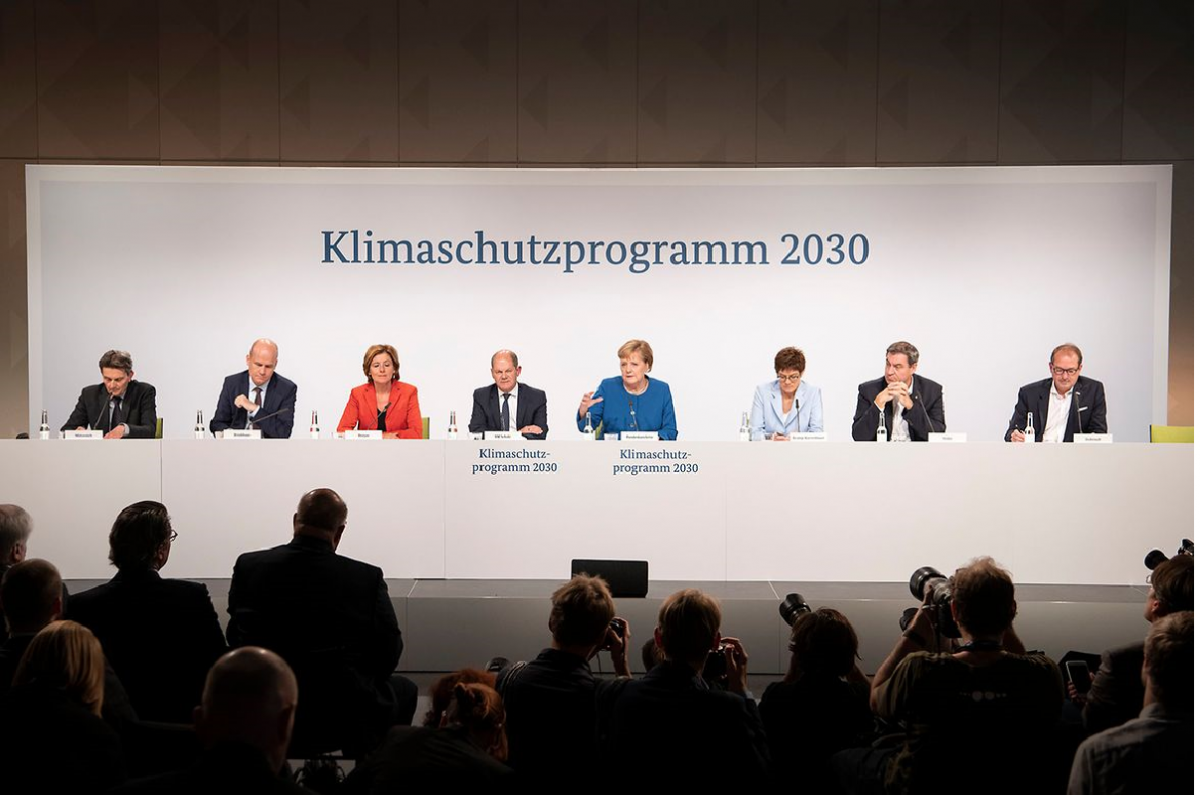 The future of Germany's much criticised climate strategy hangs in the balance as the Green Party vowed to amend the package, and experts warned legal hurdles threatened the government's concept for a CO2 price. Yet, Chancellor Angela Merkel might still be able to bolster her image as the “climate chancellor” at this week's UN Climate Action Summit in New York.

The German government's much anticipated Climate Action Programm 2030 has been met with criticism by climate activists, scientists and opposition parties that could lead to prolonged disputes over the package's implementation. The Green Party has said it will try to amend the package, which introduces carbon pricing in the transport and heating sector, through its influence in Germany's council of federal states, the Bundesrat, calling the pricing mechanism that starts with a price of 10 euros per tonne of CO2 by 2021 a “joke”.

Green co-leader Robert Habeck told broadcaster ARD in an interview that the Greens would try to eke out as much as possible for stronger climate action through its influence in the Bundesrat, where the party has significant influence thanks to its participation in many state governments. "Many of the measures affect policymaking at the federal state level. We will therefore try to change the lack of ambition that prevailed in the climate package," Habeck said. The key aim of the Greens is to ensure that the carbon pricing mechanism in the transport and heating sector is made "effective" through raising the price to at least 40 euros per tonne. Habeck added, however, that it was unlikely that initiatives in the Bundesrat could achieve enough to make the package compatible with the Paris Agreement's goals. The Greens are currently members in nine out of 16 state governments and have entered coalition talks in two other states, Brandenburg and Saxony. The Bundesrat's consent is necessary for many laws in Germany.

Merkel meanwhile headed to the US to speak at the UN Climate Action Summit. Addressing other heads of state, Merkel urged the UN to heed the advice of scientists and accept the challenges posed by global warming. She said while Germany only accounts for one percent of the world's population, it emits two percent of total greenhouse gas emissions. "If everyone acted the way we do, global emissions would double. And everyone knows what this means." Merkel reiterated the government's aim to cut emissions by 55 percent compared to 1990 levels by 2030 and to reach climate-neutrality by 2050. In New York, the German Chancellor also met with Swedish climate activist Greta Thunberg, who helped inspire the global Fridays for Future climate protests for more ambitious climate action.

Media commentators in Germany pondered whether Merkel might actually be able to uphold her image as "climate chancellor" on the international stage despite the criticism at home. "She could be greeted quite differently on her arrival compared to the way she was bid farewell in Berlin,” newspaper Rheinische Post wrote. In contrast to heads of state like US President Donald Trump or Brazilian President Jair Bolsonaro, both of whom have repeatedly questioned the scientific consensus on climate change, Merkel can at least demonstrate that something is being done in Germany, irrespective of the measures’ individual effectiveness, the newspaper said.

Green Party co-leader Annalena Baerbock told news agency dpa that her party would seek to tighten the government's climate action programme through the Bundesrat. "We will keep petitioning for a true transition in the transport sector and an end to the fossil combustion engine," Baerbock said. In a written statement, Baerbock said the government's climate policy ideas had left her "deeply disappointed" and that they amounted to a "withdrawal from the Paris Agreement”, adding that the CO2 price would be "a joke" that comes too late.

Economy and energy minister Peter Altmaier countered the Greens "should not overestimate their clout." The conservative CDU politician told Funke Mediengruppe the Greens do not have a majority in Germany's Bundesrat and their resistance "could threaten the entire climate package."

From ideas to laws – how Energiewende policy is shaped

The package presented on 20 September by the government coalition of Merkel's conservative CDU/CSU alliance and the Social Democrats (SPD) is supposed to ensure that Germany meets its 2030 greenhouse gas emission reduction targets. In addition to introducing a carbon price in most sectors of the economy, it confirms the goal of ending coal-fired power production no later than 2038 and contains promises to substantially increase the share of renewables in power consumption. Moreover, the package devised by Germany's so-called climate cabinet proposes a monitoring mechanism to ensure that sectoral emission reduction targets are met. According to environment minister Svenja Schulze, this means that Germany's climate targets are now "going to be legally defined for the first time”

However, Thorsten Müller of the Foundation for Environmental Energy Law told energy policy newsletter Tagesspiegel Background that the carbon pricing mechanism proposed by the government could actually face severe legal hurdles. Müller said the pricing mechanism could be viewed as a tax from a legal perspective for which there was no legal basis. "You cannot call it a consumption tax, CO2 is no valid connecting factor for that," Müller said. The legal expert said the carbon pricing model proposed by the government meant that climate or environmental action would have to be established as an individual taxation category, a step that requires a two-thirds majority in parliament. The government coalition would not even reach that threshold if it managed to convince the Green Party to vote for it.

Patrick Graichen, head of energy transition think tank Agora Energiewende*, also warned that the carbon pricing mechanism's introduction was uncertain as it might face substantial legal hurdles in the way it was planned. Graichen added that the proposed measures would at best reduce emissions by a third of what's necessary to reach the country's climate targets. The low CO2 price means Germany is going to exceed EU emission limits from next year, Graichen said during a press briefing. He added that the new strategy also failed to increase the chances of reaching Germany's targets for renewables expansion.

Markus Söder, state premier of Bavaria and head of the CSU, the conservative sister party of Merkel's CDU, said the climate proposals would help Merkel to present Germany as an ambitious climate policy leader at the UN summit. Söder called the introduction of carbon pricing "a revolution" for Germany that would make the country "a leader in terms of climate action on the one hand and preserving prosperity and economic growth on the other." In an interview with ARD, he insisted that effective climate policy "has to be done together with the citizens and not against them”, arguing that "radical" proposals would ultimately do more harm than good. "What we have put on the table now is a solid ecologic package on middle ground." He added that the government's handling of the transport sector represented "an intelligent system in which Germany demonstrates how things can be done”.

Friedrich Merz, former contender for CDU leadership and a prominent voice among the party's traditional conservatives, called the climate programme "a decent package" that meant Germany was “doing justice to its claim to be a pioneer" and could "with a clear conscience call on other states at major conferences to do more as well”. In a commentary in newspaper Die Welt, Merz warned against more ambitious climate action and said many activists actually intended to "destroy our market economy”. An approach that comes with more regulation to reduce emissions could lead to "an unprecedented de-industrialisation of our country, which would endanger millions of jobs and dramatically deepen the division of our society”, Merz wrote.

SPD members voiced more criticism of the climate package than their conservative counterparts, even though their own party helped broker it. Left-leaning MP Karl Lauterbach called the programme "expensive botch" and a fatal signal for German climate policy, Spiegel Online reports. The health expert and SPD-leadership hopeful likened the low price level to ineffective medication and said the compromise made with the conservatives demonstrated that his party could no longer stay in the coalition. Other SPD politicians competing for the party's vacant leadership position also criticized the package, meaning that climate policy could become a crucial topic once the Social Democrats decide on the current government coalition's future before the end of the year.

Two of the government's most important climate policy advisors also made clear they were not quite satisfied with the results. Climate economist Ottmar Edenhofer, director of the MCC research institute and climate policy advisor for the government, said that while the package made "the architecture" of a comprehensive carbon pricing system visible, the price was far too low to have a steering effect. Under the package, carbon emissions in transport and heating would cost 10 euros per tonne by 2021 and the price would gradually increase to 35 euros by 2025. "By contrast, a sensible entry price would be 50 euros per tonne of CO2 and rise to 130 euros by the end of the next decade," Edenhofer said.

Economist Christoph Schmidt, president of research institute RWI and head of the German Council of Economic Experts, said some of the decisions "point in the right direction" but failed to deliver the promised "big leap" and watered down the signal intended with carbon pricing. It was rather uncertain whether the measures mean that that the emission reduction "bindingly promised in Europe by 2030 is achieved effectively and cost-effectively”, he added.

* Like the Clean Energy Wire, Agora Energiewende is a project funded by Stiftung Mercator and the European Climate Foundation.