Germany’s environment ministry fears high emissions from coal-fired power plants and transport will make the country miss its 2020 climate targets by a wider margin than previously anticipated. The ministry’s warning in an internal paper seen by the Clean Energy Wire adds further pressure to make fast progress on climate-related issues in upcoming talks aimed at forming a new government following September’s general elections. Without further action, CO2 emissions will only be 31.7 to 32.5 percent below 1990 levels, the paper shows. Given the official target of cutting emissions by 40 percent, the ministry warns that a failure of this magnitude would constitute a “significant blow to Germany’s climate policy”, and would amount to “a disaster for Germany’s international reputation as a climate leader.” 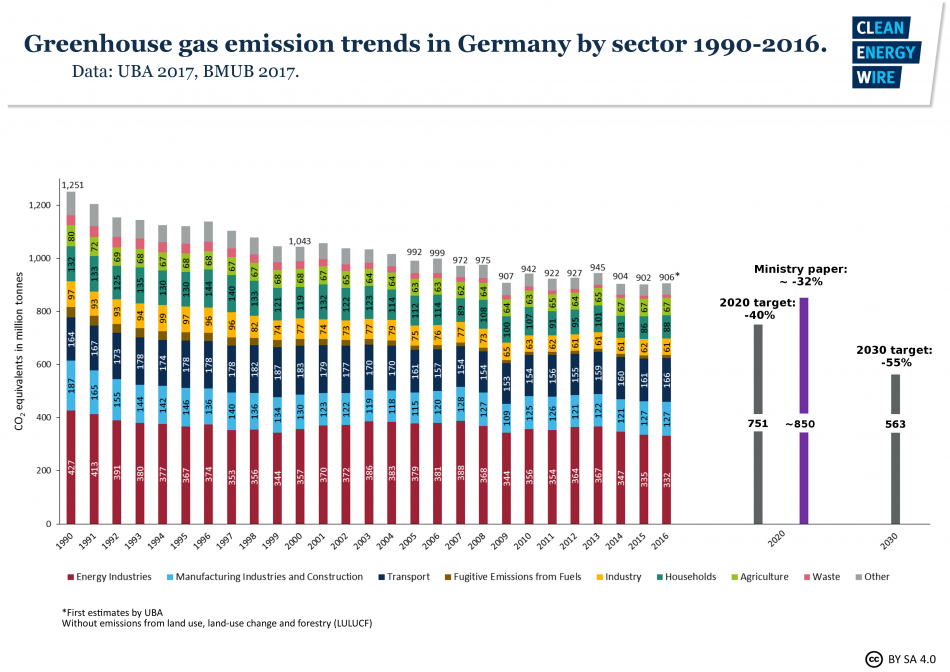 Read the full article by the Clean Energy Wire here.

Germany’s largest mining trade union has called on the next federal government to assign the tasks related to energy, transport, and housing policies to a ‘ministry of energy transition’. This would help the country avoid the current “uncoordinated patchwork” in its energy transformation-related policies, said IG BCE head Michael Vassiliadis at a union conference in Hanover. The union head also called on the next government to give coal mining regions undergoing structural change a “sufficiently financed reliable prospect” for the future. Germany aims to make its energy supply largely CO₂-neutral by 2050, and the country’s lignite mines would be "largely out of use" by then. Yet, NGOs and certain political camps are conducting “hysterical campaigns” against coal, he said. Addressing the possible alliance of Merkel’s conservatives (CDU/CSU) with the Free Democrats (FDP) and the Green Party – a so-called ‘Jamaica coalition’ – and a potential coal exit agreement, Vassiliadis said: “There actually are fears that our people in the mining areas will have to foot the bill for the ‘Jamaica’ wedding party”. The IG BCE stands by the climate targets agreed in Paris. “No ifs and buts. And Paris is not the problem”, he said. Instead, it is the German policy that does not live up to the climate agreement. While the Energiewende is expensive and costs jobs, its targets are not reached, said Vassiliadis.

For background on Germany’s future government coalition read CLEW’s coalition watch, and check out the factsheet When will Germany finally ditch coal?

The hidden costs of conventional energy sources in Germany amount to 38 billion euros, compared to the 24.5 billion euros worth of EEG surcharge, which is paid directly by consumers with their power bill to support renewable energy generation. Researchers at Green Budget Germany (FÖS) have calculated that state subsidies, tax breaks, and societal burdens like health and environmental costs caused by nuclear and fossil power generation would translate into a 11.4 euro cents/kilowatt-hour levy on the power price in 2016, compared to 6.35 euro cents for renewable power that year. These hidden costs are paid by society via taxes and other fees.

Read the press release, and find the study in German here.

For background, find a CLEW factsheet on what German households pay for power here.

The avalanche of press reports on the 2015 Paris Climate Summit reached the majority of the German public, but didn’t trigger any changes in their attitude towards climate change, a study by Michael Brüggemann et al from the University of Hamburg has found. The team asked 1,121 people about their knowledge of and attitude towards climate change before, during, and after the Paris conference. During the conference, the respondents’ trust in the global community’s ability to successfully tackle global warming increased, but their willingness to engage in climate protection efforts themselves did not.

Read the article here (behind paywall).

The state government of Thuringia in central Germany opposes the construction of new power lines connecting it with Bavaria because these would cut through a rich cultural and natural landscape, Welt Online reports. They also reject three alternative routes suggested by the Federal Network Agency, and say that the existing lines should be upgraded instead.

Read the article in German here. Read a CLEW dossier on the German power grid here.

The German port city of Hamburg has concluded the trial phase of a massive subterranean aquifer heat storage system, which is supposed to replace a coal plant and which can provide heat to 8,000 households in winter, Julia Witte writes in Die Welt. “Hamburg’s largest thermos flask”, as the aquifer is dubbed jokingly, can absorb about 160 million kilowatt hours of heat in water that has been heated to 80 degrees Celsius and then pumped back into the ground to preserve the temperature, she writes. With investment costs of about six million euros, “a subterranean storage is much cheaper than insulated tanks above the ground”. Storing heat is one of the Energiewende’s greatest challenges, Witte explains, adding that the moderate heat loss of about twelve percent on average provides grounds for optimism that aquifers can indeed offer a solution.

Find more information in the CLEW dossier Cities, municipalities and the Energiewende.

Germany and Europe have to ramp up investment in battery cell production in order to prepare their automotive industries for a looming rapid expansion of electric vehicles, Germany’s state secretary in the Federal Ministry for Economic Affairs & Energy (BMWi), Matthias Machnig, says in a press release. On the occasion of the EU’s high level meeting on battery development and production in Europe, held in Brussels on 11 October,  Machnig urged Germany’s European partners to seek “sovereignty in key technologies”. “If Germany wants to remain a premium carmaker, we need our own battery cell production”, he insisted.