For Germany to meet the Paris Climate Agreement targets, a phase out of coal-fired power generation must be complete by 2035 and the oldest facilities shut down as soon as 2019, according to a study by the Institute for Applied Ecology (Öko-Institut) and Prognos, commissioned by WWF. “Germany has a coal problem that must not be put off any further,” Christoph Heinrich, board member at WWF said in a press release. “The good news: By shutting down the oldest and often dirtiest power plants fast, modern facilities have more time. This way, structural breaks in the affected regions can be minimised and the costs of the Energiewende kept low,” Heinrich said. The German power sector has a remaining CO₂ budget of 4 billion tonnes, according to the study. Open pit lignite mines must be closed sooner than envisaged. To supplement the coal phase out, grid expansion and the development of renewables must be accelerated, and Germany’s large export surpluses from CO₂-intensive electricity generation reduced, according to the study. 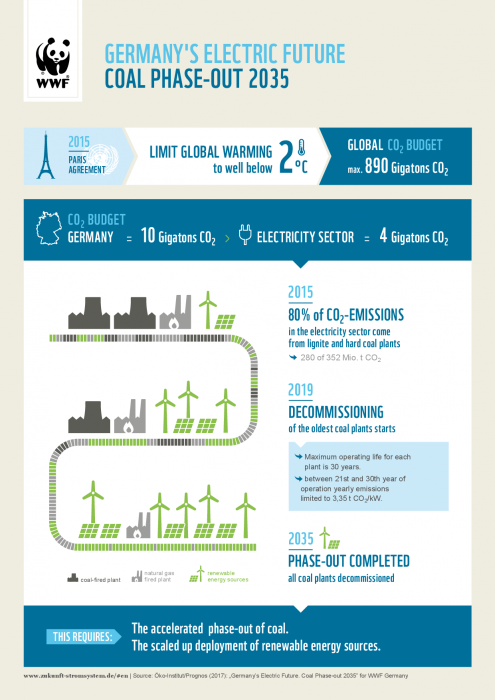 Find the press release in German here and the full study with a summary in English here.

For background read the CLEW article Environment agency shows options for halving coal emissions by 2030 and the CLEW factsheet When will Germany finally ditch coal?