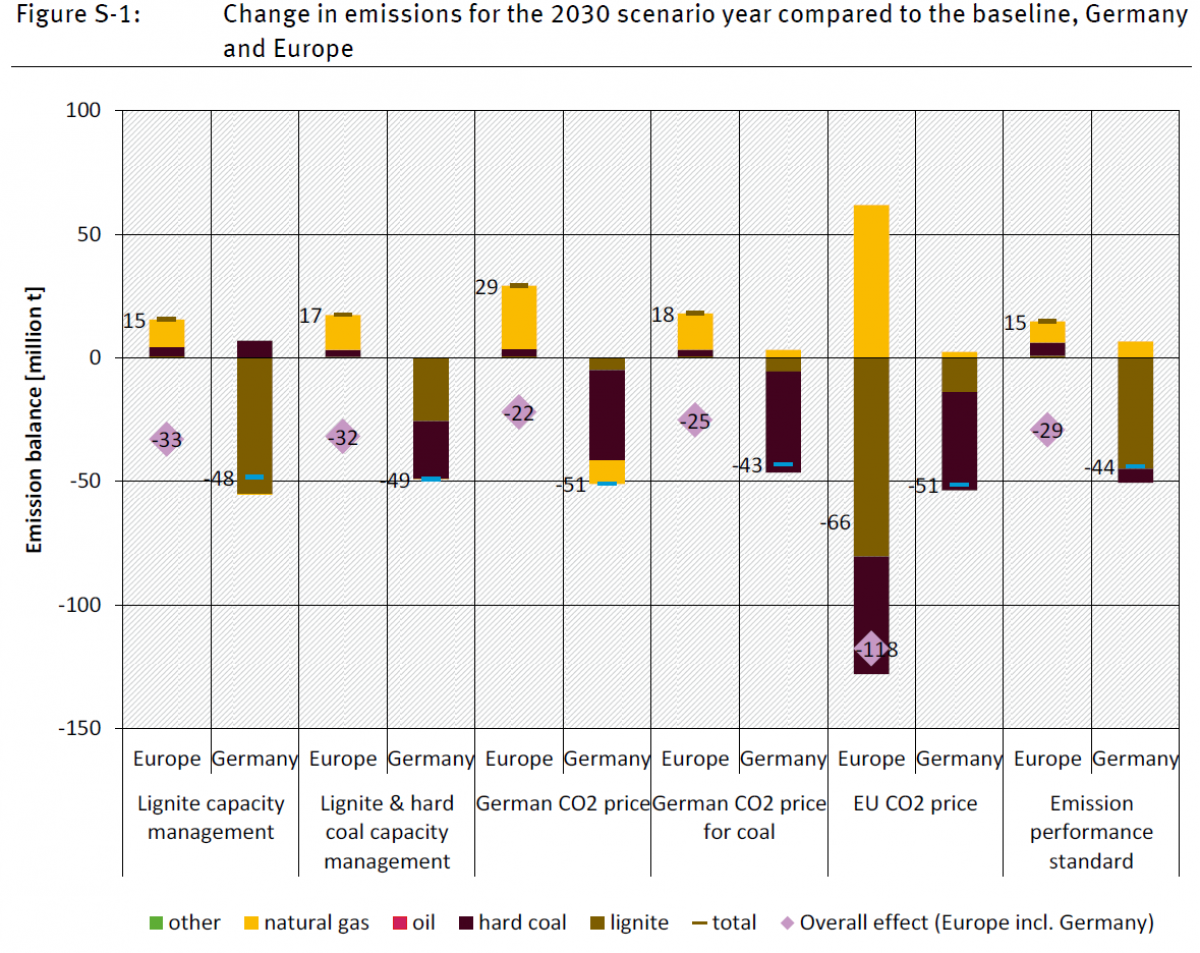 Emission reduction scenarios for Germany and Europe / Source - Öko-Institut
The best way for Germany to reach its 2030 emissions target for the power sector is by shutting down old coal plants, the Federal Environment Agency (UBA) suggests. This strategy is more attractive than an additional CO2 levy, according a study commissioned by the UBA.

Germany’s hard-won Climate Action Plan 2050, which sets out national targets for implementing the Paris Agreement, stipulates that the power sector needs to cut greenhouse gas emissions by half by 2030.

“For that to happen, coal-fired power production needs to be cut by more than half,” the UBA stated in a press release accompanying the study conducted by the Institute for Applied Ecology (Öko-Institut).

The UBA, Germany’s main environmental administration subordinated to the environment ministry, suggests “four options for lawmakers” to turn that goal into policy.

When and how Germany will ditch coal was one of the most controversial topics in the run-up to the country’s Climate Action Plan. It may also become a hot topic in this year’s general election.

Coal is by far the greatest liability in Germany’s CO2-balance - but the country’s power supply, as well as thousands of jobs, continue to rely on it. Despite a rapid growth of renewable energy capacities in recent years, Germany's CO2-emissions have remained stubbornly high. The country intends to shift to a low-carbon and nuclear-free economy by 2050, a policy dubbed Energiewende.

The Green Party on Friday proposed a plan for exiting coal within the next 20 years. But economy minister Sigmar Gabriel rejected what he called a “hunt for exit dates”.

A commission for “Growth, Structural Change and Regional Development” will be set up in 2018 to discuss the transformation required by climate protection, according to The Climate Action Plan 2050.

The UBA states that the most “robust” options both imply switching off coal plants – which it calls “capacity management”. This would either mean a gradual shutdown of all lignite and hard coal plants built before 1990, or a decommissioning of only the lignite plants, which cause most pollution. The UBA favours decommissioning “to ensure that emissions are not transferred to other EU states”.

The UBA proposes two other options: The first is an additional national levy of ten euros for every tonne of CO2 resulting from power production based on fossil fuels. The other is a limitation of coal plants’ full load hours to 4,000 hours per power station by 2030.

According to the study, switching off coal plants has a larger effect on Europe-wide emissions, requires the least structural adjustments, and offers key advantages for utilities, who can continue to operate modern plants.

“From an overall perspective, therefore, capacity management of hard coal and lignite-fired power plants is likely to prove the most attractive of the instruments analysed for the next step in emission reductions, i.e. those which need to be made by 2030,” the study concludes. 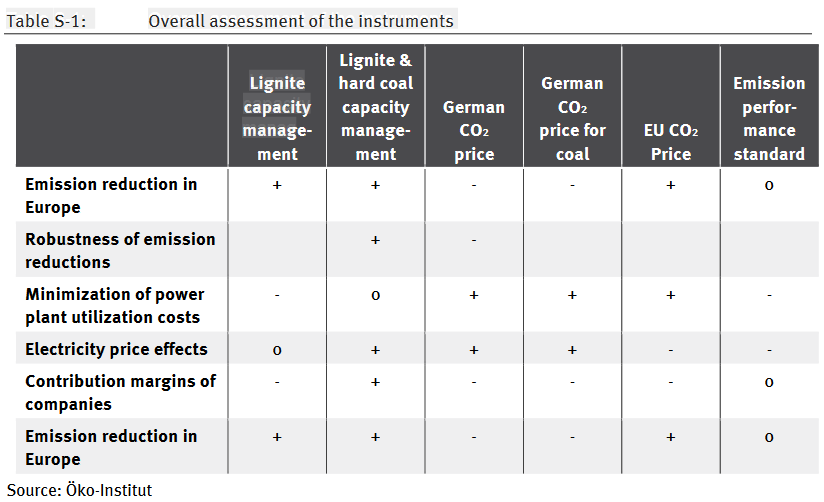 UBA-director Maria Krautzberger said neither of the proposed options will have a major effect on power prices. “Wholesale prices will rise by a maximum of 0.2 (euro) cents per kilowatt hour (kWh).”

“All propositions can be implemented nationally but have to be accompanied by a tightening of the EU’s emissions trading system (ETS) volume,” she said.

In addition to reducing emissions domestically, the UBA’s options would also cut Germany’s power export surplus. CO2 emissions in the entire EU could also be brought down because more environmentally-friendly natural gas-fired power plants were likely to fill the resulting supply gap, according to the UBA.

In order to prevent an oversupply of then-unused German CO2-certificates in the ETS, the agency suggested that member states should be allowed to cut and erase a corresponding amount of certificates. “The German coal exit would be made compatible with Europe this way,” it added.

The UBA stressed that all four options could be put into practice without running the risk of compensation claims by plant operators. Doubts about the constitutionality of Germany’s nuclear exit recently led to a judgement by the country’s highest court, saying that while the move largely was legal, power companies still were eligible for some compensation payments by the state.