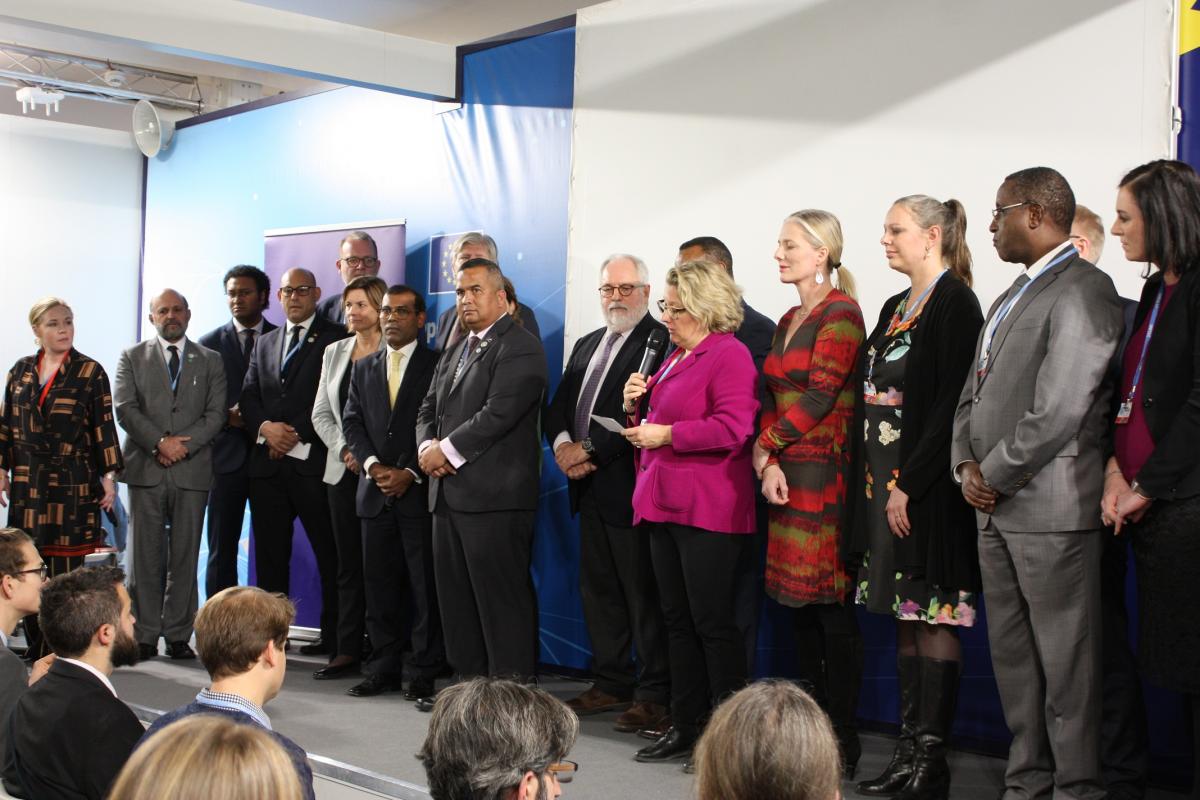 Germany is under scrutiny at the UN climate summit COP24 in Poland: the country will fail to meet its 2020 climate target and only the next year will show if a push to phase-out coal-fired power production will result in an end date for the CO2 intensive fuel. But at the same time, the German negotiating team from the environment ministry is known to be a constructive and ambitious force in the climate talks which this year are to produce a set of rules on how to implement the Paris Agreement. CLEW tracks the latest views and comments from German officials, NGOs and other relevant news bits at the conference in Katowice in a daily blog.

Today: Negotiations “will not fail” / It's about Article 6 again... / Germany aims to build new alliances around climate and security / High Ambition Coalition urges negotiators to fight for spirit of Paris 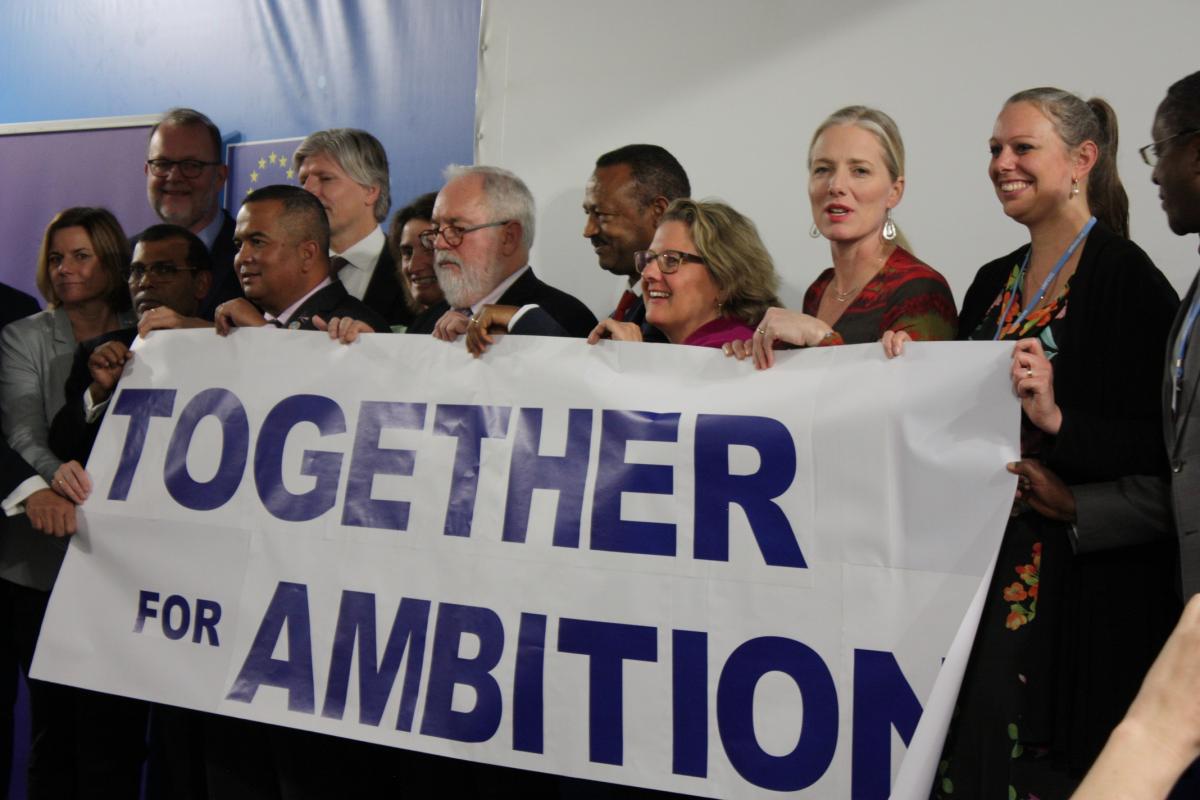 The High Ambition Coalition is a group of country ministers from of some of the richest and poorest and most vulnerable nations of the world. Photo: CLEW/Wettengel 2018.

As the scheduled final day of COP24 is drawing to an end, the High Ambition Coalition, a group of country ministers from of some of the richest and poorest and most vulnerable nations of the world, have urged parties to fight for the spirit of the Paris Agreement and in particular for including the findings of the IPCC’s special report on limiting global warming to 1.5°C in the decision, to increase climate action efforts and create a rulebook that would implement all aspects of the Paris Agreement. Germany’s environment minister Svenja Schulze, who was one of over 20 country representatives who joined into the announcement, said: “We want the world to know that we will not stop working on more and greater ambition.”

The minister said the current draft text was a good basis for further negotiations. "But we made very clear here that we want more. 'High ambition' is our aspiration for the outcome here at the COP. We don't want just any outcome, we want a good one," said Schulze.

Without a strong rulebook, the Paris Agreement would become redundant, Mohamed Nasheed of the Maldives warned. “You cannot cut a deal with science, you cannot negotiate with the laws of physics,” he said. "We have to clearly back the IPCC report and implement the Paris Agreement. Otherwise we will die, and I’m sure that would not be an appropriate outcome.”

Germany aims to build new alliances around climate and security

The German government intends to use its two-year term as a non-permanent member in the United Nations Security Council in 2019/2020 to put the implications of climate change for international security into focus.

“The question is not whether we discuss it anymore, but how,” said Michaela Spaeth, Deputy Director-General for Energy and Climate Policy at Germany’s Federal Foreign Office during a panel discussion in the German pavilion. Climate had to become a “normal political issue in the thinking of the Council”.

The United Nations Security Council traditionally deals with existing conflicts, but maintaining peace in the world includes the duty of foresight, said Spaeth. “The Council has to act not only once the house is on fire,” but prevent this fire from ever breaking out, she said. That is why Germany has been calling to include climate in the Security Council work for some time.

Women ‘s power at the German Pavilion @COP24 : Lively debate on building new alliances on climate and security, together with #Nauru, #Sweden and @E3G.#COP24 #Katowice pic.twitter.com/YFKv5nPgAI

A small island state – in fact the smallest state in the South Pacific – which does believe climate needs to be high on the Security Council’s agenda is the Republic of Nauru. The security issue of climate change to its people is the “total inundation of an island, the total relocation of populations to another sovereign land,” Marlene Moses, Permanent Representative of the Republic of Nauru to the United Nations, told Clean Energy Wire.

Nauru counts on the support of Germany and its political clout. “It takes a country like Germany that can do the heavy lifting, because this issue is extremely political,”

Support also comes from Sweden, which has pushed climate during its term in the Council over the past two years. “We’ve worked very closely with Germany and we’re very pleased with them taking over the torch and continuing this work,” said Inger Buxton: Deputy Head of the Department of Global Agenda at the Swedish foreign affairs ministry. Her advice to the German government: keep focussed, but also think outside the box, and sometimes work under the radar so as to not stir up too much dust.

COP24 negotiations “will not fail” – source

The climate summit in Katowice is moving into its final phase, but there is still a clear need to negotiate throughout what will be another long night, said German environment minister Svenja Schulze on what was scheduled to be the last day at COP24.

“We’re moving straight to the goal, but there is still dissatisfaction,” said Schulze. She expects a final plenary to take place on Saturday.

Sources from the German delegation displayed optimism. “The talks will not fail,” said one delegation source. The Polish COP Presidency had put together a text document on the basis of which negotiations could be brought to a good outcome. “The different issues appear in a balance that might have to be readjusted here and there, but we don’t see anything where we have to fundamentally change direction,” the source said.

One of the most important issues for European negotiators at this stage are the transparency rules. The EU says that these have to be the same for all states – after a transition period. We accept that developing countries still need to create techniques to bring their reporting to the standards of the emission registries we have introduced over the years, said the source. In the end, however, it had to be a single, transparent regime, otherwise it was impossible to build trust globally.

The debate on how to include and recognise the IPCC special report on the impacts of global warming of 1.5 °C above pre-industrial levels had been blown up quite a bit, said the source, and added that all the excitement may not be helpful. The German delegation was trying to build bridges in this regard and not make it an all or nothing issue.

The topic loss and damage has been moved to a footnote in the current draft test. “I dare predict that it won't stay that way,” said the source. Germany was one of the countries that have always understood this issue had to be addressed sensitively. 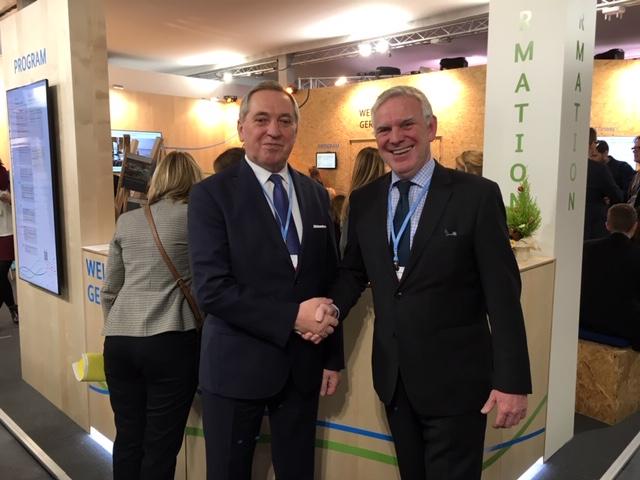 Germany adamant to save markets article

The status of negotiations on the Paris Agreements markets article (Art. 6 Paris Agreement) is having NGOs up in arms. Climate Action Network writes that the new text “fails at the most basic task of avoiding double counting”.

The German delegation seemed equally alarmed. “The markets chapter is one of the central aspects of these negotiations,” environment state secretary Jochen Flasbarth told Clean Energy Wire CLEW. “If we get the wrong wording on markets, in a world that is potentially steering towards integrated emissions trading systems, we would create loop-holes that can lead to a proper weakening of climate action rules.” Germany was therefore putting all its knowledge and experience, including lessons learned from the flaws of the European Emission Trading System (EU ETS) into the negotiations, Flasbarth said.