Chancellor Angela Merkel’s conservative CDU/CSU alliance and its Social Democrat (SPD) partners have agreed to keep their promise to speed up the expansion of renewable power installations, ending months of wrangling, reports Thorsten Severin for Reuters. The German government agreed in January to plan for additional tenders for 4 gigawatts (GW) of photovoltaics and 4 GW of onshore wind, on top of regular tenders. According to media reports, the government plans 1 GW each for wind and solar in 2019, followed by 1.4 GW each in 2020 and 1.6 GW each in 2021. The coalition partners also plan to set up a working group to debate measures to increase public acceptance of onshore wind projects, say the reports.
Engineering association VDMA Power Systems and utility association BDEW both said they welcomed the end of the standstill in energy policy because companies needed a clear perspective for the coming years. But the German Offshore Wind Energy Foundation lamented the lack of provisions for wind power generation at sea. It said Germany could not reach its target of increasing the share of renewables in power consumption to 65 percent by 2030 without additional offshore projects. Environmental NGO WWF Germany also said current plans for the roll-out of renewables fell far short of what would be necessary to implement the energy transition and do justice to the Paris Climate Agreement.

German consumer groups have filed the country’s first class action lawsuit against VW over the emissions cheating scandal, reports newswire AFP in an article carried by the Business Times. "Volkswagen will remember this day as the moment the kid gloves of the politicians were replaced by the boxing gloves of consumer advocates," Klaus Mueller of German consumer federation VZBV told DPA news agency. The legal action has been made possible by new legislation taking effect on November 1 that was hurried through to beat a year-end statute of limitations for claims against VW.

Volkswagen and Ford are discussing a wide-ranging partnership that stands to change the German industry, report Martin Murphy and Stefan Menzel in Handelsblatt Global. The world’s biggest and fifth-biggest automakers want to join forces to move into electric vehicles and autonomous driving, Handelsblatt learned. The carmakers are aiming to pool their resources for the massive investments needed in this new era of the automobile.

Read the report in English here.

Find background in the dossier BMW, Daimler, and VW vow to fight in green transport revolution.

The long-time rival of German Chancellor Angela Merkel and former parliamentary group leader of the conservative CDU/CSU alliance, Friedrich Merz,  provided the first details on his candidacy to become chairman of the Christian Democratic Union (CDU) in December. “Migration, globalisation, climate change, digitalisation - these are the greatest challenges of our time in my view,” Merz said at a press conference in Berlin. At a time of “radical upheavals”, voters and CDU members expect a “clear course”, he added. “To this end, I want to initiate a […] renewal in our party and lead it with a steady hand.” Merz said he wanted to drive forward “the opening and modernisation” of the party, which, he stressed, needed more women and young people as members. Merz said he and the other candidates would have a “lively, but fair and decent dispute” in the run-up to the party conference on 7-8 December. The party has not yet agreed on how to find and elect the next party chair, but one possibility could be that the candidates present themselves to party members at regional conferences, said Merz.

For background, read the article Climate and energy views of candidates to follow Merkel at helm of CDU. 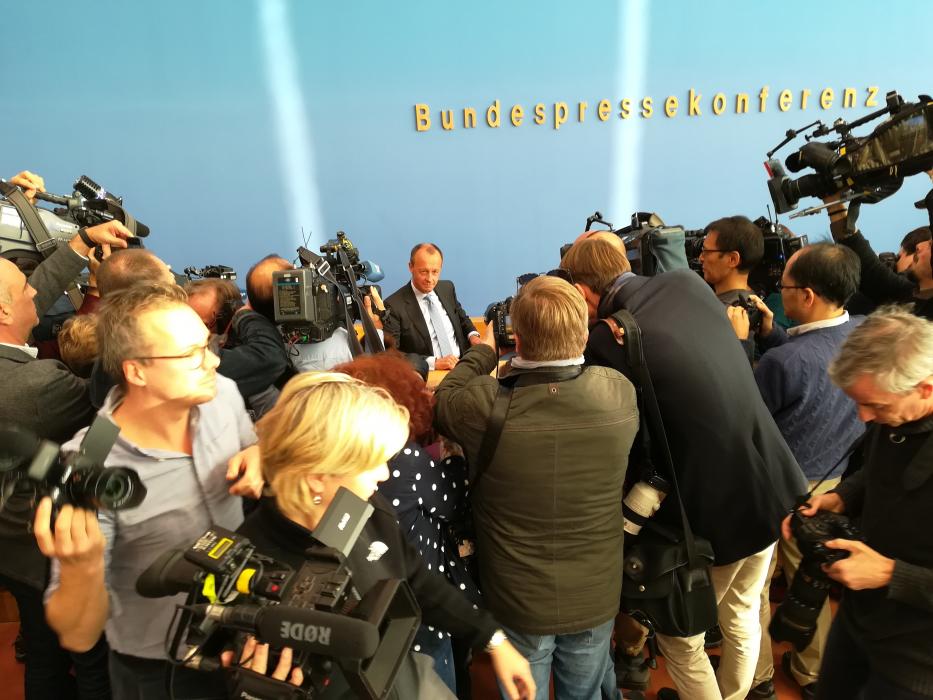 Germany's coal exit commission has published its interim report on how to cushion the effects of ending coal-fired power generation in the three remaining mining regions. The report contains, among other things, proposals for better transport and internet infrastructure as well as for the establishment of federal agencies in affected regions in order to create jobs.