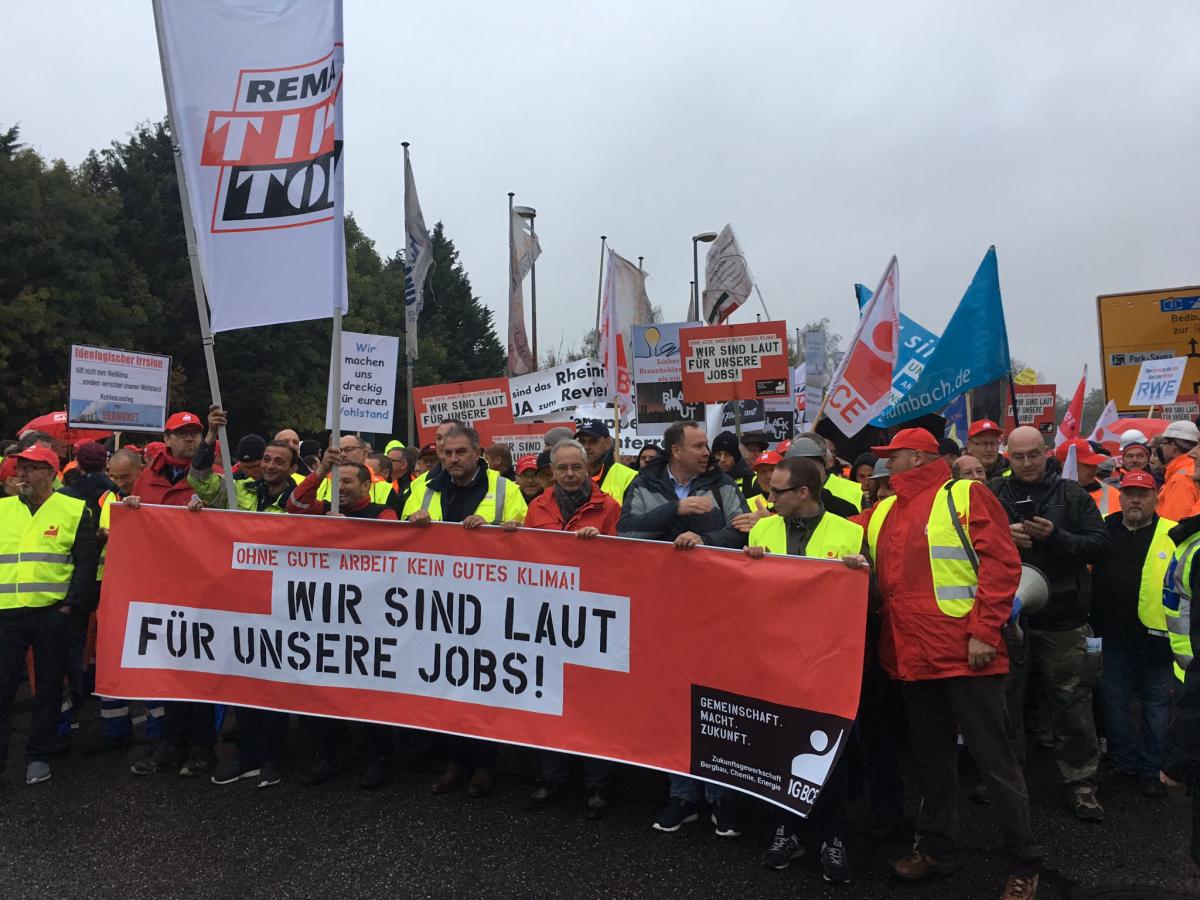 Members of Germany's coal exit commission have unanimously adopted the first major policy recommendations for the country's lignite mining regions affected by a future coal power phase-out. At an on-site meeting in the Rhenish lignite mining region earlier this week, the taskforce prepared an interim report on how to cushion the effects of ending coal-fired power generation in the three remaining mining regions. While energy companies warned that an accelerated coal exit could endanger supply security, workers unions ver.di and IG BCE organised a protest for industry jobs and “an energy transition with reason” on the sidelines of the talks. [Update: Adds news on unanimous decision]

Germany's coal exit commission on Thursday unanimously adopted the first structural policy recommendations for those lignite mining regions affected by a future coal power phase-out. With the first part of their report completed, the Commission had "created a good basis for successfully conducting the forthcoming discussions on climate and energy policy", the four heads of the taskforce said in a press release. This will include finding a phase-out path for coal-fired power generation by December.

The report has not yet been published. The text is now being edited and a final version will be made available next week, a spokesperson from the economy ministry told Clean Energy Wire. It was unclear whether the commission made changes to the draft that was leaked earlier in the week.

According to German media, the finalised report contains, among other things, proposals for better transport and internet infrastructure as well as for the establishment of federal agencies in affected regions in order to create jobs. The task force will meet again on 15-16 November to “intensively discuss climate and energy policy”, says the press release.

Germany has embarked on the difficult endeavour to wean its economy off fossil fuels without relying on nuclear energy. The country of the Energiewende has been struggling to push greenhouse gas emissions down over the past years, so Angela Merkel’s federal government coalition set up an independent multi-stakeholder task force to organise Germany’s coal exit. Devising economic and employment prospects for lignite mining regions is a central task of the government’s “Special Commission on Growth, Structural Economic Change and Employment.” The task force will present its final report in December, including an end date for coal-fired power generation.

Earlier this week, thousands of workers from the coal sector and energy-intensive industries demonstrated to save their jobs and against what they fear could become an overly hasty German coal exit. The protest march in the Rhenish lignite mining district, not far from the symbolic Hambach Forest, was organised by unions ver.di and IG BCE to send a message to coal exit commission members, who met there to discuss measures to support regions affected by an end to coal-fired power generation.

"We will not allow ourselves to be made the victim of those who make big promises in climate policy, but let others pay the bill,” mining union IG BCE head Michael Vassiliadis told protesters. One protester told Deutsche Welle: "The most important thing is that we can keep our jobs — this is what we are worried about. Where our energy actually comes from is less important.”

A draft of the coal commission’s interim report, seen by the Clean Energy Wire, builds on proposals for affected regions leaked two weeks ago. “The success of the energy system transformation in the context of global challenges will depend on the question […] of whether developments such as the accelerated phase-out of coal-fired power generation can be implemented fairly and without uncontrollable structural breaks,” says the draft’s preamble. It also states that the goal is to create at least as many “future-proof” new jobs as are affected by job losses in the coal industry. This did not just include jobs in the energy industry itself, but also industries with especially high energy needs.

In a statement released after the visit to the Rhenish lignite mining district, the four heads of the coal exit commission said that the region is “the backbone for the highly developed industrial location of the Rhineland and ensures the electricity and heat supply for the energy-intensive industry, which is particularly dependent on […] a very high level of supply security.” At the same time, the task force pointed out that it saw many examples of how companies in the region already use innovative developments to adapt to the energy transition and the requirements of climate protection.

According to German business daily Handelsblatt, energy companies Uniper and Steag had prepared reports for the commission meeting, warning that an accelerated shut-down of coal power plants could endanger supply security, also because Germany aims to close the last nuclear power station by the end of 2022. Uniper proposes to put coal power stations into a reserve for emergency situations, as was done in the last legislative period with several lignite plants.

The 39-page draft of the report on structural development agreed on Thursday, lists criteria for a successful structural economic transition, explains the situation in the individual German mining regions, and makes proposals for concrete measures.

"The aim must be to create adequate substitutes for the declining or disappearing value added from coal,” states the draft. The report highlights that eastern German regions, such as Lusatia, have been hit especially hard as large parts of the industry had collapsed after reunification Any measures, therefore, had to “especially take into account the experiences of people in eastern German states”.

Last week, the heads of the three lignite-producing eastern German states had warned that the approaching drastic change in industry and jobs would have to be handled with great care, otherwise the result could be political instability. Brandenburg state premier Dietmar Woidke (SPD) said that “people in the coal regions mustn’t get the impression that those in power take away their jobs and future”. The state premiers demanded a federal law that ensured reliable and long-term financial support to the affected regions. In East Germany where state elections loom in 2019, the right-wing Alternative for Germany (AfD) has been rising strongly in the polls, benefitting from wide-spread dissatisfaction with federal policies such as immigration and fears about future job prospects.

The commission report lays out “future visions” for the coal regions in some detail. The aim is to make the mining districts “innovation regions”. Lusatia, for instance, needed to urgently improve its digital and transport infrastructures, connecting it to surrounding metropolitan areas. The region needs better conditions allowing the creation of technology start-ups to spur innovation. Research institutes could increasingly be placed here.

Infrastructure from shut-down lignite plants could be used for newly constructed gas power plants, and there is “significant potential” to further expand onshore wind and solar power in the region. The report also proposes to set up power-to-x projects, for example to produce hydrogen for industry, or adding it to the natural gas grid. For the Rhenish mining region, the coal commission proposes to establish a “campus for low-carbon technologies for energy-intensive industries”.

Commenting on the report’s proposals, Greenpeace spokesperson Tobias Münchmeyer said that while structural support was important, individual measures could only be decided together with an accelerated coal exit. “Here, the principle must apply: The faster the regions get out of coal, the more structural aid is justified by society as a whole."