Climate & CO2 Efficiency
Days before the UN climate conference in Paris, Germany is taking stock of its national climate protection efforts. The government says the country is making “good progress” with its energy transition, but independent experts warn that current policies are probably not enough to achieve planned CO2 cuts, putting climate goals in “serious danger”.

Renewables have become Germany’s most important power source while the country is getting by with less energy, but energy efficiency and the greening of transport are making little headway – these are the mixed results of the fourth energy transition monitoring report by the Ministry for Economic Affairs and Energy. The ministry noted that its report, published on Wednesday, also finds that household power prices decreased for the first time in a decade at the beginning of 2015 and remained constant for industry.

Another key finding, according to the ministry, is that fossil fuel imports fell to 81 billion euros in 2014, down from 95 billion euros in 2013. Despite economic growth, Germany emitted less CO2, the report states. Renewable energies saved 151 million tonnes of CO2 emissions in 2014.

“We are making good progress with the energy transition,” said Sigmar Gabriel, Minister for Economic Affairs and Energy.

But an accompanying expert assessment of the report said Germany was “seriously in danger” of not achieving its 2020 emission reduction targets. The independent experts found considerable "discrepancies" between achievements to date and ideal pathways towards the 2020 goals for CO2 emissions, primary energy consumption, power consumption and final energy consumption in transport and heating. They also warned the government should prepare itself in case efficiency falls short of targets.

With its energy transition (Energiewende), Germany is shifting to a power system based on renewable energies while phasing out nuclear power at the same time. The targets are to reduce greenhouse gas emissions 40 percent by 2020 compared to 1990 levels, and see them drop by 80-95 percent by 2050. The plan is to achieve this by increasing the share of renewables in electricity consumption to 35 percent by 2020, and increase efficiency to reduce overall energy consumption.

Not only the independent experts, but also the opposition criticised the government's track record. Annalena Baerbock, the Green Party's climate spokeswoman, said: “A few days before the climate summit, the expert commission highlights how inadequate the government’s actions are.” She said the data was further proof that Germany needed a carefully planned coal exit, with binding CO2 emission limits.

The expert commission and the government agreed that Germany is lagging behind its targets in many areas. Only for renewables development does the government assign itself five out of five points for its achievements. With an estimated 33 percent share of renewables in power consumption in 2015, the target of 35 percent by 2020 is easily within reach. Renewables covered 13.5 percent of gross final energy consumption in 2014, which makes the government confident that it will overachieve the target of 18 percent in 2020.

The expert commission states that Germany will have to triple yearly CO2 emission cuts until 2020. The reduction must amount to 28 million tonnes per year, up from an average of around 9 million tonnes achieved so far. While the government said emissions dropped 4.3 percent last year, the experts stressed the figure was only 1.7 percent when adjusted for mild temperatures.

The government passed a “Climate Action Programme” in December 2014, because it realised it would fall significantly short of 2020 climate goals. One of the results of this initiative is the recently agreed brown coal reserve to phase out 2.7 gigawatts of lignite plant capacity, as well as reforms on combined heat and power plant legislation.

Environment Minister Barbara Hendricks said a first assessment report on the 2014 programme, also passed on Wednesday, backed her conviction that Germany will achieve its 2020 climate targets. She said this was an important message for Paris.

But the expert commission warned it didn't believe Germany would cut enough emissions with these initiatives.

The Energiewende report also states that energy consumption in the transport sector increased last year, contrary to plans. Total mileage driven in both individual and goods traffic has risen to the highest levels in German history and was not compensated by efficiency gains. The government assigned itself a single point out of five for its achievements in the transport sector. Energy consumption in transport is meant to fall 10 percent by 2020, meaning it would have to decrease 2 percent every year. Instead, it has risen 0.2 percent annually since 2005. The expert commission bemoaned the fact the government was not taking transport targets seriously enough. “There is urgent need for action, particularly in the light of recent irregularities in the CO2 emissions reporting for vehicles,” the authors write. 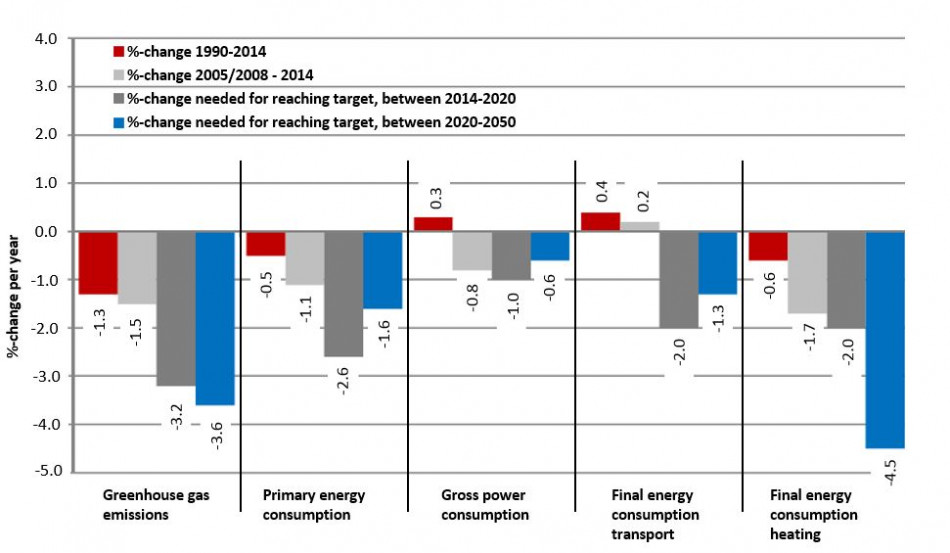 The cabinet also approved a report on the use of renewable energies in the heating sector, as well as a strategy to make the total of Germany’s buildings almost climate-neutral by 2050, by improving energy efficiency. Around 35 percent of Germany’s final energy consumption is used in buildings, which produce a third of the country’s greenhouse gas emissions and are therefore key to Energiewende’s success, explains the ministry for economics and energy.

The German Association of Energy and Water Industries (BDEW) said the strategy for building efficiency was an “important signal” that the government is also addressing sectors not covered by the European Emissions Trading System (ETS). “This is an important step for effective climate protection,” said BDEW head Hildegard Müller in a statement. But she noted that some key questions were not addressed – most importantly, the issue of financing. She also asked the government to create powerful incentives for investments.

Environment and consumer protection association DUH said the strategy was a “fatal signal” ahead of the Paris climate summit, because it was totally insufficient and endangered climate targets. Even though the economics ministry has realised current policies do not suffice to achieve efficiency targets, it fails to address this problem in earnest, according to DUH.

Energy minister Sigmar Gabriel saidd in a statement: “We will probably outperform our target for the use of renewable heat in 2020.” The share of renewables in heating was around 12 percent in 2014 and is likely to increase to more than 16 percent in 2020, compared to a target of 14 percent enshrined in the 2009 renewable heating law, according to the report assessing progress in this area.