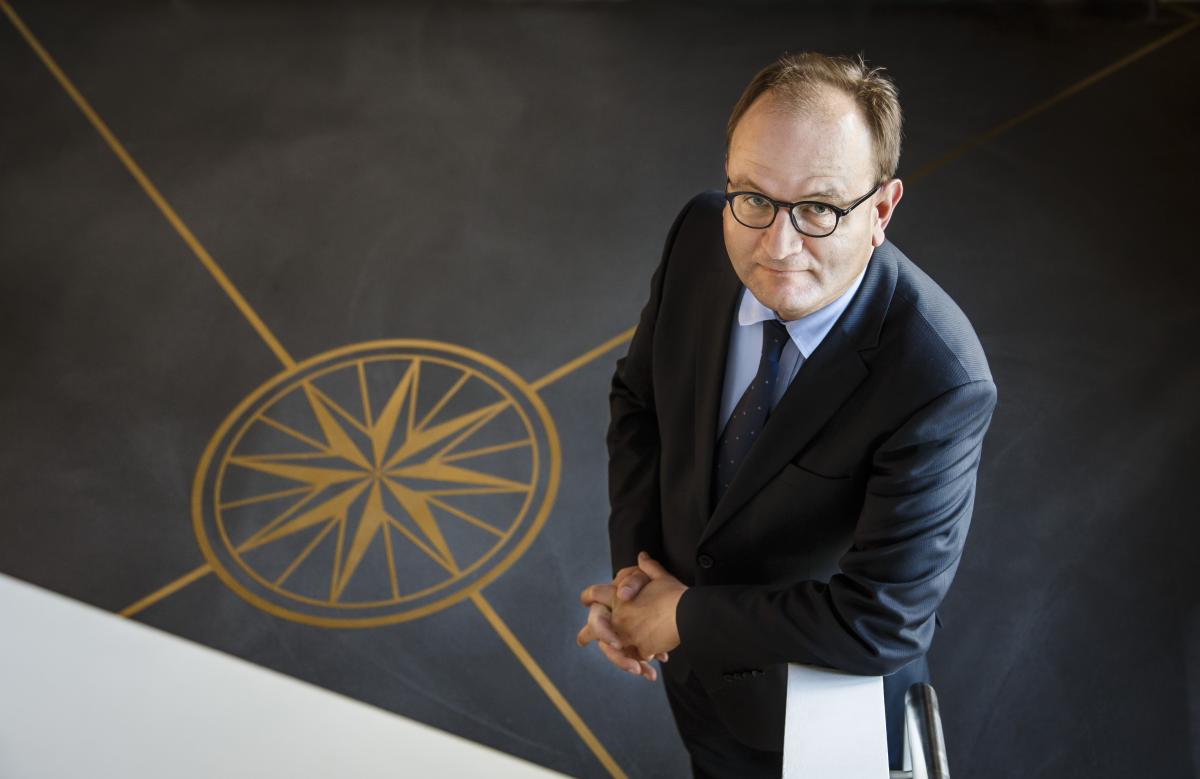 Ottmar Edenhofer. Photo: MCC.
The final negotiations for a global climate treaty in Paris are just days away. What is the German perspective on an international climate agreement and what has the energy transition (Energiewende) got to do with it? The Clean Energy Wire talks to German businesses, researchers, negotiators, politicians and activists who have stakes in the talks. Today: Ottmar Edenhofer, director of the Mercator Research Institute on Global Commons and Climate Change, chief economist at the Potsdam Institute for Climate Impact Research, and former co-chair of Working Group III of the Intergovernmental Panel on Climate Change (IPCC).

Ottmar Edenhofer: I am admittedly rather pessimistic about the outcome because what we have seen so far are Intended Nationally Determined Contributions (INDCs) that probably do not allow us an entry point into an effective climate policy. The current INDCs are just slightly more ambitious than what we have seen with the Cancun Agreements. Emissions will increase until 2030. This is very worrying.
The real challenge is that we are in the middle of a large coal renaissance. Countries plan to install 1,000 gigawatts of coal-fired plants around the globe. And even if we implement and install one third of this, it would lead to around 113 gigatons of CO2. Together with existing capacities – with which we have committed to emit 730 gigatons of CO2 – we will then almost exhaust the 1,000 gigatons consistent with a 2-degree target.
What could be an effective short-term entry point for climate policy would be negotiations for a carbon price, with climate finance transfers conditional on the cooperation of countries over a carbon price. If Paris could sort out the climate finance issue and also define the starting point for a process to negotiate on carbon pricing – even if the negotiations themselves are not within the UNFCCC – I would be happy. But this is unlikely.

My biggest concern is that the INDCs are basically pledges, and these pledges are neither comparable nor can they be monitored, so far. This is the most important challenge for the Paris meeting. Nonetheless, to achieve something meaningful, we can’t just rely on INDCs.
That is why carbon pricing is so important. Without it, we cannot stop the renaissance of coal. Investments over the next ten years will determine the future emissions trajectory and it will become very hard to depart from this trajectory. It’s not mainly a climate system issue – it’s all about the investment cycle and these investments are already under way. We have to impose a carbon price because otherwise there is no incentive for investors to change their investment decisions.

Germany is quite committed to contributing to climate finance and I hope that Germany can promote something on carbon pricing. Probably this cannot be negotiated within the UNFCCC but next year China has the leadership of the G20, and after that Germany. Germany could use that opportunity to launch a debate. At the Paris negotiations, Germany could at least make sure that climate finance can be used, or is designed, in a way that makes transfers dependent on international cooperation. It’s probably not realistic to expect negotiations on carbon pricing from the UNFCCC, but Germany could make sure the Paris talks lead to negotiation on this issue at the G20.

Other countries can learn how important a carbon price is. Germany’s model of the energy transition was to subsidise renewables and reduce demand for electricity. This has led to a situation where coal-fired plants have become incredibly competitive. The German example shows that we had very good intentions and we have invested a lot in increasing the share of renewables, but meanwhile we are in a situation where coal is much more competitive than gas. This is something we predicted as economists a long time ago and we always raised the importance of carbon pricing. The EU emissions trading system is not functioning well, so now we have real problems. Carbon pricing is not the whole game, many other things have to be done, but without it climate policy cannot be effective.

Do the Paris negotiations have the potential to be a historic turning point in the fight against global warming?

I hope Paris will be remembered as a starting point for effective climate policy and not a repeat of what we have seen over the last twenty years, where we have had negotiations and conferences and in the end emissions have increased. Despite the financial crisis, and despite the Kyoto Protocol, we have had record emissions growth over the last decade. The coal renaissance hasn’t stopped in China, it has continued in India and we have by no means seen the emissions peak in China. Despite the undisputed progress of renewables, the emissions they have saved have been more than cancelled out by the growth of coal.
I hope this conference is a starting point for a new framework, with carbon pricing to incentivise carbon-free technologies and penalise the use of carbon. We should also use the revenue from carbon pricing on investments like clean water and electricity that support the poor. In this way, we can design carbon pricing which is consistent with the reduction of inequality.
I think we need a new discourse along these lines. This is enormously important. Right now we are stuck, and I hope Paris can at least be the starting point for a reasonable debate. I’m not talking about making things a bit more efficient here and there – I mean real effectiveness.