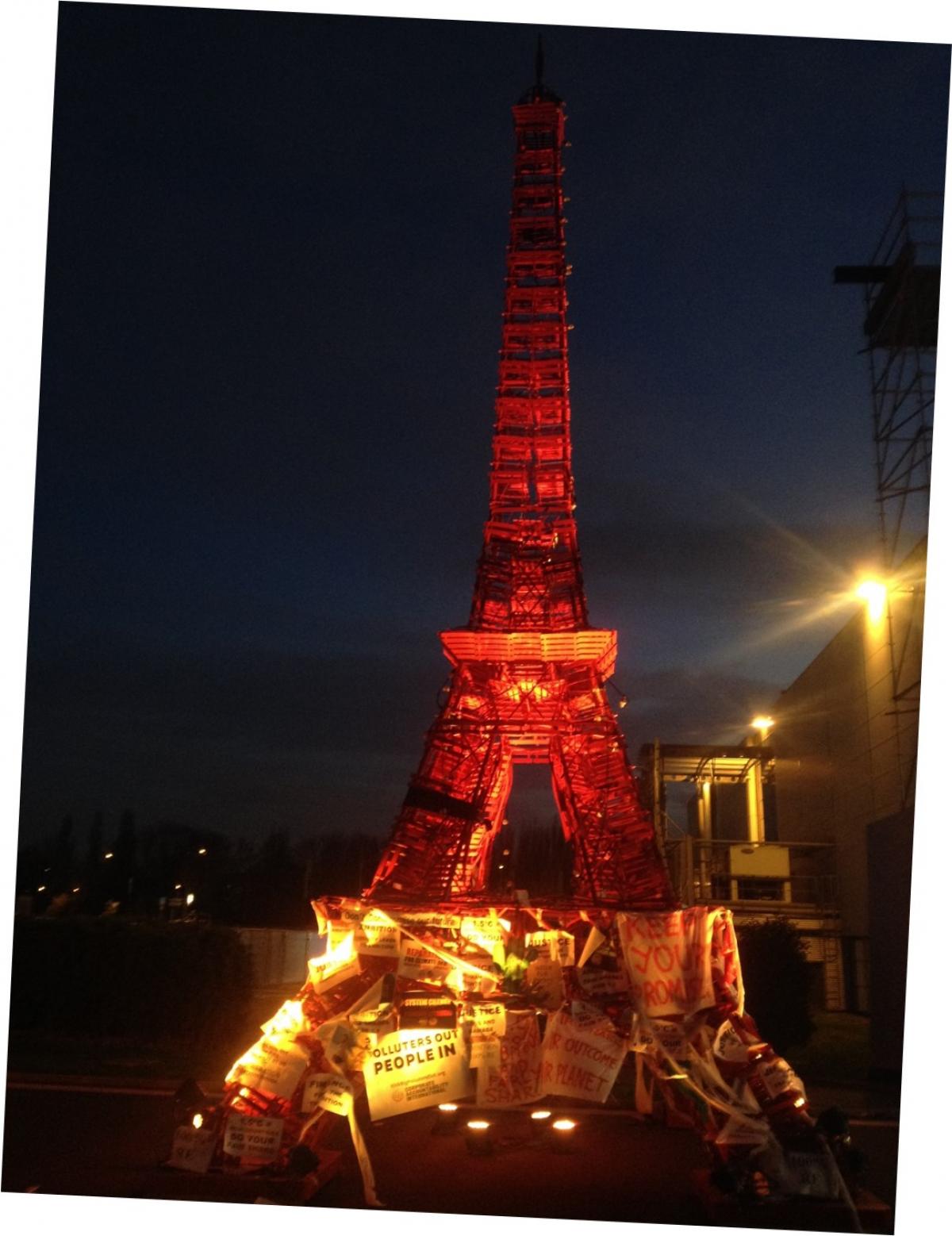 A final night session in Paris? Negotiations on the latest draft will continue through the night, COP21 president Fabius said. Photo: CLEW.
[Updates new draft release] Shorter draft with less brackets and clarity on long-term target / EU fights for differentiation and sees red lines on ratcheting up ambition crossed / Saudi Arabia as the symbol for "self-destruction" of the world

Only compromise allowed in coming talks (22:30)

The French presidency presented a new draft agreement at the Paris climate summit with clearer options on the contested topics of differentiation, finance and ambition, and ramped up the pressure on the parties to resolve those issues overnight.

“It is time to come to an agreement,” said French foreign minister Laurent Fabius. The world was expecting a deal and the summit was now extremely close to the finishing line. “We must do this and we can do this,” Fabius said. “On the basis of the progress made on all of the text, I think I will be able to present my proposal for a final text tomorrow.”

Brackets indicating possible wording that hadn’t been agreed on yet, have been reduced to some 50 from over 360 in the overall document.

The new text lost all its extra options in Article two about the long-term goal, now stating that the purpose of the agreement is to “hold the increase in the global average temperature to well below 2 °C above pre-industrial levels and to pursue efforts to limit the temperature increase to 1.5 °C, recognizing that this would significantly reduce risks and impacts of climate change”. To achieve the long-term goal "parties aim to reach the peaking of greenhouse gas emissions as soon as possible," the text says. For this, "greenhouse gas emissions neutrality in the second half of the century" is the aim. Any quantative emissions reduction targets or the expression "decarbonisation" were dropped in the new draft.

However, articles on loss and damage (Article 5) and the transparency framework (Article 9) still contained several options. Article 6 on finance is still full of brackets.

The first year of taking stock of the implementation of the agreement (“global stocktake”) will be in 2023 and then every five years thereafter, Article 10 states. The mention of parties recognising greenhouse gas emissions pricing as an important instrument, has been cut from the draft decision.

Germanwatch policy director Christoph Bals noted "important progress" in the text. "It's an important signal that the countries commit to greenhouse gas neutrality in the course of the century," he said. However, the ambition mechanism still had to be improved.

Delegations got time until 2330 PM to study the new text. Then Fabius would chair an “indaba” meeting that was solely focussed on searching for compromises. Groups and individual parties could not comment in general on the text anymore but had to come forward with compromise solutions. “Now we need to seek landing zones (on the issues).

The overall text had shrunk to 27 from 29 pages, the actual agreement text to 11 from 14 pages.

The European Union wants “more differentiated and fair differentiation” because the situation was neither one of “one fits all” nor of “two fits all”, the German delegation said in a statement on Thursday evening. The comment came as other parties claimed that the EU and the United States were trying to delete many references to differentiation from the text.

The opposite was true, the German delegation said, adding that the EU was “ready to take the lead to do more than others in mitigation, adaptation and support”. While they were recognising their responsibility, they could not keep global warming below 2°C or even 1.5°C without big emitters like China, India and oil producing states joining their efforts. The high ambition coalition was standing for fair differentiation. “We will always support countries who need support and who engage!,” the statement concludes.

The EU and US have demanded to see emerging nations “in a position to do so” taking action alongside developed countries, something that the G77+China, a group that includes many developing countries but also Arab States and emerging nations, have criticised, saying that it was an attempt to change the  essence of UNFCCC. In the UNFCCC countries are split into groups of developed (Annex I) and developing nations (Non-Annex I) – the G77+China insists that this separation is kept up and that Non-Annex I countries are not obliged to contribute climate finance, mitigation efforts and transparency on the same level as industrialised countries.

On Thursday, the EU also received the NGO award “Fossil of the Day” for “standing in the way of increasing ambition before 2020” and for “speaking against decarbonisation while at the same time putting up statements on aiming for below 1.5 °C rather than 2°C”.

The much-expected new draft agreement has been delayed until Thursday evening after negotiations drew on until five o’clock in the morning. While the French presidency still had a tight grip on the process, crunch issues in the text had not been resolved, delegations and observers from civil society said.

France was still managing the process very wisely, German environment minister Barbara Hendricks said on Thursday. Some states still insisted on their rigid positions, she said.  “The next 36 hours will be full of suspense,” she added.

The European Union was represented by six ministers, the commissioner and the EU council president in the two debating groups during Wednesday night. Discussion had been difficult, said EU head negotiator Elina Bardram. “The text is very complicated and doesn’t lend itself to political decisions,” she said. However, the group remained hopeful and was continuing to build alliances and bridges to further negotiations, she said.

EU council president and Luxembourg’s environment minister Carole Dieschbourg said that there were still a lot of possibilities in the text and some elements in the draft were crossing the bloc’s red lines. “We cannot establish a highly ambitious target and then don’t establish the necessary tools to actually achieve this target,” she said. The EU was working to get a 5-year robust ambition mechanism and transparent rules for reviews into the agreement, she said. Wednesday's text was overall a good basis to work from but the agreement needed to become more ambitious. In the opinion of the EU, the 5-year reporting and ambition cycle should start with a first stock-take in 2018-2019, followed by a 2019 “ambition dialogue” and then re-submission of the parties’ climate action ambitions in 2021.

Differentiation and finance were the two big issues that would make up the political “end game”, Dieschbourg said.

While the EU delegation remained cautiously optimistic that an agreement would be reached by Friday, or Saturday, NGO representatives highlight that old fault lines were resurfacing in the process. “Saudi Arabia has to be careful not to become the symbol for the self-destruction of the world," Christoph Bals, policy director at Germanwatch, said.

Malaysia and China were blocking the path to large emerging nations taking up responsibility in climate mitigation and climate finance, he said. Germany, the EU and the United States would like to see a provision that “countries in a position to do so” are participating in the fight against climate change incorporated in the new agreement.