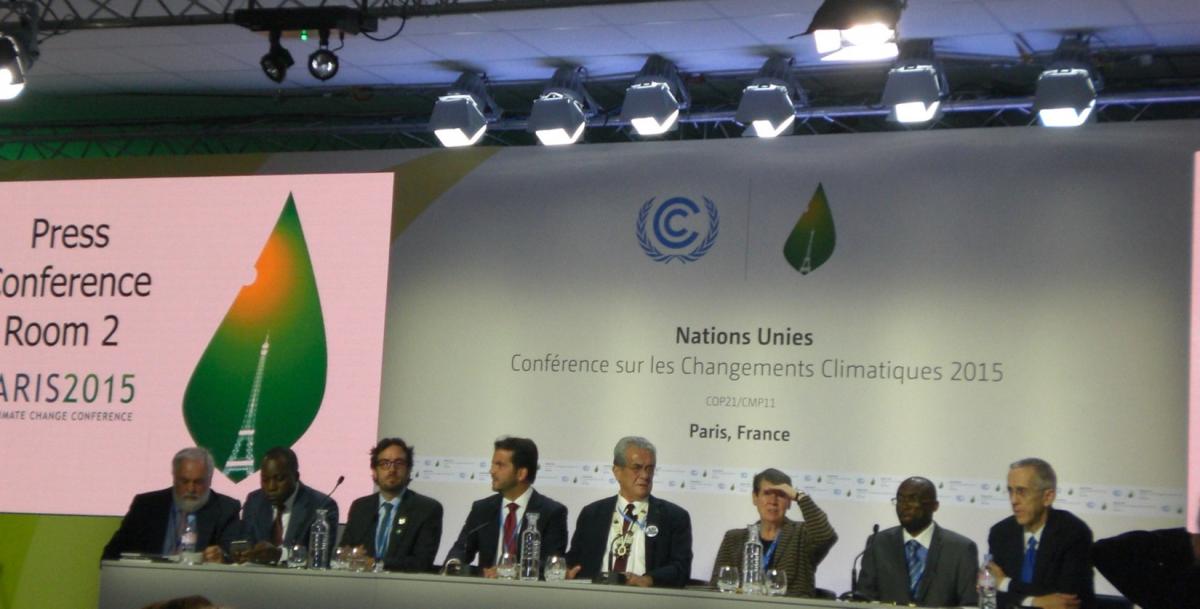 Comments by nations and negotiation groups on the draft text of the French presidency highlighted once more the remaining crunch points - differentiation, finance and level of ambition. After a three-hour long session of party statements the negotiators headed into another long night of talks at the climate summit in Paris.

The overnight talks would aim to get the “general balance of the text” focussing on the three critical areas, French foreign minister Laurent Fabius said. “Now we need to work on compromise.” During the night controversial issues would be debated which would lead to the presentation of another draft text on Thursday afternoon. This would have to be the penultimate text if the summit were to meet its Friday deadline, Fabius said.

He proposed that the so-called Comité de Paris submitted those articles without brackets or options to legal and linguistic review.

Many developing and particularly vulnerable countries such as Barbados or Angola respresenting small island states and least developed countries urged to settle for an ambitious global warming limit of 1.5°C. “We will not sign up to any agreement that will sign off the extinction of our people,” the representative from Barbados said.

India complained that developed countries were not fulfilling their obligation while asking developing countries to step up their own financial efforts. Any agreement could not ignore historical responsibilities of the developed countries, India’s speaker said. Others such as Colombia criticised the weakening of the ambition mechanism. The EU highlighted the same issue, saying that it was critical that parties came back to the table in 2021 to raise ambition. The EU also criticised that international transport was not included in the draft anymore and asked that those countries “in a position to do so” should join developed countries to increase financial flows to vulnerable countries.

Saudi Arabia showed resistance to a strong long-term goal and to any clear obligation for countries to contribute financially according to their ability. Bolivia and Venezuela joined the country in rejecting the idea of carbon markets.

“It’s not bold enough and not yet ambitious enough,” EU energy commissioner Miguel Arias Cañete said about the latest draft of a Paris climate agreement, released on Wednesday afternoon. Speaking on behalf of the EU and the “High ambition coalition”, a group of more than 90 countries including the European Union, the United States and 79 African, Pacific and Caribbean (APC) states, Cañete said that there was a hard work ahead to improve the text substantially. The ambition mechanism was the “beating heart” of the agreement, said coalition initiator Tony de Brum, foreign minister of the Marshall Islands.  He called on more countries to join the coalition. “We will continue to meet informally to build momentum,” he said.

German environment minister Barbara Hendricks said the coalition was united by “our fight for a strong long-term goal and a strong reference to 1.5°C”. Her coalition partner from The Gambia added that “those who are capable of doing more should do more than the lowest common denominator.” US negotiator Todd Stern added: “The high ambition coalition is exactly what we need right now.” He emphasised the need for strong revision and ambition cycles every 5 years.

Hendricks said in a statement on Wednesday evening that the new draft was a step forward and fewer brackets meant that the way was paved for concentrated discussions on the ministerial level addressing the remaining controversial issues. Ambition was one of these issues, as were transparency, differentiation and the question of finance. “We are preparing for a long night,” she concluded.

Regine Günther, director general for policy and climate at WWF Germany said that the new draft text didn’t make it clear what direction the agreement was going to take – there were still options for many outcomes in the text. The WWF was dismayed that options for investment in climate friendly technologies had been deleted in the new text and called for an early stocktake of climate finance, emissions reduction and adaptation efforts. The reference to emissions from shipping and aviation had also disappeared from the text, NGO Brot für die Welt noted.

Official reactions from the UNFCCC parties will be heard in the next meeting of the Comité de Paris at 20:00.

The French COP21 presidency has presented the new draft agreement which has been shortened to 29 pages. Brackets in the new negotiating text have been reduced by three quarters, COP21 president Laurent Fabius said. “This is still too much,” he conceded but a lot of progress had been made since Saturday.

Views on loss and damage as well as on transparency had converged, Fabius said. But the cross cutting issues of differentiation, finance and the level of ambition of the agreement remained open and would require in-depth political discussion in the next hours. 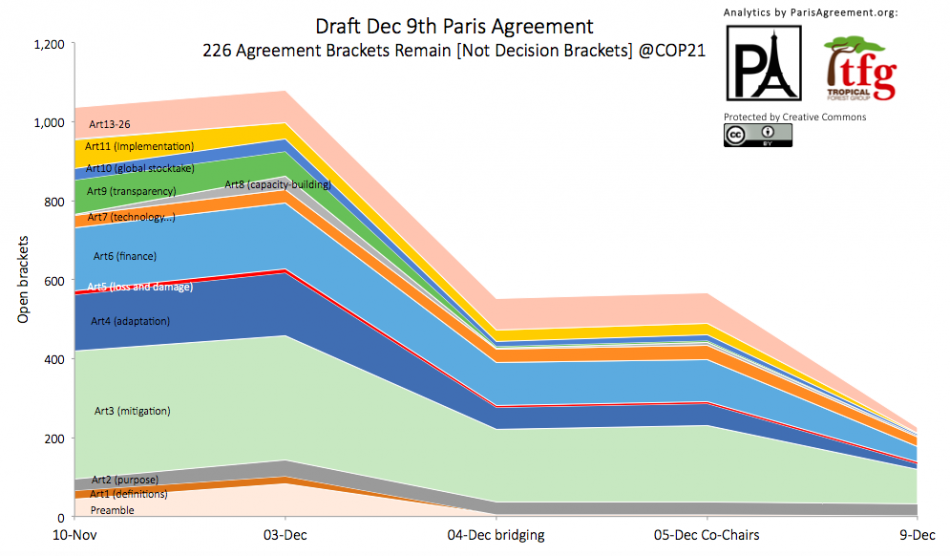 Delegates have now time till 20:00 on Wednesday to study and consult on the text. “You need to be ready to be working overnight and tomorrow,” Fabius told the plenary.

Countries’ reactions will show how much compromise has been found, and where fault lines remain.

The 1.5°C limit will not be the overall target in the negotiating result but it will receive a “strong mention” in the text, Germany’s Environment Minister Barbara Hendricks said. Asked whether that would mean that other positions dear to the heart of the German delegation, such as the target of “decarbonising the global economy” would have to be dropped in a trade-off, Hendricks reiterated that she was confident that either “decarbonisation” or “climate neutrality” would find their way into the final text.

Commenting on a briefing by the BASIC countries (Brazil, South Africa, India, China) on Tuesday, Hendricks said that some parties were posing their “most extreme positions” as the talks were coming to a climax but that they knew very well that they had to compromise in the end.

Germanwatch’s Christoph Bals and Jennifer Morgan from the World Resources Institute agreed with a view expressed by the German delegation that the French had organised an excellent process and showed great diplomatic skills. “It has been the best process ever,” Morgan said.

Bals highlighted the importance of the emerging alliances such as the high-ambition coalition of European Union, the United States and 79 African, Pacific and Caribbean (APC) states. The upcoming text would still have the major options on key issues standing against each other.

US Secretary of State John Kerry threw his weight behind the initiative saying that parties had to ensure that targets in the agreement would be as ambitious as possible.

Germany’s environment state secretary Jochen Flasbarth had been facilitating the talks on one of the major sticking points in the Paris negotiations – Article 6 on Finance. This includes the crucial differentiation issue of whether “all parties in a position to do so” should [financially] assist developing countries in mitigation and adaptation to climate change. Flasbarth said the result of “very intense consultations” on Tuesday had been a proposals for increasing the “overall coherence, structure and flow” of the article. In its latest version, the article spread over three pages, and still included numerous brackets and options. Further work was needed, Flasbarth and his co-facilitator from Gabon said on Tuesday evening at the "Comité de Paris" meeting. But they also said it was good news that parties had “found convergence” on the issue of technology development and transfer (Article 7).

Most facilitator groups said on Tuesday evening that further consultations were needed, e.g. on adaptation, loss and damage (where there was no clear common ground yet) and differentiation.

Please note: We will update this story later today. Follow us on Twitter (@cleanenergywire) for continuous updates on the latest take on the talks by the German delegation.