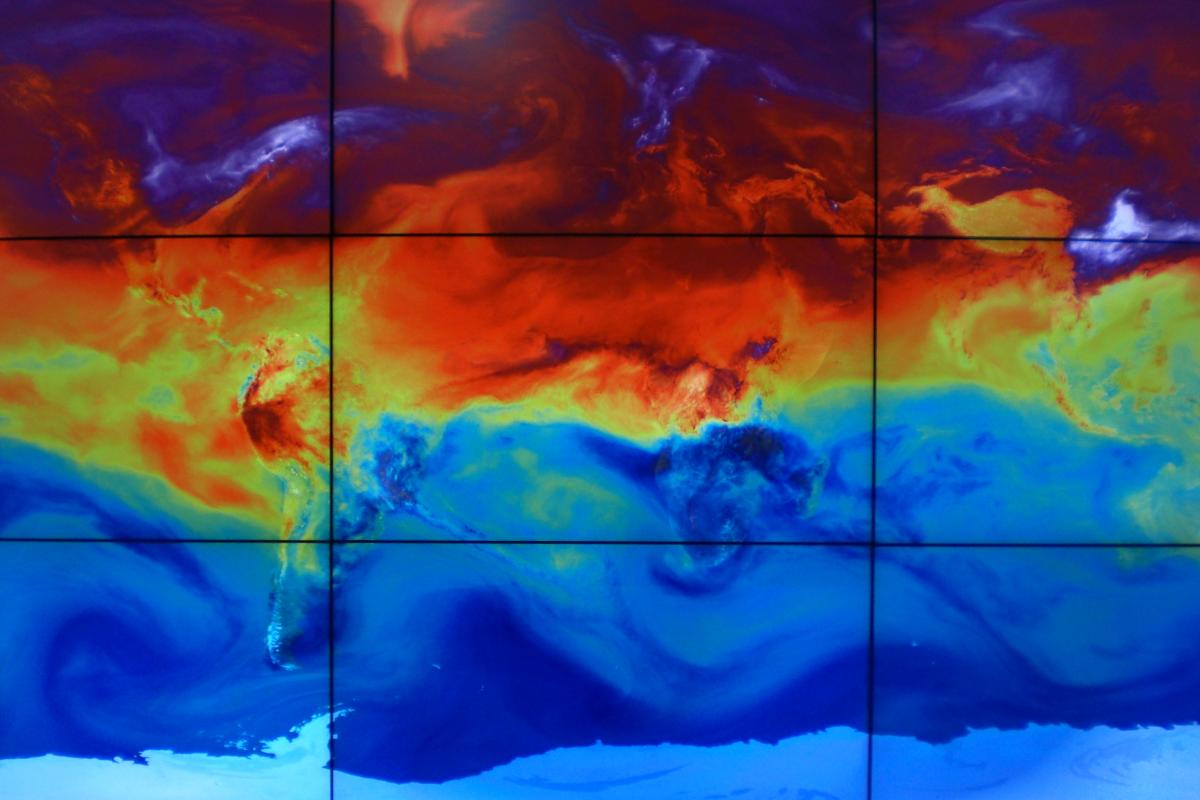 What it's all about: A screen in the US-American pavilion in Paris showing a simulation of atmospheric carbon concentrations. Photo: CLEW.
EU and African-Caribbean-Pacific group join forces / Review, finance, ambition – differentiation is key / Germany with “moderate” ranking in climate index

The standards for reviewing countries’ climate actions and the starting point for a system to ratchet up climate ambitions over time were still among the hotly debated issues at the Paris climate summit, German environment minster Barbara Hendricks told journalists.

In a move to add momentum to the negotiation, the European Union and 79 African, Caribbean and Pacific (ACP) countries joint forces, pushing for an ambitious climate deal. The two groups also announced they would allocate 475 million euros of the European Development Fund to support climate action, resilience building and the environment in the ACP countries up to 2020.

With the end of the negotiations in sight - the French presidency would like to have a final draft ready by Wednesday -, the German delegation was cagey about details in its media briefing. German facilitator on finance, Jochen Flasbarth had had talks with India and China last night, “which helped to get a bit more clarity”, Barbara Hendricks said. This was making her optimistic for the negotiations.

Careful not to point fingers, Hendricks explained that “a group of states” didn’t want an ambition mechanism to start before 2024. However, negotiations remained poised to yield a 5-year ambition cycle and a global stock take, Hendricks said. The WWF called for starting the review mechanism of current INDCs before 2020. Hendricks had said on Monday that she “could live with” a start in 2021.

The EU tried to accommodate concerns of developing countries about a unified system for measuring, reporting and verification (MRV) by offering longer transition periods. “We want that all countries report according to the same methods, but we understand that not everyone can start at the same time and that some countries need help to set up MRV first,” Hendricks said. However, if different states had to comply with different rules, transparency would suffer, she added.

The American negotiator Todd Stern, who favours ending the strict distinction between industrialised and developing countries, said that countries should nationally determine “as to whether they’re in a position to do so” when it comes to providing climate finance. Hendricks said the EU continued to argue for a more explicit wording such as “countries who are able to do so” should participate in climate finance. “But many countries are afraid of this,” she said, adding that there were options between the words “willing” and “able”.

NGO’s voiced concern that pressing negotiations into an overly ambitious timeframe could lead to a weaker outcome. The G77+China, a group representing over 130 developing countries, were worried that too many decisions would be made in small groups of bilateral meetings instead of the large plenum which, not allowing all countries to participate, Oxfam said. However, the so-called BASIC group (Brazil, South Africa, India, and China) who are also part of the G77+China said that they fully supported the French presidency and its process.

Veteran COP-observer Reimund Schwarze, professor at the Helmholtz Centre for Environmental Research (UFZ), told the Clean Energy Wire “all in all Paris was showing to be a success of diplomacy”. What had started with the open discussion forums (“indaba”) in Durban, was now brought to a possible success by the French presidency’s diplomacy.

In 2015 Germany will contribute another 50 million euros to the international adaptation fund, the government announced. So far, Germany has paid 90 million euros into the $485 million fund, which gives accredited project developers direct access to the money. The adaptation fund is suffering from a finance gap because low prices on the carbon market have reduced its usual source of income from allowances of the Clean Development Mechanism.

The 50 million euros may look little in the light of the $100 billion (anually by 2020) promise of developed countries, Jan Kowalzig from Oxfam Germany commented. However, the fund was highly important in the political negotiations as it served as a barometer to the relationship between rich and poor countries.

As the global economy is becoming less energy intensive there are signs for a global decarbonisation, Germanwatch and CAN Europe said when they published its “Global Climate Change Performance Index 2016”. Germany ranks 19th out of 58 countries in the index which is led by Denmark, the UK and Sweden. This “moderate” result was due to high emissions from lignite. However, the index did not take any latest policy shifts in the countries into account that could place both Denmark and the UK further down the list, the authors said in Paris.

In a high-level panel on transport – one other weak spot of German climate policy – representatives for various international carmakers and several ministers stressed that e-mobility had huge potential to help lowering carbon dioxide emissions. Thomas Becker, vice president governmental and external affairs and sustainability at BMW, said government incentives determined the success of e-cars at this stage. One in four BMWs now sold in Norway was an e-car thanks to the country’s attractive support schemes.