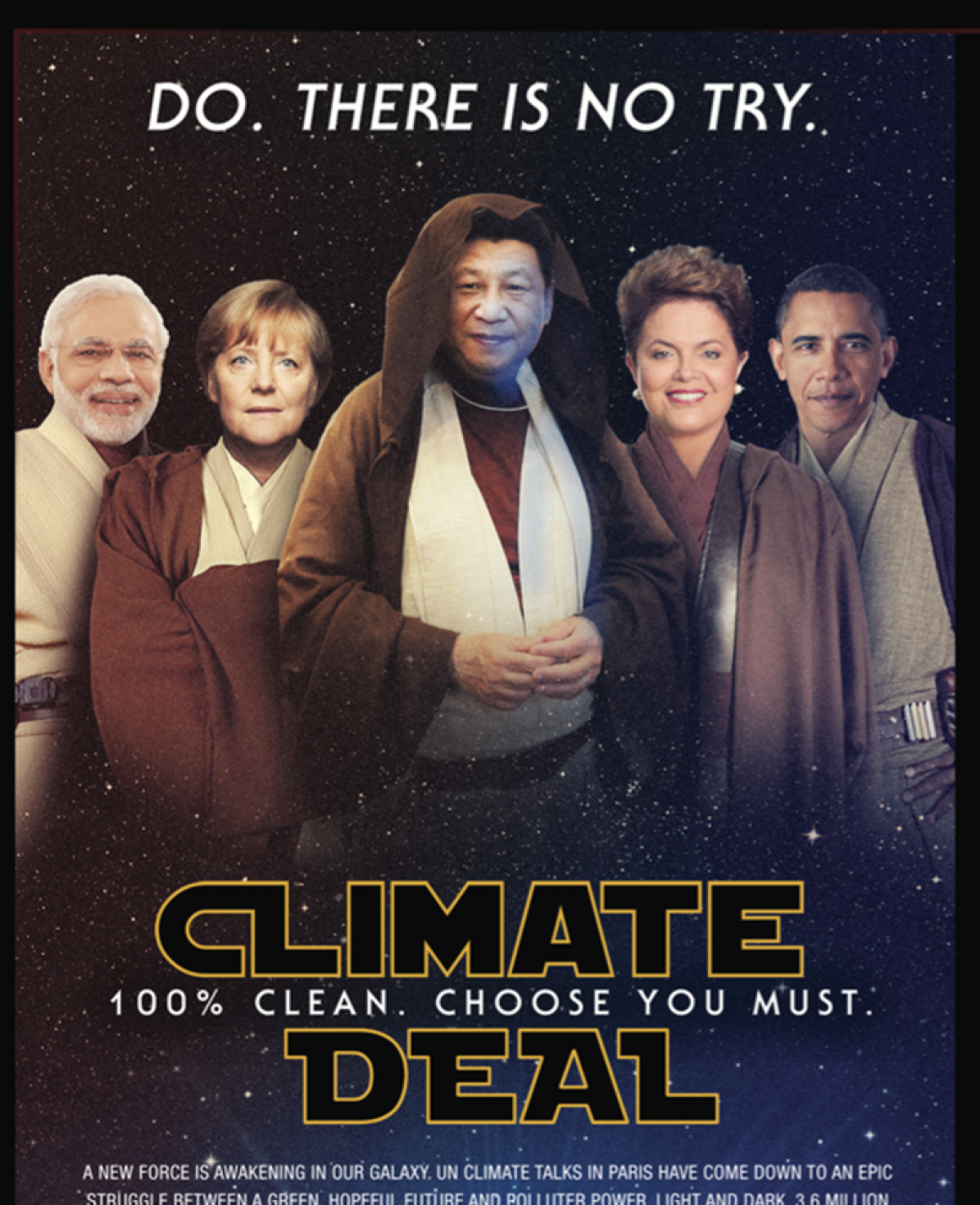 Avaaz ad in the International New York Times - will it be down to phone-call diplomacy between leaders to reach a deal in Paris? Photo: Avaaz.
Agreement text expected Saturday morning / Germany, EU reiterate push for ambitious deal/ Leaders get on the phone/ Scientists fear weak deal

Germany and the EU vowed to keep up their fight for tools and mechanisms needed to implement emissions reductions at the climate summit in Paris. “Ambition requires substance,” Germany’s environment minister Barbara Hendricks said at a press conference of the so-called high ambition coalition. This included a strong mechanism to increase countries’ emission reduction over time and a transparent system of reviewing these efforts. The EU wasn’t against differentiating responsibilities but wanted a fair and modern system of differentiation, she said.

For China, the current phrase in the text of “reaching greenhouse gas emissions neutrality” was a “super, super red line”, observers said after last night's talks. Like India, the Chinese pushed for "low emission pathways over the course of the century" instead.

The high ambition coalition reiterated its stance for an ambitious operationalisation of the long-term goal. Hendricks said the coalition would fight for greenhouse gas neutrality. “But it’s not a done deal yet." Chancellor Angela Merkel would weigh in on negotiations if necessary, Hendricks said when asked about high-level talks of other world leaders.

Brazil became the latest global heavy-weight to join the coalition of over 100 countries pushing for a ambitious climate deal.

The French presidency scheduled the next plenary meeting with a final version of the text for 0900 am CET on Saturday, saying this still needed to be confirmed.  Hendricks had told journalists earlier the French would present the text at 0800 am.

The French had pushed back the orginal Friday deadline for a final text after big players such as China and India flexed their muscles in overnight talks, rejecting the mention of contributions to finance and reviews. Reuters reported that US president Barack Obama and his Chinese counterpart Xi Jinping discussed the crunch points over the phone.

Many observers had been hopeful for an imminent deal despite a mixed reception of the draft. But climate scientists fear that the new treaty will turn out too weak and vague.

Hans Joachim Schellnhuber, director of the Potsdam Institute for Climate Impact Research, said the next to last draft was always more ambitious than the final outcome. The reference to “reaching greenhouse gas emissions neutrality” might still disappear – which wouldn’t be consistent with science. “The current text is actually an extremely progressive one, believe it or not,” Schellnhuber said.

Emissions had to peak by 2020, and complete decarbonisation was needed by 2050, he said. “Once we leave Paris every country should set up a decarbonisation scheme,” Schellnhuber said.

Johan Rockström, director of the Stockholm Resilience Center, warned it was a dangerous gamble to bet on negative emissions and carbon sinks to achieve greenhouse gas neutrality. “This opens up a risky future where there is carbon capture and storage (CCS) while we continue to burn fossil fuels,” he said.

In some respects the draft text was weaker than what came out of the ill-fated conference in Copenhagen in 2009, Kevin Anderson, deputy director of the Tyndall Centre for Climate Change Research, said. The Copenhagen text had been in accordance with science and had included a reference to emissions from shipping and aviation. The Paris text also completely failed to mention fossil fuels, he said.

„They did not get the big success, even though the direction is right. It’s good that there is a long-term goal and the review of national measures will start before the agreement becomes valid. It’s bad that this review is not binding and that the long-term goal should only be achieved in the second half of the century."

„It’s good that all countries recognise the issue of climate-related loss and damage as an important one. However, positions on the responsibility to lend support to victims of climate change are so far apart that an agreement is not in sight yet. Loss and damage will be the dramatic issue for the final hours.”

Hubert Weiger, head of Friends of the Earth (BUND) Germany:

“There is the danger that the climate agreement will be extremely weak. It does not mention the necessary exit from oil, coal and gas by mid-century.”

“Key conflicts remain unresolved one day before the end of the conference. What will poorer countries’ responsibility in future climate policy be? How will climate damages be dealt with and how will countries be put under pressure to improve their weak climate action plans?”

“Critically, we could be closer to an agreement on a review of country pledges before 2020, but the current 2019 timeframe leaves very little time for countries to enhance those pledges. They need to do it earlier.“

"The text shows important progress, but key issues remain open. "It's an important signal that the countries commit to greenhouse gas neutrality in the course of the century.

"It will be crucial how countries react to the proposal and that the ambition mechanism will be improved."