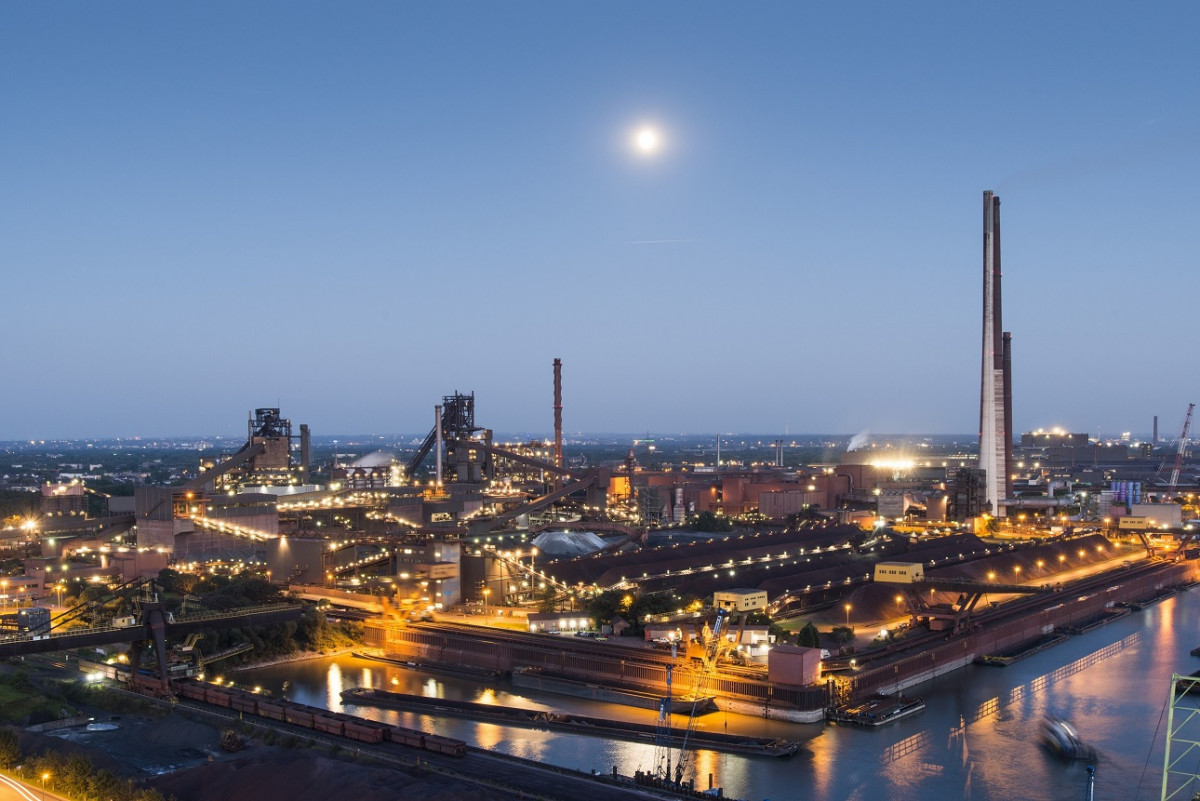 The effects of the war in Ukraine will have a major impact on Germany’s most important state election this year, making next week’s vote in heavy industry heartland North-Rhine Westphalia another gauge of the public’s view of the federal government’s handling of the crisis. Voters in the federal state, whose population of 18 million is on a par with the Netherlands or Romania, will head to the polls on 15 May, with energy security and affordability their top concern. Pollsters expect a tight race between the incumbent conservative Christian Democrats (CDU) and the opposition Social Democrats (SPD). The outcome will impact energy transition policy at both state and federal level.

The Ukraine war and its effects on energy supplies and prices will be on many voters’ minds when they cast their ballot in the German state of North-Rhine Westphalia on 15 May. The election in the Western state with a strong heavy industry presence and a population of 18 million is Germany’s most important one this year. The highly uncertain result will not only influence the progress of Germany’s landmark energy transition in that state, but also the federal government’s ability to fulfil its promise to massively accelerate the country’s move towards climate neutrality.

The election is mainly seen as a voter judgement on how the federal government, a coalition of the Social Democrats (SPD), the Greens and the pro-business Free Democrats (FDP), handles the fallout from the energy crisis exacerbated by the Ukraine war. Secure and affordable energy supply has become the primary concern for voters in Germany’s most populous state, followed by rising inflation rates triggered by energy price spikes, according to a Forsa poll.

Consequently, the war in Ukraine and its economic and social ripple effects have dominated the campaign debates. An embargo on Russian gas imports would hit NRW, one of Europe’s core industrial regions, particularly hard, as many jobs rely on readily available energy supplies for furnaces, steel works, chemicals production and other energy-intensive processes.

But the dangers of global warming are also on the ballot. Last summer, parts of the state were hit by torrential rains resulting in disastrous floods that killed more than a hundred people. Climate change was widely seen as a contributing factor, and many voters were frustrated with the state government’s disaster management, which is still being debated today. Moreover, rows over the ongoing expansion of opencast coal mines constantly keep the end of fossil fuel use on the state’s news agenda.

The election looks set to be a neck-and-neck race between incumbent state premier Hendrik Wüst from the conservative Christian Democrats (CDU) – who currently heads a coalition government with the FDP – and SPD candidate Thomas Kutschaty. Wüst took over the state premiership from Armin Laschet at the end of last year, after Laschet led the CDU as chancellor candidate to its worst federal result in decades.

Recent surveys suggest the current state coalition will not survive the election, as both the CDU and the SPD have been polling at around 30 percent (see graph) and the FDP at only seven percent. In contrast, the Greens look set to almost triple their share of the vote by reaching around 18 percent, which would make them the third largest party behind the SPD and the CDU. As a “grand” coalition between the CDU and the SPD appears highly unlikely, the Greens are set to become part of the state’s future government in a coalition with either of the two leading parties, and possibly joined by the FDP.

Voters in NRW favour a coalition between the SPD and the Green Party. Forty-one percent would opt for this alliance, while only 33 percent want a continuation of the current CDU/FDP government, a poll commissioned by public broadcaster WDR has found. 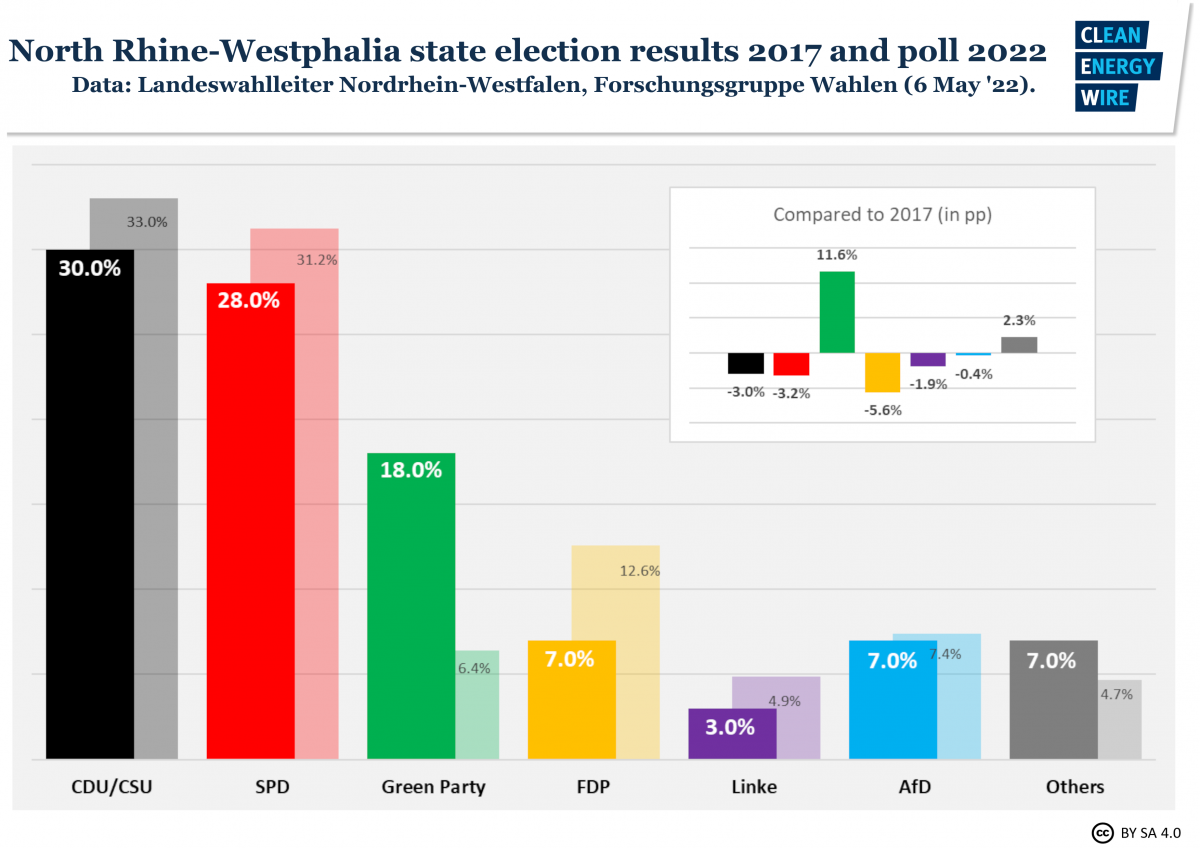 The Greens are boosted by their party’s participation in the federal government, where economy and climate minister Robert Habeck and his party colleague Annalena Baerbock as foreign minister have won plaudits for their Ukraine crisis management.

Regional factors also play an important role. The Greens are seen as the most competent in providing solutions to environmental and climate challenges, including in NRW’s notoriously overburdened transport sector, according to a poll. Almost half of voters believe the Greens lead in climate action, a reputation the party sought to bolster with an action programme presented in late April. Due to the strain on energy supply caused by the war in Ukraine, it focuses on efficiency and energy saving measures, for which top candidate Mona Neubaur wants to hire more energy advisors, and bolster support for changing heating systems and retrofitting buildings. The Green Party also calls for making solar panels mandatory on suitable roof spaces.

The four main parties’ candidates have all said they are in favour of pulling forward the coal exit to 2030 from 2038, the current target date. They also agree that Germany must become independent from energy imports from Russia. Even the Greens’ Neubaur said she was prepared to leave coal power plants that are set to be decommissioned connected to the grid for a transitional period, while also calling for a renewable energy “booster” by scrapping rules banning the construction of wind turbines within certain distances from residential areas.

The incumbent government last year announced the goal of reaching 50 percent renewables in power production by 2030, up from the current figure of less than 20 percent. Coal power still plays a particularly important role in NRW’s energy system, a legacy of decades of close links between municipalities, industrial companies and the coal mining industry in the region. Besides more renewables, the CDU-FDP coalition also said more gas-fired plants are needed to replace coal, provide energy for industry and facilitate the state’s ambitious buildout of hydrogen infrastructure, according to its “energy plan” released just before the  outbreak of the war in late February 2022.

But reaching the ambitious renewables goal in just eight years is hampered by the fact that NRW already lags behind on existing climate action programmes and is slow to roll out wind turbines and other renewable power infrastructure. The expansion of wind power in particular is a hotly debated topic in the densely populated state that has seen large-scale environmental degradation due to the extensive coal mining activities in NRW for hundreds of years.

A minimum distance of 1,000 metres between wind turbines and residential areas that the acting CDU-FDP government opted for at the state level makes finding adequate construction sites more difficult, but the rule is under fire amid Germany’s push for greater energy independence through renewables and is set to be challenged if the current coalition parties are voted out. The SPD and the Greens both want to scrap the strict regulation that keeps large chunks of the territory out of reach and thus complicates the task of finding available construction sites. In contrast, state premier Wüst argues that construction in woodlands could be eased instead.

The effects of the state election will not only shape the future of NRW’s energy transition but could also have significant effects on national policy. The state holds six seats in the council of federal state governments, which can heavily influence legislation. An SPD-led government in NRW would rob the opposition conservatives of the chance to block legislation in the chamber, which could give the government more leeway to implement its ambitious climate agenda.