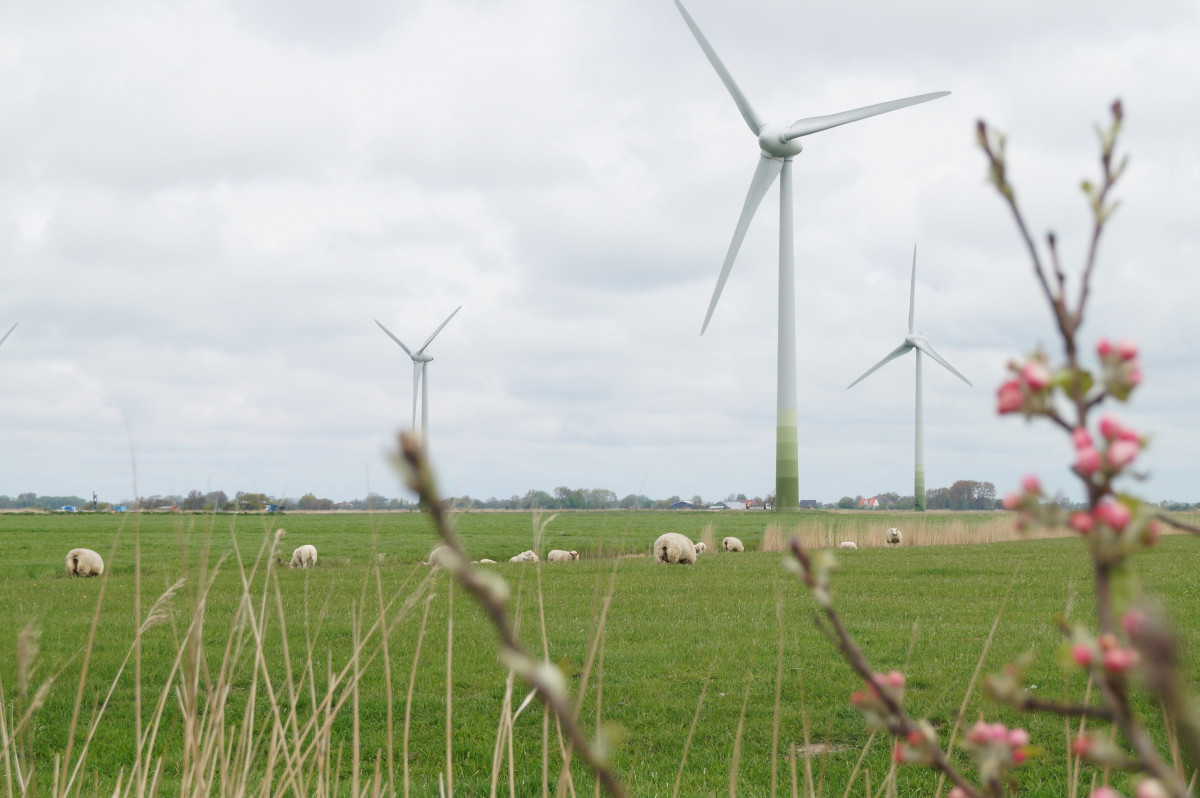 Voters in the northern wind power state of Schleswig-Holstein head to the polls this Sunday (8 May) to elect a new parliament in one of the regions most crucial to Germany’s efforts to phase out Russian fossil fuel imports and massively expand renewables. The state has been trailblazing the energy transition with its expansive wind energy production, and will become the location for at least one of the planned import terminals for liquefied natural gas (LNG). In the medium and long term, incumbent state premier Daniel Günther from the conservative CDU, who looks set to get a second term, banks on renewables and green hydrogen to ensure the state’s position as a key energy transition frontrunner.

Germany’s northernmost state, Schleswig-Holstein, has been trailblazing the energy transition with its expansive wind energy production and is positioning itself as crucial to Germany’s energy independence from Russia. As the war against Ukraine has exacerbated the energy crisis in Germany, the upcoming regional election on 8 May has put the focus on how Schleswig-Holstein can be an energy leader in the country’s climate-neutral future.

"Companies are looking for regions where there is sufficient green electricity, talking about the 'clean energy valley'," said incumbent Schleswig-Holstein state premier Daniel Günther in an interview with Die Welt. “It will be important that we now speed up the expansion of the electricity grids. Then the south and west of Germany will finally also be able to benefit from the renewable energy generated here in the north,” said Günther.

With the grid expansion lagging several years behind and the growth in renewables capacity in the southern German industry hubs not being comparable to the boom in the north, some companies are now actively choosing the north of Germany over the south for better access to clean and cheap energy.

Daniel Günther from the conservative CDU currently leads a three-party coalition with the Green Party and the pro-business FDP, and looks set to get a second term. According to an Infratest Dimap poll, the CDU has a 38 percent share of the vote and with the FDP standing at 9 percent, it could be possible to form a CDU-FDP coalition, excluding the Greens from the coalition. The Green Party has been part of Schleswig-Holstein government coalitions since 2012 (and previously 1996-2005) and has helped to establish renewable energies – in particular in the form of onshore wind parks, but also bioenergy – as an important industry in the rural state. As one of few German states, Schleswig-Holstein has already achieved the new government target of using two percent of its surface area for wind power production.

However, the Green Party is also expected to show a good result, so that the CDU could also chose them as a partner for a 2-party government. Even a Green victory was not out of reach a year ago when they stood at 27 percent in the polls, ahead of the CDU with 25 percent and the SPD with 21 percent. Since then, the Greens have plummeted to 16 percent, however still up from the 12.9 percent share of the vote they received in 2017. Opposition party SPD (Social Democrats) is expected a result of around 19 percent of the vote, according to recent polls.

According to Zeit online, Günther pointed out that the three-party coalition worked well together for five years despite the differences between the CDU, Greens and FDP. "If you have an approval rating of almost 80 percent of the people who say they are well governed in Schleswig-Holstein, who would I be if I as prime minister didn't say I would also like to continue governing in this constellation in Jamaica with the Greens and FDP," said Daniel Günther, reported Zeit online.

Whatever the result, the new government will continue establishing Schleswig-Holstein an essential energy transition hub. The state has been dubbed 'clean energy valley' due of its attractive surplus of clean energy that has drawn the attention of green companies. It has access to both the North and Baltic Sea, making it also a prime location for importing natural gas and potentially green hydrogen, necessitating the infrastructure to import the energy. More than 100% of the state's electricity demand is met by renewable sources, with a majority of it coming from wind power onshore and offshore. 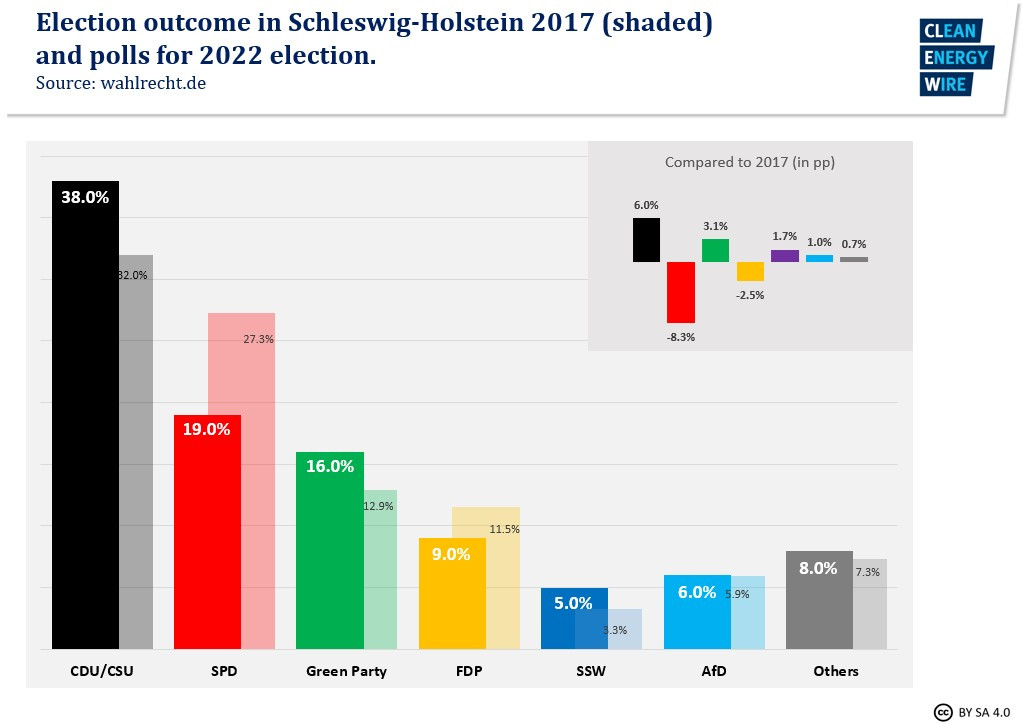 Vast majority of residents in favour of renewables expansion

Around  nine out of ten people in Schleswig-Holstein feel that the expansion of renewable energies is the right thing to do, according to public broadcaster NDR. With the Ukraine war upending many aspects of Germany’s previous energy policies, the focus on renewables is seen as a solution both to the climate crisis and heavy dependence on Russian fossil fuels.

German leaders are also faced with quickly adapting existing, fossil energy infrastructure and developing new strategies to untangle their dependency on Russia. This is viewed more cautiously by Schleswig-Holstein citizens where six out of ten support increased oil and gas imports from countries such as Qatar or Saudi Arabia in response to the Ukraine war and around five out of ten support extending the operating lives of German nuclear power plants. Chancellor Olaf Scholz announced that Germany will build domestic liquefied natural gas (LNG) import terminals, one of which will be in Schleswig-Holstein.

Schleswig-Holstein to become location for LNG and hydrogen import

Germany has a well-developed natural gas pipeline grid and is connected to terminals in neighbouring countries, but it does not currently have its own port to receive LNG directly. The North Sea port of Brunsbüttel will now be one of the first where a floating LNG terminal will be put into action, the latest energy security report by the federal government states.

"Schleswig-Holstein will do everything in its power to ensure that the chancellor's clear commitment to the construction of an LNG terminal in Brunsbüttel is taken forward swiftly," said state premier Daniel Günther (CDU). On top of gas imports, the German government has promised half of the funds for energy company RWE to build an ammonia terminal at the Brunsbüttel LNG terminal to facilitate the conversion of the entire site “ready to import green molecules” at a later stage.

“We need an accelerated energy transition and an accelerated expansion of renewable energies. That is the end-all be-all for a cheap, independent and secure energy supply,” said federal economy and climate minister Robert Habeck (who also hails from Schleswig-Holstein and was its energy transition minister between 2012 and 2018) earlier this year. “At the same time, we need gas for the transition, and here above all LNG, if we want to free ourselves from Russian dependence,” said Habeck.

In the statement, Habeck emphasised the importance of adapting the infrastructure to hydrogen and creating sufficient large-scale supply. Habeck said, “We are planning the switch to green hydrogen or hydrogen derivatives such as ammonia from the outset. This applies to the construction of the hydrogen infrastructure.”