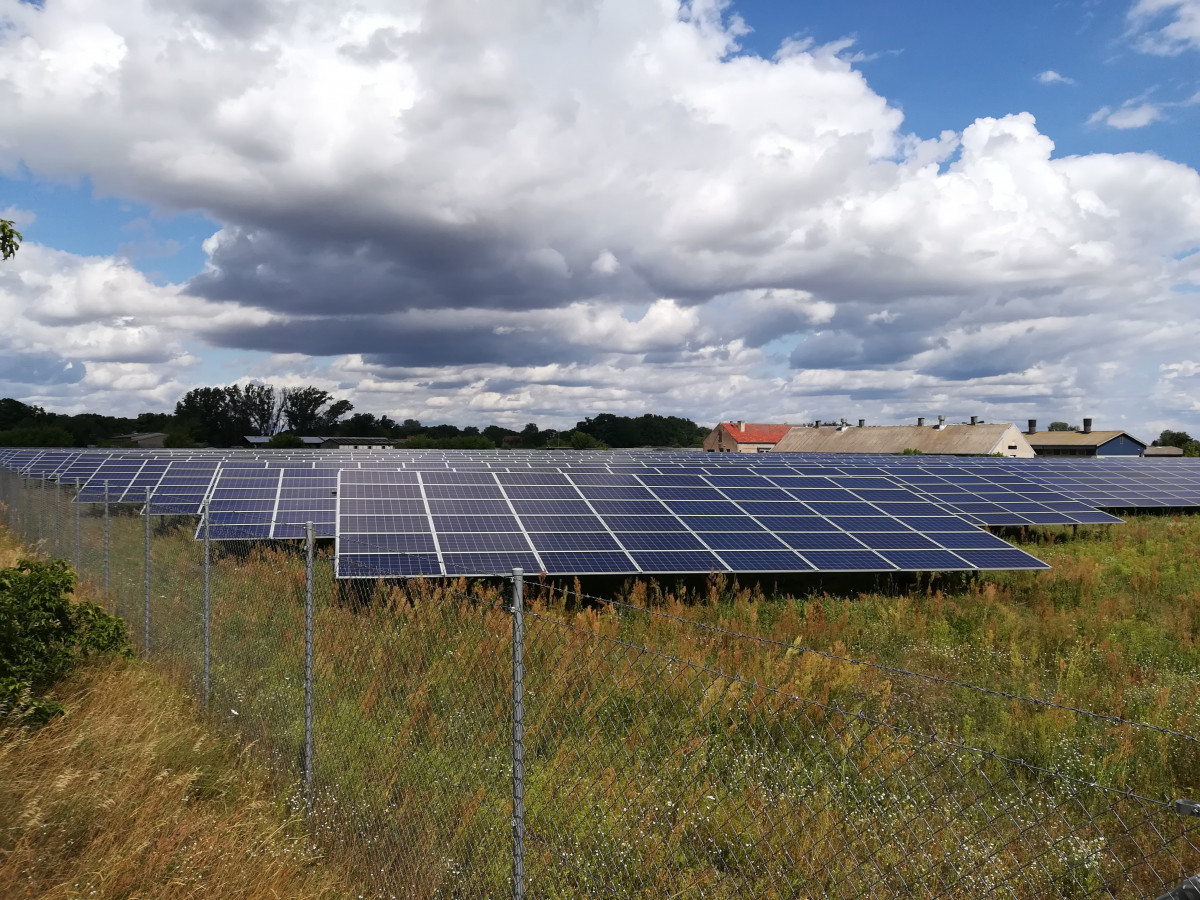 The German government has increased renewables targets again - solar PV capacity is to grow by 22 GW annually as of 2026. Photo: Wettengel/CLEW.

Germany wants to fight the climate crisis and its heavy dependence on fossil fuel imports by speeding up the rollout of renewables with a massive overhaul of key energy legislation. In the “biggest energy policy reform in decades,” the coalition of Social Democrats (SPD), Greens and Free Democrats (FDP) proposes to lift the rollout of wind and solar power “to a completely new level” in a draft law amounting to more than 500 pages. It aims to free up new land for green power production, speed up permit procedures, and massively increase wind and solar additions to achieve a nearly 100-percent renewable power supply by 2035. The energy industry welcomed the package as a good starting point for the necessary faster roll-out of wind and solar energy in Germany. [UPDATE add reactions from industry]

After little more than 100 days in office, Germany’s new government has presented what it calls the “biggest energy policy reform in decades” to massively increase the buildout of renewable energies. The coalition partners SPD, Green Party and FDP say the more than 500-page so-called “Easter Package” of reform proposals tackles not only the climate crisis, but helps the country in its efforts to become independent of Russian fossil fuels.

Chancellor Olaf Scholz highlighted this double benefit of Germany’s goal to become climate-neutral by 2045 with the help of renewables. Today’s package is a “very important contribution” to these goals, said Scholz in the Bundestag during parliamentary question time. “With the ‘Easter Package’ we are showing what we intend to do. Now more than ever, we will become independent of the use of fossil resources. That is our task.”

Today’s package is part of a comprehensive programme of climate action measures the parties had promised for 2022 in last year’s coalition treaty. However, Russia’s war against Ukraine has added a sense of urgency to not only getting Germany’s policy back on track to reaching climate targets, but also becoming independent of fossil fuel imports as quickly as possible. The government said it sees renewable energies as “a matter of national security.” The economy ministry has said it will introduce a second package of legislative reforms by the summer.

The package includes draft reforms of the Renewable Energy Act (EEG), the offshore wind law, the energy industry law and legislation to speed up power transmission grid development. The package will now be sent to parliament and could be adopted still in the first half of 2022.

Germany’s energy industry association BDEW said the legislative drafts contained important decisions for the expansion of renewables in Germany, such as raised tender volumes for wind and solar and the introduction of contracts for difference. “It must be clear to all ministries involved and all levels – be it federal or state – that the expansion of renewable energies is the order of the day, not only for climate protection but also to become less dependent on fossil energy imports,” said BDEW head Kerstin Andreae.

There could be a big hurdle for the package in the further legislative process. The pro-business Free Democrats said their formal agreement to the package in cabinet is meant to get the process going. However, “deviations from the coalition agreement (e.g. climate-neutral electricity system 2035, CfD) must be corrected in parliament,” wrote deputy parliamentary group leader Lukas Köhler in a message on Twitter.

The centrepiece of the reforms is the Renewable Energy Act (EEG) – the now 22-year-old legislation that enabled the share of renewable power to grow to almost 45 percent. Most importantly, the amendments provide for much higher capacity addition targets to reach the new government goal of having 80 percent renewable power (some 600 terawatt-hours) in the mix by 2030 and almost 100 percent green electricity by 2035.

By 2030, installed onshore wind capacity should reach 115 gigawatts (GW), the government says. Annual capacity additions therefore have to reach 10 GW as of 2025. Solar PV installations will amount to 22 GW per year as of 2026 to achieve a total capacity of 215 GW by the end of the decade. Offshore wind additions are increased as well to reach a minimum of 30 GW per 2030 and 40 GW by 2035, and 70 GW by 2045. While the government wants to incentivise the production and use of biomethane in highly flexible plants by increasing tender volumes, the use of biomass for power production will be superseded by its use in transport and industry.

In light of the war in Ukraine and the urgent need to become independent from imported fossil fuels, the ministry has increased these numbers again compared to a first proposal made in February 2022. 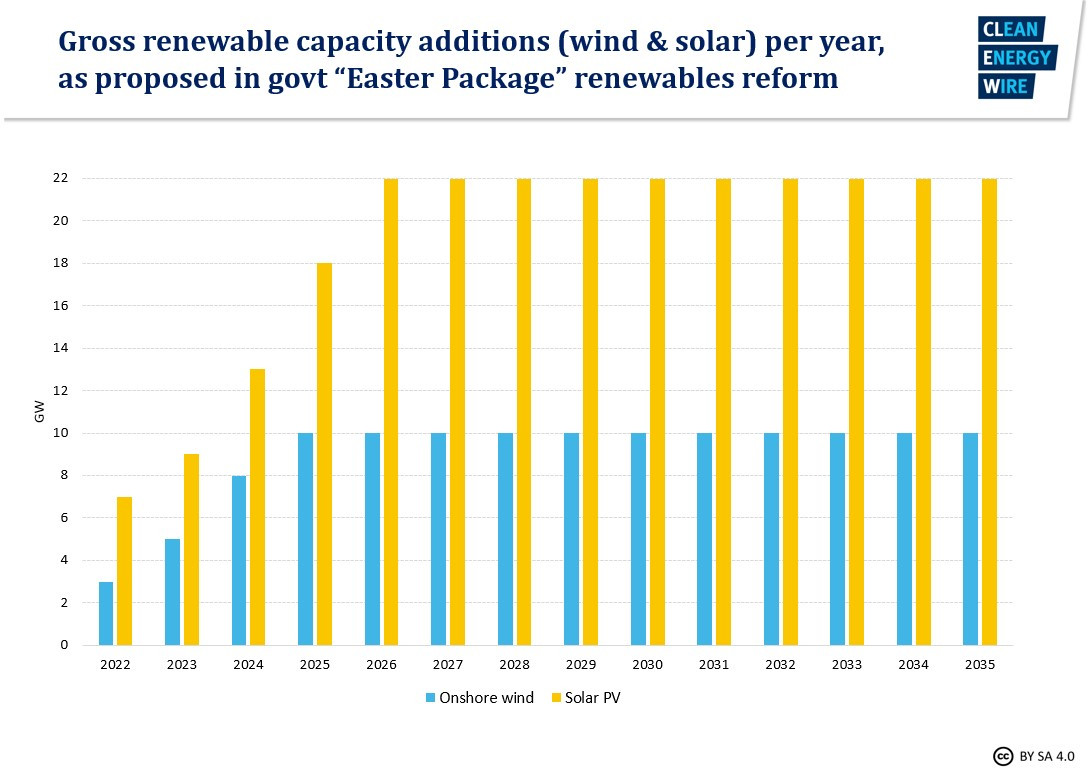 To ensure that these ambitious growth scenarios are not hampered by lengthy planning procedures, local opposition and contradictions with other protected goals, the government establishes the principle that the use of renewable energies is of overriding public interest and will be given priority over other concerns until greenhouse gas neutrality is achieved.

To this end, the economy and climate ministry together with the environment ministry already presented a new compromise that is to reconcile bird protection and wind energy expansion.

With new distance rules between wind turbines and weather radar installations as well as rotating radio beacons, which so far prevented the building of new wind parks in their vicinity, some 5 gigawatts of onshore wind capacity can be freed up, allowing for around 1,200 new wind turbines to be built within a short time, economy and climate minister Robert Habeck said.

To achieve higher acceptance in the population, citizen energy initiatives will be exempt from participating in the tender scheme; it will be made easier for local communities to benefit financially from wind parks and ground-mounted solar PV nearby.

In addition, the “Easter Package” also includes changes to federal grid planning. In general, all future power network planning is to be undertaken to achieve a climate-neutral grid in the most efficient way; and to ensure that the grid will keep track with the renewables expansion at hand. Initially, 19 new grid expansion projects will become part of the federal grid requirement plan, and another 17 will be amended to best serve the energy industry. To make grid planning and building faster – Germany lags behind with its grid expansion plans by several years – permission procedures are to be simplified and hurdles reduced, the government says.

While renewables expansion would receive a significant boost through the package, the drafts did not address grid expansion sufficiently, said Tim Meyerjürgens, COO of power transmission grid operator TenneT. Both would be needed to make the energy transition a success. “We had introduced further important procedural simplifications into the discussion, but we still see too little of this in the current draft law for a significantly accelerated grid expansion on land and at sea in the future,” said Meyerjürgens.

The renewable energy industry welcomed the proposals as a first step, but called for changes in the legislative process. “We still see a need to make adjustments across all renewable energies. These changes must be made with the summer package at the latest,” said renewables association BEE president Simone Peter. The BEE highlighted shortcomings on solar power. “The solar targets set out in the cabinet draft can only be achieved if the government makes self-supply and direct supply with solar power significantly more attractive and provides sufficient site areas for solar parks,” said Peter.

Wind energy association BWE says the Ukraine war and the wish to become independent of Russian fossil fuels has provided an extra push to renewables development. “[The Easter Package] shows that, with energy security in mind, there is a great will to advance wind energy quickly,” said BWE president Hermann Albers. He added that the upcoming ‘Summer Package’ should ensure that approval procedures for new wind parks are accelerated. “We must significantly reduce the approval period from the current average of six years.”

Andreas Kuhlmann, head of the German Energy Agency (dena), said the proposals represented “a new impetus in energy and climate policy that many have been waiting for.” However, he also said that the measures outlined would not be sufficient to reach the goals the government laid out in its coalition agreement. Parliament would “hopefully” introduce a number of changes, said Kuhlmann.

Environmental NGO Greenpeace Germany welcomed the package. “Habeck's legislative package is more resolute than anything we have seen on this in recent years,” said the NGO’s Reenie Vietheer, but criticised that citizens’ energy had received too little attention.

German environmental umbrella organisation DNR called the package “a first important step” towards energy sovereignty through wind and solar power. DNR president Kai Niebert called for adjustments in the parliamentary process. “Among other things, we need the introduction of a solar obligation on all roofs, the abolition of arbitrary distance requirements to residential settlements and the accompanying provision of sufficient areas for onshore wind energy,” said Niebert.