Factsheet
Germany has a well-developed natural gas pipeline grid, but so far does not have its own import terminal for liquefied natural gas (LNG). Following harsh criticism by US President Donald Trump over the contentious Russian-German natural gas pipeline Nord Stream 2, the German government has promised to speed up a decision on whether to provide financial backing for a new LNG import terminal, which could receive LNG from the US, among other exporters. This Q&A looks at the current situation of LNG in Germany and Europe, as well as future plans. 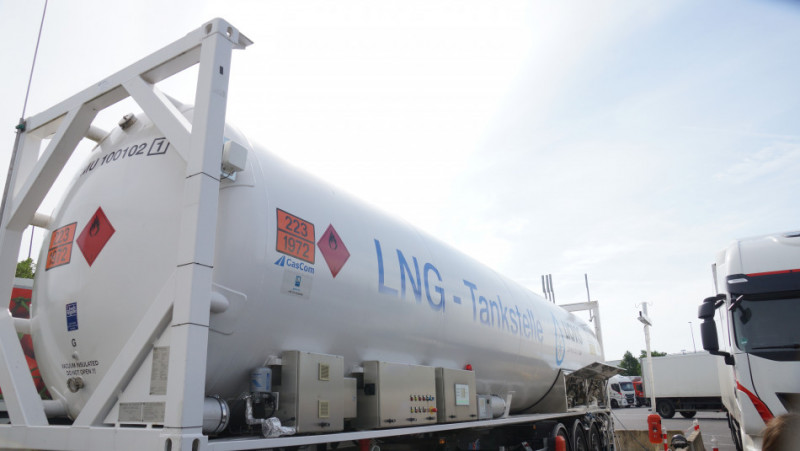 LNG, or liquefied natural gas, is natural gas that has been super-cooled (−162°C) to a liquid state for easier storage and transportation. In its liquid state, natural gas has 600 times less volume than its gaseous equivalent, and LNG can be transported by ship, truck or rail to places not reached by traditional natural gas pipelines, or used as a fuel directly. In general, the gas is first liquefied in the country of origin, then transported via ships and re-gasified at the destination, before it is fed into existing gas grids and pipelines.

Compared to other fossil fuels, natural gas emits the least amount of carbon dioxide when burned, prompting many countries to see gas as a potential “bridge fuel” between dirtier fossil fuels and carbon-free energy sources. However, natural gas is primarily composed of methane, itself a powerful greenhouse gas, and the rate of methane leakage in natural gas production, transport and storage is still hotly debated.

In 2017, global natural gas production hit a new record of 3,768 billion cubic metres (bcm), and we are currently seeing a “wave” of new LNG projects around the globe, according to the International Energy Agency (IEA). In 2017, LNG accounted for about a third of the global gas trade, with the increase driven in large part by growing exports from Australia and the US.

Where does it come from?

Qatar and Australia are the world’s biggest exporters of LNG. The US is also ramping up LNG exports, and could soon become the world’s third-largest exporter. In 2017, the US accounted for nearly three-quarters of LNG export growth, according to an IEA report. Other major exporters include Malaysia, Nigeria, Indonesia, Algeria, Russia, Trinidad & Tobago, Oman and Papua New Guinea.

Who is buying it?

Japan and China are the world’s biggest LNG-importing countries, followed by South Korea. China alone was responsible for more than half of net LNG demand growth in 2018, and recently imported more than Japan during a one-month period. However, if all of its member countries are counted together, the European Union is the biggest importer in the world. In 2017, the European Union accounted for 13 percent of LNG imports globally, according to the US Energy Information Agency (EIA).

Likewise, LNG accounted for around 14 percent of total natural gas imports to the EU. The bulk of natural gas is imported via pipeline, mostly from Russia and Norway. Less than half of the EU’s gas needs are met by domestic production and the share is set to decrease over the coming years.

The European Commission says LNG can boost the EU's diversity of gas supply and so improve energy security. In July, European Commission President Jean-Claude Junker pledged that the bloc would import significant amounts of LNG from the United States as a concession to cool a potential trade war.

LNG terminals in the EU. The final decision for a German terminal location is still pending as of February 2019. Source - EU Commission

Where does Germany stand on LNG?

Germany was the world’s biggest importer of pipeline gas in 2017 and sourced over 90 percent of its consumption from abroad. About one quarter of Germany’s energy demand was covered by natural gas in 2018, the second most important energy source in the mix after mineral oil (aka petroleum products). Natural gas is the most important heating fuel for German households and Germany’s Federal Ministry for Economic Affairs and Energy (BMWi) says gas is set to play an increasing role in the transport sector. Russia, Norway and the Netherlands are Germany’s most important suppliers, according to the Federal Institute for Geosciences and Natural Resources (BGR).

The BMWi argues that importing LNG by sea from a range of  countries is a viable alternative to importing gas via pipeline. It is seen as a way to lessen concerns over security, diversity, reliability and affordability, especially as the Netherlands, one of Germany’s most important suppliers, has announced it will largely phase-out natural gas production over the next decade.

The German government says  LNG imports can contribute to a secure supply of natural gas “at competitive prices” and help reach national and European climate goals in line with the Paris Agreement.

Most of European gas supply until 2030 is tied to long-term contracts, so the market for new LNG suppliers like the US is comparatively small, though still worth billions of euros.

For years, it appeared there was no economic case for LNG imports to Germany, since Germany is well-connected to received natural gas through pipelines from neighbouring countries. Critics have also argued that LNG imports are more expensive than gas delivered via pipeline. But in a recent report, the IEA cited data indicating that LNG imports to Europe have been competitive in cost with pipeline imports.

Still, experts say that due to comparatively low production costs and recent investments, Russian natural gas supplier Gazprom still has ample room to manoeuvre regarding the price it charges for pipeline gas delivered to Europe.

German gas grid operators expect that Germany will increasingly become a central transit point for LNG that arrives in neighbouring countries and is then sent through the German pipeline network.

While Germany does not have its own regasification terminals for LNG, imports enter through terminals in neighbouring countries, especially Belgium and the Netherlands. Germany also receives some LNG in liquid form via road freight.

Even if there is no immediate financial incentive to replace pipeline imports with LNG, there are a range of political and energy strategy concerns that could  make more autonomy in the gas sector attractive for Germany. Shipping companies will likely need LNG as alternatives to the CO2-intensive fuel they use at the moment and the energy ministry says LNG will play a growing role in its efforts to reduce emissions in the freight industry. So far, only a few LNG service stations exist accross Europe and only two experimental stations in Germany before energy company Shell opened the first station open to the public in late 2018.

If Germany’s harbours want to remain internationally competitive, they will have to supply ships with LNG in the future, German business publication Handelsblatt wrote in 2018. In November 2018, Chancellor Angela Merkel said Germany would speed up plans for its first LNG import terminal.

So far, there are three major LNG terminal projects going through the planning process: Brunsbüttel near the North Sea, and competing locations in the cities of Wilhelmshaven and Stade. In Brunsbüttel, a consortium named LNG Terminal GmbH plans to build a regasification facility with a capacity of 8 billion cubic metres. The final investment decision for the Brunsbüttel terminal is expected in late 2019 and the German LNG port could be operational by 2022, the consortium says.

According to Germany’s governing SPD party, a new government strategy for fuel diversification will free additional funds to support the terminal’s construction in Brunsbüttel. However, Germany’s Federal Network Agency (BNetzA) in December 2018 said a planned pipeline connection from the port to the national gas grid could not be supported with public funds as it is not yet part of the national grid development strategy.

In August 2018, the German government said that new investment decisions for natural gas trade are “generally” left to private market actors, as has been its stance regarding the contentious pipeline project Nord Stream 2. However, energy minister Peter Altmaier announced a new regulatory approach in February 2019 that aims to make a connection from an LNG port to the German grid a priority. “There should no longer any regulatory difference whether foreign gas arrives in Germany by pipeline or, like LNG, by ship,” the energy ministry said.

At a conference in February 2018, economy minister Peter Altmaier said he was “optimistic” that “at least two” of the three domestic liquefied natural gas (LNG) import terminal projects currently being examined for northern Germany would be built.