Despite decreasing consumption of coal, Germany’s energy related year-on-year CO₂ emissions rose by 0.9 percent in 2016 due to an increased consumption of natural gas and mineral oil, according to first estimates by energy market research group AG Energiebilanzen (AGEB). Especially the higher consumption of diesel fuel (+4.5 percent) and the increased use of natural gas (+10 percent) for heating and electricity production helped to more than compensate lower emissions from a decrease in coal use and more renewables in Germany’s energy mix. The country’s total energy consumption rose by 1.6 percent to 13,427 petajoules in 2016 compared to 2015. This was due to colder weather, this year’s leap day, continued positive economic development and population growth, writes AGEB in a press release. 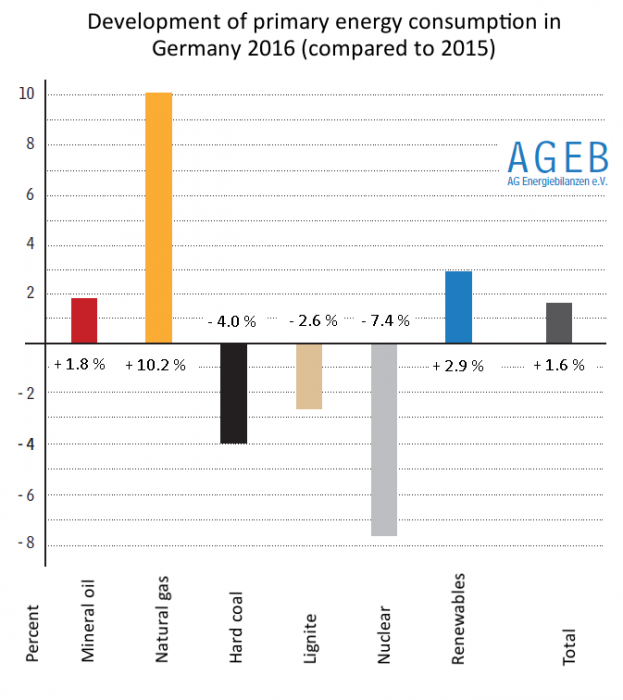 The Clean Energy Wire will publish an article on the AGEB estimates later today.

Because of comparably low winds in 2016, renewable power generation rose only slightly by 4.1 terawatt hours (TWh) compared to 2015, accounting for a share of 30 percent, according to preliminary figures by the German Association of Energy and Water Industries (BDEW). Offshore wind generation rose significantly by 57 percent (to 13 billion kilowatt hours), while onshore wind and solar PV decreased (-6 and -1 percent, respectively) compared to the previous year. Power generation from natural gas has also increased significantly by 16.5 TWh (a 12 percent share), while coal (-12.2 TWh to a 40 percent share) and nuclear energy (-6.9 TWh to a 13 percent share) decreased. “The decreased generation from coal and nuclear energy was therefore primarily balanced out by additional electricity production from natural gas. This shows clearly that natural gas is an indispensable part of the future energy system,” Stefan Kapferer, head of utilities lobby BDEW, said at a press conference in Berlin.
According to BDEW estimates, the share of renewables in power consumption will amount to 32 percent in 2016 compared to 31.5 percent in 2015.

The EU Commission today found this year’s Renewable Energy Act (EEG) reform to be in line with EU state aid rules. “The amendments to the German EEG law we approved today make sure that one of the largest renewable support schemes in the EU will be based on auctions,” said EU competition Commissioner Margrethe Vestager in a press release. The reform, finalised this summer, introduces auctions for renewables support, aims to reduce costs for consumers and limits renewables development. The Commission’s approval meant that the reform could take effect as planned from 1 January 2017, the federal economy ministry said in a press release.

For background read the CLEW dossier The reform of the Renewable Energy Act.

“Everyone in a different direction”

Germany and Belgium have signed an agreement on improving the exchange of information on nuclear security, the federal environment ministry announced in a press release. The neighbouring countries also instituted a nuclear commission that will meet at least once a year and agreed on mutual visits of nuclear power stations. Germany, Luxembourg and the Netherlands previously criticised Belgium over the safety of its nuclear reactors Doel 3 and Tihange 2, which are close to their borders and have seen a series of incidents in the past, Hendrik Kafsack writes in a separate article in Frankfurter Allgemeine Zeitung (FAZ). Belgium recently prolonged the reactors’ life span until 2025 in spite of international objections, leading Germany’s environment minister, Barbara Hendricks, to say that “this remains a national issue and there’s nothing we can do about it,” Kafsack writes.

For background on the German nuclear exit, read the CLEW dossier The challenges of Germany’s nuclear phase-out.

Contrary to expert opinion, Germany’s economy minister Sigmar Gabriel wants to retrieve nuclear waste from the former salt mine Asse II, located in the minister’s constituency of Wolfenbüttel, Daniel Wetzel writes in Die Welt. An expert commission found that retrieving the radioactive residues, a promise Gabriel made to his electorate, was potentially more harmful than leaving it in the ground, according to Wetzel. “The recommendation of the federal government’s chief advisory board on radiation protection creates a predicament for Gabriel,” he writes. Gabriel would either have to break the promise he made to his voters or insist on recovering the nuclear waste barrels, which would lead to “Germany not needing one, but two nuclear repositories,” thereby substantially extending search time and costs.

For more information on how Germany manages its nuclear legacy, read the CLEW factsheet Securing utility payments for the nuclear clean-up as well as the factsheet What to do with the nuclear waste – the storage question.

There is to date no sensible reason to buy an electric car, writes Markus Fasse in a commentary for Handelsblatt. “Even Daimler’s CEO, Dieter Zetsche, admits that,” Fasse writes, explaining that e-cars are too expensive, have a limited cruising range, lack a dense recharging network and take too long to reload. “Car drivers calculate unemotionally,” he says, adding that “the same goes for car producers” who currently still make a lot more money with conventional cars. Therefore, political pressure and regulations are needed to meet climate targets for the transport sector – “but explaining to customers why they should drive cars in the future that today can’t even be sold with subsidies” will also be a challenging task, Fasse writes.

For more information on the prospects of e-mobility in Germany, see the CLEW dossier The Energiewende and German carmakers.

Volkswagen, Germany’s largest car manufacturer, has agreed to a settlement of more than 2.1 billion Canadian dollars (1.5 billion euros) for manipulating emission tests, Frankfurter Allgemeine Zeitung (FAZ) reports. Together with its subsidiary Audi, VW agreed to repurchase 105,000 cars from Canadian customers and pay compensation, according to FAZ. Additionally, VW and Audi will be fined 15 million Canadian dollars. In the USA, VW awaits judgement in a similar lawsuit, although financial stakes are considerably higher.