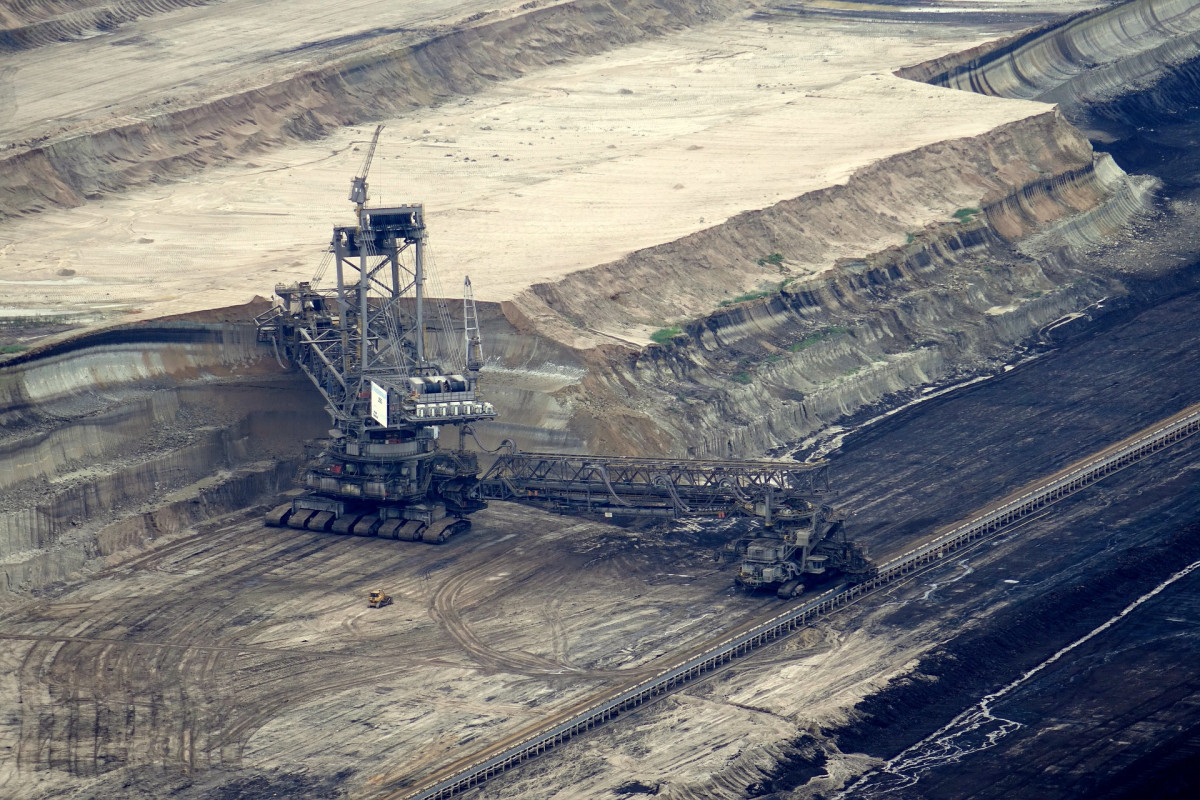 Stepping up the 2030 EU climate target to an emission reduction of at least 55 percent as proposed by the European Commission would very likely require the bloc to phase out coal almost entirely by that date, according to experts. The move, which is backed by current EU Council presidency Germany, would also have far-reaching consequences for Germany's coal exit plans, the experts told Clean Energy Wire. The country would have to effectively bring forward its phaseout of the climate-damaging fossil fuel, currently scheduled for 2038 at the latest. [UPDATE: Adds environment ministry statement in last three paragraphs]

The EU Commission proposal to step up climate ambitions and aim for an emissions cut of at least 55 percent by 2030 would imply that the bloc must almost entirely phase out coal by that date, experts say.

Therefore, this target would also imply that countries like Germany will likely have to pull forward current plans for exiting the emission-intensive fuel. Germany, which officially backed the more ambitious target this week, currently plans to phase out coal by 2038 at the latest.

In its proposal, the European Commission said that buildings and the electricity sector can make the largest and most cost-efficient contribution to reaching a 55 percent emissions cut.

Emissions from power plants are governed by the EU Emissions Trading System (ETS), which the Commission intends to strengthen significantly. This would cause prices for allowances to rise, making the most emissions-intensive fuel – coal – increasingly uncompetitive, as the Commission expects the renewables share in EU electricity production to at least double from today’s levels of 32 percent to around 65 percent or more.

In an analysis of the EU's Impact Assessment on raising the EU 2030 climate target, Belgian consultancy Climact and think tank Ecologic estimate that coal will only represent around two percent of the EU's power mix in 2030 in different scenarios.

Electricity from coal contributed 14.6 percent to the EU’s power mix in 2019. The biggest users are Germany and Poland, who jointly have around half of the bloc’s coal capacity installed and are responsible for around 50 percent of emissions from coal.

The EU Commission in its 2030 target plan said coal consumption would be reduced by more than 70% by 2030 compared to 2015, and oil and gas by more than 30% and 25%, respectively. Renewable energy instead would see its share increase.

Hanns Koenig from consultancy Aurora Energy Research called the calculations in the report by Ecologic and Climact "absolutely realistic." He pointed to Aurora calculations showing that even an EU emissions reduction of only 50 percent would result in a coal share of only 5 percent. 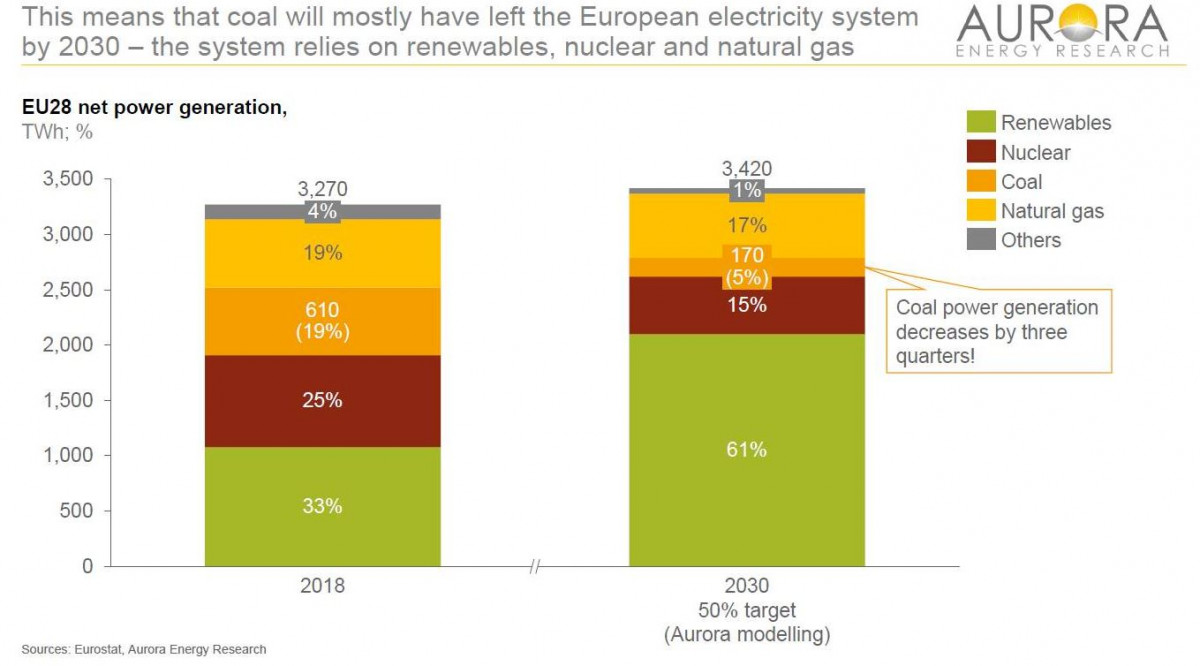 "If we go to 55 percent and the European Emissions Trading System (ETS) is adjusted accordingly, the coal exit will almost inevitably come much faster than previously planned, driven by the market," Koenig told Clean Energy Wire.

Electricity analyst Dave Jones from British climate think tank Ember agreed that the new EU target would imply a near total phase-out of coal power plants. "When the European Commission released their impact analysis of how to achieve 55%, one of their main model outputs is a near-complete phaseout of coal power by 2030," Jones said. "That's an implicit finding, rather than explicit - there's many ways to crack a nut and it's possible to hit 55% with a small coal tail, without a complete 2030 coal phaseout."

But Jones added that national energy and climate plans in Germany, Poland, the Czech Republic, Bulgaria and Romania contained far too much coal power to reach a 55% emission cut in 2030.

EU coal power generation already fell 24 percent in 2019, and was 47 percent below 2012 levels. Six countries in the EU are now coal-free and fourteen have pledged to become coal-free by 2030 or earlier. Coal power plants (lignite and hard coal summed) made up 31% of EU ETS emissions in 2019. 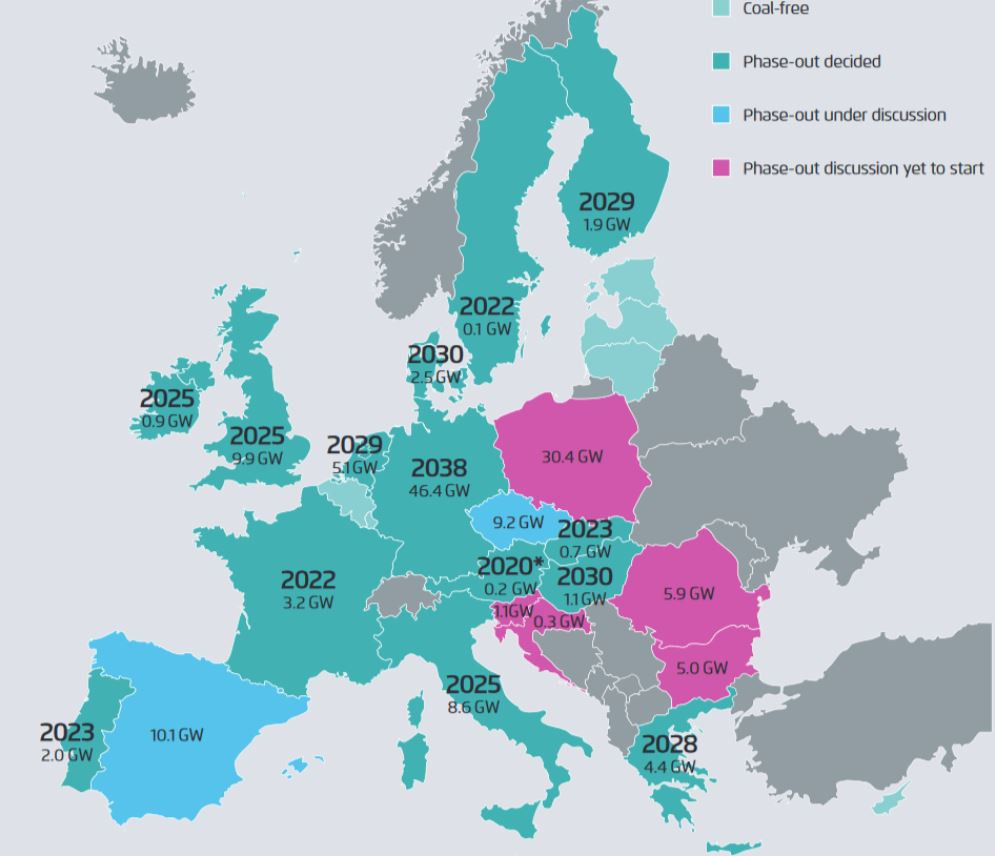 The analysts agreed that current plans for phasing out coal in Germany will likely be incompatible with the new target.

After a long and arduous debate, Germany agreed to a law that ends coal by 2038 at the latest. The law also said the exit could happen in 2035, conditions permitting.

"I would expect the last German coal-fired power plants to close in the early 2030s, and many will not be running much before then because so many more renewables will be built," Koenig said, adding that gas-fired power plants will very likely outcompete most coal plants in the market.

Given rising prices for emissions and strong renewable power generation, the use of coal power already decreased sharply in Germany this year. As a result, an increasing number of coal plants have become unprofitable, prompting utility Vattenfall to say it wanted to shut down its youngest and most efficient coal plant in Germany, which only started operating five years ago.

Ecologic analyst Katharina Umpfenbach, one of authors of the study cited above, said the exact impact of a new EU target on Germany's coal exit remained uncertain because Germany's coal exit law specifies a timetable for plant closures, but doesn't specify how much the plants will be used beforehand.

However, she said a more ambitious EU climate target will certainly mean that German coal plants will operate much less than currently assumed.

Umpfenbach pointed to an Aurora study commissioned by energy think tank Agora Energiewende* on the impacts of the coal exit on Germany's power sector estimating that 93 TWh of coal-fired electricity would still be generated in Germany in 2030.

"This is clearly incompatible with the result of the impact assessment," Umpfenbach told Clean Energy Wire, adding the EU's assessment corresponded to about 50 TWh of coal-based electricity in 2030 in the whole of Europe.

"Even if only a handful of countries in Europe will use coal by then, it is not conceivable that the remaining coal capacities will be exclusively in Germany," she said.

Because the EU's impact assessment model suggests the coal phase-out will be driven by a rising price in the EU emissions trading system, a formal adjustment of the German coal phase-out law will not be necessary, Umpfenbach said.

"Power plant operators could then, for economic reasons, withdraw their capacities from the market more quickly than provided for in the law, or use the plants only to a limited extent, at least as long as grid stability and security of supply are guaranteed," she explained.

But coal expert Philipp Litz from Agora Energiewende* said the next government might use provisions in the coal exit law that allow an earlier phase-out. "However the negotiations on the 2030 target come to an end, it seems pretty likely that the next German government needs to make use of the revision clauses in the coal phase out law," Litz said on Twitter.

Germany's environment ministry (BMU) said the impact of a new target on the country's phase-out plans remained uncertain given that the EU Commission's impact assessment didn't provide any analysis for individual member states. The ministry has not prepared any scenario calculations of its own, a spokesperson told Clean Energy Wire. "For this reason, no statement can be made about the concrete effects that an increase in the target at European level would have on the German coal phase-out."

"It should also be borne in mind that when the EU Commission presented the scenarios for raising the target, discussions had just begun at European level on how a new climate target should be designed, what proportion of the reduction should be undertaken by which sectors, and how the political instruments for implementation should be designed," the spokesperson added.

The pro-business Free Democratic Party’s (FDP) climate policy spokesperson Lukas Köhler told Clean Energy Wire a more ambitious target would "obviously" accelerate the coal exit via higher emission prices. He said it remained uncertain when exactly Germany will shut its last coal power plant, adding: "What is certain, however, is that this will be the case long before 2038."