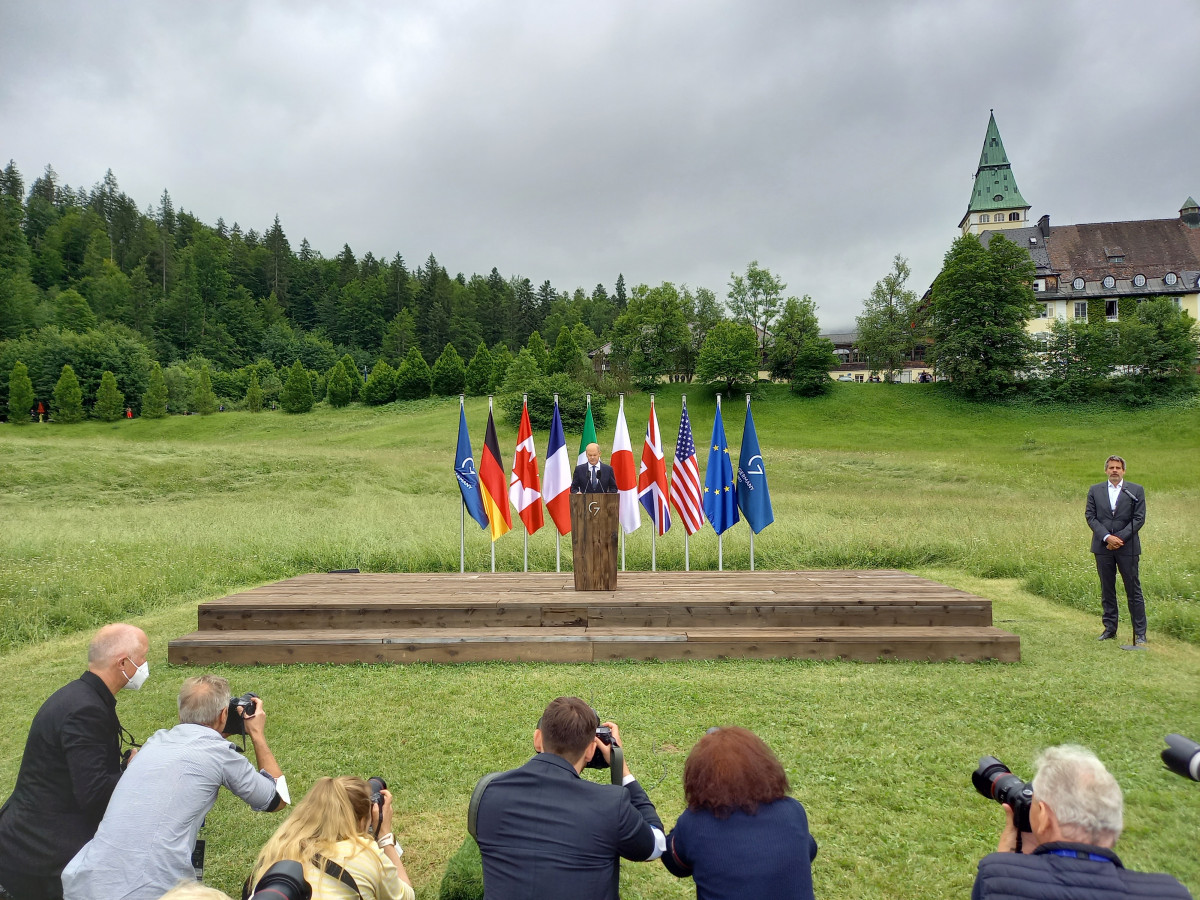 G7 leaders have finished their three-day meeting in the Bavarian Alps with a commitment to the Paris Climate Agreement, even as they agreed that public funding could be necessary for some fossil gas projects to reduce dependence on Russian energy. The summit agenda was dominated by Russia’s war against the Ukraine, which G7 leaders sought to counter by demonstrating strength and unity in the group of influential western economies. The leaders agreed to follow through on a key initiative by German chancellor Olaf Scholz and establish a climate club by the end of the year but were criticised for watering down language on electric vehicles and fossil fuels. Cooperation with developing and emerging countries played a vital role at the summit, with several planned ‘just energy transition partnerships’ to support their transition. [UPDATE adds info on climate club, import price caps, climate finance]

The Group of Seven (G7) western economies have reaffirmed their commitment to climate goals amid urgency to tackle the ongoing energy crisis excacerbated by Russia’s war against Ukraine. During their three-day summit in the Bavarian Alps, leaders agreed to establish a so-called climate club by the end of 2022 and support emerging and developing countries in their transition. But a commitment to ending public fossil fuel financing in third countries came with heavy caveats, leading to criticism from environmental NGOs.

“This was an important summit in a very special time,” said German Chancellor Olaf Scholz during his final press conference, adding that it had shown the unity of the G7 in its support of Ukraine.

Locked away from public scrutiny with scenic views of the Bavarian Alps, G7 leaders faced an especially challenging cocktail of interrelated crises, particularly regarding energy security, food supplies, climate action, the Covid-19 pandemic, and biodiversity loss. Many of these issues have been aggravated by Russia’s invasion of Ukraine – the one crisis that dominated the talks Russia had been a party to until its annexation of Crimea in 2014 and encouraged the G7 to appear strengthened and unified at the summit organised under the aegis of the current German presidency.

While taking immediate action to secure energy supply and stop the increases in energy prices driven by extraordinary market conditions, we will not compromise our climate and biodiversity goals including the energy transition.

Germany had aimed high on climate in the run up to the Elmau summit, promising to make it the top priority during its G7 presidency, but the start of Russia's invasion of Ukraine in February threw plans off course.

The leaders’ final communiqué indeed put climate and energy front and centre, starting off with a section entitled “A Sustainable Planet”. Leaders reaffirmed their “unwavering” commitment to the Paris Agreement, and said they aimed to keep a limit of 1.5°C temperature rise within reach – sticking to climate targets despite the escalating energy supply crisis expected especially for European G7 members.

“While taking immediate action to secure energy supply and stop the increases in energy prices driven by extraordinary market conditions, we will not compromise our climate and biodiversity goals including the energy transition,” they stated, adding a commitment to overcome the dependency on Russian energy imports.

Scholz had pushed to make public funding of foreign gas projects possible, despite an agreement to the contrary signed at last year’s COP26. The final text now opens the door to such support but sets some limitations, which observers say are in line with 2021’s COP pledge.

“The decision to end financing for fossil fuels stands,” said Scholz. “However, of course we will help countries now in the current situation if they want to make investments into their energy supply, for example if they are hydrogen-ready – all as long as they are in line with the 1.5°C [global warming limit] target of the Paris Agreement.” Scholz emphasised that natural gas cannot be a long-term solution and especially not for Germany, which aims to become climate neutral by 2045. However, “gas is needed for a transitional period and that is why there may be investments that make sense in this phase and need to be supported”, the chancellor said.

The final communiqué reads that public support in the gas sector can be “appropriate” in “exceptional circumstances […] if implemented in a manner consistent with our climate objectives and without creating lock-in effects”.

For civil society observers, this is the key reason for a rather weak climate outcome of the summit. “It is disappointing that the G7 summit failed to send out the signal of a new beginning in climate policy that would have been possible,” Christoph Bals, policy director of Germanwatch told Clean Energy Wire. Scholz’s push for gas financing, however, had meant that “climate policy damage control” now stood at the centre.

Johannes Schroeten, policy advisor at think tank E3G, said the G7 wasted a “golden opportunity” to speed up the end of fossil fuel public finance. “Chancellor Scholz’s attempt to carve out large exemptions from the COP26 ‘statement on international public support for the clean energy transition’ has been averted – but only just,” he said. “The integrity of the policy stands, but we need urgent clarification of timelines and investment criteria, beyond the empty notion of hydrogen-readiness.”

Greenpeace Germany executive director Martin Kaiser saw a lack of ambitious climate agreements. “Scholz has failed to initiate the turning point for climate protection in Elmau and there is a lack of clear resolutions to phase out coal and a phase-out date for combustion cars by 2030 and for gas by 2035.”

G7 to establish climate club by the end of 2022

The G7 unveiled plans to establish a climate club by the end of this year, where members would agree on joint rules and standards in the fight against global warming. The club would “support the effective implementation of the Paris Agreement by accelerating climate action and increasing ambition, with a particular focus on the industry sector, thereby addressing risks of carbon leakage for emission intensive goods, while complying with international rules”, said a separate document.

This was a significant win for Chancellor Scholz, who has been advocating for such a club for some time.

A climate club was necessary, because not enough is done, yet, the G7 argued. “We note with concern that currently neither global climate ambition nor implementation are sufficient to achieve the goals of the Paris Agreement,” they said in the document.

The club would be built on three pillars: climate mitigation by working towards a common understanding of how different measures can be made comparable, industry decarbonisation, and boosting international ambition through partnerships and cooperation. The climate club would be cooperative and open to countries which are committed to speeding up action to increase the Paris Agreement.

Observers criticised that the proposal still lacked details. “The climate club must be fleshed out with concrete goals and measures,” said Dennis Snower, head of the Global Solutions Initiative.

Mats Engström, visiting fellow at the European Council on Foreign Relations (ECFR) said the statement on the club is “a significant step but much remains to be done, including making sure that it is really inclusive.”

Marian Feist, researcher at the German Institute for International and Security Affairs (SWP), said that establishing a club by the end of the year was an “optimistic time frame, given the lack of substance.”

German chemical industry group VCI called the initative to form a climate club "a good thing" that was met with internatinal support. The industry group therefore urged the EU to "shelve its plan to unilaterally introduce border adjustment measures for climate protection and give absolute priority to the climate club."

The G7 launched a $600 billion “Partnership for Global Infrastructure and Investment” for sustainable infrastructure projects in low and mid-income countries – seen as a response to China’s so-called Belt and Road Initiative.

In addition, the German presidency had invited several developing countries and emerging economies that are also members of the wider G20 club of influential economies to attend the summit. Following a joint session with the heads of state and government from Indonesia, India, South Africa, Argentina and Senegal, the current chair of the African Union, the G7 leaders said in a document that they commit to join forces to accelerate the transition to climate neutrality.

As part of these efforts, the G7 decided to set up more of the so-called ‘just energy transition partnerships’ (JETP), the first of which was announced at last year’s COP26 with South Africa. These partnerships aim to move forward the transition through financial as well as technical support and capacity building. However, negotiations with Indonesia, India, Senegal and Vietnam are far from finalised and it will likely take months until new JETPs are announced.

NGO Germanwatch’s Bals welcomed the document by the G7 and the partner countries, but said it was “obviously just a starting point”. Bals called it “unfortunate” that the leaders only agreed to “phase down” coal use, not end it entirely.

Leaders said they will consider the “feasibility” of temporary price caps on imports of energy from Russia to prevent Moscow profiting from the war against Ukraine and its fallout, which had seen oil, gas and coal prices rise over recent months.

The idea behind the cap is to tie financial services, insurance and the shipping of oil cargoes to a price ceiling, reported Reuters. A shipper or an importer could only get these if they committed to a set maximum price for Russian oil.

Analyst Luca Bergamaschi of Italian think tank ECCO called the debate on price caps a distraction. “Devoting a lot of political attention to unclear and likely ineffective or counter-productive "price caps" is a massive waste of time, instead of addressing the demand side to cut costs of consumers and the finance to Putin,” he said in a message on Twitter. In his view, the G7 should focus on energy savings, energy efficiency, renewables and maximising existing infrastructure.

Some had seen the German G7 summit as an important stepping stone in the 2022 global climate agenda on the way to COP27 in Egypt later this year. NGOs like Oxfam had called on the G7 to finally increase climate finance. It is seen as a crucial way to gain support from developing countries for ambitious climate action.

The G7 now said they would intensify efforts to finally make good on their promise to support developing countries with 100 billion dollars in climate finance annually. In addition, they said they would scale up climate and disaster risk finance and insurance and work towards a “Global Shield” against climate risks, with progress to be made by the start of COP27.

ECFR’s Engström said Germany had pushed an ambitious climate agenda for the G7 Summit, “but the outcome is not sufficient to bridge the trust gap with the Global South.” The G7 would have to actually deliver on their climate finance promise. “Otherwise the momentum from the Glasgow conference last year might be lost.”

Ella Kokotsis from the G7 Research Group called it "disappointing" that the G7 only reaffirmed their plan to deliver on the 100 billion “as soon as possible”.

"Expectations ran high that Elmau would finally deliver on this long-overdue commitment," she said.