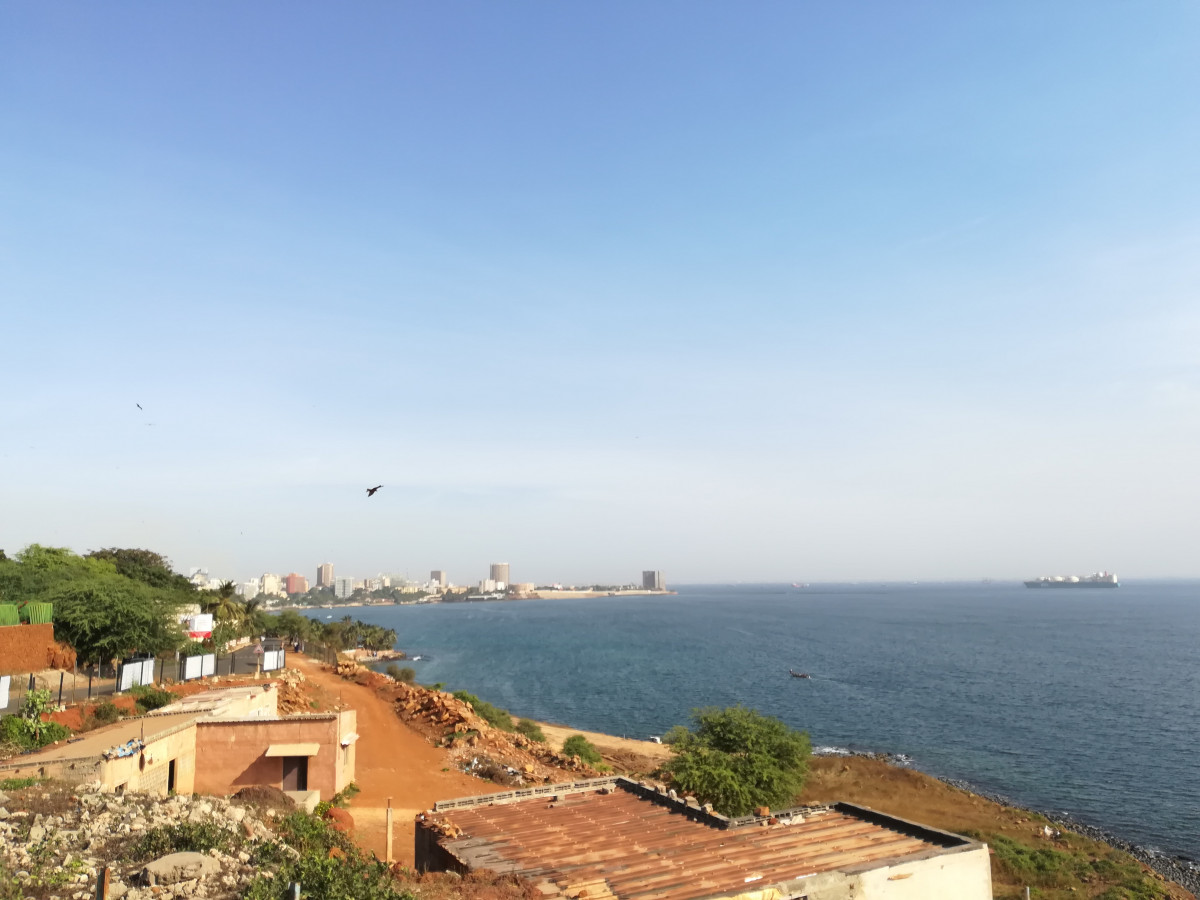 Until now, much of Senegal's energy is supplied through imported LNG. The country aims to export the fuel in the future. Photo: CLEW/Wettengel.

Germany could support Senegal in efforts to exploit fossil gas resources off its coast, chancellor Olaf Scholz said during a visit to the western African country. As Germany seeks alternatives to Russian fossil fuel imports, Scholz said the two countries' governments had begun “intensive” talks on cooperation on gas extraction and LNG production. However, think tanks and NGOs say such cooperation would contradict a pledge Germany signed at last year’s UN climate conference, whose signatories vowed to end foreign fossil fuel support by the end of 2022. A climate and economy ministry spokesperson told Clean Energy Wire that Germany stands by the pledge and would implement it. Under the umbrella of Germany’s G7 presidency this year, the group of industrialised democracies could establish a special “climate partnership” with Senegal, said Scholz. [Update adds govt spokesperson statement that cooperation with Senegal is in line with agreements made]

German plans to support the western African country Senegal in its efforts to extract and sell natural gas to partners like the EU has come under fire by think tanks and NGOs, as they could contradict a pledge to end foreign fossil fuel support by the end of this year.

Germany aims to cooperate with Senegal not only on renewables, but also on “[liquefied natural gas] LNG questions and gas extraction”, said chancellor Olaf Scholz during a press conference in Dakar. "It is a matter worth pursuing intensively [and] it is our joint interest to make progress on this."

Scholz said this would also include the technical investments in the necessary power plant infrastructure. Senegal is the first stop on the chancellor’s three-country trip to Africa, which continues with Niger and ends in South Africa.

Senegalese president Macky Sall has been pushing the EU for months to support Africa in its pursuits to use natural gas resources on the continent, hailing it as a cleaner alternative to coal. The president had criticised an agreement made at last year's UN climate conference COP26, which said several countries would end their support for fossil fuel projects in other countries by the end of this year.

“I asked chancellor Scholz to assist us in supporting the export of gas and LNG resources to Europe and that we can use this gas for our power plants to reduce our emissions,” said Sall in Dakar. “We in Senegal are interested in supplying the European market with gas.” Senegal aims to explore a gas field off its coast, together with neighbouring Mauretania. The gas project is being led by BP, and the first volumes are not expected before next year, reported Associated Press.

Germany aims to become climate-neutral by 2045 and will therefore phase out fossil gas over the coming decades. However, the government has said it wants to use gas as a bridging fuel for the energy transition to complement renewables. However, Russia’s war against Ukraine and the ensuing turmoil on fossil fuel trading with Europe has presented a major setback to the role of natural gas in Germany's energy policy plans.

The government has hastened to end Germany's dependence on Russian gas and aims to bring its share down to 10 percent of the country’s needs by 2024 and already concluded formal agreements with alternative suppliers such as Qatar. An embargo by the EU or a halt of supplies by Russia could tighten the already difficult situation even more.

Cooperation on fossil gas not in line with COP26 statement to end fossil fuel support, say think tanks and NGOs

Germany has been among several countries to sign the COP26 statement on clean energy, committing itself to ending public support for foreign fossil fuel projects by the end of 2022. The pledge prohibits support “except in limited and clearly defined circumstances that are consistent with a 1.5°C warming limit and the goals of the Paris Agreement.”

Germany’s signing of the agreement was hailed as a “game changer” at the time.

“Scholz's announcement contradicts the statement from the COP,” said Brick Medak, head of Berlin office of think tank E3G. While the text foresaw a “loophole” of clearly defined circumstances, this is not covered by the talks with Senegal, he argued. “Given the numerous talks between the German government and many countries, especially on LNG, there is no longer any question of limited circumstances,” Medak told Clean Energy Wire.

He welcomed closer energy cooperation between Germany and the EU and African countries. “However, it is problematic that this is to be done primarily as part of the "buying frenzy" for LNG. This created the impression that the German government wants to buy “any amount of LNG without taking sufficient account," for example, of the human rights situation in countries like Qatar, Medak said. "This also applies to some countries in Africa,” he added.

A government spokesperson told Clean Energy Wire that government remains committed to the 1.5 degree climate target. "Energy cooperation with Senegal is in line with all agreements reached."

NGO Germanwatch said that supporting Senegal’s gas endeavours would “not be compatible with the Glasgow statement.” The projects would not be in line with the 1.5°C limit, the organisation told Clean Energy Wire. “Even if natural gas causes fewer CO2 emissions, it is still a fossil fuel, and if the methane gas that escapes from the pipelines during extraction and transport, for example, is taken into account, it is by no means climate-friendly,” policy advisor Kerstin Opfer said. Germanwatch added that the expansion of gas production risks exacerbating Africa's uneven development if fossil fuel extraction becomes stranded assets.

Meanwhile, the economy, climate and energy ministry also does not see the COP deal violated. “For us, the decisions of the COP stand, and we implement them,” a spokesperson told Clean Energy Wire, without providing details on the talks with Senegal. Limiting the global temperature rise to 1.5°C would also be part of the discussions at this week’s meeting of G7 climate and energy ministers in Berlin, the spokesperson added.

Climate policy researcher Niklas Höhne also criticised the gas plans by Senegal and Germany. “Building new gas infrastructure in Senegal now would be fatal for the climate,” he wrote on Twitter. It would be better to support Senegal more on renewables, he added.

Asked whether the decision to pull out of financing gas fields in Africa was perhaps too hasty and could put the brakes on development opportunities on the continent, Scholz said the “turn of an era" brought on by Russia’s war against Ukraine meant that “a new look” at the world had to be taken. “We cannot accept that some countries in the world that do not have the economic power are kept from using their opportunities," Scholz said. Therefore, it was important to look at things “without prejudice," he added. 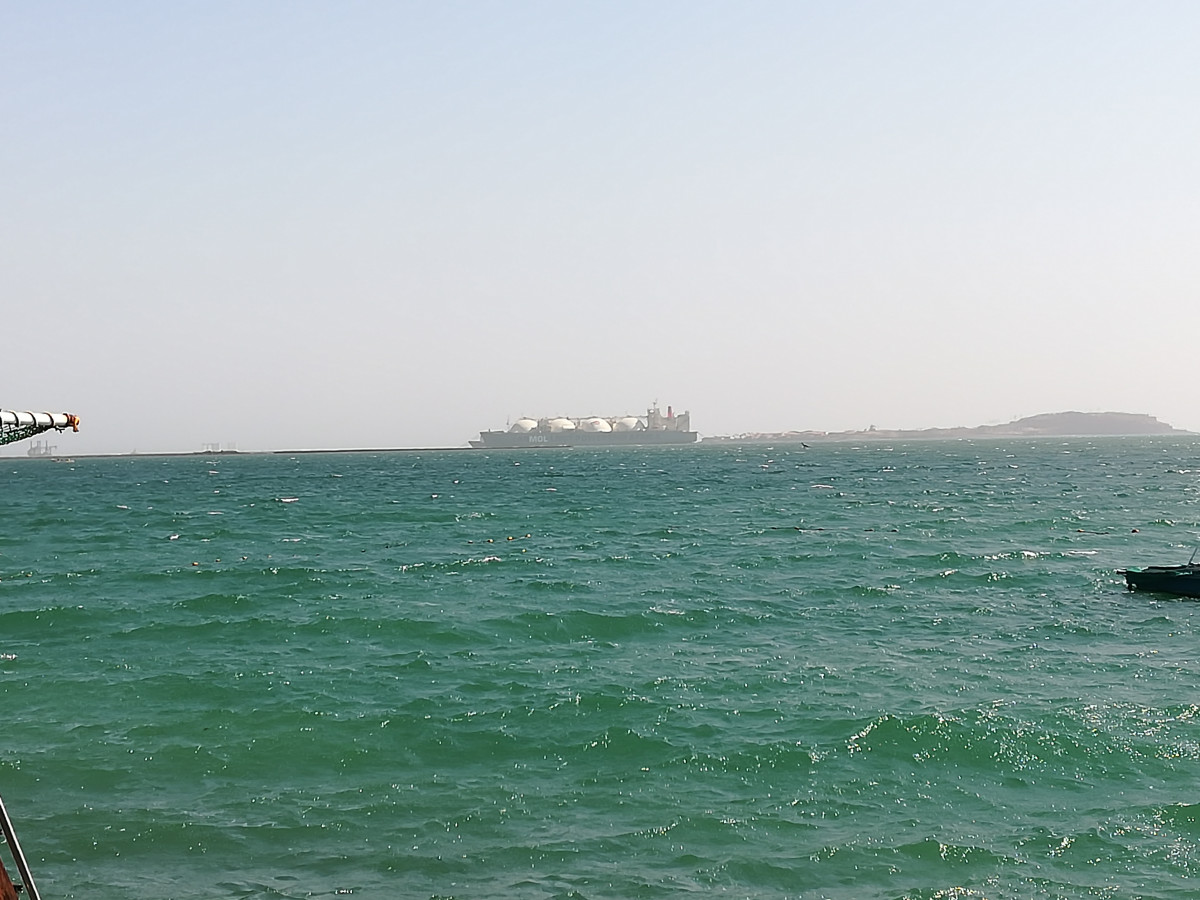 LNG ship off the coast of Senegal in Dakar. Photo: CLEW/Wettengel.

It looks increasingly likely that Senegal will be part of a group of countries with which the Group of Seven (G7) leading industrialised democracies will set up a special partnership during Germany’s G7 presidency this year. The cooperation could be modelled on the ‘just energy transition partnership’ several G-7 countries, including Germany and the United States, had announced with South Africa a at last year’s COP to help the country wean itself off heavily polluting coal.

Scholz’s government wants to use this year’s G7 presidency to improve coordination of global efforts to combat climate change, also by setting up special climate, energy or just transition partnerships with emerging and developing countries. However, it is to date unclear which countries will ultimately participate, but in addition to Senegal, India and Indonesia appear to be likely candidates. The two nations' leaders have been invited to attend the G7 summit in Bavaria at the end of June.

Besides fossil gas, Germany would also cooperate with Senegal on renewable energy, said Scholz in Dakar. “As the G7, we will continue to support Senegal [with climate-friendly energy supply], of course perhaps also within the framework of a climate partnership.”

President Sall welcomed future cooperation on clean energies. “Of course we think about green hydrogen [cooperation] between German and Senegalese companies,” he said.