Cars Climate & CO2
German carmakers VW, Daimler and BMW – under pressure to act after the diesel emissions scandal – pledged to install emissions control software updates in about 5 million diesel passenger cars, offer buyer’s premiums for customers switching away from an old diesel, and bear half the cost of a 500-million-euro fund for city mobility concepts. The summit of industry leaders, federal ministers and heads of several federal states in Berlin was aimed at finding ways to cut harmful emissions and prevent inner city driving bans. Politicians stopped short of forcing more costly engine alterations on manufacturers. Environmentalists said the agreement would fail to deliver the emissions cuts needed, and vowed to press ahead with lawsuits to force through driving bans in cities.

Environmental group DUH announced they would continue with their lawsuits in 16 German cities and push for an enforcement of driving bans in the cities where they were already decided. “Once more the German car industry has won impressively against the federal and state governments,” DUH-head Jürgen Resch said in a statement. [More reactions in this article.]

But environment minister Barbara Hendricks said at a press conference after the summit: “Today’s summit’s outcome is a first step to lower nitrogen oxide (NOx) pollution in inner cities. We won’t completely solve the problem with software updates, but it contributes to lowering pollution.” Further measures such as engine hardware alterations for certain diesel cars could be needed in the future, the minister said.

With the summit, carmakers and the government aimed to circumvent the need to eventually introduce inner city driving bans for diesel cars, following a recent court ruling in Stuttgart that cleared the way for such bans.

The emissions scandal and the need to decarbonise transport in order to reach climate targets have raised serious questions about the future of diesel technology - the “boon and bane” for German carmakers. The current crisis weighs heavily on the symbolic car brands ‘Made in Germany’. But the government also wants to safeguard the economic strength of a sector whose 1,300 companies employ more than 800,000 people, and which creates the basis for some of Germany’s wealthiest regions.

These are the main points of agreement:

Carmakers offer to voluntarily install software updates in a total of about 5 million passenger cars, with the goal to reduce average nitrogen oxide (NOx) emissions by 25-30 percent, wrote German Association of the Automotive Industry (VDA) in a statement. This included 2.5 million Volkswagen cars which are currently already being recalled, said VDA.

The software updates would cost VW, Daimler and BMW a total of about 500 million euros, said VDA head Matthias Wissmann.

The federal government will monitor the effectiveness of the updates, also by way of real life emissions tests.

Carmakers did not agree to hardware updates.

VW, Daimler and BMW will each introduce a programme to accelerate the move away from old diesel cars (euro 4 standard and below), including a buyer’s bonus for the purchase of new car in exchange for an old diesel.

BMW, for instance, announced in a press release that it would grant owners of cars that meet euro-4 standards or less a bonus of up to 2,000 euros when they trade in their car and buy a new electric, hybrid or modern diesel BMW.

The cost for this diesel fleet overhaul would be “considerably higher” than the 500 million euros for the software updates, said VDA’s Wissmann.

The federal government will pay 250 million euros into a fund to finance sustainable mobility in German cities. Carmakers pledged to meet this amount and will contribute based on the individual company’s market share.

The fund will be used to support the transition to low-emission transport, for example by retrofitting buses and taxis, investing in infrastructure and public transport, and promoting the use of the digitalisation to make traffic more fluid, said transport minister Alexander Dobrindt.

Clearing this issue off the table before the election

Almost two years after Volkswagen emissions allegations surfaced in 2015, recent cartel allegations had shed a new light on the meeting’s prospects, and turned the question of future mobility into an issue for the federal election campaign. Apart from its implications for citizens’ health, the emissions scandal and the ensuing debate about the future of the combustion engine pose serious questions for the drafters of the country’s climate and energy policy.

“This [summit] is about clearing this issue off the table before the election,” Ferdinand Dudenhöffer, director of the Center Automotive Research at the University of Duisburg-Essen, told Politico in the run-up to the summit. “The meeting is a campaign platform for politicians to reassure voters they don’t need to fear any driving bans.”

Protests ahead of the summit

Ahead of the summit, Greenpeace activists had climbed the roof of the planned venue, the transport ministry, and hung a banner with the slogan “Welcome to Fort NOx”, referencing the abbreviation of nitrogen oxides, one of the key pollutants in the Volkswagen emissions scandal. 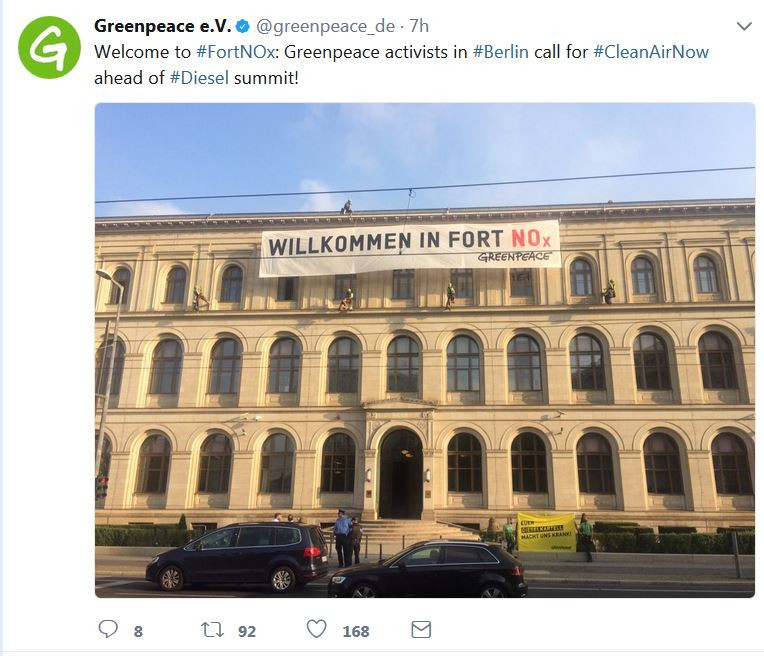