Coal Climate & CO2
Germany's primary energy consumption is likely to remain broadly unchanged this year, according to estimates by energy market research group AG Energiebilanzen (AGEB). While data for the first nine months of the year indicate a rise in diesel, natural gas, and renewables, there was a marked drop in the use of coal and nuclear. But the effect on Germany's CO2 emissions this year remains unclear, according to experts.

Germany consumed 9,815 petajoules between January and September 2016 - 0.3 percent more than in the same period last year. The researchers forecast that primary energy use will reach 13,350 petajoules by year's end.

“The slight increase mainly results from this year’s leap day, economic growth and population growth [due to immigration],” AGEB said, adding that the mild weather and improvements in energy efficiency slowed the rise.

Germany's energy consumption is crucial to determining this year's level of CO2 emissions. The country of the Energiewende has made great strides in increasing the share of renewables in power generation, but CO2 emissions have remained stubbornly high, making it increasingly unlikely Germany will reach its target of cutting emissions 40 percent by 2020 compared to 1990 levels. The environment ministry said last month that the targets can only be met in a best-case scenario.

“We have clearly decreasing emissions in the electricity sector, but because of once again rising emissions in the transport sector, the overall balance is unclear,” said Patrick Graichen, head of energy think tank Agora Energiewende*, pointing to the sharp increase in the use of diesel.

Greenpeace energy expert Tobias Austrup said the data did not indicate a trend reversal in emissions, but cautioned the figures were "just a snapshot": “Until now, I don’t see a breakthrough in systematically lowering emissions."

Austrup lamented the data revealed Germany had made scant progress on energy efficiency. "It is the ‘sleeping giant’ of the Energiewende. Until now, it has been a topic for political sermons, but has not found its way into robust policy."

Gas and renewables up, coal and nuclear down 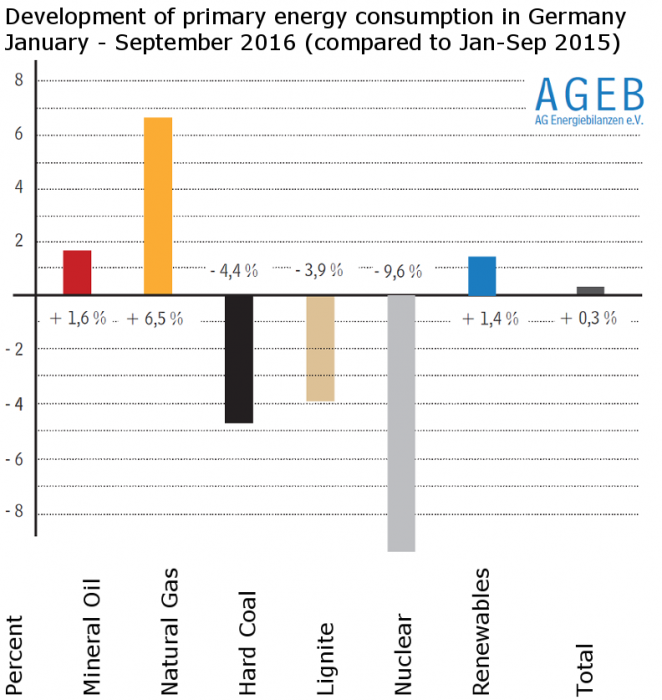 Consumption of nuclear energy fell 9.6 percent compared to the first nine months of 2015, which was due to several planned outings, and because the nuclear power station Grafenrheinfeld went offline in June 2015.

Oil consumption rose 1.6 percent in the first nine months of the year, mainly because the use of diesel fuel rose 6 percent. "The increase in diesel consumption is remarkably high," Alexander von Gersdorff, spokesperson of the German Petroleum Industry Association (MWV), told Clean Energy Wire. "This is due to a strong economic growth which in turn led to an increase in goods transportation as well as more deliveries in the service sector."

Hard coal use dropped 4.4 percent, while lignite use decreased 3.9 percent. “It comes as a surprise that coal consumption drops significantly while natural gas is on the rise," Graichen said. "In the past, coal had almost completely ousted natural gas for electricity generation. Yet, with the low market price for gas – which no one saw coming – it seems that the trend is not only stopped, but begins to be reversed.”

"Lignite will continue to be used for power generation. This year’s market-related effects will not be enough for Germany to reach its climate targets. But they show that not a whole lot of political effort is needed as lignite becomes less and less economically viable,” according to Graichen.

German utility STEAG announced the decommissioning of five coal-fired generating units due to a low wholesale electricity price, according to a Handelsblatt Online report.

“The AG Energiebilanzen expects that the shares of energy consumption of the first nine months will broadly correspond to the values of the entire year,” AGEB said.