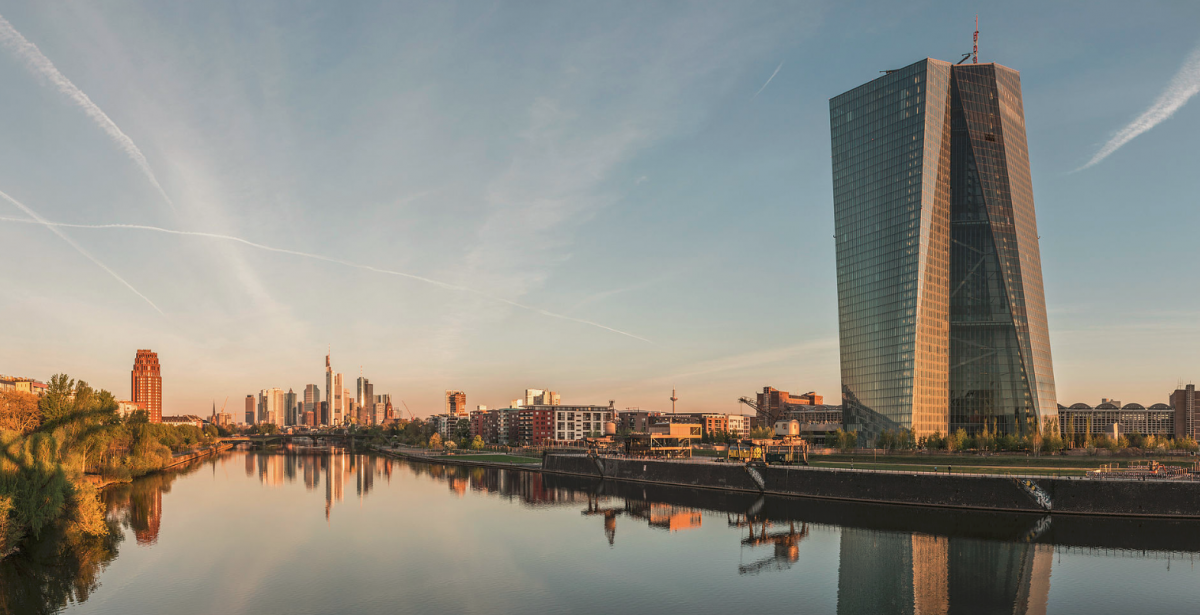 A committee formed in 2019 to assist Germany in making its financial sector more sustainable and aligning it with energy transition activities and international climate targets has released its final report with recommendations for the government. The committee calls for a "great transformation" of the entire finance sector that includes public and private actors, and lays the financial groundwork for achieving a climate neutral economy. Observers generally lauded the compromise of several diverse interest groups in the committee, saying it goes well beyond EU activities and could help make the government's own forthcoming sustainable finance strategy a real success. However, civil society groups lamented that financial industry lobbyism still watered down the outcome and urged the government to keep up its guard if it does not wish Germany to fall behind as a sustainable finance location.

The German government's Sustainable Finance Committee (SFC) has released its final report on the country's prospects for becoming a leading location for the green finance industry. The report, titled "Shifting the trillions – a sustainable finance system for the great transformation", lists 31 measures to better steer public and private investments towards environmentally-friendly activities, which is seen as prerequisite for achieving a climate neutral economy. "It's called the 'great transformation' for a reason," SFC head Karsten Löffler said at a press event. Up to one trillion euros would be needed across Europe by 2030 for achieving the bloc's emissions reduction targets and other goals formulated in its Green Deal, Löffler argued. As public coffers could not raise nearly enough of that sum, aligning private investments with the targets would be vital, Löffler said. "And the report recommends a systemic and comprehensive way to achieve that," he added.

The recommendations cover the five areas of policy framework, reporting and risk management, research and teaching standards, financial products, and institutional "perpetuation" to accompany the transformation. Among the most important measures identified are company reporting and "informational infrastructure", which the committee says should get priority in implementation. The orientation of public bond issuing towards green criteria and public investments more broadly had also been identified as key levers which should quickly be consolidated, it added.

The SFC said the government should urgently incorporate as much as possible of the recommendations into its own sustainable finance strategy, expected in the first half of 2021. A state secretary committee in early 2019 had decided to summon the SFC in a bid to make Germany improve the country’s lacklustre standing in the green and sustainable finance industry. Lawmakers in Germany were put under pressure by other countries pushing ahead with the integration of the sustainable ESG (environmental, social and governance) criteria in financial operations and the emergence of a sustainable finance taxonomy, which classifies investments according to their ESG compliance and fully enters into force in 2022.

The government said in the introduction to the report it would "carefully examine" the committee's recommendations and incorporate them in its own sustainable finance strategy where applicable.

But the SFC's recommendations go far beyond the scope of the EU's taxonomy, finance researcher Kerstin Lopatta of University of Hamburg, told Clean Energy Wire. Lopatta had followed the committee's sessions as an observer and is part of the Sustainable Finance Research Platform, a cooperation between five research institutions co-funded by the government. The committee's report "covers the whole spectrum of sustainable finance, whereas the taxonomy merely is based on six environmental targets”, she argued, adding the report could be seen as a blueprint for forthcoming EU regulation.

Lopatta said the report had accommodated reservations by the finance industry and companies by allowing for a flexible introduction of new rules. Further details could still be negotiated in in due course. Small and medium-sized enterprises (SMEs), which make up the bulk of Germany's famed "Mittelstand", have already complained that a slew of new regulation -  such as carbon pricing, a new supply chain law and the EU's forthcoming green finance regulation - could overstretch their capacities. The finance researcher said SMEs and others clearly needed support to comply with the often complex new rules. "But if we want to meet the UN's sustainable development goals, the Paris Agreement and the Green Deal's ambitions, we cannot leave this part of the economy out."

On balance, the SFC had managed to contain a lot of potential conflicts between the finance industry, the state and civil society by engaging representatives of either side early on. "For me, a common idea to initiate needed change prevailed among everyone involved," she said.

"A first point of orientation for investors"

The SFC report stated that the committee's leading idea had been to "unite all market forces for an effective allocation of capital and combine them with solid risk management." It argued that efforts to anchor sustainability in the financial system in the long run could not be limited to Germany but had to be embedded in European and other international activities to take full effect. "Now is the time to prepare the successful transformation of Germany to become a leading sustainable finance location."

Committee member Silke Stremlau, who sits on the board of pension fund management association Hannoversche Kassen, stressed that the SFC report would provide the government as well as the private sector with a framework that so far did not exist, arguing that it had been kept lean but still precise enough to help channel public and private investments in the desired direction. "It's a first point of orientation for investors," she said.

Stremlau pointed out that the idea was not to make life harder for companies. "The main reason is that we need money for the sustainable transformation – and this is why funds need to be redirected." But a wave of change would be imminent either way in terms of financing conditions for companies, she argued. "More and more people start asking where their products come from and companies who embrace this change have the best chance to thrive also in the future," she said, adding that an acceptable cost-return ratio for businesses had been a guiding principle throughout the committee's negotiations. She said the SFC expected companies to take their responsibilities regarding international climate targets seriously, and that the state would have to act as a role model by getting its own credit and investment decisions in order. "We have to be quick but also need a lot of stamina because this is going to take time," she concluded. 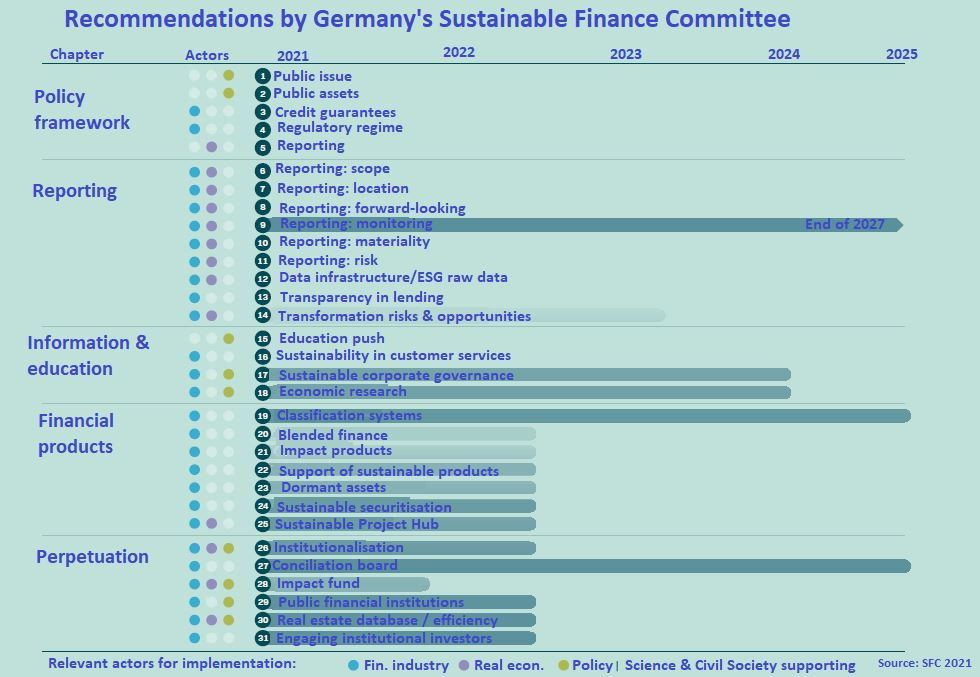 The over 30 recommendations focus on actions that need to be taken by 2025. Source: SFC

Michael Schmidt, who represented the asset manager Lloyd Fonds in the committee, said the most important aspect from the financial industry's perspective to achieve a sustainability transformation, would be "high-quality and comparable data”. The SFC, therefore, had recommended to expand reporting duties - which already exist for large and listed companies -  to also include smaller ones. "Sustainable thinking has to become part of everyday business in the financial industry," Schmidt said, stressing that the report had been tailored to suit the interests of Germany's economy that is centred on strong SMEs, industrial products and export markets.

The NGO Germanwatch, whose head Christoph Bals is part of the committee, generally welcomed the final report, saying it represents "a mostly ambitious but also realistic set of recommendations" that could do a lot to get sustainable finance fully off the ground. "The government should initiate its implementation before the election. The rest of it should be put into the next coalition agreement," the NGO said, warning simultaneous developments in the USA or China compelled Germany to consolidate its position. Bals stressed the government's role in establishing accepted standards. "Public money must not flow into greenwashing activities," Bals said. A "forward-looking" reporting in the finance industry and other sectors would be part of a "golden triangle" for transformation that is completed by rigorous climate targets and progressive carbon pricing, he said. Germanwatch criticised the report had largely circumvented new rules for insurance companies. "This is one of the open tasks that need to be addressed soon," Bals said.

Gerhard Schick of NGO Bürgerbewegung Finanzwende, who also sat in the SFC, pointed out that Germany's widespread public bank network of Sparkassen should be at the forefront of any regulatory changes, as these accompany companies who have to implement sustainable activities on the ground. "It's inacceptable that many Sparkassen still don't have a strategy regarding the management of their climate risks," Schick said.

While he too lauded the SFC's achievement to present a first and important impulse for the industry, Schick criticised lobby groups of the financial industry for using their influence to water down the committee's final report. "Interest groups officially had only observer status, but thanks to their huge resources were able to massively throttle down the endeavour," he said, cautioning that the government should take this as a warning when drafting its strategy.