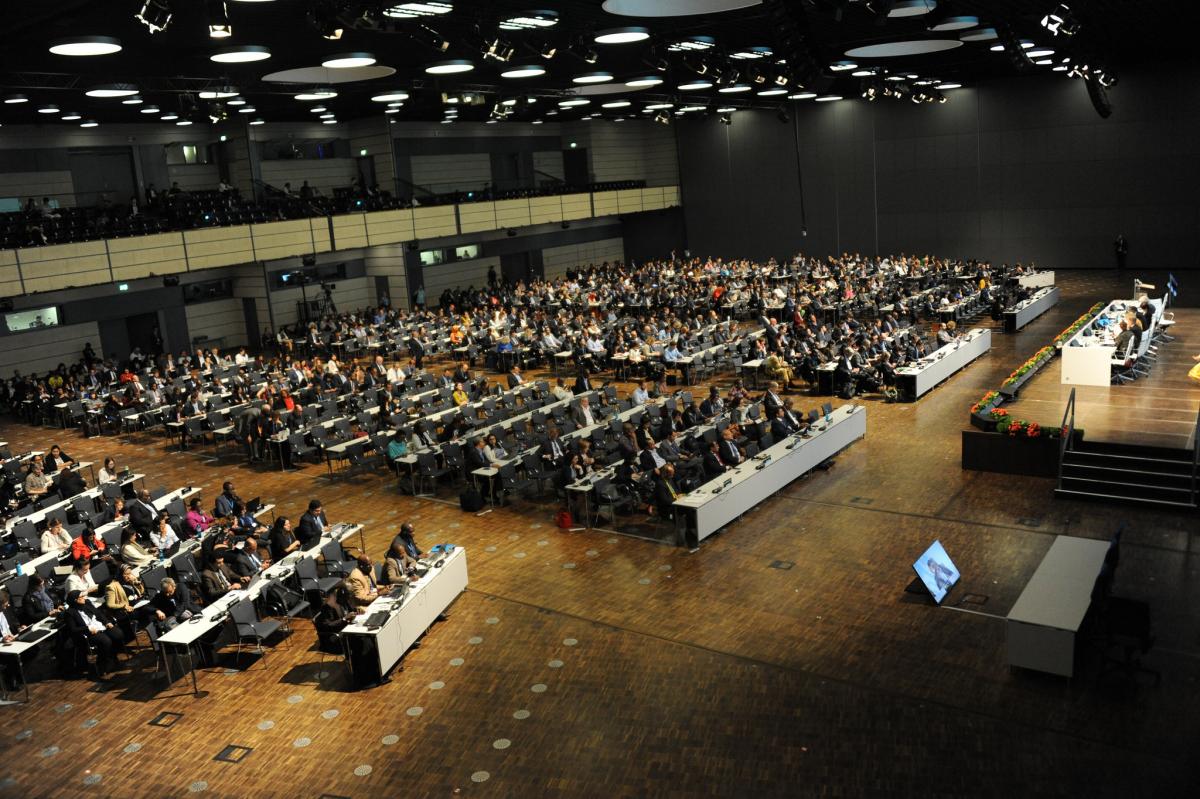 Closing plenary of the UNFCCC climate conference in Bonn. Photo - UNFCCC, 2018.
The climate talks in the city of Bonn failed to meet expectations they would deliver a draft rulebook for the implementation of the 2015 Paris Agreement. After eleven days of negotiations, an extra session in Bangkok is now planned in September to provide more time to discuss the huge number of technical details. Still, the German government says it is “moderately optimistic” that outstanding political issues could be dealt with at additional government meetings ahead of the final deadline at COP24 in the Polish city of Katowice in December. The German and Polish governments will jointly host a group of ministers at the Petersberg Climate Dialogue in Berlin in June as a first step to create the political backing necessary for a successful conference in Poland.

Negotiators in Bonn were able to keep the process of creating the so-called ‘rulebook’ to implement the Paris Climate Agreement from 2015 “on the right track”, said state secretary in the German environment ministry Jochen Flasbarth. However, it needed to “clearly pick up speed”.

Negotiators from more than 180 countries had gathered in the city of Bonn to work on the implementation of the landmark Paris Agreement, designed to limit global warming to well below 2°C. The main task was to prepare the so called “Paris rulebook” – the implementation guidelines for the accord – to be finalised at the next UN climate summit, COP24 in Katowice in December.

“We as the European Union went into the negotiations saying that we wanted finalised negotiating texts,” said a German government official after talks ended. “That was very ambitious, and we didn’t get that far.”

Negotiators in Bonn succeeded in “condensing” the “extremely long texts” they started with, filtering out key issues that still need to be tackled, said the official. “We learned that there is still a lot of technical work to be done, which is why we decided we need more time.” UN climate officials added an additional week-long meeting in Bangkok in September to the schedule, and the official said she was “relatively optimistic” that technical questions can be dealt with successfully.

Commentators said it was not a good sign that even the mere writing of the “manual for Paris” progressed so slowly. The UN climate conferences are often “overburdened with work on details, so that there’s too little room for the big questions,” wrote Joachim Wille in an opinion piece in Frankfurter Rundschau.

According to Rixa Schwarz, team leader of international climate policy at non-governmental organisation Germanwatch, the negotiators had laid the groundwork to decide robust implementation guidelines in Katowice, especially with the mandate to the chairs to work on the text in the meantime. “In Bangkok, however, negotiations have to be faster and more goal-oriented than they were in Bonn,” said Schwarz.

While the German official did “not expect a total gridlock at COP24”, political issues would be more difficult to solve. Recently appointed Polish COP24 president Michał Kurtyka made an “excellent impression” during the talks in Bonn, having approached all delegations “with a lot of tact and sensitivity”, the official said. The president oversees the running of the conferences and plays an important role in brokering compromises when deadlocks appear.

To help lay the groundwork for Kurtyka, several governmental meetings throughout the year will be used to create the necessary “political backing” for a successful conference in Katowice.

Germany and Poland will jointly host one of the first of such events with the Petersberg Climate Dialogue in Berlin in June. It is expected to drive forward the international debate on implementing the Paris Climate Agreement on a political level. Here, the German government plans to lay aside the technical details and work on the political momentum needed to implement the landmark accord.

On the one hand, this means ensuring that policymakers are aware that the real work is only beginning after the Paris Agreement, said the German official. Progress made on climate action has to be assessed and the countries’ action increased to reach the Paris Agreement goals. On the other hand, the meeting in Berlin would be used to make clear that a “robust rulebook” is necessary for the agreement’s implementation and to build trust among the member states, the official added.

A second government meeting, the Ministerial Meeting on Climate Action (MoCA) in Brussels in June, co-organised by Canada, China and the EU, will be used to discuss topics in which ministers need to bring clarity to more detailed issues surrounding the Paris Agreement.

Also on the agenda in Bonn were the kick-off sessions for the Talanoa-Dialogue, a new format of meetings that gather input from countries and civil society groups on how to advance climate change mitigation at meetings throughout the year, culminating in a report to the 2018 COP in Katowice that should inspire countries to raise their climate targets. The Talanoa meetings are known to be less formal and helpful in breaking down barriers between government representatives and campaigners, where “everybody talks to each other like people, not like parties.”

The German official described the Talanoa setting as “emotional” and an overall “very positive experience”. Through the dialogue – a welcome break from the negotiation sessions – countries now understood better “that we’re all in the same boat, and we can master the challenges only together”.

The Talanoa-Dialogue focused on the fact that the governments needed to make their national climate protection plans more ambitious, wrote NGO Germanwatch. Otherwise, the Paris goal of limiting global warming to below 2°C would be out of reach. This was a “key question of survival” for many of the world’s poorest nations, wrote the organisation.

Other German NGOs also called for more political commitment to make sure Katowice would become a success. Countries with high CO₂ emissions, like Germany, have to “urgently implement additional measures” to reduce them, said Sven Harmeling, Climate Change Advocacy Coordinator at CARE International. Additionally, an urgent top-up of funds for climate protection and adaptation for the global south were necessary to really limit the negative effects for the people and the environment.

Taking place not far from Germany's largest brown coal mine, the talks in Bonn highlighted the fact that the German government – while advocating for international climate protection – remains under pressure when it comes to its own climate and coal-burning record. No or little headway is being made in the emissions from the transport and building sectors, leading to Germany very likely missing its 40 percent CO2 reduction target for 2020. Germany has not yet managed to phase-out the use of CO2-intensive coal power. There are daily skirmishes between the federal government, state governments, opposition and civil society groups about who should participate in a so called “coal commission” tasked with deciding how and when Germany will end coal power production. [For more details, read the article Germany gears up for official talks on coal phase-out]

Germany’s domestic shortcomings in climate protection were not a main topic of discussion in the technical negotiations, said the German official. “Despite all the challenges we’re facing on a national level, our serious efforts continue to be acknowledged. Our commitment in the area of climate finance and our support to developing countries regarding their implementation of national plans continue to be emphasised.”

For more reporting on the climate conference in Bonn, see the CLEW article Germany wants transparent global climate reporting to ensure trust and read the coverage of Climate Home News, as well as this overview of the conference outcome by Carbon Brief.