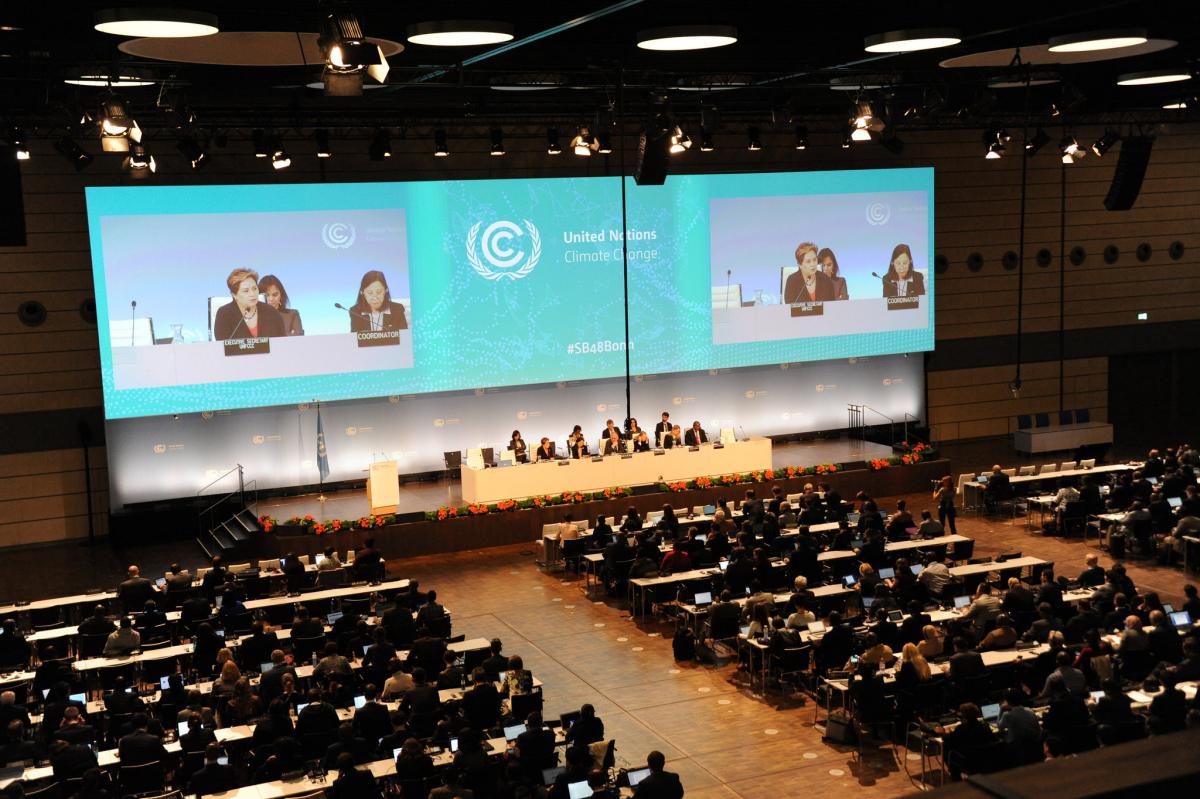 Opening plenary of the UNFCCC climate conference in Bonn. Photo: UNFCCC, 2018.
Negotiators from 184 countries gather in the city of Bonn from 30 April to 10 May to work on the implementation of the landmark Paris Agreement, designed to limit global warming to under 2°C. The German government is a longtime proponent of tough and reliable transparency and reporting rules to ensure international comparability of climate action efforts, and the new environment minister says that these rules can help to build trust among states. At home the new government faces gridlock in important questions, such as a coal exit and a CO2 price.

As the city of Bonn, near Germany’s largest brown coal mining pits, is hosting another large climate conference, the preparatory meeting for the next UN climate summit, COP24 in Polish Katowice at the end of the year, the German government again has to manage the balancing act between furthering climate change mitigation at an international level while battling stagnating greenhouse gas emissions and policy deadlock at home.

Around 3,000 delegates from 184 countries gather in Bonn from 30 April to 10 May to prepare the so called “Paris rulebook”, the implementation guidelines for the 2015 Paris Agreement that compels all signatories to the target of keeping global warming to less than 2°C (or even 1.5°C).

States have committed themselves under the Paris Agreement to reduce emissions, adapt to existing effects of global warming and, in the case of industrialised countries, how much money they will contribute to financing climate action in poorer countries. “The targets have been set, but the rules not yet,” Jochen Flasbarth, Germany’s head negotiator of many years and state secretary in the environment ministry, said in an interview this week.

“These rules have to be robust, so that all countries can implement the Paris Agreement and track what other countries are contributing. This is how states can build trust in each other and know that each of them is not alone in pursuing ambitious climate action,” Germany’s environment minister Svenja Schulze said this week.

Also on the agenda in Bonn are the kick-off sessions for the Talanoa-Dialogue, a new format of meetings that gather input from countries and civil society groups on how to advance climate change mitigation at meetings throughout the year and culminates in a report to the 2018 COP in Katowice which should inspire countries to raise their climate targets.

A third topic will be loss and damage and climate finance, in particular how developed countries are planning to pay the promised 100 billion dollars for the fight against climate change and adaptation to developing countries as of 2020. “There remains a vast gap between the support needed and support received,” said Gebru Jember Endalew, chair of the Least Developed Countries group.

If the 25,000-participant COP23 (Conference of the Parties to the United Nations Framework Convention on Climate Change) in Bonn last year was a “dull” working conference, tasked with hammering out the nitty-gritty implementation details of the Paris Agreement, this intersessional meeting is even more of an experts-only gathering. Yet behind the technicalities hide crucial decisions about how countries measure emissions, report them and how they conduct and track their mitigation efforts so that they are transparent for all other parties of the agreement.

As usual in climate policy, everything is connected with everything: The Talanoa-Dialogue is designed to find out what needs to be done to actually keep global warming from exceeding 2°C, because the efforts announced by countries so far are not sufficient. But without knowing the implementation rules, countries won’t step up ambition because they don’t know for sure what they are getting into. And the way rich countries handle their responsibility in loss and damage and climate finance influences the readiness of developing nations to support tough evaluation and transparency policies in the rulebook.

Until now there has been no concise document for the Paris rulebook, not even one with many different wording options in brackets. So in Bonn, delegates have to speed up the process and come up with a draft rulebook that can be finalised in Katowice in December. Nevertheless, the conference in Bonn couldn’t really fail because its objective wasn’t a completed document, state secretary Flasbarth explained. “But we can make it more or less easy for the next conference and I hope that negotiators in Bonn will do everything to prepare the texts so that it won’t get too difficult in Katowice,” he added.

During a visit to Poland this week, environment minister Schulze promised to push for an early round of ratcheting up global warming mitigation ambition (before 2020) by all parties in Katowice. But at home, advancing Germany’s own long-term plan to become largely carbon neutral by the middle of the century has in many respects hit a wall.

The power grid expansion necessary to distribute renewable electricity from producer to consumer centres is delayed, the development of renewable power sources has slowed down and no or little headway is being made in the emissions from transport and building sectors, leading to Germany very likely missing its 40 percent CO2 reduction target for 2020. Highlighted by the working lignite mines near Bonn, Germany has not yet managed to phase-out the use of CO2-intensive coal power. Instead there are almost daily skirmishes between federal government, state governments, opposition and civil society about who should participate in a so called “coal commission” tasked with deciding how and when Germany will end coal power production. Chancellor Angela Merkel’s government coalition is also torn about the introduction of a national price on CO2, which would help to reduce emissions from all sectors.

“The coal commission should present an ambitious exit plan by autumn this year so that the last coal power plants can go offline by 2035,” said Oldag Caspar, head of German and European climate policy at NGO Germanwatch.

Flasbarth said Germany was a trustworthy negotiating partner and can showcase some parts of its Energiewende (energy transition) – the dual move away from nuclear power and fossil fuels to an economy largely based on renewable energies – as positive examples.

He said that in the international negotiations, Germany had to talk honestly and openly about its difficulties, for example the continued use of coal and regions in Germany that are economically dependent on the mining business, but could also present its share of 35 percent renewable in power consumption as an achievement.

For daily reporting on the climate conference in Bonn, see the coverage of Climate Home News.