Germany will increase the share of renewable energies in its transport sector to 28 percent by 2030, the government cabinet decided today, agreeing on draft legislation proposed by the environment ministry. The greenhouse-gas reduction quota is designed to increase the use of biofuels in liquid transport fuels as well as promote the build-up of e-car charging infrastructure. [Updates with additional statements from opposition party and NGO]

The German government has agreed on the a path to increasing the use of renewable energy in the transport sector in the next ten years, aiming for a share of 28 percent renewables in the sector by 2030.

The German target is twice as high as the EU goal of 14 percent, meaning the country is opting for a “very, very ambitious” plan, environment minister Svenja Schulze said at a press conference. She added that this is necessary due to Germany’s failure to reduce emissions from the transport sector since 1990.

According to the greenhouse gas reduction quota, mineral oil companies are obliged to reduce emissions from their fuels by using climate-friendly energy products such as advanced biofuels, green hydrogen or electricity, with the quota of these rising from 6 percent at present to 22 percent in 2030. The new legislation specifies which types of renewable fuels can be used to meet this quota and to what extent. While the share of advanced biofuels (fuels from residues such as straw and manure) is to increase from zero to at least 1.75 percent by 2030, the share of biofuels from food and feed crops will be frozen at the status quo of 4.4 percent. The use of palm oil in the tank (which currently makes up 20% of biofuels used to meet the quota) will be phased-out by 2026.  “We don’t just blindly want more alternative fuels in the tank. I want to promote fuels that are efficient and affordable and that protect the climate without destroying nature,” Schulze said.

To get the use of renewable fuels in the aviation sector off the ground, the law includes a quota for e-fuels for planes for the first time ever. Another novelty is the use of renewable electricity in e-cars as a way to meet the greenhouse gas reduction quota. Suppliers can buy certificates for renewable electricity from charging point operators; these will be counted three-times to achieving the quota. “This is intended to indirectly involve the mineral oil industry in the operation of the nationwide charging infrastructure,” the ministry said in a press release.

This has been criticised by the biofuel industry because “it makes climate action look like it’s happening where it is not,” Elmar Baumann, managing director at the Association of the German Biofuels Industry (VDB) said in a press release. Since biofuels currently represent up to 98 percent of renewable energy in road transport, and millions of combustion engine cars will remain in use for the next 10 years, biofuels should be regarded as the “most significant contribution” to greenhouse gas reduction.

Georg Nüßlein, deputy head of the CDU/CSU parliamentary group in the Bundestag, said the greenhouse gas reduction quota should focus on fuel emissions, as e-mobility is promoted in many other ways.

The German Energy Agency (dena) also criticised that “multiple crediting dilutes real greenhouse gas savings”. The government’s law is including the “necessary steps” to increase the renewables share in the transport system by 2030, they said. However, whether the directive will be sufficient to make the necessary contribution to the current greenhouse gas reduction targets of minus 40-42 percent in the German transport sector remains questionable, dena said in a press release.

Anton Hofreiter, head of the Green Party parliamentary group, said the environment minister should not be celebrated for presenting “just two percent fuel from green electricity for aircraft within the next nine years as a success”. He also called for a swift ban on palm oil in the tank.

Brussels-based NGO Transport & Environment criticised the plan, arguing that biofuels from food and feed crops will continue to play too prominent a role, as will palm oil which is being phased-out too late by the German government.

The German greenhouse gas quota legislation is based on the EU’s Renewable Energy Directive (RED II). The draft still needs to be passed by the federal parliament, which is expected to introduce changes before a coalition majority approves the act before the summer break. 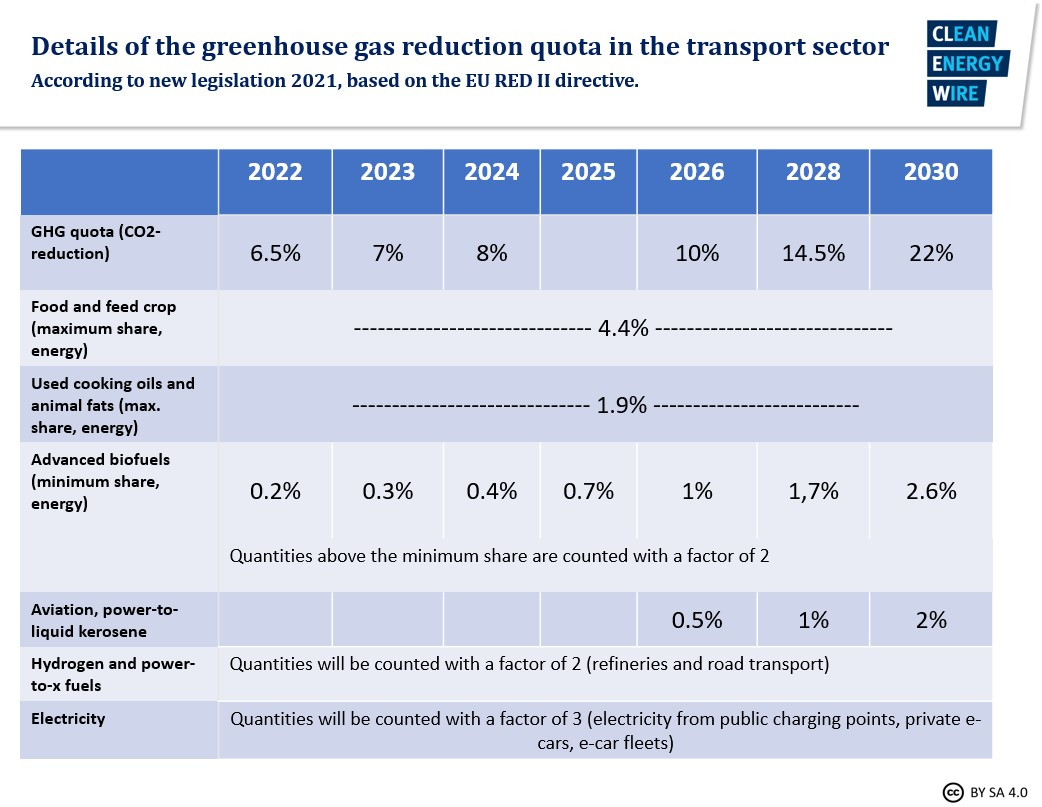