Germany’s federal parliament has approved a controversial revamp of the country’s energy transition. The government coalition of economy minister Sigmar Gabriel’s Social Democrats and Chancellor Angela Merkel’s Conservatives secured a majority vote for the fundamental reform of the Renewable Energy Act (EEG). The EEG is the main mechanism behind the Energiewende, Germany's sweeping transition to renewable energy.
The reforms will expose renewables to market forces by introducing competitive tenders, which the government says are necessary to lower costs and get a better grip on the expansion of green energy. But critics fear the changes will put Germany’s climate targets out of reach, and also shift the energy transition from a collective effort into the hands of big business.
Because of pressure from parliamentarians, the government coalition added some last-minute changes to the reform this week. Citizen energy projects must participate in renewables auctions from next year, but they will automatically receive the highest feed-in tariff accepted in the tender. Other changes include the option to shape more favourable conditions for so-called tenant power models. These allow apartment building owners to supply their tenants with power from rooftop solar PV facilities without paying the full renewables surcharge.
The parliament’s upper house, the Bundesrat, also approved the reformed law.

The new EEG which takes effect in 2017, received mixed reviews from stakeholders. The German Wind Energy Association (BWE) said the law would be a big challenge for the sector and criticised the limitation on wind power expansion in the so called “grid congestion zones”. The German Offshore Wind Energy Foundation warned that the new EEG was endangering value creation and jobs in the offshore sector by limiting expansion corridors. Energy efficiency association DENEFF called the new law a “bitter setback” for energy efficiency because energy-intensive industries would receive so many privileges that energy efficiency measures would not be an attractive option for them. Greenpeace Germany said that the country would need more power for electric mobility and heating in the future, so more renewables were needed – instead the new EEG was slowing down the energy transition by putting in place an “untested auction system” and “arbitrary harassment of wind power”. The Cologne Institute for Economic Research (IW Köln) said that the move to auctions for renewables was a step towards “a little more market focus” in the energy transition – but not enough. Costs could have been reduced even further by not giving each technology its own auction contingent, but by introducing technology neutral tenders.

See an energy ministry press release and further government information on the reform in German here.

For background on the reform, read the new CLEW dossier The reform of the Renewable Energy Act and the factsheet EEG reform 2016 – switching to auctions for renewables.

For more details, read the factsheet Defining features of the Renewable Energy Act (EEG) and the article Auctions to set the price for wind and solar - the debate).

Despite a new advertising campaign, efficiency measures in Germany aren’t successful, particularly in the building sector, Michael Bauchmüller and Benedikt Müller write in the Süddeutsche Zeitung. In order to achieve its climate targets, the country would need to reduce the use of heating oil much more than is currently the case, energy expert Hans-Joachim Ziesing told the paper. One reason for the slow gains in efficiency is the low price for heating oil which means that house owners have no incentive to invest in more efficient heating facilities. Another is the confusing number of different support programmes offered by local and state governments.

Preliminary figures published by the Energy Charts tool of research institute Fraunhofer ISE show that renewables had a share of over 36 percent in net electricity generation in Germany in the first six months of 2016. 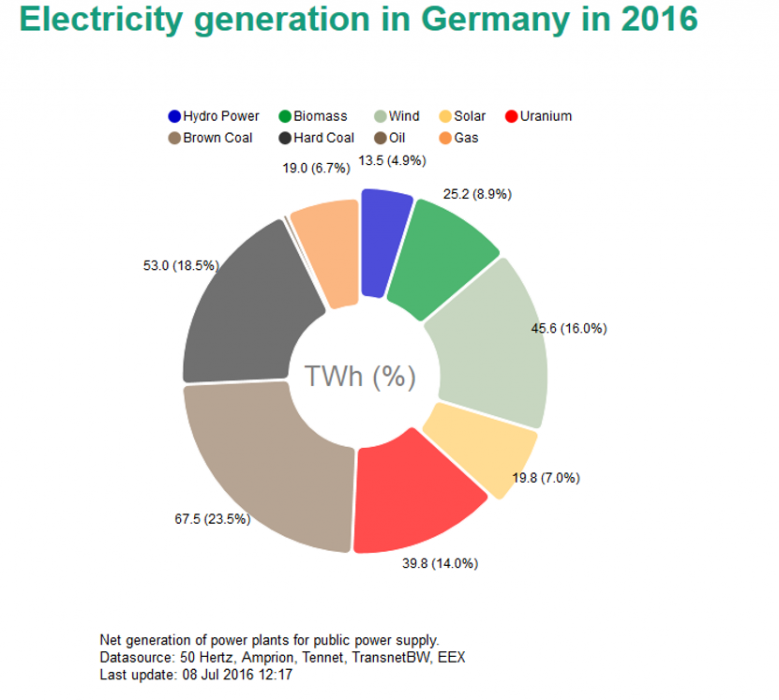 The deputy heads of the conservative CDU and CSU parties in parliament say that environment minister Barbara Hendricks' Climate Action Plan 2050 draft fails to take account of the market, innovation and competitiveness and could endanger “the economy, prosperity and social peace” in Germany, according to a letter to the Chancellery which was seen by the Frankfurter Allgemeine Zeitung. According to the four politicians, this was tantamount to a path to “a planned climate economy”.

Read a CLEW article on the latest changes to the Climate Action Plan 2050 draft.

German energy utility RWE, which employs a around 14,000 people, is earning less money due to falling power prices and will therefore cut around 2,300 jobs in Europe, 1,600 of them in Germany, dpa reports. By 2018 RWE Power wants to cut annual costs amounting to 1.5 billion euros.

German car manufacturers have invested in many measures to make their manufacturing process more climate and environmentally friendly and are saving money with these programmes, Spiegel Online reports. Since 2006, VW’s increased resource efficiency has saved the company over 158 million euros, it said. Between 2006 and 2020, BMW wants to reduce resources needed to build one vehicle by 45 percent, and when it comes to CO2, a 46 percent reduction has already been achieved, a spokesperson said. But despite all progress during production, driving cars is still the biggest source of  CO2 emissions which is why VW is putting new emphasise on electric vehicles, the article says.

“In the end the customer pays”

Katherina Reiche, managing director of the municipal utility association VKU wants the government to establish better conditions for local utilities and keep an eye on the cost efficiency of the energy transition and security of supply in Germany, she told Der Tagesspiegel in an interview. Introducing several reserves to secure power supply was leading to more regulation and less competition. In the end the customer would pay for it, Reiche argued. Regarding the digitalisation of the energy transition, e.g. by introducing smart meters, Reiche called for local utilities to run these new data systems, instead of establishing a new parallel structure run by transmission grid operators, as the government currently plans.

Local financial benefits of a community-owned wind farm are eight times greater compared to one run by international firms, a study by the Institute for Distributed Energy Technologies (IdE) has found. International firms give fewer contracts to local service providers, don’t use local banks and do not operate the windfarms themselves and don’t provide investment opportunities, the researchers found.